The first time I’m introduced to Maya Penn over email, I’m informed that she is a 21 year old environmentalist, who’s been in the activism space since she was eight years old. At 28 years old, I’m fairly sure there’s nothing I’ve been doing for eight years, besides maybe breathing, so I’m already impressed. She’s also an artist, animator, sustainable fashion designer, author, Ted speaker and sustainability consultant. So, when we finally chat over Zoom I’m so intrigued to hear about how all her various pursuits have influenced her thoughts about climate justice. Pretty positively it turns out. In her warm Southern American accent she reiterates “I’m a climate optimist but it’s still hard because of how much global leaders and local leaders are really scared to shake things up… which really sucks. But I’m going to keep advocating for it.”

As someone who works to amplify young people’s views and experiences, I hear time and time again how tackling climate change is their top priority. Maya believes that this passion has it a lot to do with young people’s lived experiences. “Generations like Gen Z, we’re one of the first who have noticeably experienced climate change at a global level. Extreme weather changes for example. I live in Georgia where we already have crazy tornado seasons but they are getting dramatically worse. Every year is the hottest year on record!”. These lived experiences, combined with better opportunities for sharing information, such as social media also really helps. “We have newfound access to information at a younger age than any generation before us, which has allowed us to absorb information at a quicker rate and share that information quickly as well”.

Part of this new absorption rate is making information more accessible and digestible. Maya herself plays into this with her own animation company, which at its core believes that creative, engaging methods of education about climate change and justice are key to getting as many people as possible on board. “I create stories about socio and/or environmental topics that are still entertaining. Accessibility to information isn’t just about if you can Google it. That information also needs to be demystified for people so it can educate and empower young people. Instead of information causing young people to be like “woah what is this topic with so many layers to it, never mind’,” we need it to inspire them to get involved”.

Whatever the format, one of Maya’s biggest focuses is sustainability. It can be a bit of a corporate buzzword these days, a greenwashing tool used by businesses to allow them to appear more ‘green’ than they actually are. I ask Maya what she thinks living sustainably actually looks like. “Everyone’s sustainability journey is a little different, but I think it’s really about supporting small and local businesses, the companies that have always had sustainability at their core. It’s also about extending the lifespan of what you already have by sewing and mending your own clothing, using the food in your fridge, and seeking out pre-owned second hand items. Ultimately it’s about reframing our relationship with the things we own. Right now we aren’t making our own products, growing our own food… We’ve kinda lost that natural ability to learn how to be stewards to the earth”.

It’s great for us to know that there are actions we can take as individuals to protect the planet, but many people have been questioning why there’s such a big emphasis on individual behaviour rather than bigger structural or policy change. Maya is adamant that policy change is important too, and is so closely tied to the racism that has caused BIPOC communities to disproportionately suffer from the impacts of climate change. “I’d love to see more implementation of climate reparations. This entails the Global North taking responsibility for the environmental atrocities they’ve committed and helping the global south as well as BIPOC communities in the global north.” Naturally, Maya also advocates for land reclamation for Indigenous people. “Indigenous people are protecting 85% of the biodiversity of plants and animals in the US, so it’s so crucial for people to remember this. It is Indigenous communities who are providing solutions. Their culture needs to be protected and not exploited.“

Land reclamation and the honouring of tradition come hand-in-hand for Maya. While it is Black and brown communities who suffer the most from climate injustices, the knowledge and solutions to the climate crisis often come from within these communities themselves. She says, “BIPOC people have so much traditional ecological knowledge, so many solutions already within their communities.” As an African American, she says her journey to sustainability came by honestly.  “My earliest memories are me and my mum shopping at thrift stores and shopping for second hand clothing, or playing in an organic garden as that’s what her mom did,” she recalls. “When my dad was a teenager, he was creating solar energy projects for science fairs and getting awards from NASA for them.” It is this level of innate eco-consciousness within BIPOC people which Maya believes is underrepresented in the movement, yet there is an urgent and practical need to uplift these voices.  And it’s not about ‘wokeness’ or diversity, Maya says – it’s a “necessity, because of the vital history BIPOC have of being stewards to the earth in many different cultures.”

Western colonialism and racism are key drivers of the environmental destruction we are seeing today. Yet whiteness has also staked its claim at the helm of the mainstream environmental justice and sustainability movement. . It’s no secret that BIPOC views haven’t been platformed in the same way as their white counterparts, which Maya explains is deeply problematic. “Because BIPOC are most affected by environmental issues, their lived experiences of environmental racism and climate migration need to be heard.” As a Black woman in environmental activism, Maya knows she has to police her behaviour more closely. “All these activists get their fair share of flack anyway, but we see the younger white activists yell at these world leaders and they get applauded for being “passionate”. I know I could never do that as I’d come across as ‘the angry Black girl’ or ‘violent’. Me and so many other BIPOC youths couldn’t have had that same response”.

The last few weeks have been particularly nerve wracking for Black Americans, with the  murderer of George Floyd being found guilty. Whilst the result was a relief, what does it really mean for anti-racist movements, including the climate justice movement, looking forward? Maya says: “It’s only a turning point if allies understand that this is just the beginning. The verdict doesn’t bring George Floyd back, and his family is affected by this forever. There are so many other Black and brown people who have never received justice.” She rightly underscores the role of Darnella Fraiser who filmed Floyd’s murder. “We wouldn’t have had this outcome if it wasn’t for the documentation done by Darnella Fraiser, who was only 17 years old. We wouldn’t have gotten anywhere near this close without her. Of course the marches made an impact, but she was the catalyst for all this really.”

It feels fitting to end our conversation on the difference a brave young Black woman has made, and her role in a monumental movement for change. I hope we’ll continue to do more to platform voices like Maya’s in our fight to save the planet. 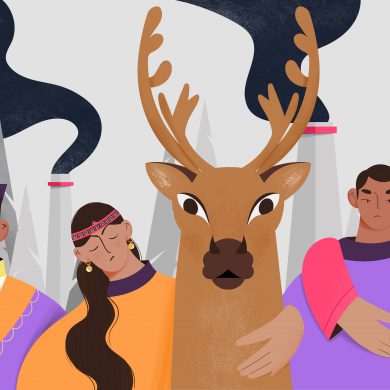