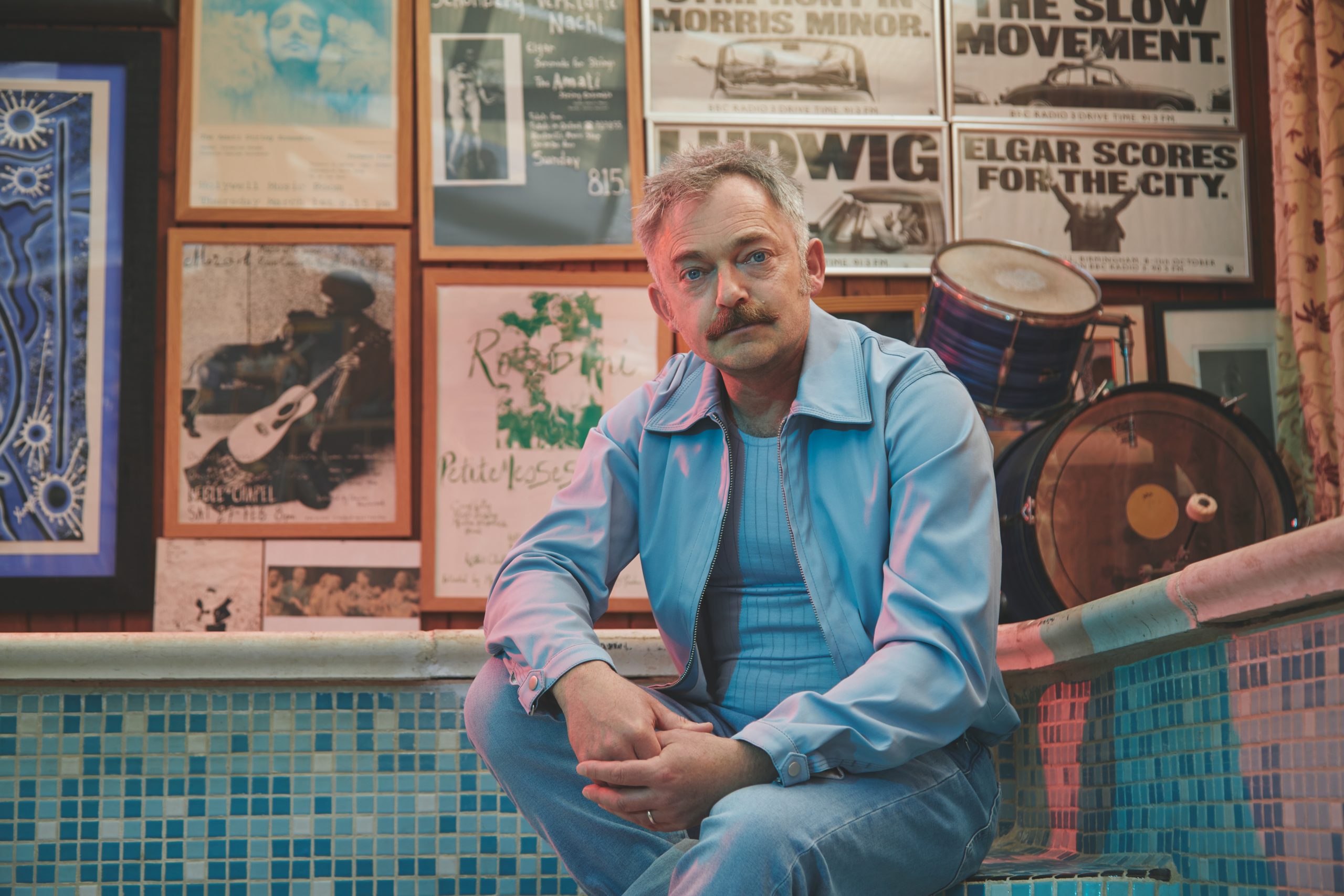 Charles Hazlewood feels most at home in a swimming pool. “I’m the happiest I’ve ever been”, he tells me, as he takes me on a Zoom tour around his house.

Instead of water, however, the empty pool found in his new home is filled with an organ, a grand piano, towers of score music and a dizzying range of synths. “Why would you want an actual pool in England?” Charles justifies.

Charles’ 35 year career veers wildly from chorister, to punk drummer, to conductor. He’s spent his time airport hopping and working with top musicians from around the world. But when COVID-19 hit and the industry was brought to an abrupt halt, Charles found himself still for the first time.

This unexpected time and space offered a new frame of mind for Charles. “My pool has always been a space for contemplation, making music of course too, but it’s typically where I cook up ideas, or ruminate on things and I was sitting here, in the middle of the night – because I’m a bit of an insomniac – burning incense and making drone music, and my life pivoted in the most glorious direction”.

Charles realised that he only wanted to work with one orchestra for the rest of his life, one which he formed himself: Paraorchestra, the worlds first professional orchestra of disabled and non-disabled musicians. He said goodbye to his agent and directed all of his creative energy into his genre-defying 21st century orchestra.

“The idea to found Paraorchestra started to percolate when my daughter was diagnosed with cerebral palsy”, he explains. “By that point I’d conducted orchestras around the world and in the thousands of musicians that I’d met, I couldn’t think of a single one that had a disability, and I thought: ‘well that’s just plain weird’.”

So, Charles formed Paraorchestra, with the aim of having the orchestra debut in the closing ceremony of the London 2012 Paralympic games.

“I saw the Paralympics as such a visionary example of shifting perceptions of disability” Charles explains as the reason he wanted to link Paraorchestra with the games. “People wouldn’t watch the Paralympics if it was disabled people just ‘having a go’, people are interested because it’s world class.”

Another more personal reason for setting up the orchestra, aside from wanting to prove the fact that the UK was wasting world class talent, is that it came at a time when Charles was also coming to terms with his own trauma. “Memories started to resurface of when I was sexually abused as a child”, he says. “My own abuse, which gave me my own share of what I’d describe as disabilities, made me realise that I’m more comfortable surrounded by other people with differences”.

“I felt wrong”, he explains, discussing his experience of classical institutions he was a part of, like Oxford, “not whole like the other shiny people around me. Since I founded Paraorchestra it has become the most complete and comforting home I’ve ever found. It’s actually been the making of me, never mind anyone else.”

Discussing the orchestra’s debut at the Paralympics, I ask Charles if he was nervous when it came to the closing ceremony, and he explains that despite this embryonic orchestra’s first performance ever being in front of hundreds of millions of people, his rage replaced any potential butterflies.

“15 months prior to the show I was running around like a missile, bouncing from 10 Downing Street to The Department of Media and Sport with my idea, and I kept getting the same reaction. I could see in their eyes that while they outwardly said ‘oh wonderful’, none of them believed that an orchestra of disabled people would be any good. And I just got more and more furious”.

The barriers faced by disabled musicians

Despite his already illustrious career Charles faced incredible barriers to setting up the concert. “I felt so insulted that people thought I was doing a community project to make everyone feel warm and fuzzy”, he explains. “Fuck that, I’m not here as a therapist, I’m here to make world class music”. Despite all the odds however, the performance went ahead, full of endorsements and even involving the indie band Coldplay. Charles explains that often the biggest barrier disabled musicians face, is actually the limited imaginations of those around them.

“Often disabled musicians are given lowbrow, boil in a bag music to work with”, says Charles. “This moves us further away from a solution because people are just able to reinforce their prejudices that disabled people don’t make good musicians, which as we know is an absolute pile of steaming horseshit. Paraorchestra has only become a real force for change because of the art we make.”

Illustrating the short-sightedness of exclusive orchestras he continues: “And let’s not forget the rich spectrum of sounds available to us when we embrace those musicians who use assistive technology to make music. Assistive tech opens a new door and allows us to be innovative, strengthening and diversifying our pallette of sound. That’s incredibly exciting.

“One of the founding members of Paraorchestra is an astonishing musician called Clarence Adoo,” Charles offers as an example. “He was one of Britain’s leading trumpet players until he had a car accident and was paralysed from the neck down. He eventually met visionary instrument maker Rolf Gelhaar, who created the instrument Headspace for Clarence.”

Clarence has now moved beyond playing the trumpet and can actually play almost any instrument by activating the technology through blowing into a straw and moving his head.

The power of electronic music

Because of this, and Charles’ own passion for anything electronic, Paraorchestra are more open to experimentation than other traditional orchestras, using electronic instruments to play all kinds of music, taking inspiration from JS Bach to Pauline Oliveros to Barry White.

“My issue has always been to do with why the orchestra stopped evolving in the mid 19th century” Charles tells me. “The last permanent instrument to formally join the orchestra was the tuba in about 1840 – you show me any other phenomenon in life which hasn’t continued to grow, adapt and respond to new technologies and ideas. The orchestra has almost gotten stuck being the custodian of tradition and looking back only, never looking forwards.”

Through Paraorchestra, Charles has proven what can happen when an orchestra decides to innovate. Charles tells me about one of his favourite memories when he was conducting Paraorchestra during Glastonbury in 2016.

“It was the year that Bowie died and we did an astonishing symphony by Phillip Glass based on Bowie’s iconic Heroes album,” he describes. “It was midnight on the Saturday, we were playing in a sodden field at full capacity. Think about how broken everybody is at that point in the festival, but during our 45-minute set you could hear a pin drop. That was a moment.”

Paraochestra’s latest achievement is featuring in a new documentary on Sky Arts. Articulated by Charles, Reinventing the Orchestra looks at the role orchestra can play in the modern age, discussing how it can serve and fully integrate all sections of society.

“If you believe that music is our greatest universal language, by extension the orchestra should be the biggest reflection of that.” Charles says, explaining why he wanted to make the documentary.

“If you look at a picture of a symphony orchestra from 50 years ago, how many women do you think there would be?” he asks me. “I hope that in 20 years people will think it’s as absurd to not have a mix of genders as it is to not have an orchestra which is an evolved mix of every kind of marginalised community. Not because it’s ‘the right thing to do’, but because they’ve all got such riches to add to the equation”.

Charles is well known for bringing new audiences to orchestral music, performing an orchestral rendition of video game theme tunes at London’s Barbican Centre with the hopes of attracting new people to the form. I ask him about what else needs to change to ensure that the audience of orchestral music continues to diversify.

“Inevitably, one follows the other,” he says. “The more the orchestra refreshes itself and becomes generally closer to being a reflection of modern society, then of course more of modern society will become interested in what it’s doing. It’s that simple.”

Another barrier which Charles outlines is the fact that attending an orchestral performance can be intimidating. “Concert etiquette has grown to a point where it’s strangled the music. It’s almost become more important than the form itself.” says Charles. “Not knowing how to behave, when to clap… it all makes people feel deeply uncomfortable. Human beings are very tribal, so those that do know the code want to keep it to themselves, they want a private members club, this is part of the reason we don’t move forward.”

This stigma and mystique is what Reinventing the Orchestra will try to tackle. “The orchestra is the largest force of musical expression and you find it everywhere – TV, Film, Video Games. My hope is that people watching will recognise its influence on and relevance to everyone.

After all, music is way bigger than any dialect, so the idea that some people should claim the orchestra and keep it for their own is absurd.”

For Charles, contrary to those who want the orchestra to remain exclusive, orchestra is actually all about community. “If you look at it, it’s the most perfectly evolved form of teamwork that exists. A football team has 11 players, a rugby team has 15. An orchestra can have as many as 100 people on stage and they’re all working in perfect synchronicity. While there’s discipline in that there’s also almost infinite freedom. For every single one of those musicians, they bring their particular uniqueness to bear. And that is unparalleled in any other aspect of human life that I can think of.”

Speaking to Charles and reflecting on his dynamic career, it’s evident that this is a man that refuses to take things at face value. Whether that’s spurning the exclusionary state of orchestral music in the UK or choosing to fill an empty pool with instruments, this is a man who can visualise change, and importantly, strives to make it happen.