The best thing that I could see during my set is a bunch of girls on the dancefloor, gassing each other up

In February 2020, shado hosted Build Love, Break Walls, a two-week residency in celebration of LGBT History Month. As part of the exhibition, we spotlighted 12 of London’s LGBTQI+ changemakers. shado’s Managing Editor Erin Cobby sat down with one of these changemakers, Cesca Ivaldi, to find out more.

On a weekend, you’d normally find host and DJ, Cesca Ivaldi (Lil C), dancing around behind the decks at a party, creating feel good vibes and playing her patented “delightful mix of dancehall and reggaeton”. You’d therefore think that for a DJ who brings that level of confidence and enthusiasm to her sets, lockdown would be a personal kind of hell. However, it seems you’d be mistaken. To some extent, Cesca is actually welcoming this downtime. She explains: “I’m not grateful for this situation, obviously, as loads of people’s health is in jeopardy, but the only upside now is that there’s no parties to go to, so I don’t need an excuse of why I don’t want to go”.

She continues saying that just before the outbreak of COVID-19 she had “this guilt, there were too many things to do, too many parties to be at, I arguably just had too much stuff on”. At the end of last year Cesca decided to ramp things up a notch, go part time at her day job at a record label and dedicate more of her time to broadcasting. Seeing as this manifested in two radio shows, playing countless parties and belonging to not one but two in demand collectives (BBZ London and Prestige Pak), it’s no wonder she’s savouring this break.

“My mum is a pilates guru don, she’s been banging on at me for ages that I should do pilates and she’s finally gotten me into her cult”, she laughs, explaining how she’s been spending part of her time during lockdown. However, it’s not exactly like she’s been taking time off, regimenting her week so that Monday is for listening to all the new music that came out over the weekend, Tuesdays are for meetings and Wednesdays are spent prepping, producing and presenting her weekly radio show on Reprezent with Prestige Pak.

She’s also started some new projects, including creating a dreamy isolation mix for gal-dem. She says that the idea behind the mix was to “have moments that allow you to have a little cry, but also where you can be like ‘fuck it, na, we’re gonna have a lovely little bop and sing and dance around.” It seems that this idea was a success, with many people reaching out and letting her know that they really listened to it. “You can get used to doing these things purely for the sake of doing them, but as a broadcaster, you want people to be listening. Everyone’s always like: ‘you love radio because you love the sound of your own voice’. But that’s not the point. Does a radio show even happen if no one’s listening?” She laughs, “You can tell I’ve been waking up, stretching, then getting lean by 12 o’ clock. I’ve got too much time on my hands and I’m thinking about the deeper questions in life.”

Despite the success of her quarantine projects, this move to solely online isn’t something Cesca’s really used to. She explains that as she’s so “inner”, when Filth, a New Zealand based group which aims to ‘decolonise the dancefloor’, approached her to do a live as part of their online festival, she initially just wanted to send in a pre-recorded mix as she didn’t really understand the concept. “I would never go on a live, I’d get bored in three seconds and switch off, so it was weird getting messages like: ‘I’m watching your live’, I was like: ‘oh cool, … why?’.” However, after some initial weirdness, especially as the timezone change meant performing at a strange hour, she got into it, especially the donate function.“It feels like super camgirl energy, but I’m kinda into it”, she says. I ask her jokingly if the tips prompted her to show a bit of shoulder. “I considered it,” she replies. “Next time I’m gonna be in my panties, fucking giving it all that. Do a bit of sexy dancing.”

Apart from allowing her some breathing space, Cesca also tells me she thinks COVID-19 might afford London nightlife some much needed space also. Although cancelled tours and gigs are proving extremely problematic for many artists and their crews, Cesca admitted, she says it might encourage people to appreciate what they have. “We were teetering on a point where nightlife in London was quite homogenous. People would just say: ‘I’m just going to XOYO, I’m just going to Plan B, (lol RIP), I’m just going to Phonox. Like you’re just going to a place, you’re not going for any particular reason.” She explains that from her experience and that of friends, often pressurised situations create the best scenes. “As people have been restricted they might start having a newfound appreciation for going out. It might breathe a bit of life back into UK nightlife. Encourage people to care about the music they’re seeing rather than just going out for the sake of it, or just to say that they went.”

Cesca’s always been interested in the sociological intersections of music, having written her dissertation on the power that music has to breach social and racial divides. She focused on the elitism which comes with certain art forms; how the average person is well aware of Bob Marley, but completely oblivious to Edna Manley. “I looked at music as being this tangible medium which brings people together. You can own it, you can buy it, you can put it in your house. It’s not something that’s locked up in a gallery that you have to pay to go and see.” Comparatively, she used her Grandmother’s stories of being accepted as a Jamaican immigrant by sharing aspects of her culture; that despite the ‘fear of the other’ that was prevalent in the UK at the time, neighbours would say: “oh I love the music that you play on this loud sound system – and your food is fucking delicious”.

Our chat turns to whether music has this role of unification in our current society. We use the example of the proliferation of grime and drill and the power these genres have had to partially increase tokenism and alienation. “Hella middle class white kids want to be roadmen because of how cool they think drill and grime is,” she says, “but people just take the surface, they don’t listen to a Headie One track and go: ‘wow, this guy really is trapping on the road, thank fuck I don’t have to do that’.” However, we land on the fact that this is a specialist case and music, especially it’s proliferation on the internet, can still be extremely inclusive. As Cesca says, for the queer person in the middle of Arkansas, “you go onto Spotify and you can find your people, hear things that allow you to have a sonic home, despite not loving your physical one”.

Cesca also personally understands the power of music, having had it save her from a degree which was otherwise quite unfulfilling. She explains that: “university was slightly underwhelming for me, in terms of the amount of time you had to just go out, hang or bun a zoot and talk shit in someone’s kitchen. I needed stimulation; I was actually quite depressed looking back at it.” Because of this, she combined her love for music and performing into weekly broadcasting, and initially learnt to DJ just so that her shows would be smoother. She explains that it just spiralled from there, badgering local DJs to teach her (and getting turned down) and playing the odd set at a night until people started saying: “‘yo, you are hilarious and not even that shit at djing, why don’t you DJ at our party?”. This snowballed into forming Prestige Pak, a four person collective which has the ethos of: “if you’re going to do something, do it in a prestigious way. It doesn’t have to be financially balling out, just in whatever way you interpret the word of prestigiousness. Live that.” Cesca is now also part of BBZ London, another collective which aims to create safe party spaces for queer and non-binary people of colour. She states that it was performing in these arenas which made her aware of the value of them, the necessity of having “somewhere that you can feel safe and happy shakin ya booty”.

So, whether you manage to catch Cesca solo or as part of a collective, you can expect a few things from her set. Music that makes people, but especially womxn, feel bossy and empowered. She explains that when looking out from the decks:

the best thing that I could see would be a bunch of girls on the dancefloor, having a great night out with each other, gassing each other up, singing Beyonce but also whineing along to the latest dancehall tune. That’s my dream set up, that’s the music I’m playing, to make that happen.”

For now however, it seems Cesca will have to make do with reading comments on her Instagram lives, to get her “kicks from watching other people have fun”, as she calls it. That is, of course, until party season can begin again, something which Cesca will apparently have to be dragged to. 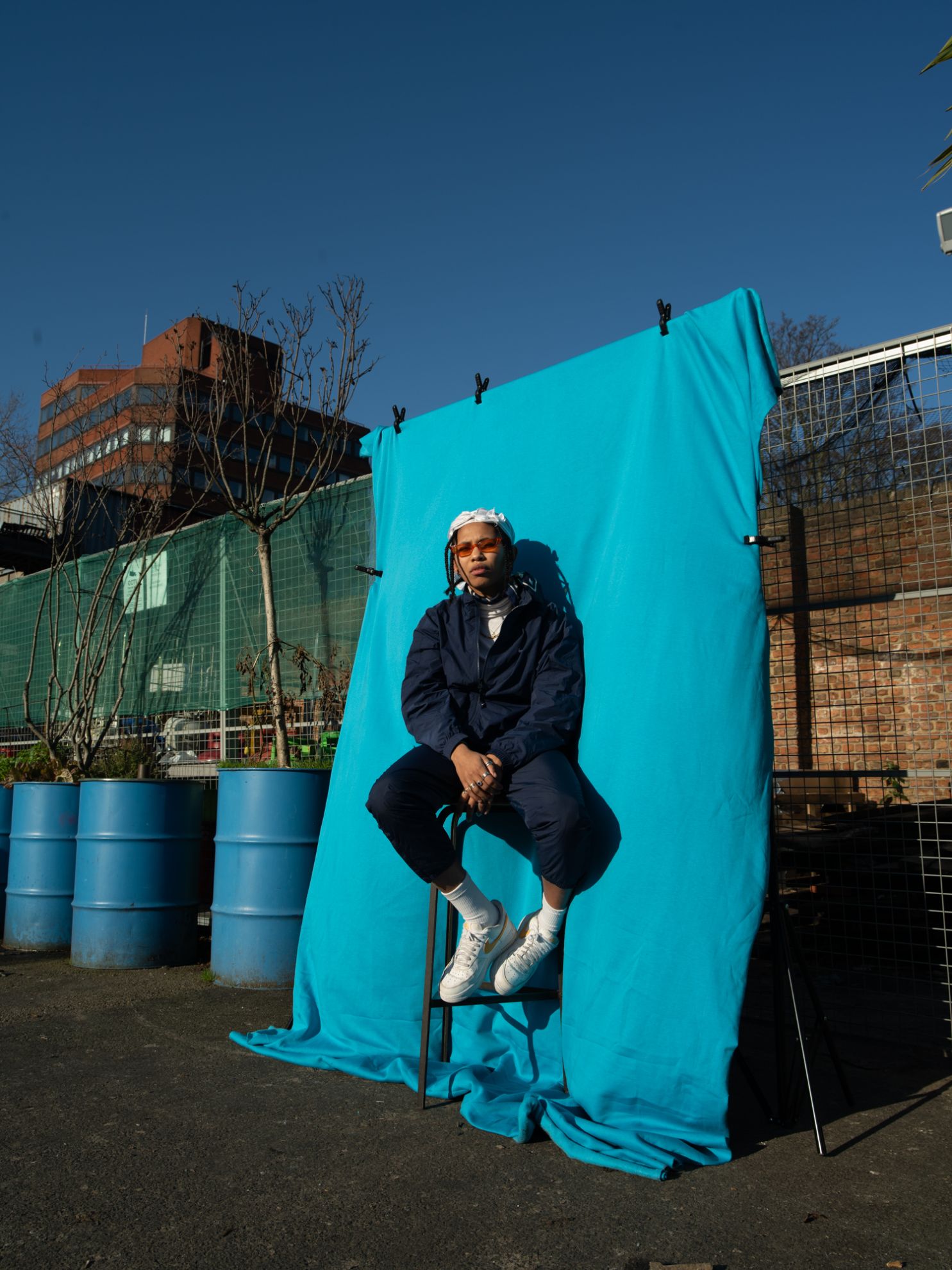 Follow Cesca on instagram @lil_clart Born and raised in South London, DJ and broadcaster Lil C combines a potent mix of Bashment and a love of global pop music with classic R&B, Reggaeton, Afrobeats and contemporary UK rap, capturing the sound of the transatlantic diaspora. Quickly making a name for herself as a formidable selector, her skillset has taken her to the world and back and her name is now one of the first on the list of DJs spinning for the best parties around.