Leeroy New is a 36-year old Filipino artist and designer who uses plastic and other discarded materials in his practice. As a young Filipina climate justice activist, I decided to talk to him about the environmental crisis that plagues our climate-vulnerable country and the systemic injustices that have led us to this planetary emergency. We share our fears and hopes around both the climate crisis and the political climate in our country.

A study from 2021 shows that the Philippines is the largest contributor to ocean plastic pollution in the world.

The responsibility of this lies with large multinational brands who have been selling products in sachet-form to the vast population of economically marginalised Filipinos that can only afford these small packets.

In order to create art from materials that are familiar to the everyday Filipino, and knowing that large scale art pieces can generate a lot of waste, he sought to challenge himself by only using plastic and surplus materials.

“I started using plastic in the Philippines because I was seeking out what was available. Instead of traditional art materials like paint and canvas, I actively set out to use what people were familiar with to come up with a visual language that was drawn directly from our material culture.”

Leeroy remarks that this is second nature to us as Filipinos, explaining, “this is drawn from the Filipino cultural sensibility of not throwing things away, of transforming your trash into Christmas decorations and fiesta costumes. We see this everyday.”

Although he knows that recycling won’t solve climate breakdown, Leeroy wanted to use this opportunity to send a message about the urgent waste crisis that is plaguing the Philippines.

Leeroy explains: “I’ve always wanted to push my work to go beyond merely representing or visualising something. I want my work itself to attempt to provide a solution to, or address, in a practical sense, the concerns and issues we are currently facing,”

The culture of Filipinos to transform what others may deem as trash into art for festivities shows that the waste crisis isn’t caused by the lack of individuals’ desire to recycle, but really the overproduction of plastic and the lack of systemic recycling centres.

Like the climate crisis, the waste crisis is also a systemic issue. If we look at it closely, we can see that the fossil fuel industry is behind them both. Multinational companies are producing excessive plastics which in turn produce harmful chemicals and aid in climate breakdown.

Both crises are caused by a profit-oriented system that prioritises the economic growth of the extremely wealthy and privileged over the quality of most people’s lives.

Growing up in the small city of General Santos, Leeroy didn’t have a lot of traditional inspiration for art. Instead of art books and visits to galleries, he was inspired by illustrations, playing cards, and sci-fi movies.

Leeroy tells me that he was never really drawn to what was conventional and mainstream. This is evidenced by his choice to become an artist in the first place, as it’s not the normal pathway Filipino children are expected to take.

On this Leeroy said, “you really have to be stubborn as well and insist on it so that they support you.” I share this sentiment with him as a full-time climate justice activist who has also chosen to walk the path less travelled.

It takes courage to think outside of the boxes and divert from what has been laid in front of us. Drawn in by the alternative futures so different from the world we’re seeing in the Philippines, Leeroy became inspired to create his own fantastical worlds. “I had to be resourceful in seeking out my sources of  creativity,” he explains. “I loved the idea that I could be involved in  creating imagined beings and imagined worlds.”

His decision to make his art not only represent issues in our society, but also help us to imagine a world where issues are resolved, stems from an accumulation of experiences. “My fascination with building worlds, coupled with my collaborations with different specialists, urban planners, environmentalists, those in the creative industry and activists coalesced. All these intentions came together and I tried, and continue to try to integrate and marry all these intentions together to be able to create something practical.”

We see this in Leeroy’s recently created fantastical piece with Somerset House in the UK. He created three ship-like structures in the courtyard made of bamboo and different materials he sourced from the recycling centre.

Entitled the Arks of Gimokudan, the three ships float in the air, making the viewer feel like they are underwater when looking up at the installation, but also, since the ships are overturned, it’s also as if they’re viewing the ships from above and the sky is the sea.

Each ship looks different but they all have frames made of bamboo with different discarded plastic in different colours surrounding the bodies of the pieces, moulded into alien-looking shapes.

Leeroy has learned to be flexible and to problem solve on the spot with the different materials that are available to him. He remarks: “Waste in developed countries looks very different – where the Philippines has a lot of discarded plastic bottles, in the UK I had to work with large plastic tubs and CDs. I even had to ask for direct donations for bottles!”

On the political nature of art

At the time of speaking to Leeroy the political climate in the Philippines is tense. We ask each other how we’re doing and are both unsure of how to answer. There’s a hesitant chuckle shared between the both of us.

Marcos Jr., the son of the former dictator of our country 50 years ago, has cheated his way to power as President. Standing alongside him as his Vice President is Sarah Duterte, the daughter of our current fascist President. Their fathers are on record as two of the Philippines’ worst presidents in terms of human rights and environmental abuses.

We are at a critical point where we are in drastic need of genuine climate leadership that will prioritise the people and the planet. However, both Marcos Jr. and Sarah Duterte have a track record of stealing, lying, and putting their political agenda above human rights, which leaves us in dangerous territory.

“If you have an unstable society and government, how will environmental concerns be prioritised?” Leeroy asks.

In the Philippines, people are made to believe that environmental concerns are not an immediate threat, and that hunger and poverty are more pressing. But this is because politicians are failing to connect these issues. It’s the most marginalised peoples, who are affected by hunger and poverty that are also the communities most impacted by the climate crisis.

People often talk about the climate crisis as being just an environmental issue; that saving the planet is about saving the animals and trees. Through his work, Leeroy reminds us that it’s not just about nature. “We know that nature will survive in some shape or form, but it’s really us that we need to save, and this reality is intrinsically tied to our relationship with nature.”

Our survival therefore will be grounded in how we choose to relate to nature, not how nature relates to use – it will evolve and become an entirely new world long after humanity is gone.”

The role of art in transforming society

I believe that art cannot be apolitical and will never be neutral.

Leeroy remarks that art must aid in the transformation of our society. “Art is a means,” he says. “It’s an extension of yourself and it should reflect your values. Art is malleable enough to be able to be the vessel for the things you want to change in the world.”

“I’m continuing to  practise this idea of ‘world-building’ – physically manifesting these fantastical worlds through my means as a Filipino artist,” says Leeroy.

Inspired by the Indigenous Zapatista movement from Mexico, during mobilisations, climate activists often chant: “we are unstoppable, another world is possible!” and it is clear that Leeroy seems to be embodying this through his art.

Radical imagination is a powerful and important tool in activist spaces. It’s difficult to imagine a sustainable and climate just system when it’s so different from the one we have today, but we must practice imagining it and encourage others to do so as well.

We must show people what that other world looks like. We must create a better world in our mind’s eye. We can’t just be anti-imperialist, anti-fossil fuels, anti-extraction, and anti-injustice, without also being pro-people, pro-planet, pro-community, and pro-love and joy.

We must collectively dare to break the mould: to, imagine and create these alternative futures.

Just as Leeroy transforms discarded plastic and materials to build new imagined worlds, we will do the same with the unjust system that we have today and build a new world where no one is left behind.

Resources on radical imagination and using art for activism:

For Resources on sustainability and the plastic crisis: 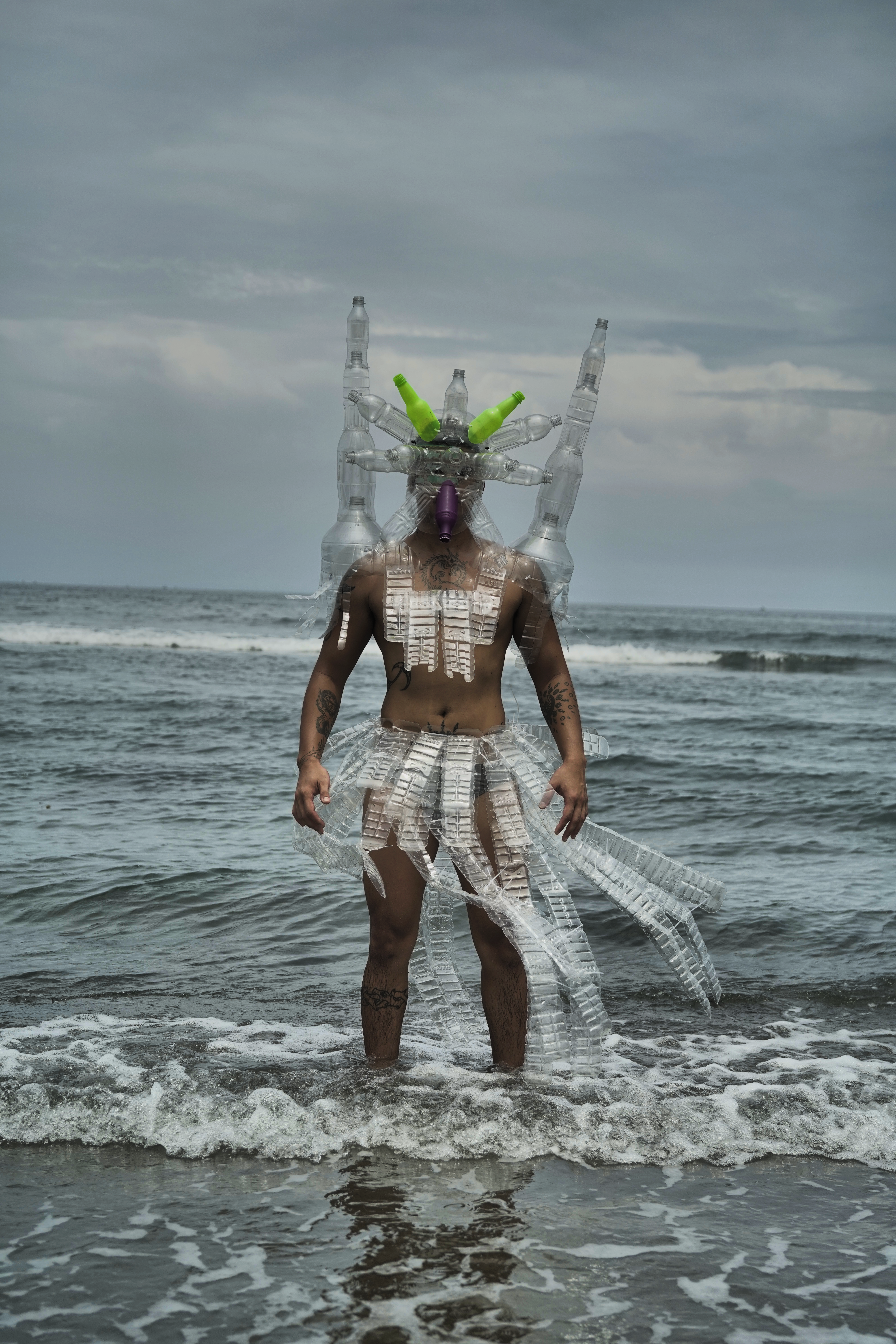 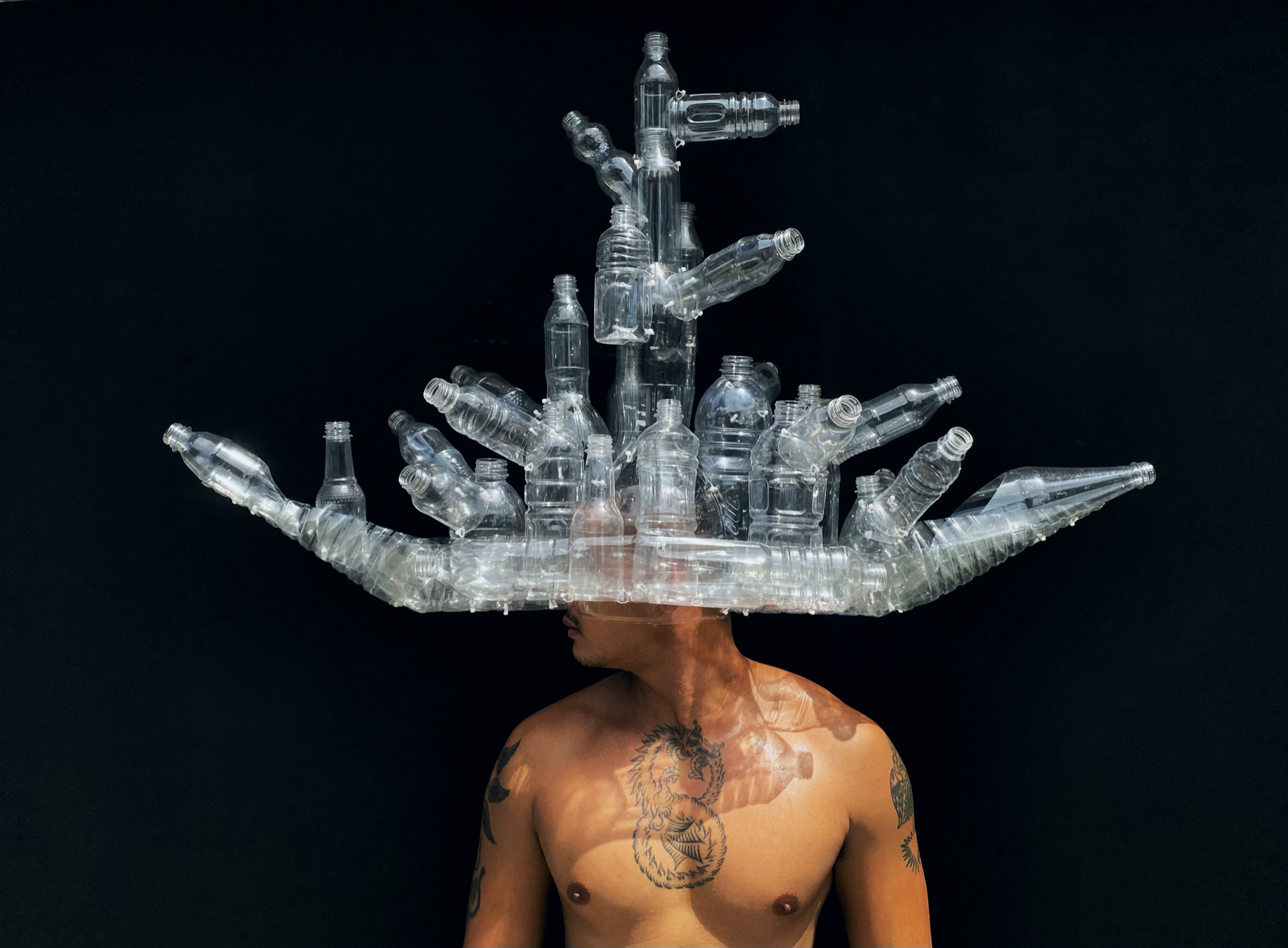 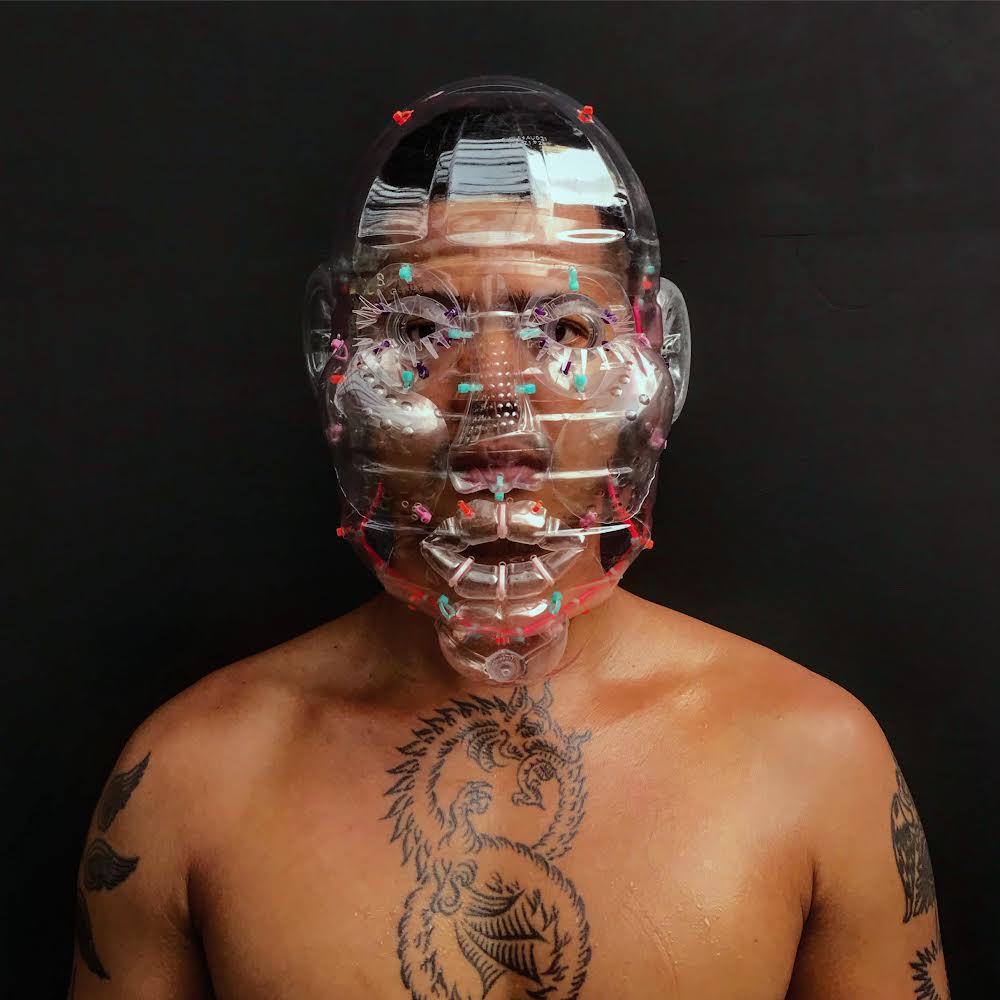 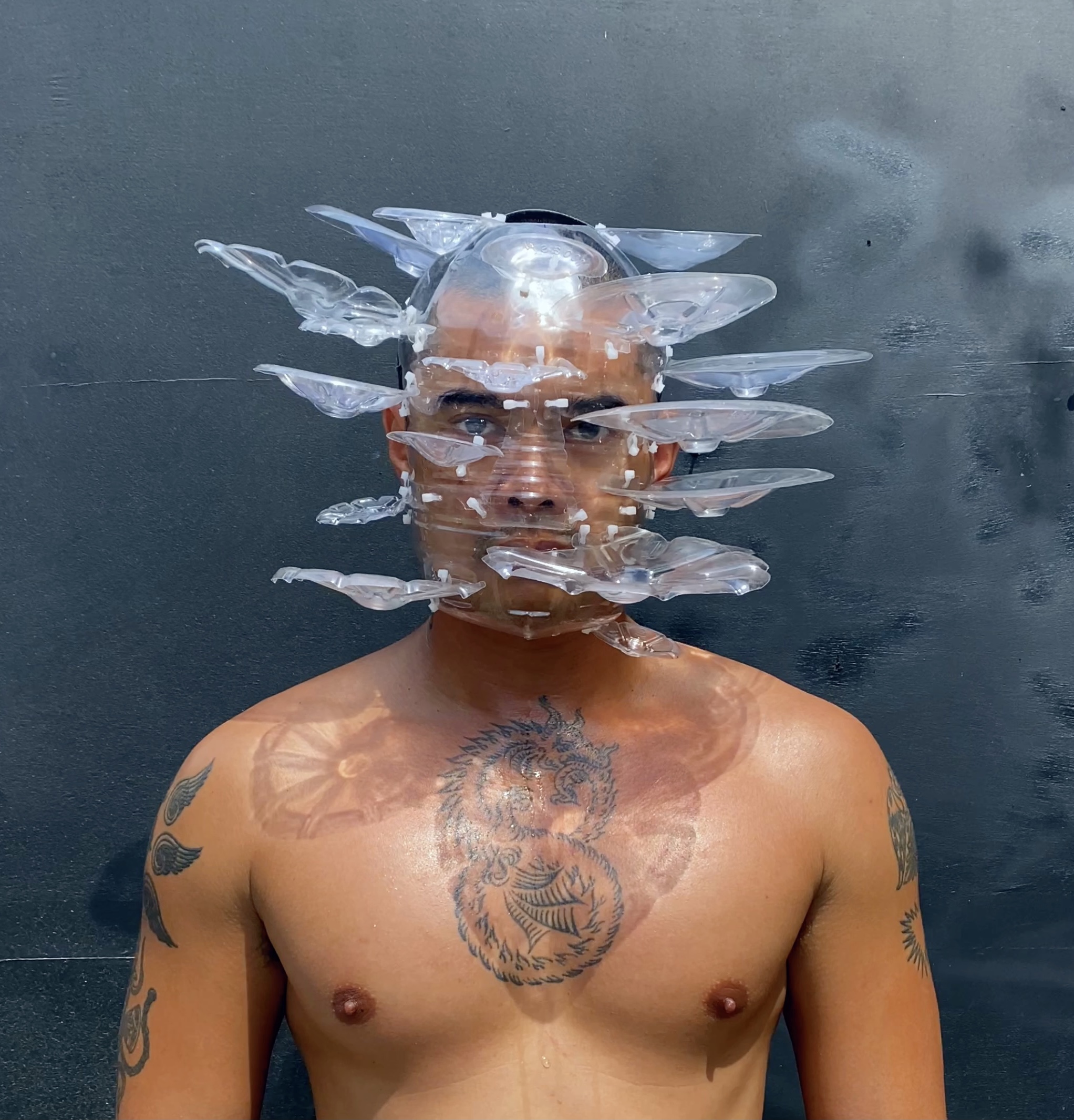 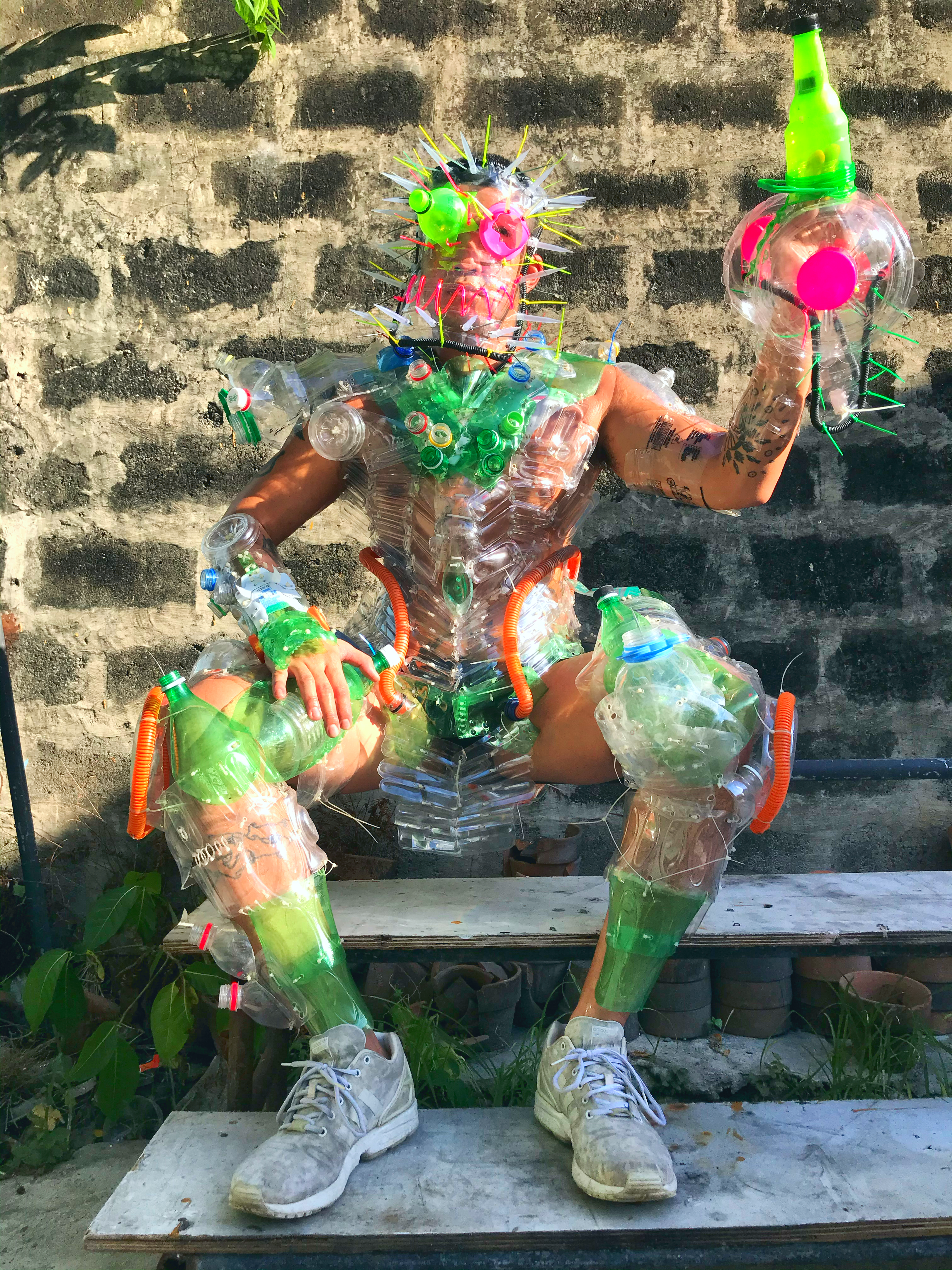