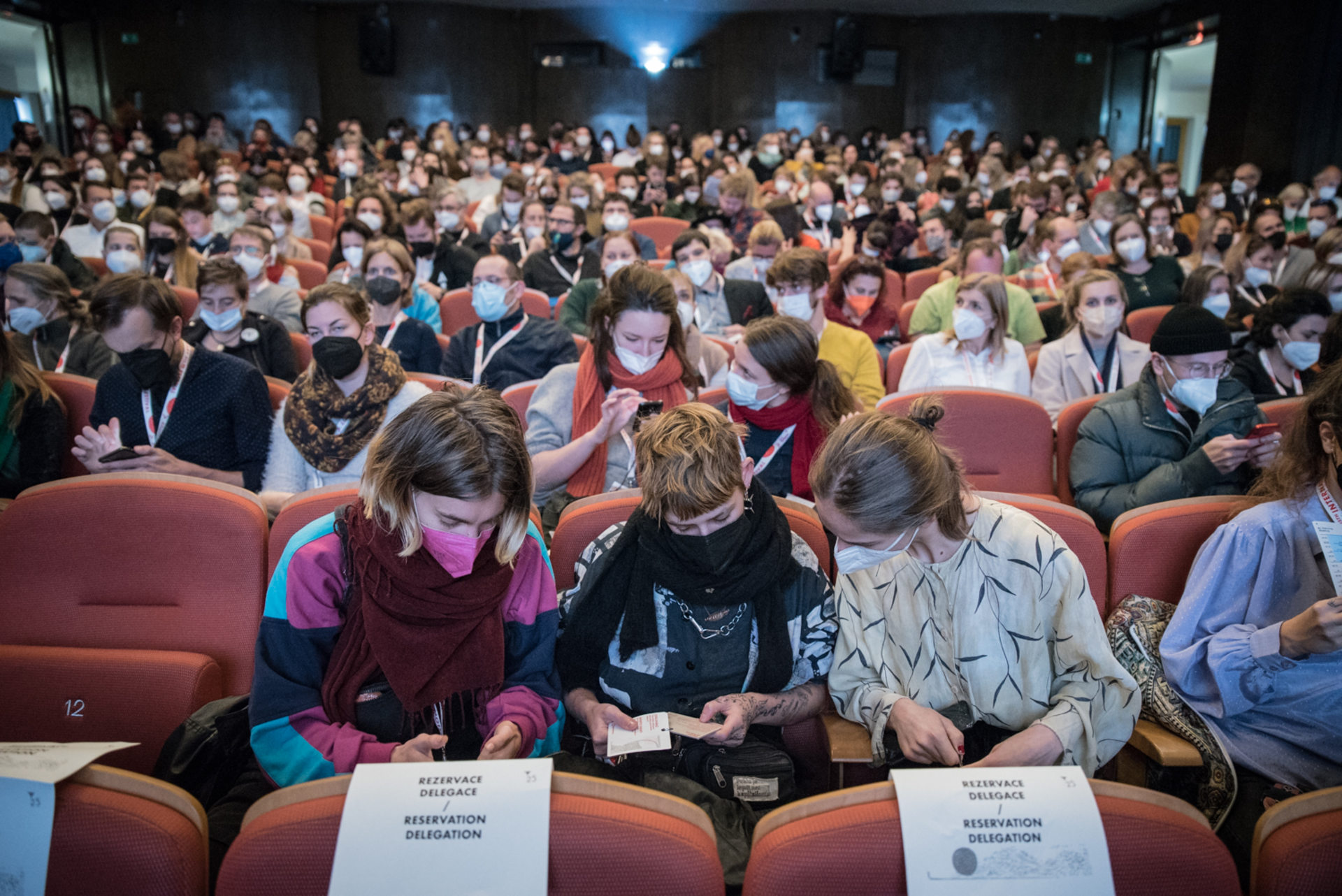 In the centre of the Czech Republic lies the small city of Jihlava: halfway between Prague and Brno, sat on the border between two historical regions, Bohemia (the larger, to the West) and Moravia (the smaller, to the East). It’s the last weekend of October, bright, cold and windy, and we’ve just arrived for the 25th edition of the city’s annual international documentary film festival, Ji.hlava.

Ji.hlava is an event that was conceived by a small group of local high school students in 1997, less than a decade after the Velvet Revolution and the collapse of communism in the Czech Republic. Now, 25 years later, the festival is widely viewed as one of the leading European documentary film festivals and the largest event of its kind in Central and Eastern Europe.

Ji.hlava’s many histories are written into the physicality of the city. The spacious, ornate central square, designed in the 13th century at a time of relative wealth – it was historically the largest silver mining town in the country – encircles a large brutalist building, constructed during the Soviet era (it’s now a department store complete with a McDonald’s).

The city’s buildings have borne witness to many events which have come to define present-day memory of the twentieth century. Many were formerly homes of Jewish families, deported and killed during the Holocaust. In the 1950s, the regional court became a venue for Communist show trials; in 1969, tradesman Evžen Plocek set fire to himself in the marketplace in a political protest.

The layered and complex stories of the town’s past are echoed in the breadth and scope of the festival’s programming: a diverse selection of non-fiction features, visual essays, experimental films, workshops and panels from contributors around the globe. In addition to its main competition section, the films are divided into four categories: ‘Fascinations’, for the best experimental films, ‘Testimonies’, for political, ecological or scientific stories, ‘Short Joy’ for short docs, and ‘Czech Joy’, the traditional national competition showcasing the best in Czech non-fiction cinema.

We spent three days in Jihlava, enchanted by the variety of inputs of the festival’s programming. But when it came time to choose our favourite films, it was quite clear for both of us which ones stood out. Here are our standout films from the selections:

How I Became A Partisan is the feature-length documentary debut of Roma director Vera Lackova, and her personal mission to trace the story of her great-grandfather, Ján Lacko.

Lacko was a partisan – a member of the Slovak anti-fascist resistance movement against the Nazi occupation and the collaborationist Slovak government. Roma partisans, however, have been scarcely remembered in histories of the Slovak National Uprising – a gap that Lackova has described as an “oblivion… basically a second death.”

Lackova uses her film as a vessel to build a full and nuanced picture of Romani culture, starting from the story of her own great-grandfather. Through the lens of her own family, and her journey to create a public memorialisation of the role Roma partisans played in anti-Nazi uprising, Lackova expands the wartime narrative beyond one of victimisation. As it unfolds, she goes into the complex and fragmented ways in which these violent histories impact descendants and reverberate around Europe 75 years on.

In the film, Lackova takes the audience on a path of discovery – both of her own family’s story, and the stories of four other Roma partisans she uncovers. We accompany her as she visits the site in the woods where her great-grandfather found the charred remains of his family, as she travels to the Museum of the Slovak National Uprising and fights for an exhibition explicitly dedicated to Roma stories, as she confronts the racism and indifference of strangers, and as she cooks, laughs and dances with her family.

Lackova is a compelling and diligent narrator, and the film is a delicate study of the ways the past is remembered and forgotten, and the role of community and family in breaking down prejudice and indifference.

Her work can be followed through her production company, MediaVoice.

The Machine Which Makes Everyone Disappear is a documentary which follows the work of Tinatin Gurchiani, a Georgian director and film producer, who portrays the life of young Georgians, their frustrations and dreams in a country affected by the Soviet legacy and an uncertain future.

The documentary starts at the casting stage. Gurchiani had advertised her movie as a film “about young people” in Georgia, open to anyone aged from 15 to 25. But both younger and older people showed up, so Gurchiani chose to expand her original parameters, curious to hear the stories of many.

The intimate feeling created gives the impression that the camera crew were flies on the wall. In an interview, Gurchiani reveals one that the crew didn’t understand Georgian, allowing them to go unnoticed to the point of disappearance in more emotional situations.

Through the protagonists’ stories, Gurchiani guides us into the struggles, concerns and ambitions of Georgian youth, four years after the war with Russia in 2008. The title quote is a testament to the harsh realities of life in the country. The film bears witness to their difficulties and hopes, with a light touch.

The film is available to watch here.

The festival was an incisive and varied display of contemporary Central and Eastern European cinema. From Anny, the story of a middle-aged sex worker from Prague, to Gorbachev. Heaven, a reflection on the life of the last president of the USSR, to Points For The President, a mosaic of opinions on the fragmentation of Czech democracy since 1989, the films dealt with the complex and often contradictory ways that modern life intersects with the past, on the edges of Europe and beyond.

The full catalogue, and tickets to the 2022 edition of the festival can be found here.