In February 2022, GLAAD – the media monitoring organisation published its annual ‘Where We Are on TV’ report. This analyses the state of LGBTQI+ representation and inclusion present in the scripted original series available on broadcast, cable and popular streaming services.

The findings of the TV report concluded that LGBTQI+ representation and racial diversity had reached “new record highs” compared to the previous year, which had seen a decrease in many categories due to the cancellations experienced during the surge of the Covid-19 pandemic.

Since the inception of the report, LGBTQI+ series regulars and lesbian representation on broadcast were at an all-time high, with streaming giant Netflix leading the way with their original series.

With the increasing focus on topics like diversity and inclusion, it indeed seems like a beautiful time for queer folks to find themselves represented on television. But do these impressive statistics translate to actually meaningful queer representation or, instead, are they characters who are just queer for quotas?

As the latest season of Netflix’s smash-hit comedy Never Have I Ever developed, I saw the series unfortunately fall into the latter.

Created by Mindy Kaling, the series chronicles the trials and tribulations of an Indian-American teenager, Devi Viswakumar, who chaotically waddles through normal high school dilemmas like romance, friendships, and managing the unattainable expectations of her aptly written Desi mother Nalini.

The Netflix original marked a trailblazing moment for its never-before-seen depiction of nuanced South-Asian representation in popular media. Although the first two seasons of the show were far from perfect, the portrayal of its messy main character Devi was appreciated and whole-heartedly welcomed by brown women who were tired of the cliché poised-Indian girl trope.

Watching a young brown girl being openly sexual on her own terms while being given enough depth to delve into her fractured relationship with her mother meant so much to me that I was willing to even ignore the problematic parts of the series.

And it wasn’t all so terrible. In the previous seasons, Sherman Oaks High’s resident robotics enthusiast, and one-third of Devi’s friend circle Fabiola, an Afro-Latina lesbian girl, explored her queer identity and growing relationship with her girlfriend.. So, there was some kind of representation of my queer identity, albeit not in a character of the South-Asian diaspora. 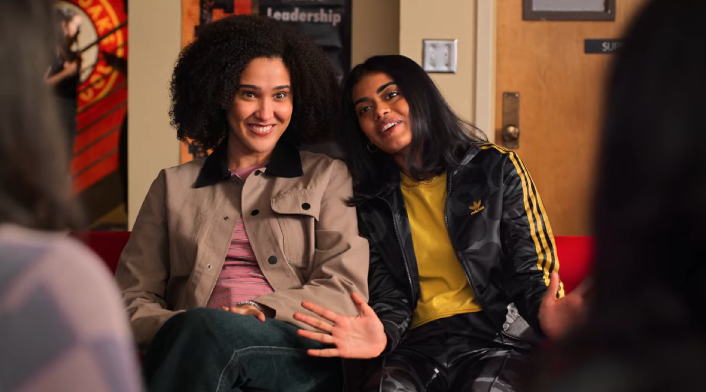 So, it was a complete surprise when an unexpected hope for queer representation broke out through the often unyielding clouds of South-Asian heteronormativity. Season 3 featured Aneesa – the show’s only Muslim-Indian character, accepting her queer identity as she dates Fabiola.

I felt ecstatic. A young woman of colour with marginalised identities was exploring her queerness in an interracial relationship. It seemed like the writers of the series were raising the bar by finally acknowledging the existence of queer people from the South-Asian diaspora.

With only a handful of opportunities to feel represented on-screen and a history chock full of tropes that either literally bury or make tokenistic caricatures of us, Aneesa’s existence resembled a miracle. The uniqueness of the narrative felt too good to be true as I dreaded the direction of her character development – something that all queer audiences are familiar with.

It felt like I had asked too much from a show known for its groundbreaking South-Asian representation and was in for a rude awakening. The unyielding clouds eventually proved their strength as she was sidelined and discarded into an abysmal oblivion from which she never journeyed back for the rest of the season.

I kept waiting till the last episode of season 3 in hopes of any redeeming qualities to Aneesa’s storyline to no avail and felt dejected. Reading the mostly positive reviews of the season felt like no one really cared about her, much like the writers of the series themselves. However speaking to others online about their perspectives revealed that I wasn’t the only viewer disappointed over the lacklustre approach of Aneesa’s intersectional identity.

“I really enjoyed seeing a brown teenage girl like Aneesa explore her sexuality similarly to how I did, but my biggest criticism is that I didn’t get to see her intersectionality explored”, says Ariana Bhargava, a queer writer based in Boston. “After her breakup with Fabiola, we pretty much stopped seeing Aneesa on-screen, which definitely disappointed me. It was apparent that the writers were trying to represent a certain demographic, one that I am a part of. But only seeing her short relationship didn’t explore her identity in a way that will make people like me feel genuinely represented”.

Never Have I Ever’s hesitancy to progress past the formulaic television writing to give us queer characters with actual substance ruined the potential that Aneesa’s queerness offered as her story was shelved and forgotten. What little cohesive inclusion the series featured in its previous seasons drastically declined as the penultimate season focused on only furthering the narratives of its protagonists in cishet relationships.

The exclusion, or rather, the ease with which racialised LGBTQIA+ characters are disregarded, is on par with the trend of queer stories being written with straight audiences in mind. It makes you wonder whether characters like Aneesa will ever get to be the main characters of their stories or merely exist as anecdotes to appease the morality of their heterosexual allies.

Vishie Betapudi, a 24-year-old medical student from Baltimore, MD seems to resonate with my thoughts too. “The relegation of queer characters to the background in media feels kind of par for the course to me. I think there is a conception that queer characters can only be the headliners if the work is a quintessentially “queer” story — some sort of coming of age in the face of cis-hetero patriarchal trauma. I find it frustrating that queer people, particularly queer Black, Indigenous, and people of colour, often see themselves on the screen as either sidekicks or battling through some of their most challenging moments in life.”

These reluctant and half-measured depictions of queer stories is the new variant of TV tropes that aren’t necessarily one-dimensional and tokenistic, but focus on queer representation in moderation. If a show like Never Have I Ever – praised for its representation refuses to give importance to same-sex couples stories, then where can we turn for authentic narratives of people with marginalised identities? Mainstream scripted shows and movies keep inventing unique ways to satisfy media reports such as GLAAD’s ‘Where We Are on TV’ while still centring the plot around heterosexuality.

Although queer representation on television may not necessarily translate to actual queer liberation, witnessing various LGBTQIA+ shows being cancelled one after another this year alone is a painful reminder of how queer stories aren’t given a fighting chance to push the limitations of the entertainment industry’s LGBTQIA+ storytelling landscape.

When shows like Never Have I Ever feel hesitant to devote significant screen time to their queer characters and are praised for their bare-minimum LGBTQIA+ representation – it sets a terrible precedent for the future of lighthearted, untold queer themes. LGBTQIA+ characters on television – where any form of their queerness is assigned a backseat and their character arcs progressed as off-screen plot points, can never be considered as meaningful representation. Despite the hopeful and shining numbers reflected on the yearly GLAAD reports.

Articles to educate yourself about queer representation in media: