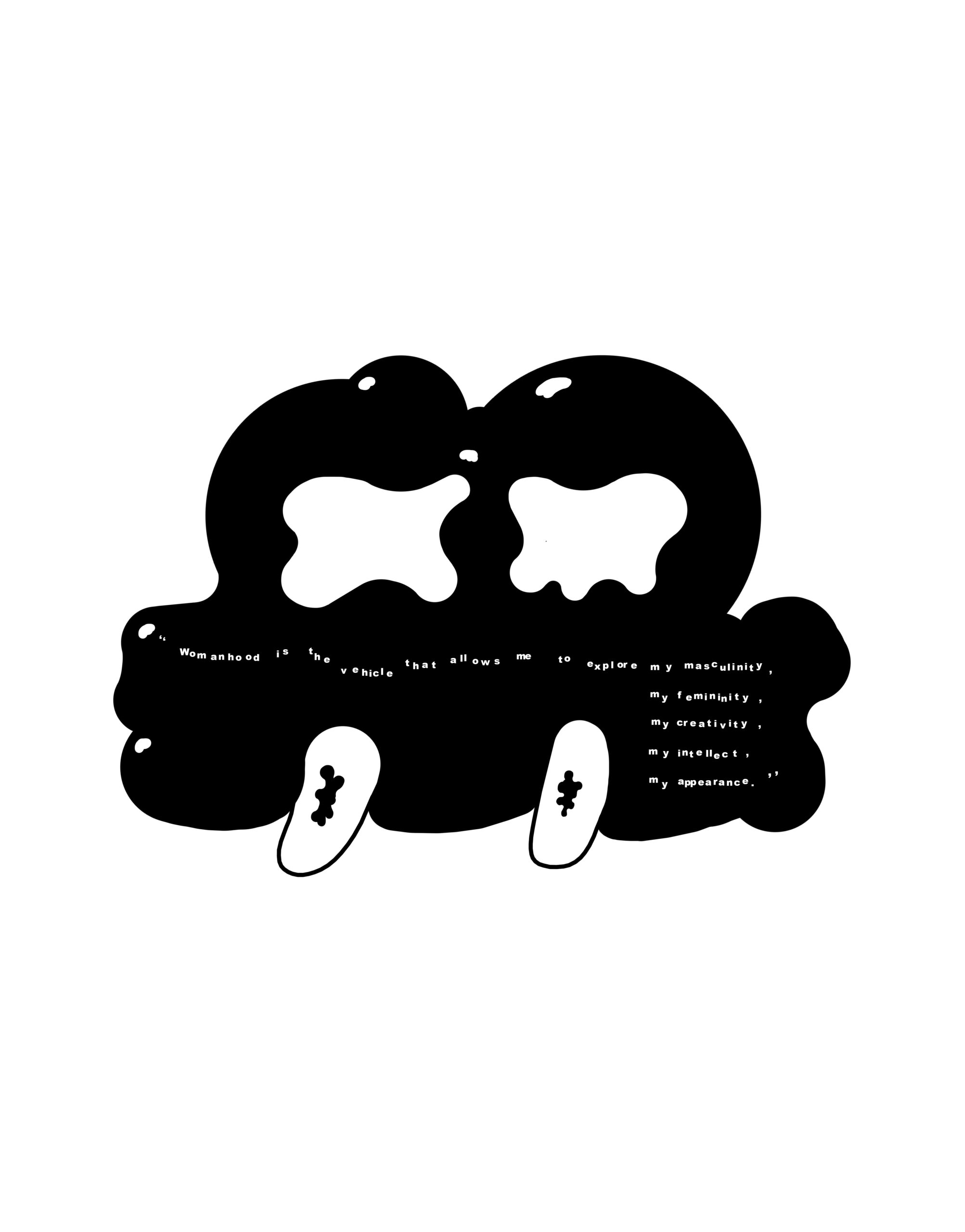 Slow Tongue, I-ntimised: an in-depth discussion with one author on the complexities of art and womanhood

Slow Tongue is a powerful collection, using language and design in an innovative way to create a new space for emerging voices. The title evokes the image of languid sexuality, a theme which pervades the collection, described by ripe fruit, “licking”, “sucking” and breathing heat. Douglass uses abstract imagery coupled with tangible language to beautifully depict love and sex. While this theme is an aspect which makes Slow Tongue such a valuable read, the collection ultimately showcases the struggle Douglass has faced as a woman of colour trying to explore and assert her identity and voice.

I have been lucky enough to see Douglass perform a few of these poems live. In one performance of ‘The Man Goes Bang continuously’, Douglass chose members of the audience to read parts in the poem, their freshness to the material adding to the pervading feeling of miscommunication and disorder. Poems that lend themselves so well to performance are sometimes in danger of falling flat when read. This is not the case with this collection however, as dynamic design allows this collection to become a work of art on the page.

Douglass visually represents struggle through misspellings, incongruous spacings and black boxes which obscure words, reminiscent of political censorship. Through this device the reader is constantly reminded of the effort that it has taken to put these words on the page. This is further emphasised by the editorial notes which litter the copy. As Douglass explains in her commentary, she left them in because:

“finished collections should not be polished bodies of work, but instead service as evidence of the processes of writing and the analysis of the self”.

The ‘run-on’ style of the publication helps the collection to be thought of as a whole, allowing new conversations to occur as the reader’s attention is drawn to the links between the poems.

As referenced in the title, Slow Tongue has been written in part as a response to M. Nourbese Philip’s collecton: She Tries Her Tongue, Her Silence Softly Breaks.

Both NourbeSe and Douglass explore the challenges of using post-colonial language to question racial and gendered repression, and in doing so, create a new, separate lexicon.

The explicit reference to other writers – NourbeSe is an active voice in one of Douglass’s poems – allows Slow Tongue to become part of a wider conversation. The author’s journey to find a voice becomes contextualised and layered when mixed with the voices of others.

She also weaves in historical narratives, like that of Sara Baartman, a South African woman who became a point of colonial fascination due to her ‘exotic’ body-type. Douglass tells her story in footnotes to give visualisation to the exploitation of black narratives. One of the most poignant phrases in the collection is Douglass’s editorial note: *write this again but instead Sara Baartman lives in a cottage in the country-side and has white skin*.

Douglass uses her position as the narrator to incredible effect. This ‘meta-narrative’ style guides our experience as a reader, as she voices the part of ‘audience’ while also challenging the reader through direct questions. In contrast, her narrative voice is deeply personal. She draws on real experiences: “I am twelve years old and my body has just learnt that the only safe way for me to command a room is when I am on stage”.

Slow Tongue brings together an impressive collection of poems, which can be read individually or holistically. Covering stunning narratives which expose important themes through new language and voice, Douglass has created an enriching read, both visually and otherwise. I highly recommend the collection, and look forward to seeing what this young poet does next.

————————————————————————————
Slow Tongue, reviewed above, is a collection of poems by writer and performer Olivia Douglass. It broadly focuses on creating language outside of the colonial lexicon and challenging the concept of identity, as a writer and as a woman of colour. After the initial success of the book I caught up with Olivia to discuss her next project, I-ntimised, the relationship between the two pieces of work, and her own development as an artist and a woman.

When asked how closely the two were related Olivia replies “cousins?” and then laughs. While not being “the chronicles”, they are both by the same author. “If I have two children they’re going to look alike” she explains, laughing again.
This familial extension came to Olivia after a particularly pivotal interview in which she discussed the issues surrounding navigating sexual intimacy while also being an othered body. She recalls feeling as though Slow Tongue touched on this but didn’t have the space to discuss it, “talking back on Slow Tongue [I was] able to see [what I was] ready to write about now”.

Slow Tongue has also shaped the format of I-ntimised. While lots of voices feature in Slow Tongue, other writer’s, the editor’s voice, it is predominantly a solo project. However, its positive reception is what encouraged Olivia to make In-timised a collaboration. “I realised that there are people who get it and can even articulate it better than I can”, she states.

Olivia is used to performing; previously on-stage was the only format in which anyone had heard her work. However, as a self-described ‘page orientated person’ this singular avenue was causing some disconnect, as only poems that were performed received any feedback. Despite this, the obsession with the visual appearance of words never waned. She states that when receiving a compliment after a show, she would reply with; “yeah but you should see what it looks like!”

I-ntimised develops from this relationship between writing and showing; Olivia wanted to play with the boundaries of spoken performance. Originally conceived as three essays that would each have a response in a different medium: film, sound etc, I-ntimised now has a looser structure. The piece works with the idea of conversation between mediums, with Olivia’s written ‘page-orientated’ work at the centre.

The confidence ascertained from Slow Tongue has allowed Olivia to develop as a performer. She states that “when I read, … I’m all here [raises hand to chin]. I feel like I bring it all to the surface and then I just let it sit there … when I read it comes out like it can’t spill”. Since the success of Slow Tongue Olivia pauses with more confidence,

“I can feel it in my body when I can let it spill out a bit”.

This renewed confidence has been exacerbated by her choice to self-publish and retain complete artistic control over the collection, both as a complete visual entity and as singular reflections of her ideas. When facing the problem of how to publicise her work, Olivia submitted the collection to competitions and magazines. However, she found that people were more interested in individual poems than the entire book. For a piece of work which explores the discussion between poems as well as the ideas in each, this was an issue.

Furthermore, Olivia’s choice to self-publish was, in part, to stay outside of any structure that wasn’t her own. She states that she would be open to publishing now if “they would not touch it at all – but they would put nice stuff in the blurb”. With a project of such intimate self-expression it’s a constant battle between trying to allow her work the largest reach possible while also staying authentic.

Another similarity between the two pieces is Olivia’s construction of an alternative language to express herself. In Slow Tongue Olivia worked with black boxes and a visceral editorial process to communicate more clearly. This was later defined to her as “dirty poetry” by one of Olivia’s literary heroes, who features heavily in the collection: M. NourbeSe. When I commented on the similar sexual undertones of both Slow Tongue, In-timised and ‘dirty poetry’ Olivia shrugged it off and laughed “well yeah… maybe we’re all just sexual demons”.

In this new project Olivia has created a way of connecting through symbols, pictured below. 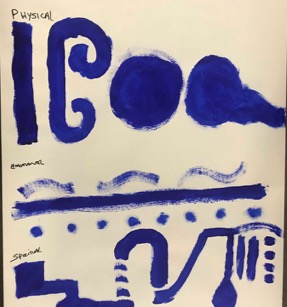 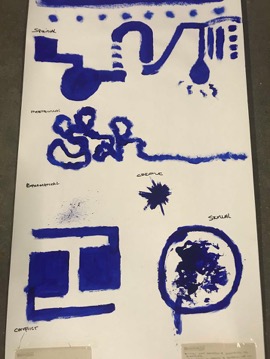 It is this goal, making work outside of the colonial sphere, that we talk at length about. Olivia states that people have to be really careful when claiming that this is something that they’ve achieved. She states that:

“I’m a product of colonialism, it’s a hard thing to say, but we all are …

so I don’t think that I’m necessarily functioning outside that, but I think I’ve opened a small space in my brain to imagine what I would think of and what that could look like. That’s what I’m trying to feed and build at the moment, and then hopefully one day this can become a reality”.

I then ask Olivia what womanhood means to her. She pauses for a long time and then states: “balance”. “My masculinity is very important to me” she explains. “As important as my femininity, I express myself through both, either at different times, or at the same time”.

“Womanhood is the vehicle that allows me to explore my masculinity, my femininity, my creativity, my intellect, my appearance.”

She goes on to disparage how little attention is paid to any dynamic further than just singular womanhood, how instead of the conversation being dominated by “I am a woman”, we should focus on “I am a woman and..”.

For Olivia, womanhood is not something she defines her identity by, but rather a membrane through which she filters her states of being. A platform from which to frame ‘messier’ discussions such as the pervasive effects of heteronormativity on black and brown queerness. It seems to me that womanhood and art both play similar roles in Olivia’s life, each allowing a wider conversation to develop, framing sides of a narrative which support countless interwoven complexities.

Make sure not to miss ‘Palm as a Portal’ the live piece born from the I-ntimised project at Talawa First Festival on June 28th.

Olivia Douglass is a writer, artist, and producer from South East London. Her work aims to great an innovative terrain for writing to re – mould the traditional and colonial images surrounding the Black Queer experience. She recently published her debut collection of poetry titled ‘Slow Tongue’, which is an examination of language and the relationship between Black women artists. She is Barbican Young Poets Alumni, and has worked with the Albany Theatre, Earwax Collective, The S+K Project. She is currently working at Hip-Hop Theatre company Boy Blue whilst creating her first stage show,  ’Palm As Portal’ supported by Talawa Theatre Company.