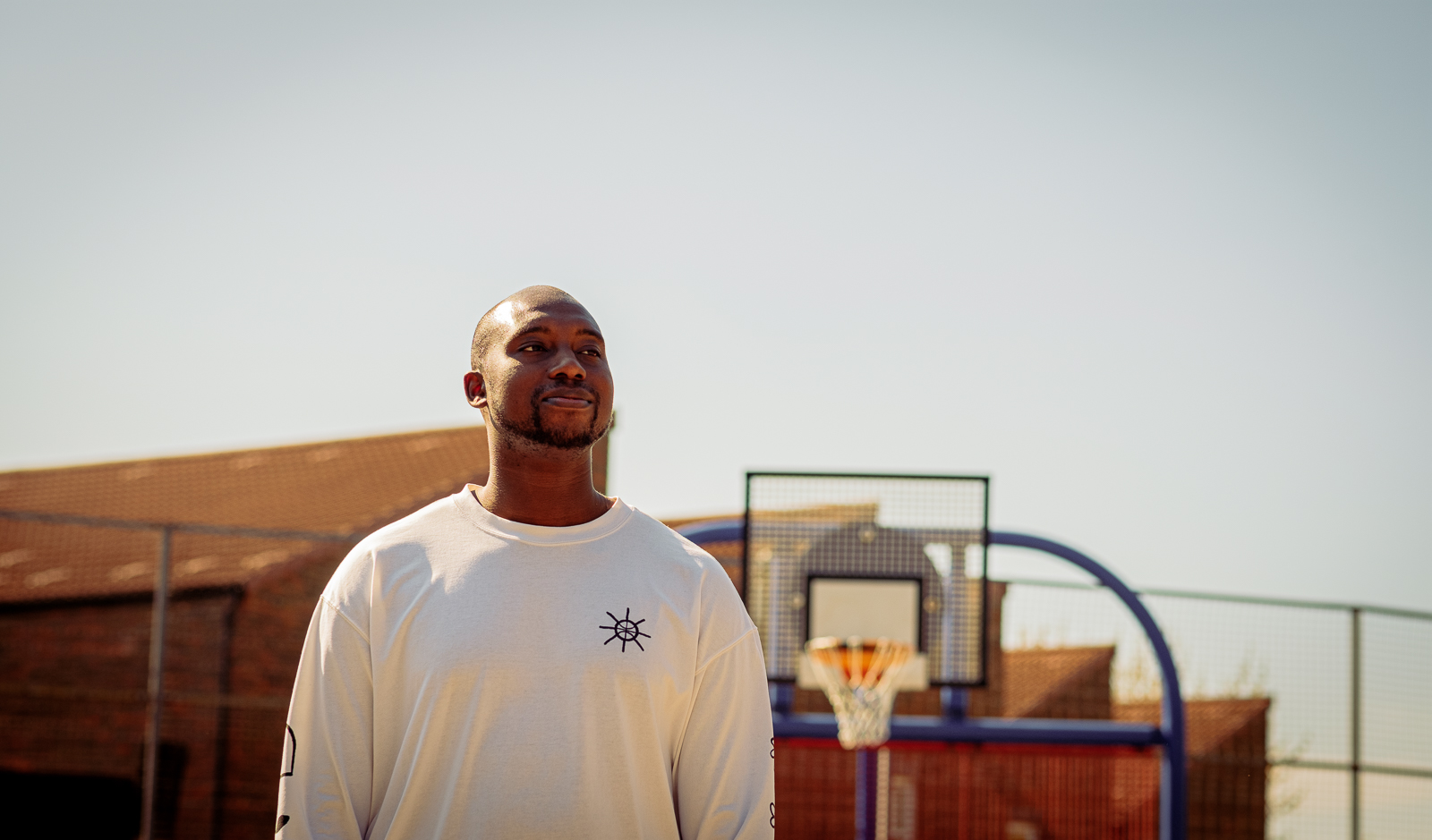 It’s difficult to add anything new to the excitable discourse around Caleb Azumah Nelson and his debut novel Open Water. The 27 year old writer and photographer has cut through the noise of first-time novelists with a beautiful meditation on Blackness, first love, masculinity, loss and growing up in London. We were in very good company in receiving and devouring the book and sat down with Caleb to find out more about his process, the importance of writing as release and the complexity and beauty of what Yaa Gyasi calls “being soft in a world that hardens against Black people”.

You’ve said that the “Black community are more than the sums of their traumas” – can you talk about the importance of joy, not only as a form of resistance but also as a form of being and as an emotion in itself?

It was important for me, when writing Open Water and also generally in my day to day, to afford Black people infinite possibilities. This meant tapping into the width and breadth of Black life, which yes, often features trauma and violence but there are real joys too. I’m trying more and more to partake and express these joys, which occur with the mundane, the everyday. I’m trying to lean into these moments, and open myself up to the possibilities that joy can bring, which for me is often a sense of freedom.

There’s a huge theme of freedom that runs through the book, especially a freedom and release which comes from Blackness. Does writing act as a tool for freedom for you? How does this compare with your photography?

My writing and photography go hand in hand; they both act as sites of honest expression, and encourage me to think about how I see the world, how I move through it, how I love and express that love. When I’m confronted by the blank page, in a way, I’m confronting myself, who I am, all of the nuances which make me. There’s a freedom in affording myself or others this kind of space, to just be themselves, even if that’s for a brief moment.

Miserly grey of a London sky on Carnival Monday. Hot and muggy and stiff. Summer’s beginning to stall and dwindle. You ran into a friend at Victoria train station. You hadn’t seen each other for years, not since way before he found his freedom being taken from him, but this isn’t the time or place, no, this is a time for joy and so neither of you mention the letters you wrote to each other during his eighteen-month stint, neither of you joke about his slim frame gaining mass, neither of you suggest that there might be something else, something like tired, swimming in his dark brown eyes. You embrace and exchange numbers, promising to link up later in the day, both knowing the possibil- ity of phone reception during Carnival is slim. You split, heading underground. When you emerge, London is still grey, the sky a single colour. As luck would have it, you bump into more friends trudging along the route, following sound and signs. Heading towards a house party. Rooftop vibes, they’ve got a little balcony. You’re reminded of Leah and Michel taking up Frank’s invita- tion to an amazing carnival pad in Zadie’s NW.

You can see everything from here. No need to lumber through the mass of people searching for a toilet or chicken or avoiding noise and violence on the ground, there’s always violence here, I guess that’s what you expect when – yes? That’s what you expect when? And in the silence, someone offers you a sausage roll and a Red Stripe and tells you to eat and drink until you are content. The room begins to spin in blue anger. There’s mimicry of broken English, like patois was a luxury, rather than a necessity, like the language did not emerge from Black body being split. There’s a Rasta wig here too. You are unsurprised that you don’t have fun. No one notices you slip onto stairs onto the street into Carnival, just in time to witness a crime being committed. Woman, bringing the yellow pastry of a patty towards her open mouth. Man, charges towards her with no regard, his elbow knocking hers, faint surprise as her pastry falls to ground, land- ing with a thud. He does not look back. She is too confused to chase. She looks up to see you, the witness, and you both grin in pain. This is how you found yourself standing in line with a stranger, relaying the events of the house party with rooftop vibes to her. While you talk your voice wobbles as you describe language plucked, plundered for the amusement of a few. She takes your elbow in her soft palm, asks if you’re OK. You tell her that you’re real cool because this is a place you have come to live. Come on then, she says, weaving between clustered joy, heading towards a sound system where you feel bass slap thud, like a heart- beat. There is a pleasurable freedom in this slowness; where the frequencies lower and it is not so much a matter of the head but of the chest. She winds hips loose like elastic, takes your hand around her waist and encourages you to slow down. You take pleasure in the muddy fervour of a generous moment found under the miserly grey of a London sky on Carnival Monday. Unexpected miracle in these moments of freedom.

As much as the novel is about love, masculinity and London – it is also a powerful ode to Black culture, describing in detail films such as Moonlight, art such as Sola Olulode and music like Kendrick Lamar. How much of this is meant to be an escape from real life, and how much of it is meant to be a shared experience?

Those various references helped me to express different emotions and feelings in ways I knew would resonate with others, as they did with me. There’s a level of escape, but we also recognise ourselves in those moments, or emotions that we are feeling/have felt. Sometimes, certain art is attached to specific moments; I know there are memories which are conjured when I listen to specific songs, and I was interested in how memory can function in this way.

The novel heavily features on the adverse experiences of young Black men in London – the experiences and discrimination faced by the police but also the pressures of masculinity – how far were these themes influenced by your own lived experiences?

The novel isn’t autobiographical but it is so personal to me. So many of the feelings behind the experiences were my own, especially those which featured the external pressure of state violence on young Black men. I wanted to explore what it meant to navigate the world when you occupy the body that I do, and how Black men can afford themselves space to not only be body, but person too.

The reader never learns the names of the main characters. What was the purpose of this?

The same reason for using the second person – I wanted to have as intimate and immersive an experience as possible, so that the reader was both an audience but also the protagonist. Having the use of ‘you’, ‘him’ and ‘her’ meant the reader was as close to the narrative as possible.

Who was this book for?

Young Black people, who haven’t seen themselves reflected in literature. I also believe that many of the themes will resonate with other readers who have experienced romantic love, and those who have lost and grieved.

BUY THE BOOK FROM WATERSTONES HERE.