Photovoice as a tool for youth empowerment and social change: Bridging Gaps

Bridging Gaps is a youth-led NGO founded in Germany and South Africa which brings critical political education and creative learning to young people through social interaction across two continents. As a form of youth empowerment, an exchange programme between the two countries takes place every year where the focus on the UN’s sustainable development goal “Reduced Inequalities” allows for an in-person exchange of ideas and experiences.

During the one week spent in South Africa and another in Germany, Bridging Gaps provides young people with the tools necessary to form their own in-depth analysis of societal constructs. One way they do this is through photovoice methodology, a type of visual communication where photography is used as a mode of storytelling. For Bridging Gaps, participants went through photography training and explored a city in Germany. They produced photographs with a corresponding abstract, to make sense of the multiple, interconnected forms of discrimination and power imbalances that shape everyday lives.

Below is the testimony from two young women who took part in the photovoice project. Having endured similar experiences of sexism and racism despite being from different worlds, they reflect on the inherited discriminatory societal structures which transcend time and place.

Rethagan Scheepers, 20 years old, Pretoria, South Africa
We often describe South Africa as ‘Ubuntu’, a humanist philosophy which places dignity at the core of one’s actions, deeds and interactions with others. However in reality, human dignity for all South Africans is far from being achieved. COVID-19 has unveiled society’s cracks and brought to light the underlying hostilities that still exist between Black and white communities. These hostilities are rooted in white fragility which has allowed many white South Africans to be ignorant to the fact that legacies of Apartheid and colonialism continue to shape the society we live in today. Until these realities are accepted, structural and institutional racism will continue to exist and racial hostilities will continue to rise. 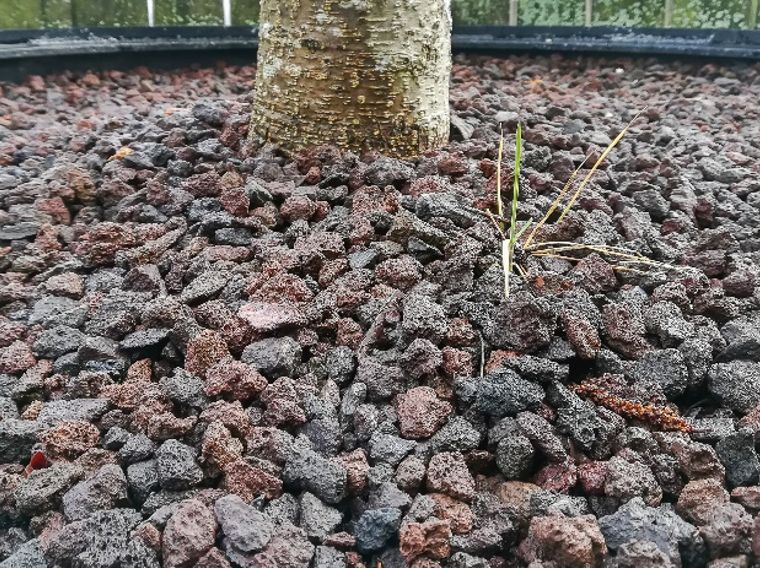 “Around the plant are stones that are repelling it and not allowing it to grow willingly – to grow free… It is difficult for a child born in an environment where they can’t really expose their true being to themselves and to other people” (2018, Photo by Fortunate, South African participant)

Poverty is still a huge issue which affects the lives of the Black community in South Africa. This is due to the legacies of an aparthied regime which has embedded a system of racial inequality into the nation and left many Black communities disadvantaged in terms of location, education and work opportunities.

COVID-19 worsened these racial divides as the pandemic threatened the livelihoods of those within our community. Black South Africans are more likely to be in informal employment, and they were severely affected, their loss of income resulting in, among other things, no access to proper healthcare. And as the unemployment rate continues to rise, people are turning to crime as a way to make ends meet. The endless cycle of poverty is seemingly becoming more and more difficult for Black South Africans to escape.

Then there also is the issue of gender-based violence, a pandemic that South African women cannot seem to evade. Lockdown regulations have caused a spike in gender-based violence as it was easier for perpetrators to abuse their victims while support services were suspended Gender-based violence has escalated to a point where a simple task such as going to the shops has become a dangerous activity.

My time with Bridging Gaps has equipped me with the necessary critical thinking skills required to unpack social injustices and norms. Photovoice was an activity that challenged us to extend our critical analysis of society through the use of a photograph. Through the pictures that were produced, I was amazed to see how our level of thinking and understanding of social injustices had developed, allowing us to identify patterns of injustices within our surroundings. We all encounter different forms of it on a daily basis and through this activity we are given an opportunity to reflect on how it affects us individually. After all, a picture does tell a thousand words.

My image, taken in 2019, was of a white individual, placed on a higher platform reaching down to me, a person of colour, in an attempt to bring us onto the same level. In the society I live in, the concept of white privilege is one rejected by the white community. However, the individual in my image acknowledges their privilege, and uses it to help even out the playing field. To me this represented the first step to achieving a just and equal society. 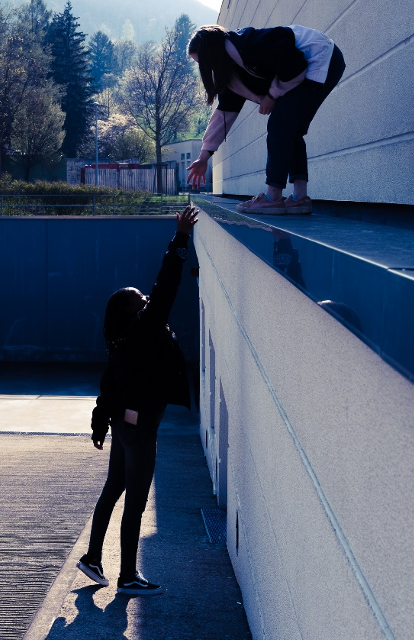 With the knowledge that I have gained from the organisation, it becomes easier to identify the cracks in the society I live in. This is especially important when trying to understand the multiple forms of oppression that exist in our nation as a result of a long history of exploitation and injustice.

Injustices exist everywhere around the world. Through my engagement with Bridging Gaps, I have learnt that everyone experiences a unique form of discrimination and oppression – but by familiarising ourselves with, and unpacking, certain concepts we gain a better understanding of our societal structures.

Saron Rosa Tsegaye, 20 years old, Konstanz, Germany
My parents migrated over 30 years ago to study in East Germany. Growing up, I had the privilege of frequently travelling to their birthplace of Ethiopia. Since my early childhood, I have found it difficult to align my Ethiopian and German identities. I am German on paper, but this will never solely be the country I claim and identify with. Simultaneously, I have always been a foreigner in Ethiopia; someone who doesn’t quite fit in and pronounces Amharic words wrong, much to the amusement of my relatives. .
Throughout my youth, this identity crisis stirred in me a passion to delve into topics like racial injustices, colonial histories, colourism and sexism. Obtaining knowledge from wherever I could find it (reading books, watching debates and engaging with TedTalks), I became empowered to take pride in my Blackness. As a young Black woman, I began to take the first steps in understanding the derivation of the social structures which cause me to suffer. At the same time, while I felt empowered and I also felt overwhelmed, understanding more keenly that I was stuck in a discriminatory system.

People in Germany often categorise me as bi-racial. I’m continually asked: “Where do you really come from?”, “When will you go back to Africa?”, “Can I touch your hair?”. If not questioning my heritage, they’re making racist assumptions of their own: “You are really beautiful for a Black woman!” or “You have the perfect complexion. you are not too dark or too light!”. I do not seem to fit into their prejudiced assumption of an African woman. From my experience, racial profiling, colourism, and sexism are normalised in daily occurrences. My Photovoice project encapsulates the intersectional ways in which I face marginalisation whilst also illustrating the present effects of colonialism and exploitation. 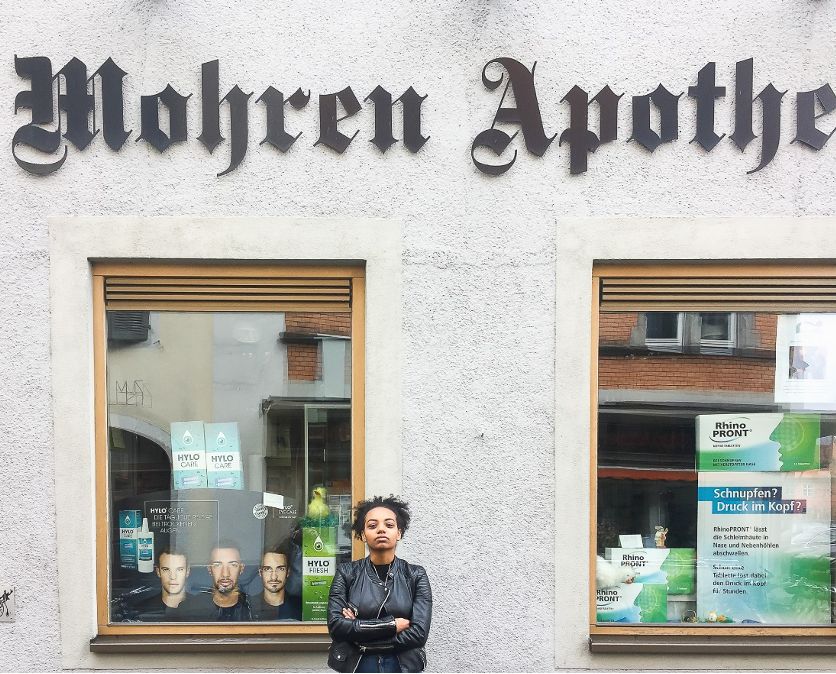 In this picture, I stand in front of the pharmacy chain ‘Mohrenapotheke’ in my hometown. ‘Mohr’ is an old German word to describe Black people. Many streets, companies or foods are still labelled with this word, despite its racist and colonial background. Simultaneously, three men are located in the shop window, football players in the German national team. This analogy is meant to serve as a metaphor of both the German norm and ideal: a white male privilege which exists in contrast to my position as a woman of colour. As I stand in front of them, in front of the shop, I can only affirm myself in society as a Black woman of equal power, who takes up space, and rightfully so. 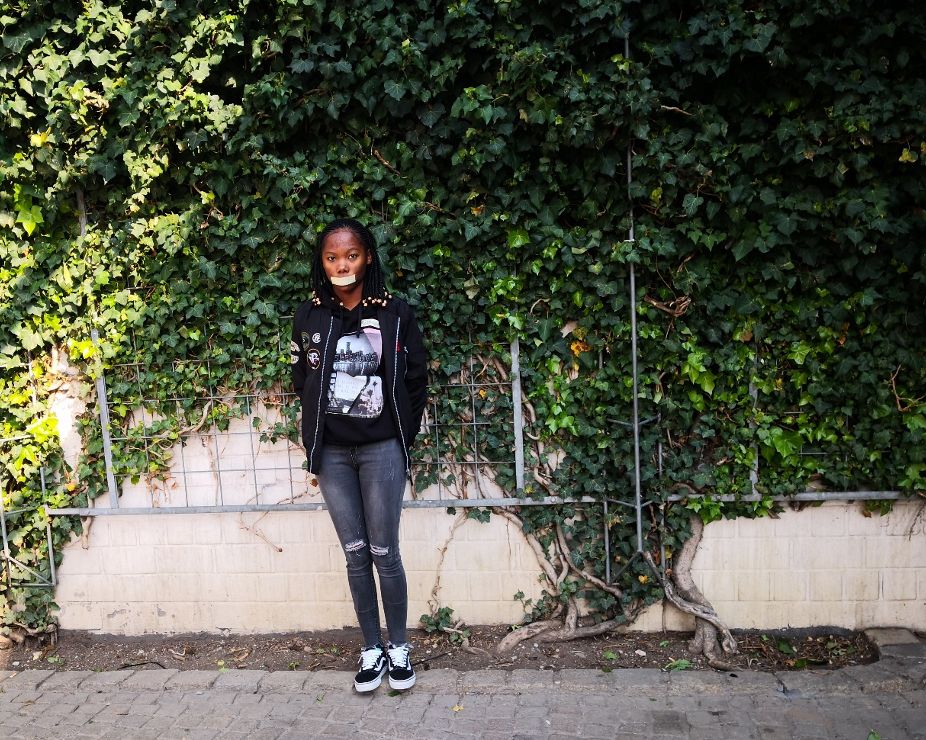 “Surely, we should be able to hear the voices of the silenced. The world is greater than what we think and there are ways in which we can empower both men and women equally” (2019, Photo by Olivia, German participant)

I have remained an active member of Bridging Gaps for four years now. During lockdown, we broadened our virtual spectrum of education. Through webinars talking about cultural appropriation in Germany, a podcast titled ‘Was weiss ich? Ein Podcast über das Weißsein’ (What do I know? A podcast about whiteness) and a published brochure titled ‘Spaces between and Beyond’, we and our partners in South Africa have gone above and beyond to raise awareness of societal problems in new and accessible ways for all to engage with and reflect on. We hope that these conversations continue beyond our presence, as we work towards enhancing cross-cultural understandings of social injustices and what it means to really feel equal in society.

The youth exchange and photovoice works as a tool for social change in the dual sense in that it not only empowers and bolsters the self-esteem of participants via artistic engagement, but it also provokes a process of critical reflection in the observer. For Rethagan and Saron, their shared experiences of the racism and sexism that remains rampant in our global society shines through in their work. Bridging Gaps aims to stimulate public conversations from young people’s visual expressions of societal injustice, conversations which in the wake of COVID-19 are needed now more than ever.