in conversation with Ixta Belfrage and Nyasha Sakutukwa

The beginning of lockdown seemed to create a new generation of keen amateur chefs, with people of all abilities forging new connections with food. Banana bread and first-time sourdough makers were taking over Instagram; countless people recorded videos of themselves replicating Ixta Belfrage’s infamous Biang Biang noodles; fans dipped into Nyasha Sakutukwa’s #MUNCHIES cookbook to create the ultimate late night spaghetti carbonara. However, with the increase in COVID-19 cases, this kitchen idyll was soon replaced by a distinct discomfort: more and more data from scientists following the spread and effects of COVID-19 began to show a disproportionate impact of the virus on BAME healthcare workers and communities. Then, on 25th May 2020, George Floyd was murdered by police in the US, sparking a ripple effect across the world of the re-ignition of the Black Lives Matter movement and causing industries to reflect on the structural racism which existed within them. It was made glaringly clear that the culinary world, along with pretty much every other industry, had – and still has – a very big diversity issue.

Riaz Phillips, author of Belly Full: Caribbean food in the UK, created an initiative which brought all our lockdown realities together, from early lockdown’s comfort food to the protests catalysing systemic change. Riaz collected recipes from over 100 British chefs of migrant heritage to create Community Comfort, an E-cookbook celebrating food from all corners of the globe. Alongside uplifting the recipes, the cookbook has an added social purpose, with funds raised going to provide support for BAME families who have been bereaved by COVID-19. He says, “I thought it would be apt to gather recipes from people who look like those same people and who are those same people [who are being disproportionately impacted] to celebrate their food and raise money to help people”.

When we saw the initiative, alongside the beautiful accompanying illustrations by long-term shado contributor Javie Huxley, we were eager to find out more – and what better way to bring the content and cause to life than by hearing from two of the chefs themselves? Last Thursday, 6th August, we were thrilled to host an Instagram live with two of the Community Comfort chefs, Ixta Belfrage of Ottolenghi fame and Nyasha Sakutukwa, otherwise known as Munch Club TV. Ahead of the recording, we sat down with the two chefs to find out more about their journeys into food, their experiences in the food industry and how they got involved with Community Comfort. You can watch the full IGTV video of the pair making prawn and cheese quesadillas with a prawn bisque, complete with mystery ingredients and challenges, here.

How did you both get involved in the Community Comfort project?

Ixta: I have a lot of respect for Riaz’s work and absolutely love his book Bellyful. We know each other through the food industry and through some mutual friends, and when he asked me to be involved I jumped at the chance to be part of a project for such a worthwhile cause.

Nyasha: I was minding my business one day and got the email from Riaz to contribute. I thought it was an awesome idea and really wanted to help out!

Can you both tell us about one meal that takes you back to your childhood?

Ixta: Penne all’Aconese- a pasta dish with a (secret recipe) spicy ragu made from ground pork, porcini and tons of black pepper. It’s served at Ristorante Pizzeria Acone, a restaurant just up the road from where I grew up in Italy. It’s my favourite dish in the world and the first dish I fell madly in love with when I was about 3. I try and get back to eat it at least once a year.

Nyasha: My Dad used to make Chinese food for our Sunday dinners, so growing up I used to love the noodles he used to make. That was probably the first thing I learnt how to cook and it’s what I cook to make myself to cheer myself up when I’m sad, low or hungover – and there’s definitely an element of taking myself back to those times whenever I have them.

What was the significance of each of the recipes you chose to include in the cookbook?

Ixta: My recipe is for pirão, which is one of my favourite Brazilian dishes. It’s a porridge of sorts, made by beating coarse cassava flour into hot seafood stock. I first had it in my mum’s hometown of Natal, in the Northeast of Brazil, at a little restaurant on the beach. I couldn’t get enough and to me, pirão is the epitome of comfort.

Nyasha: The recipe I chose was a comfort recipe from my cookbook, #MUNCHIES. The story behind it was that this dish brought comfort to a couple of my friends at University, so I just wanted to give everyone something easy to make which I know is like a warm little hug in itself. Every time you cook it, just think of it as a hug from me!

Can you tell us a bit more about your journeys into food?

Nyasha: I’ve been cooking since I was a kid, and when I was a teenager I would binge Jamie Oliver and Gordon Ramsey shows thinking they were the pinnacle of food. As I grew older I wanted to create a platform where I could showcase my skills and give a platform to the people that I admire from Black pop culture – and that’s how Munch Club TV started.

Ixta: I’ve been thinking about food since I had conscious thought, and cooking since I could hold a knife. Food is always on my mind but for some reason it never seemed like a career option until I was in my mid twenties, hating the design degree I was doing and with no other prospects, my sister asked me bluntly: “Why the f* aren’t you a chef?”. After that I sort of just fell into it. I ran my own market stall for a while selling tacos, then ran a little catering company, then worked at NOPI before moving to the Ottolenghi test kitchen. I’m self-taught and my mantra is that there are absolutely no rules when it comes to cooking.

How do the two of you know each other?

Ixta: Nyasha invited me to a party he was hosting a couple of years ago and it turned out we had mutual friends. Since then, we’ve bonded over our love of tacos and prawns (which feature in the dish we cooked yesterday).

Nyasha: I’m President of the Ixta Belfrage Fan Club! In all seriousness I’ve been following her on Instagram for a while and I just loved everything she chucked up on her page. It’s the type of food that I love, full of flavour, mixing cuisines but doing it well and with respect.

What is the importance of food when it comes to community and bringing people together?

Ixta: I think that COVID-19 and lockdown has made that importance so clear. I desperately missed being able to cook for people, and going to restaurants to experience the shared vibe of people enjoying food and company together.

Nyasha: I feel as if it’s something that may be taken for granted, but with COVID-19 taking away our ability to go to restaurants or to friends and family’s houses for a meal I think people are really realising just how important food is in bringing people together.

We read a horrifying stat from a Vittles newsletter which read: “Between the Guardian, the Observer, the Telegraph, Financial Times, the Times and the Sunday Times, there have only been two reviews of a restaurant serving African or Caribbean cuisine in the last ten years.” What have your experiences been of Black erasure in the food industry?

Ixta: As a white woman in the food industry, I recognise and acknowledge my privilege. Thinking back to all the kitchens I’ve personally worked in, the harsh reality is that Black people were only ever present in the back of the kitchen, if at all. I’m hopeful that this will change, with fantastic organisations like BAME in hospitality leading the way by investing in the development of BAME chefs and FOH. I want to use my platform to be part of that change. I’m signed up to be a mentor with BAME in hospitality in the hopes that I can share any knowledge I have, and so that we start to see some much needed diversity in the industry.

Nyasha: I guess for me I always try to see how many Black people I see in food entertainment on TV and in the media and they’re hardly there. There’s hardly any fronting any food shows and you look at all the large food channels online and there’s really not that many on there either. That’s something I’m trying to do, but I don’t see too many people to look up to.

How did you decide on the meal you decided to cook for the cookalong and why?

Ixta: Nyasha and I share a love for prawns and tacos and the dish we came up with is born out of that love. We had dinner together to chew over some ideas. We spoke about a tortilla dough I’ve been working on, about our love of bisque, and about our controversial love for pairing seafood with cheese, and the idea for these prawn and cheese quesadillas with prawn bisque was born. We’re lucky to have our mutual friend Sam on board to film us and throw some challenges into this mix as we cook.

Nyasha: Ixta knows I love prawns so she got me on board by suggesting we do a prawn based dish and from there I didn’t even need to know what else was going on, I just needed a date and time to turn up! 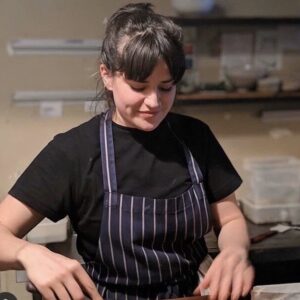 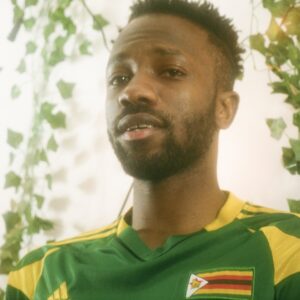 Nyasha Sakutukwa is a food content creator under the name Munch Club TV. He started Munch Club TV as a way of engaging people in the food he loves alongside showcasing the best of popular Black culture. He has just released his debut recipe collection, #MUNCHIES, which is available via his website.

Ixta Belfrage is an English-Brazilian self-taught chef based in London. She has worked in the Ottolenghi test kitchen for four years, and is co-author of the forthcoming cookbook ‘Flavour’ with Yotam Ottolenghi (out September 2020). Her cooking style is greatly influenced by the food and culture of Italy (where she lived as a child) Brazil (where her mother is from) and Mexico (where her family lived). Pre-order ‘Flavour’ from Penguin here.