De Nichols on storytelling, lived experience and the power of art

When faced with the enormity of our global struggles, too often we can experience a sense of hopelessness at the barriers and injustices in place. And with young people confronting an inherited future characterised by climate breakdown and increasingly authoritarian governments, it’s hardly a surprise that Avaaz’s 2021 global survey revealed this year that 60% of young people feel extremely worried about their future. So the question is posed, in particular for the global youth who are faced with a worldwide challenge: how can we regroup, re-mobilise and replace fear with hope?

The answer, as we found when talking to De Nichols, lies in doubling down on people power. In Art of Protest, the ‘designer-activist’ curates a collection of stories and histories from young activists and artists around the world who prove just how powerful action can be. The collection, a hardback full of artwork and calls-to-action, is suitable for all ages but aimed at young people and those new to activist movements. It equips the reader, through lived experience and protest art, with the tools and inspiration they require to apply art, action and storytelling to their own lives. 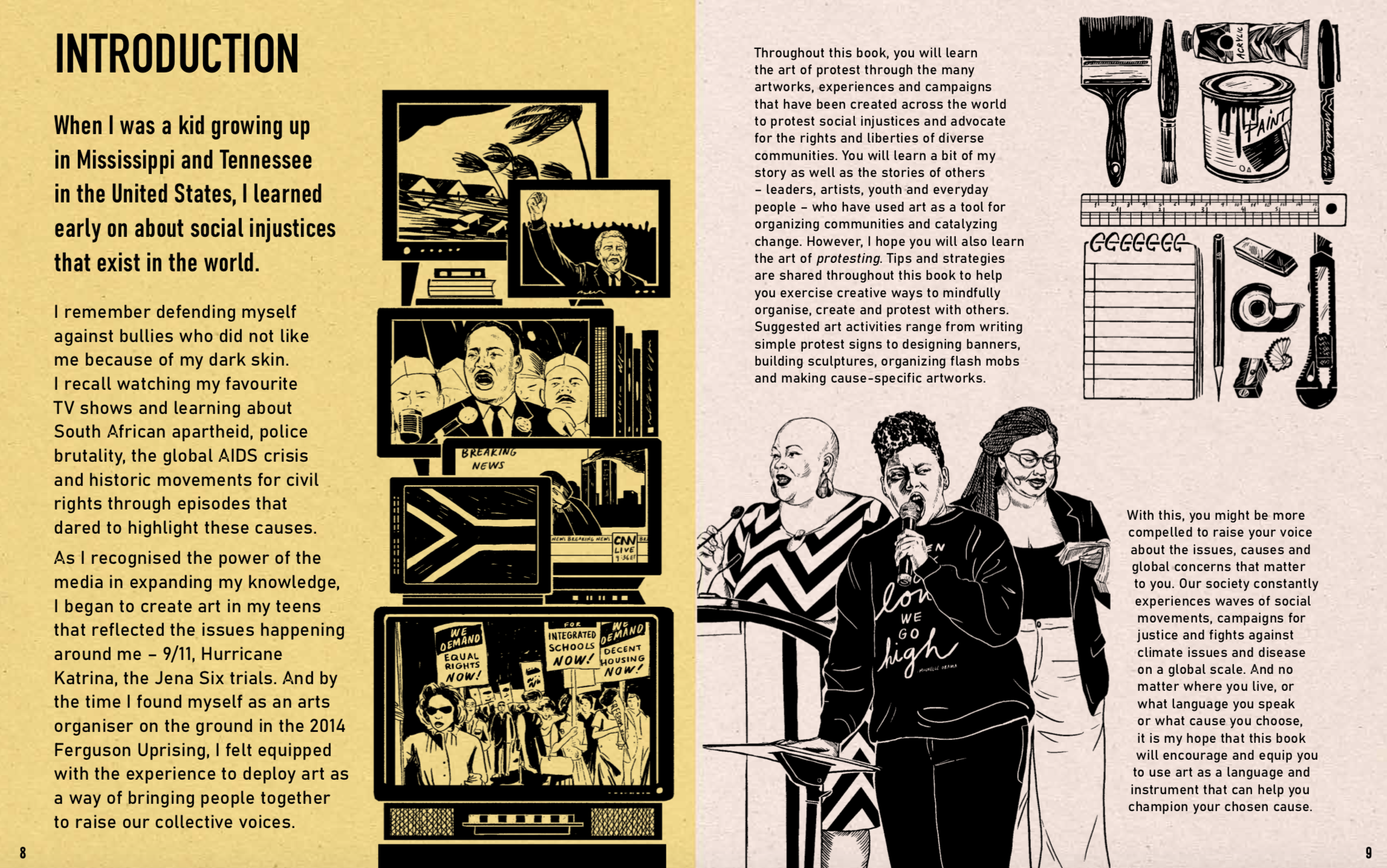 What excites you most about the role of art in creating change?
When I consider the multifaceted roles that art plays in creating change, I am most excited about the series of moments in my life that have inspired me to see the power of the arts to shift minds, defend freedoms and mobilise community. As a co-organiser of the Artivists STL collective during the 2014 uprising in Ferguson, the works that my comrades and I created were a testament of this truth. When one of those works, the Mirror Casket, was ultimately collected by the National Museum of African American History and Culture, activist Angela Davis wrote an article titled “Art of Protest” about it for Smithsonian magazine.

During that time, Artivists STL led the production of 80+ collaborative works in cities across the nation under the leadership of Chicano activist and poet, Elizabeth Vega. Those works, those cities, and our collective efforts over the years inspired me to reflect, research, and learn more about so many other artists and artworks across the world. Thus, when I connected with my editor to write, Art of Protest, I was serendipitously ready and prepared to take readers through this journey of learning with me. 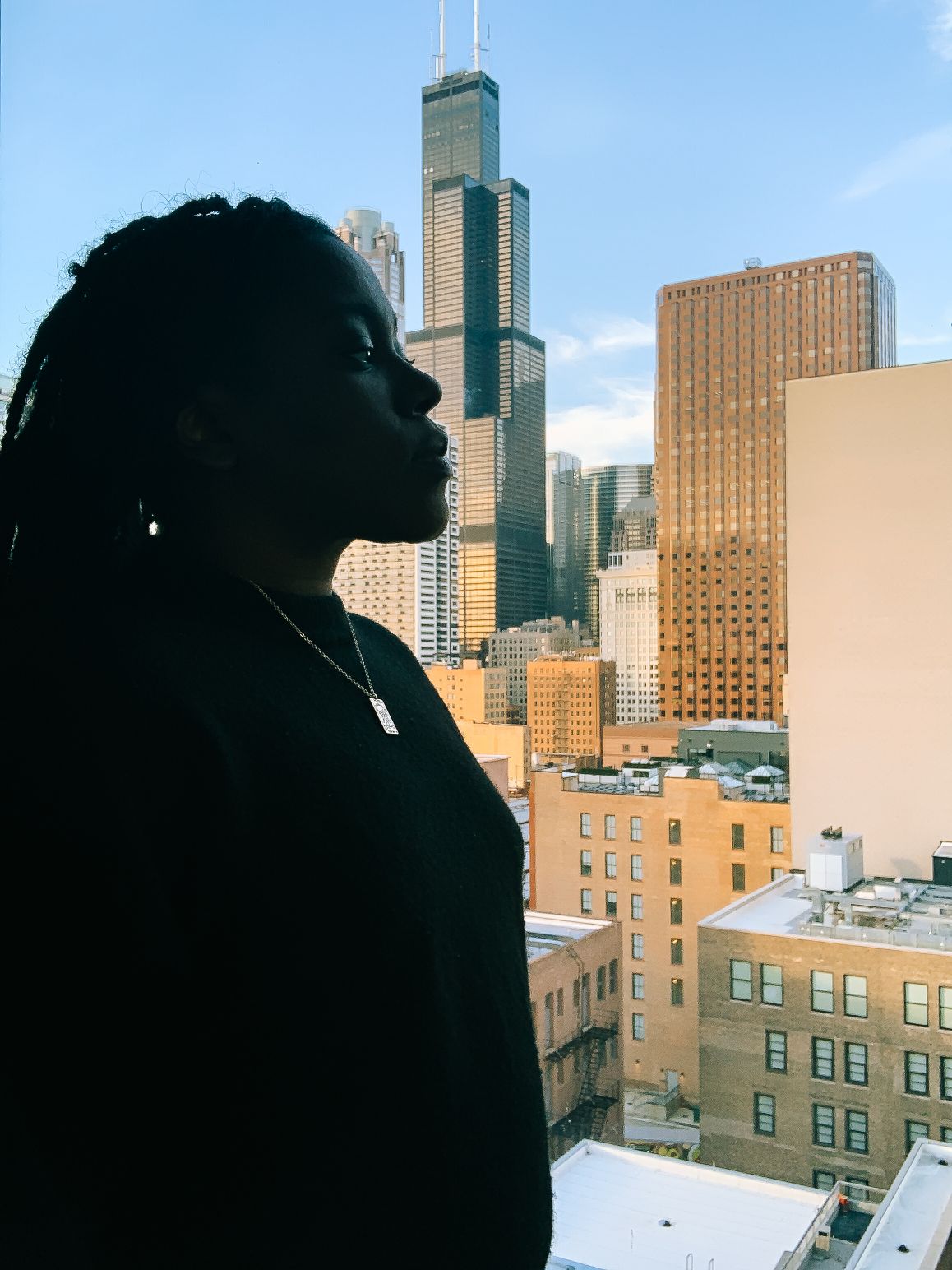 Why did you decide to create a book aimed at young people?
Art of Protest is the book I wish I could have had as a young artist. In the book, I discuss my childhood encounters of protest art, and there could have been immense value in having a resource and guide to help me understand what I was seeing. As technological advances like social media allow for youth to witness and participate in activism and protest more readily today, I wanted to write a book that introduces them to creative practices that they might consider as they show up, speak up, and stand up for what’s right.

I wanted to introduce them to artivists, artworks, and histories that many do not learn about until adulthood – if at all. And, I wanted to equip them with foundational skills like typography, colour theory, and symbolism that they could ground within their own works.

How does your background in teaching feed into the book and how you went about writing it?
As a former museum educator, professor, and teaching artist, a foundational mantra of my approach is to “show, teach, but never tell.” This means that instead of blatantly telling students what to think, I demonstrate processes and methods, guide them to train and practice their skills, and provide an array of stories and examples for them to form their own opinions and viewpoints on a subject.

In Art of Protest, readers will witness this approach come alive not only through the multitude of stories and art forms that are shared, but also sections like “You Try” and “What Do You See” that challenge them to view works with a more critical eye or even create works inspired by examples provided.

What have the outcomes been since publishing the collection? Are there any responses that particularly affected you?
Thus far, the response has been filled with so much support, excitement and warm reception. Beyond the stories, a lot of readers have messaged me across social media to express how they enjoyed the illustrations and value the book’s lessons on subjects like colour theory and typography.

In addition, many people have shared that they consider the book itself as a work of art because of its open-stitch binding and the boards used for its front and back covers. I really appreciate such responses, as these choices in the materiality of the book are indeed intentional and reflective of the contents inside.

Can you tell us a bit more about the process? As a global collection, what did your methodology look like in terms of commissioning and the voices you chose to include in Art of Protest?
I have to give all credit to my awesome editor and book designer from Big Picture Press for how they worked with me and the illustrators to ensure that my writing conveyed stories in ways that could awaken their visual voices and produce an array of scenes for them to respond to. Each illustrator provided mocks and iterations that I would then work with our designer to suggest any tweaks and additional ideas. Because of COVID-19, the process was largely via email threads, but I met monthly with the team and used Zoom to talk through ideas virtually.

What do you believe is the importance of storytelling and lived experience leadership?
One thing that I learned early in my journey is that “people don’t care what you know until they know that you care.” Lived experience allows us to know on a deeper level than theoretical or academic knowledge would ever allow because we know what it means to feel and empathise with the emotions, needs, and experiences of others.

Storytelling becomes important in bridging the connections between our lived experiences and others’ so that we extend from individual struggle and strategy to a more collective (and assumably more powerful) approach to fighting for change.

What’s next?
Yes! I am a co-organiser of the national Design As Protest (DAP) collective, which has cultivated demands and direct actions to hold the fields of architecture, design, urban planning, etc accountable to the ways in which our cities and public spaces are designed to produce experiences of harm, injustice, and hatred against people who have been marginalised. I lead the DAP Studio, and our team is currently writing and producing a series of nine zines to illustrate and tell the stories of some of such injustices and the various people across the nation who are bringing forth change.

In addition to this, I help lead community efforts with The Griot Museum of Black History in St. Louis, MO. Currently, I am co-organising its Black HerStory Initiative supported by Monument Lab and the Mellon Foundation that uses art to challenge the ways in which Black women have often been left out of the ways we understand history in public space. We are designing and launching a series of public markers that celebrate the stories of how Black women have impacted the civic, cultural, and social progress of the region. With this year’s election of the city’s first Black woman mayor, Tishaura Jones, and the federal leadership of our hometown Congresswoman, Cori Bush, as two examples, this project will be the first of its scale to honour Black women in public space in the city.

You can purchase the Art of Protest from Bonnier Books HERE 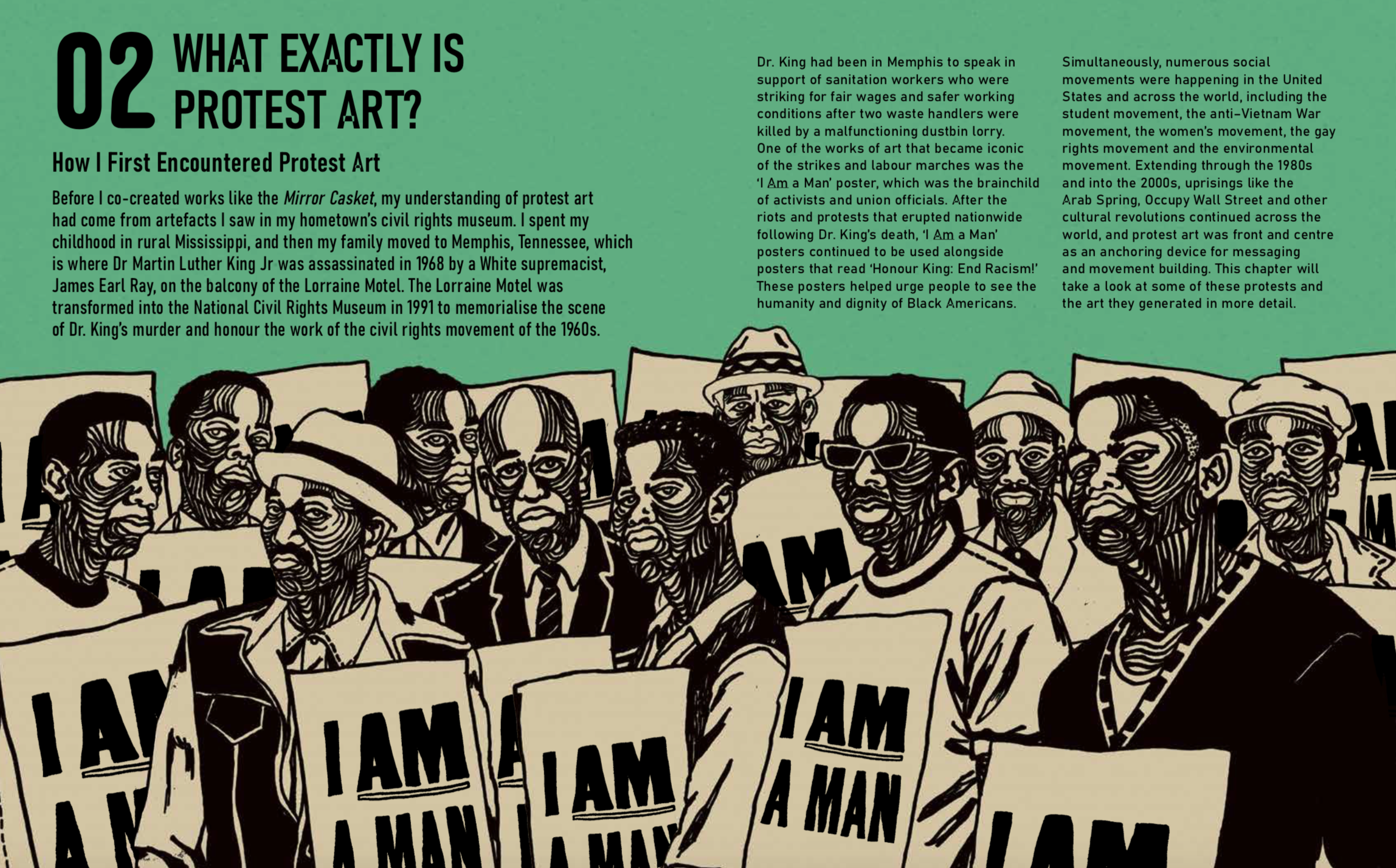 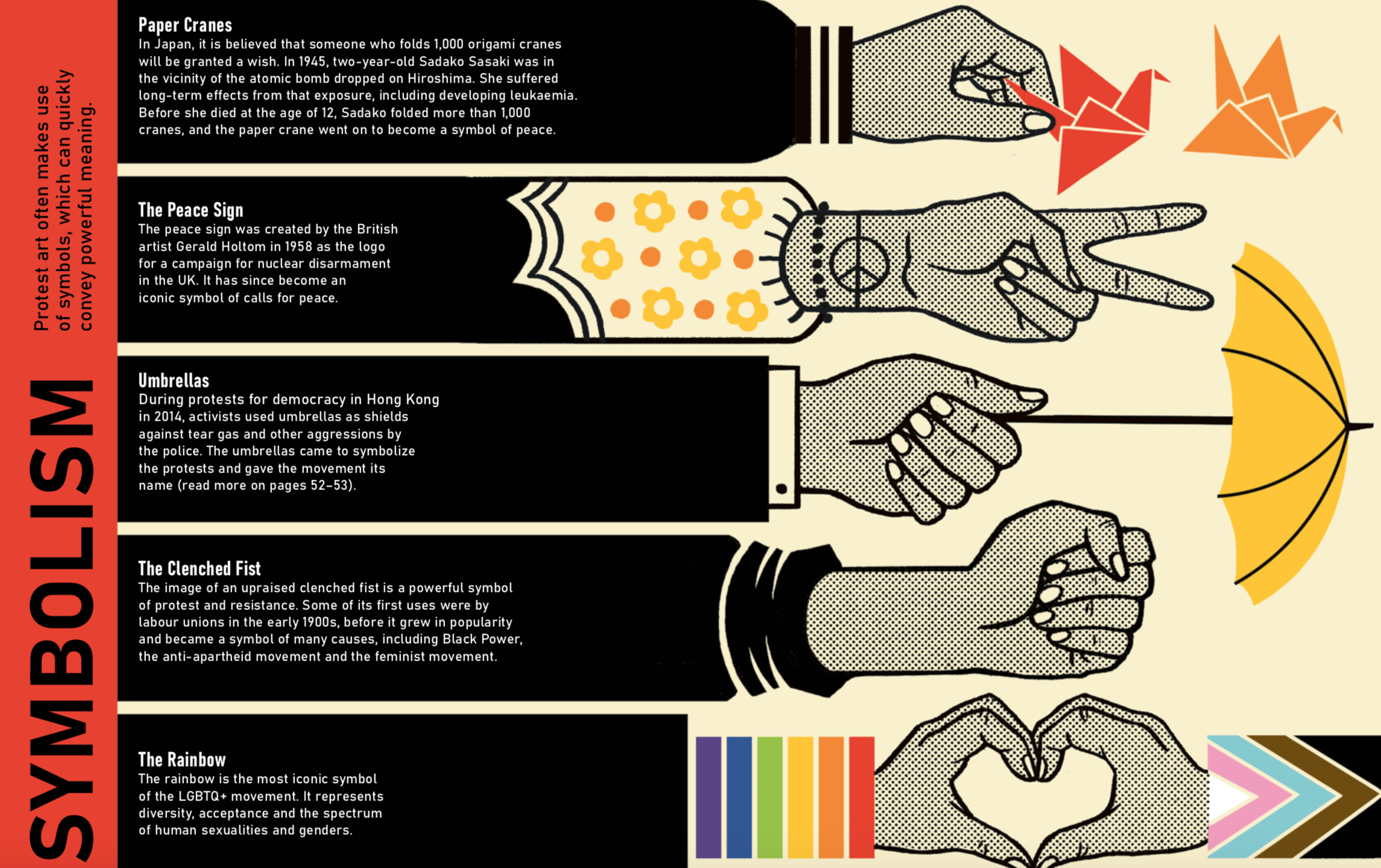 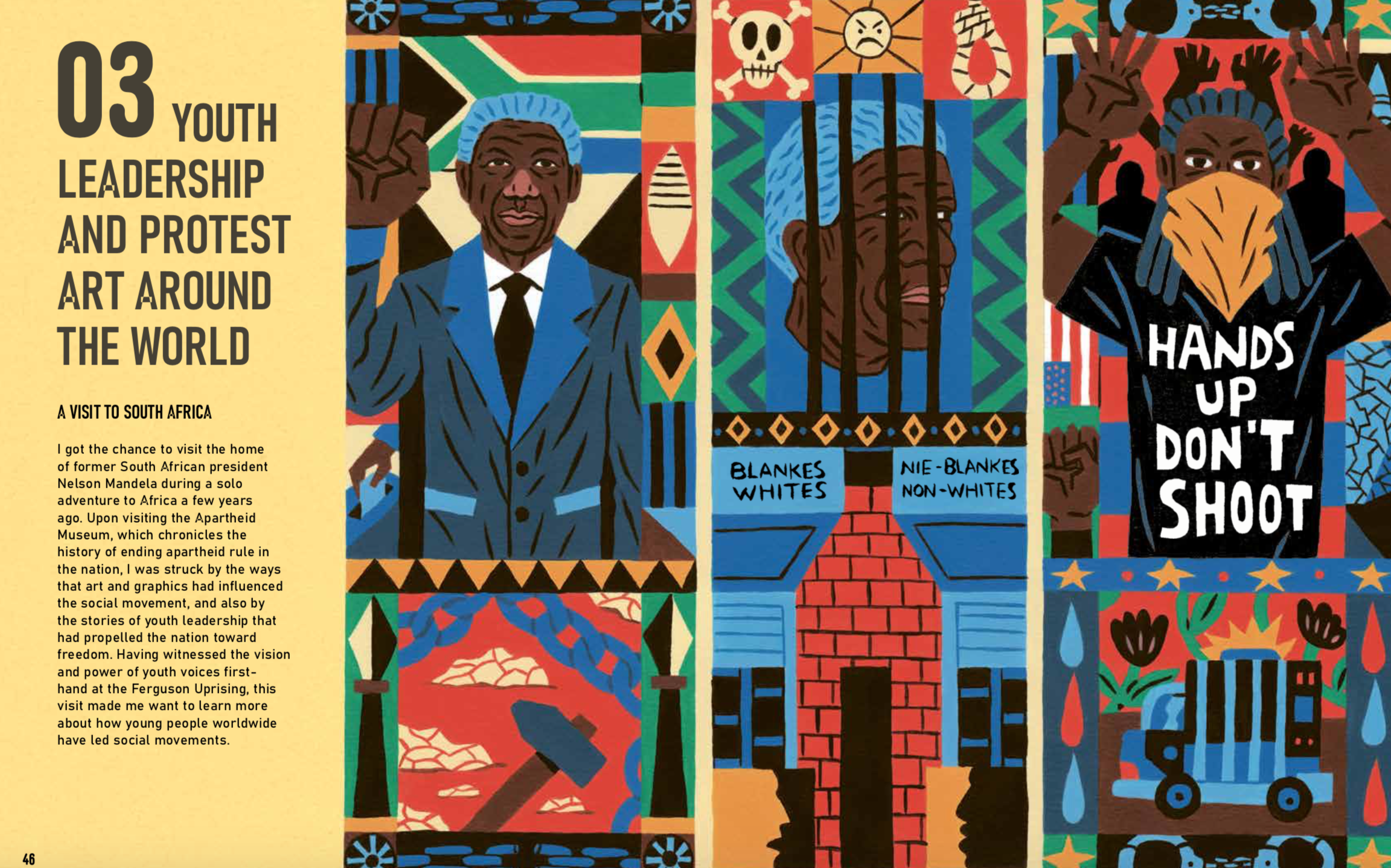