B[L]ackground: an exploration of existence and non-existence

While there is no shortage of politically-charged art, it’s rarer to come across an artist whose work is both a byproduct and manifestation of real-life social justice work. Suley Wellings-Longmore is one of those individuals; human rights lawyer by day, artist by night, he unites his passions with a drive for change. Before going to Harvard this September, Suley exhibited his latest show B[L]ackground in East London last week. We caught up to talk about his inspirations, his self-taught practice and his lived experience of growing up in London.

What influences and lived experiences have shaped your work?
Living in this world as a Black man, growing up in London, is the biggest influence on my work. My race is the lens through which I see the world, and the lens through which the world sees me – it is the most vital lived experience that shapes my work. Reflections on who I am and how that sense of self fits within my environment, both physical and social, are key drivers for my work.

The murder of George Floyd was a turning point in my artistic journey as it inspired me to be bold in conveying the messages that are important to me. Not all of my pieces are about racism or the pressures that Black people face, but each piece speaks to some part of the Black experience – those beautiful and those less so.

Can you tell us a bit about the theme of your latest exhibition, B[L]ackground, and the process that went into creating this body of work?
The colour black connotes both presence and absence, before and after: existence and non-existence. Extrapolating this paradox to race, we arrive at a nuance of Black identity – to be simultaneously invisible and conspicuous to the world around you. Thus, my exhibition B[L]ackground explores when we, as Black people, feel seen – what does transitioning from visible to hidden, and vice versa, do to us and the spaces we occupy? When are we yanked to the foreground? How are we pushed to the back? What joy exists in us defining ourselves despite this flux?

In this collection I manipulate the texture and depth of silhouetted Black figures to explore where and how these individuals fit within our society. My technique is stencil based. I record videos of people, take screenshots, make tracing paper outlines from my laptop, transpose these to masking tape using a scalpel, apply said masking tape stencils to the canvas (either after or before the application of paint) and build the paintings layer by layer before removing all tape at the end. Without having any formal art education, my technique has developed organically through exploring new ideas and trial and error.

In your captions, you reference the work of prominent poets, writers and activists such as James Baldwin and Sonia Sanchez. Is your work a response or a complement to these individuals?
My work and its relationship to contemporary activism changes depending on the piece. Some are in direct conversation with an individual or their work. For example, my painting “Catch the Fire” was inspired by Sonia Sanchez’s poem of the same name, written in 1995, in which she questions our revolutionary passion. The poem speaks about maintaining a balance of activism, harnessing personal and community power, and fighting back by living a full life whilst providing the younger generation the tools they need to resist and thrive. The piece is a family portrait, including figures of my mother, siblings, nieces, and nephews – offering a vividness to Sonia’s command to pass on the fight.

For other of my pieces, I have retroactively tied the painting’s theme to the work of various individuals that have inspired me such as Angela Davis, James Baldwin, Martin Luther King Jr and George Jackson – trying to add to the conversation these figures began through my interpretation of their work.

What excites you most about the creative community around you at the moment and what is in store for the next couple of months?
I’m most excited by cross-medium collaboration. So many Black creatives are sharing ideas and working together to develop new concepts. For my exhibition, I reached out to Brother Portrait – a lyricist I have admired for some time – to commission a number of poems that touch upon the central themes of the paintings. These concepts included Black motherhood, Sonia Sanchez’s Catch the Fire poem/the summer of 2020 and the Black female experience. These poems are displayed alongside the paintings at my show. At the launch, Brother Portrait performed these poems to a freestyle interpretative piece by a dancer called April Milliner. There was no rehearsal time but what transpired was a vivid and moving performance in which the paintings were heard through poetry and then seen via dance. This idea of multi-medium interpretation and collaboration builds up or strips away, but ultimately empowers, central themes and concepts.

I balance my artwork alongside my career as a lawyer, where I, until recently, worked in commercial disputes. Keen to work on cases that speak to my interest in social justice and inequality, I will begin a human rights law masters at Harvard in September. The course is one year and I’m keen to continue painting and creating from America. I’m not exactly sure what new ideas will be explored but I’m confident this new environment will enrich my art.

Can you talk a bit more about the intersection between your human rights legal work and your artistic process?
My work explores the contemporary Black experience, a large part of which is our relationship with, or at least understanding of, racial injustice. Whilst I am keen to avoid ‘exploitation-porn’ and focus solely on certain difficulties associated with being Black, questioning when we as Black people feel seen is a recurring theme of my art. There are several ways in which we all feel unseen: a person’s race, gender, religion, background etc. can all result in them feeling that they have to fight for recognition and representation.

A consequence of making a person or community invisible is that they become voiceless, powerless to fight back against injustices. My human rights law work seeks to alleviate this. For example, I find it extremely rewarding working on refugee/asylum cases and seeking to secure the immigration status of vulnerable individuals because it feels like the real-life development of my art – no longer just questioning when we feel seen but actually helping in establishing someone’s presence. I really enjoy moving between exploring these issues creatively and applying my human rights law knowledge to physically make a difference.

What current artists or activists do you take inspiration from?
Not having been to art school but having been raised and nurtured in a cultural environment, my artist inspirations are spread across mediums. In terms of current artists, the collective SAULT have been a large inspiration recently. Their albums ‘Untitled (Black is)’ and ‘Untitled (Rise)’ served as the soundtrack to my 2020 summer, a time in which I grappled with several difficult questions and reflections. Hearing music which so beautifully spoke to that moment was incredibly uplifting and reminded me of the joy that lies in the heart of us all.

Growing up, I felt I often had to look towards the States to find prominent activists to idolise. However, I feel a recent shift has occurred in our historical understanding of Britain’s domestic activists. Steve McQueen’s ‘Small Axe’ series was helpful in shining a light on some of these for me. Over the last few years we have seen a swelling of figures who have stepped into the activist space in a super inspiring way: Alexandra Wilson, Stormzy, Raheem Sterling, Reni-Eddo Lodge, along with longer serving activists like Afua Hirsch and George the Poet, being just a few names that come to mind.

What role is art do you believe art has in the social justice movement?
Art plays a key role in highlighting and exposing social injustices, not least because some of our most prominent artists come from oppressed communities and focus their art on giving voice to and empowering those experiences. Artists like SAULT, Steve McQueen, Dave and Joy Labinjo are good examples of this. Whilst art has always mirrored the times – asking difficult questions of the age we are living in – it feels like we as a society now expect so much more from those that we revere. Having a strong, principled position on social justice issues elevates both the art and the artist, which in turn invites us to reflect deeper on the topics they explore.

As a self-taught artist, how did you discover painting? What did this offer you as a form of expression?
A friend and I were serendipitously offered an exhibition in Nicaragua whilst travelling and painting in the region in 2017. The show’s style was abstract expressionist and if I’m honest, I didn’t really know what I was doing (!) – this painting style being quite forgiving to amateurs – but the experience birthed a confidence in my painting. I began training as a commercial solicitor on returning to London in what was a very demanding and challenging environment. It was only on moving to Paris for work in 2018 that I really embraced painting , both to instil a balance against a high-pressured job but also to explore certain social themes.

Living in a new environment and trying to make sense of my place within it, I developed my current technique and focused my paintings on the Black experience. Working and living in essentially an all-white space encouraged me to connect to certain aspects of my heritage through my art – offering me an opportunity to question some of the things I saw around me.

Can you go into a bit more detail about your specific context of London and what opportunities this has given you?
Growing up in Harlesden, going to the local church, attending the local state school and having family connections in the community, were foundational experiences that I am immensely proud of – the strong Black community felt, and continues to feel, like home. I’m very grateful to have been raised in such an environment because it instilled a respect for the other cultures I lived alongside as well as a deep love for my own, which was so beautifully displayed there.

However, I would be remiss to ignore the challenges that such surroundings present for Black people. Pressures to conform to widely accepted stereotypes weigh heavy, with such burdens sometimes coming from your own community, family or friends. Navigating the many pitfalls set by a system which has consistently failed your community is difficult. Many friends, people you know as good people but with bad opportunities or no support, end up on the wrong path. Having made it out of this environment relatively unscathed, I understand what it takes to forge yourself from this fire, but as Fannie Lou Hamer said “nobody’s free until everybody’s free” – it is this which continues to motivate my art and human rights work. 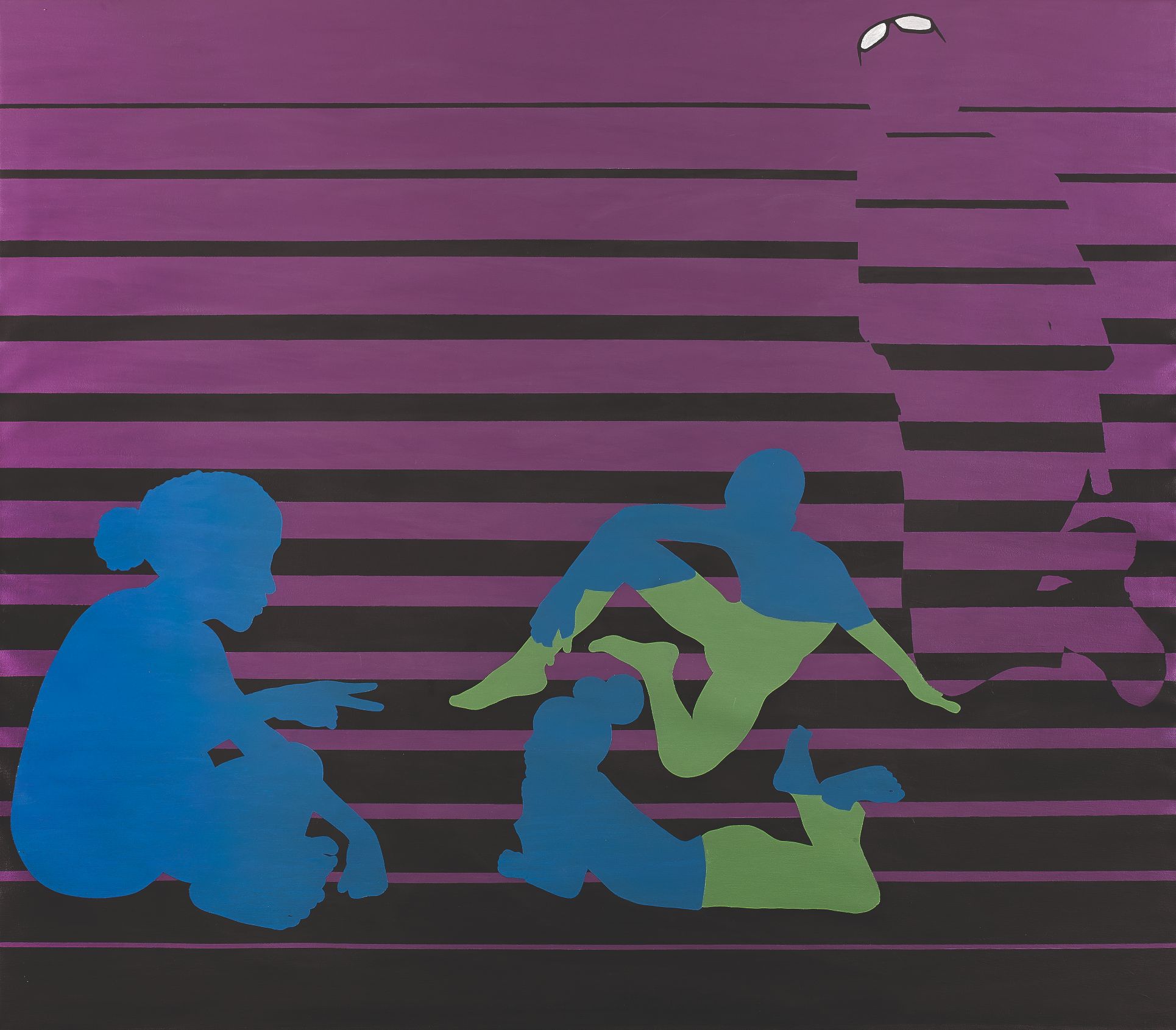