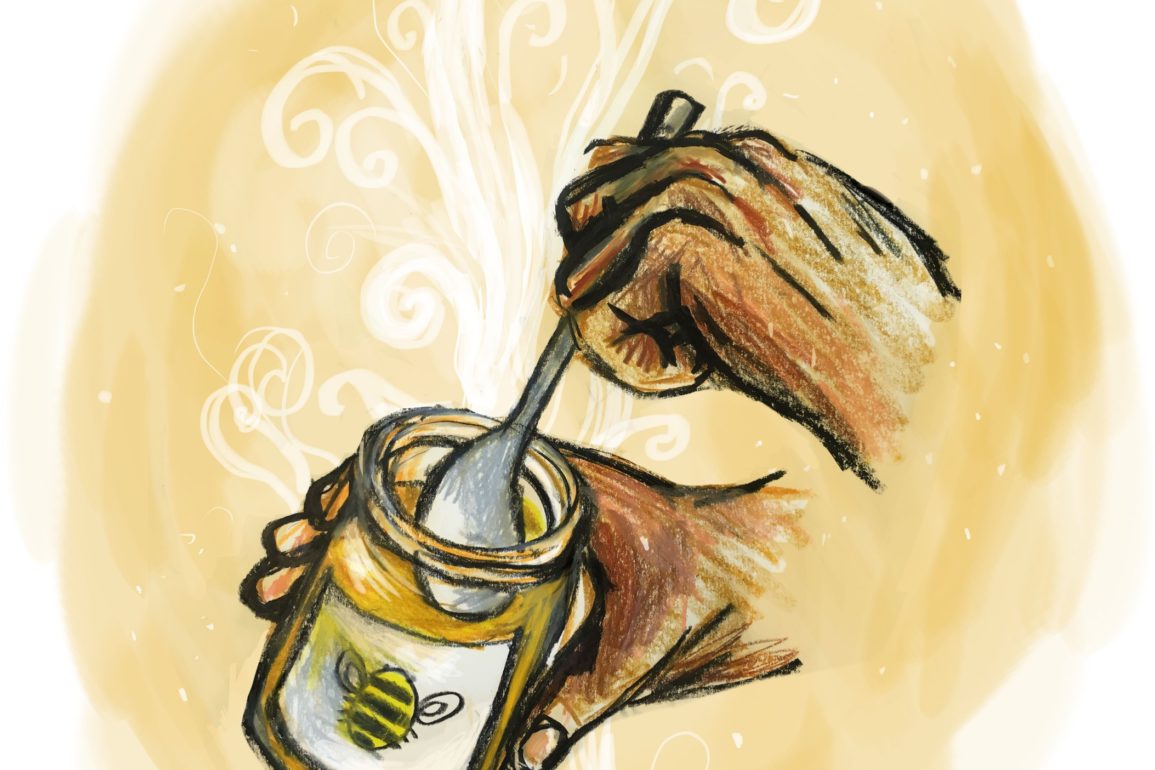 Written by Jack Down

A perfect day today, sunny, cold, with the sky flushed pink and blue. On the way to the warehouse we pass the Southern waterways, where two herons watch statuesque on an unnatural scene: 8 vans of CRS officers trudge their way through the huddle of tents on the far side of the lake. Of all the things I have told people back home, eviction is the most unexpected petty cruelty, a crude awakening that happens every other morning in Calais, dispensed with the threat of a slashed tent, of deportation, of a broken wrist. One police officer drags an empty sleeping bag through the marshy ground before dumping it – mission accomplished – ten metres away.

Dozens of volunteers arrive and congregate outside the warehouse for the morning briefing. We catch eyes of new friends across the circle and recite memorised introductions, finishing the ends of instructions. Do not encourage the rats. Wash up after yourself! Overnight there has been a good deal of rain, and the courtyard outside the warehouse is slick, spitting up onto our legs as we jumping-jack and warrior-pose our stiff bodies back into operation. Thirty volunteers have arrived from Cambridge for the day: the matter-of-factness of their cheery, fanny-packed presence – “oh, it’s only a few hours’ drive” – is astonishing. Every morning the air buzzes with a new energy. We might not get it right but we will do our best. Thank you all so much for coming.

We split off to various jobs, pulling on our aprons, collecting our crowbars, filling the space with Disco and chatter. The activity is endless: distribution being rushed to and fro, piles of clothing sifted and sorted through, boxes of donations unpacked – each an unexpected source of amusement. A suitcase worth of pink-tinted, rose-scented chapsticks is met with groans, “not more bloody women’s lip-balm”. 3000 cherry-scented had arrived the previous week. I weave my way through the warehouse, dodging trolleys and donations, dappled with the beams of sunlight that filter through the perspex roof, and which lend a saintly quality to sorting 50 Medium snoods from 50 Large. It is a cathedral of resilience.

Witnessing the warehouse, it is the scale that you first cannot quite comprehend. Mediated through a screen, it is hard to grasp the realness of the ‘crisis’ – what 1,000 people sleeping rough physically entails, let alone 100,000.

Perhaps it is the mind’s defence mechanism against overwhelming injustice – the scale overwhelms our ability to act. The sight of a thousand sleeping bags stacked to the rafters, however, is enough to bring the inconceivable into reality.

Sister Sledge is blaring in the Woodyard, where we sledge, smash, and chop our timber into firewood, distributing nearly a tonne a day. Winter has arrived in Calais like a boorish relative – early and rudely, lending a particular urgency to our activity, requiring as many hands on deck as we can muster. We are an odd family: amongst my choppers-in-arms is a cabaret dancer from the Moulin Rouge, an investment banker with caricatural eyebrows, and Thomas, a smile-wrinkled Cork man with an unfaltering positivity, a virtuosic ability for chopping kindling, and an apparently low fear of losing his fingers.

Despite our differences, we share a solidarity, a desperate desire for redundancy, and an expertise in dismantling shipping pallets. 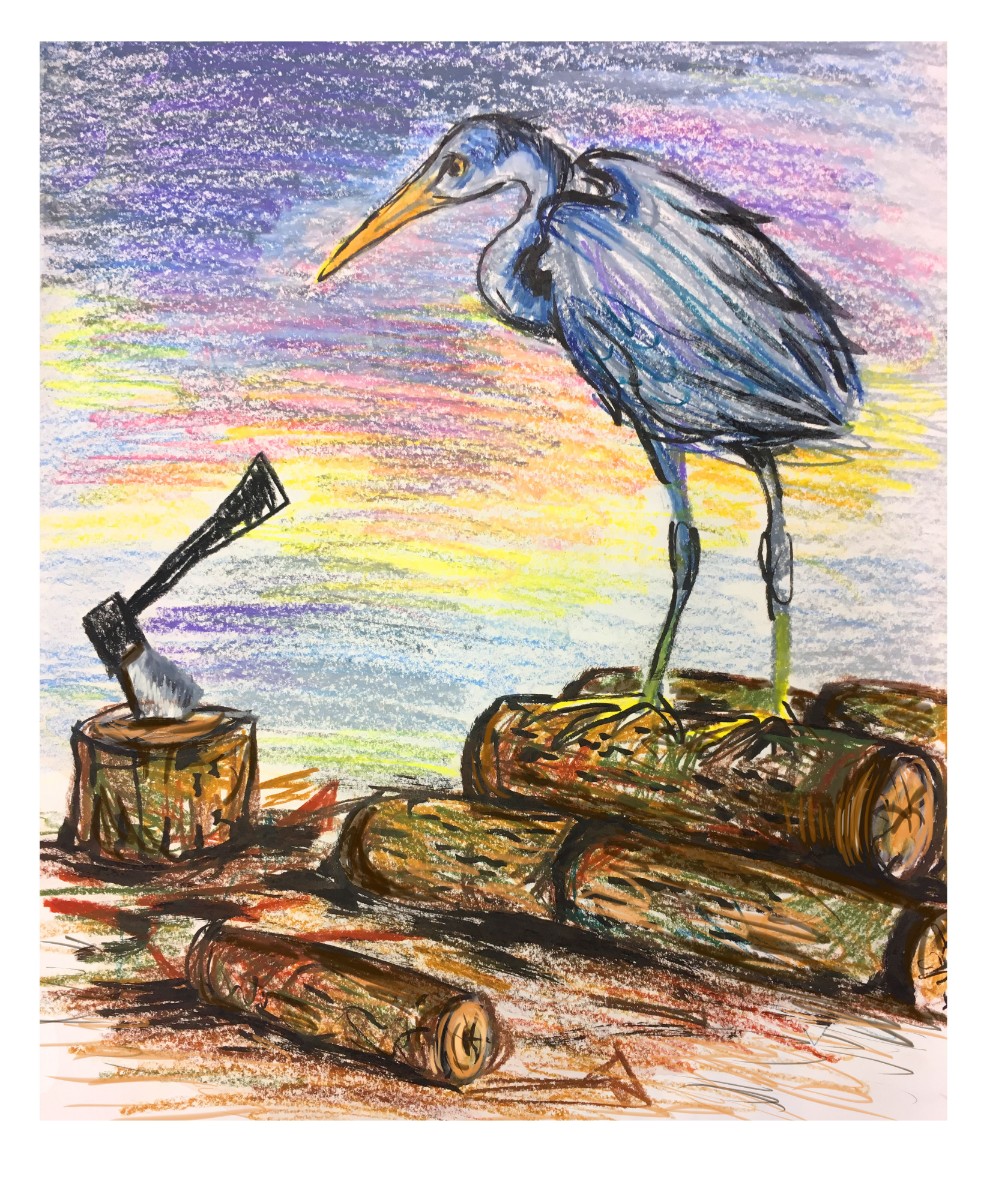 “The government’s doing nothing to help, the situation’s shit, Brexit’s coming, why should we have to be here?” Sitting under a gazebo lovingly refashioned into the woodyard ‘café’, I had fallen into conversation with a fellow volunteer, who was reflecting on the outlook of the crisis. It wasn’t the first time I’d heard some version of that question, and I couldn’t deny its truths. Although they’ve only recently returned to the splashy front pages of the press, migrants have long suffered a series of measures – enacted by both French and British governments – that seem designed to maximize inhumanity. The fences are getting higher, the dogs more vicious, the hotels more full with police. So, we vent, again and again, why must it be like this, and how can we go on. I turn to a long-term volunteer, and ask him how he deals with this tendency to the pessimistic.

“Well, it’s not easy, all conversations lead to the same frustrations, the same dead ends. I think you have to be wary of getting bogged down. I just go out, every day, and I chop wood. It’s the best you can do.”

It’s tiring business, physically, but also emotionally – as we keep being faced with the scale of the task, and our unsuitedness for addressing it. And yet. And yet, day after day after day, the warehouse buzzes with an energy – one that I’m sure isn’t only due to the sustaining curries we’re served for lunch. The Refugee Community Kitchen keep the cohort running on a strict diet of vegetable stews, consistently delicious and soothing, served with humanity and mismatched crockery. One of the Cambridge lot has offered to wash up – by hand – for the entire warehouse. He is still scrubbing, smiling, when I pass three hours later.

Over lunch, stories flicker between the groups sat at the canteens and throughout the front yard, stories of other humanitarian efforts, of evictions, of small victories. One day, after lunch, a volunteer passes round a tub of donated bubblegum lollipops. Soon after, we heard the news that 12 Iranian refugees – including 3 children – had sailed across the Channel to a better life in the UK. There wasn’t a non-artificially-blue tongue or unsmiling face in the warehouse.

Against the grey sky and the dull frozen earth, the tents at Grande Synthe are a colourful mess of blue, green, and red. There is ceaseless activity on distro: in all directions men in parkas and jeans and shalwar kameez trudge with bags of groceries donated by other distribution teams; a group of old men slowly trade playing cards, guarding their hands; a child runs past with a stick, lost in play. We walk between groups, delivering wood to the fireside, and are received with a variety of greetings. The Sudanese men are known to go in for the shoulder bump. Everyone speaks; it is surprisingly good-humoured, especially when we join a group of Afghans for chai. We sit around under the make-do cover of a tarpaulin, eyes watering from the smoke that whips from the fire. The chai bubbles in a pot, rich with milk – and even more sugar. Yesal scoops in another pot of honey, laughing at the shock on my face.

“This is proper chai, Afghan chai”, he smiles with a quiet pride. 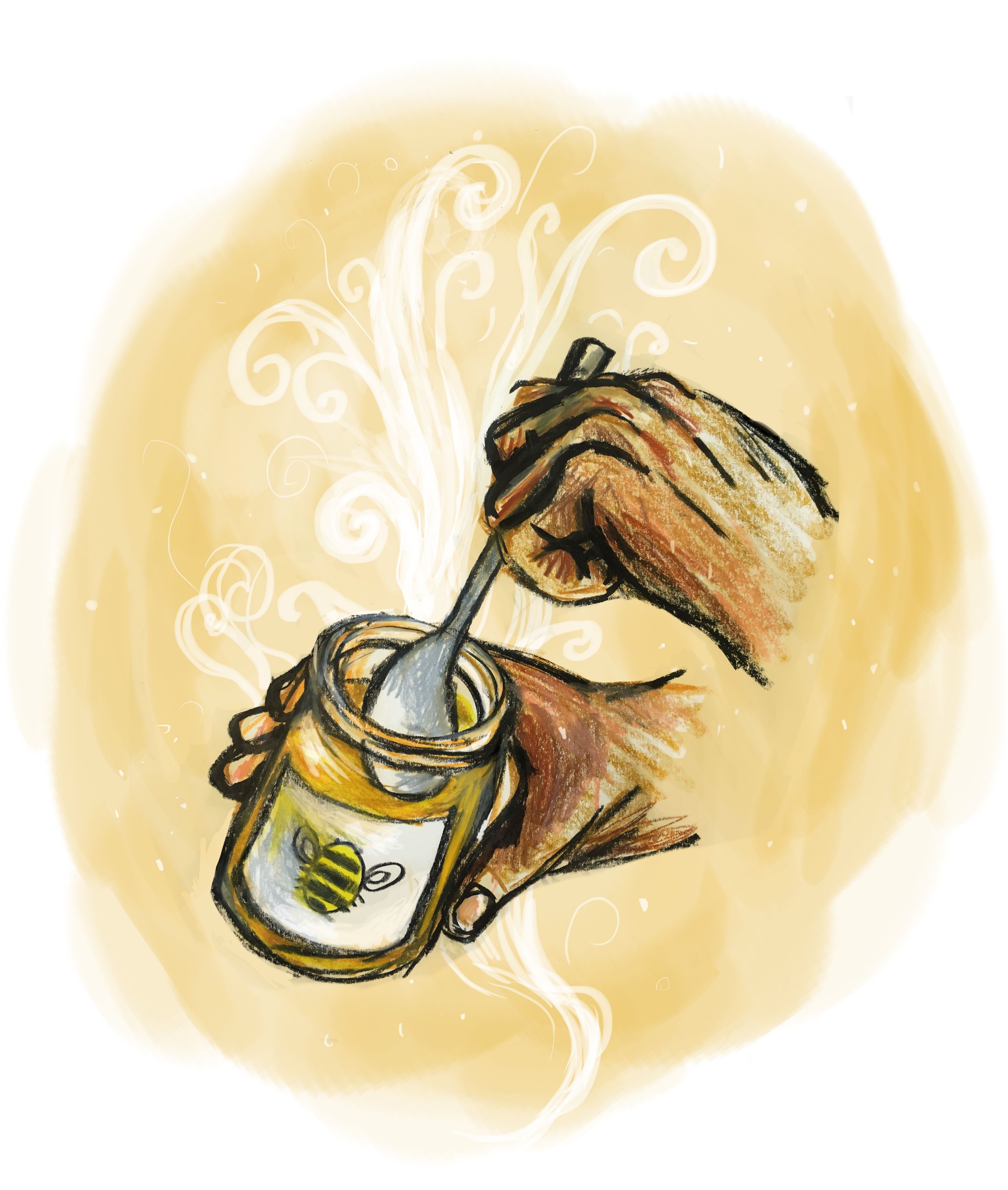 Later, a contrary experience. As we round the corner from the warehouse, the road is blocked by three riot vans. Behind one rolls and writhes a pair of legs. A young man is thrashing across the road, scrabbling at the pepper spray in his eyes, and sobbing with a guttural, unreal noise. The Human Rights team have already arrived, and are filming the CRS, who threaten his friends, wielding their pepper spray canisters with nonchalance. Habibi, his friend soothes, habibi, as he gathers his shoes, habibi. Across the scene, the police share jokes and cigarettes with each other as they wait for the marionette’s dance to settle, whilst aid workers and refugees wash his face with water. “The police, two volunteer organizations watching helplessly, his friends standing by”, the coordinator next to me surveys, “it’s crazy, man … like a visual metaphor for the whole situation”.

It is the boot in the face, the brutish reality of the rhetoric that we allow to flourish. 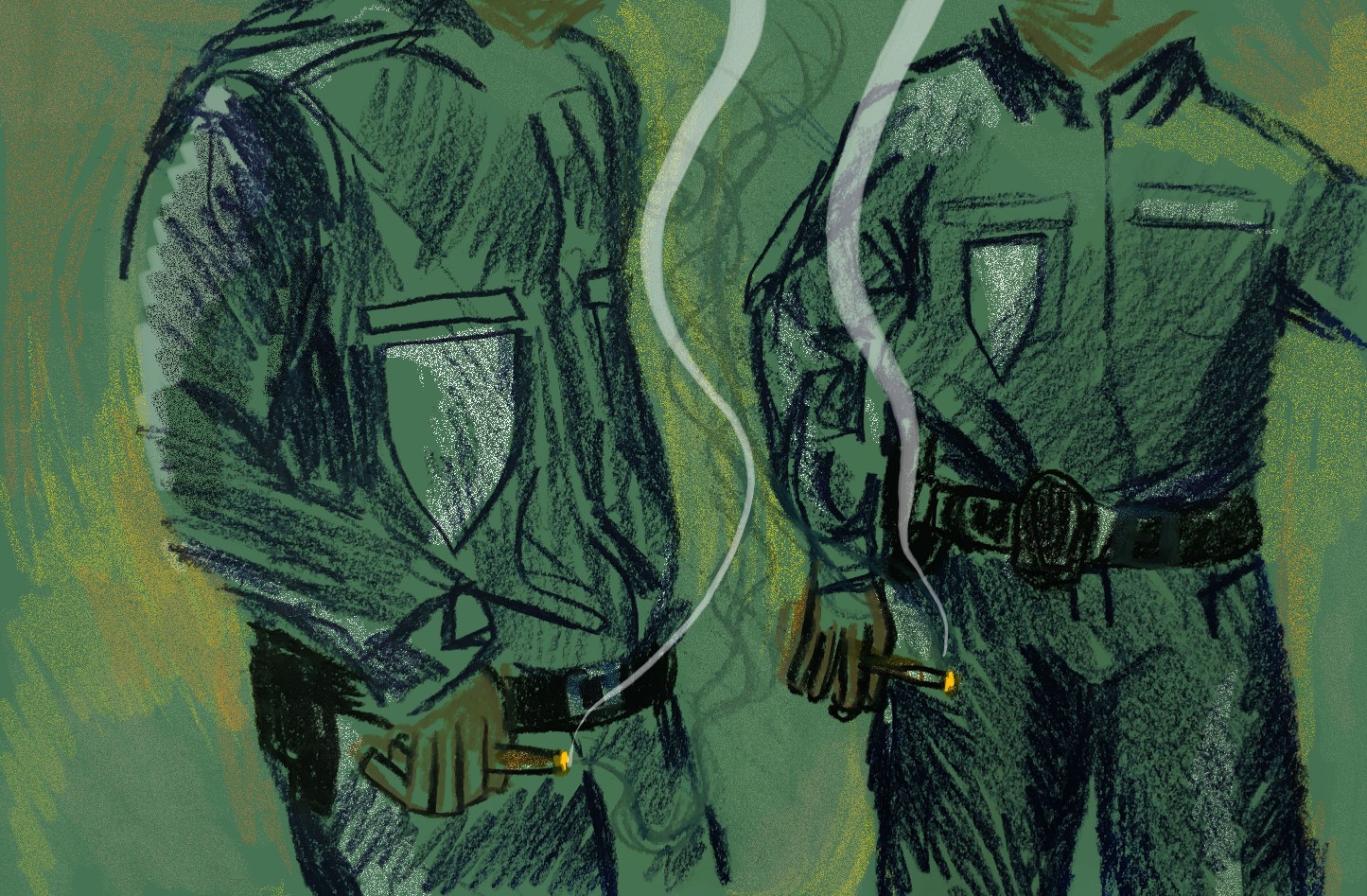 It is dusk now, and the sky has again set a coastal peach. The kitchen, warehouse, and woodyard are quiet for the time being, punctuated only by the slamming doors of vans preparing for the evening distribution. A team of volunteers huddle by the food, fretting, Is the bread too stale? Will the guys like the food? Will it remind them of home? It will be a cold and trying night, but we have done what we can to make it brief and temporary. After saying various until tomorrows, we return to our homes to cook, recuperate, and share wine with each other. The gilet jaunes have blockaded the entrance to the supermarkets, so we will tonight be indulging in a dinner of cheese and bread. Someone is always leaving, so we make our goodbye – it is a hopeful goodbye, made in the knowledge that, for however short a time, we together have made a small improvement to someone’s situation.

So if you find yourself feeling helpless, and unsure of what to do, head over to Calais – even for a day – and go out and chop wood. And don’t forget to wash up.