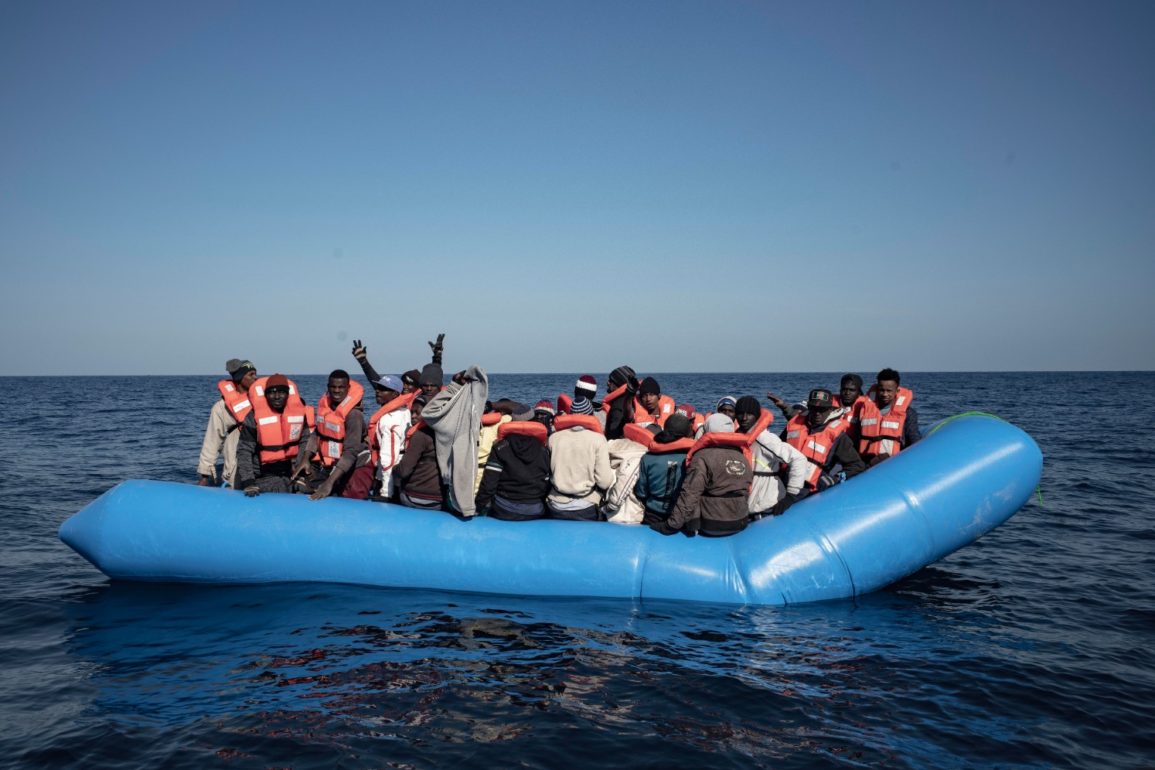 The Mediterranean Sea, Human Rights and Accountability: what the Sea-Watch Saga says about sea solidarity and the EU-Libya deal 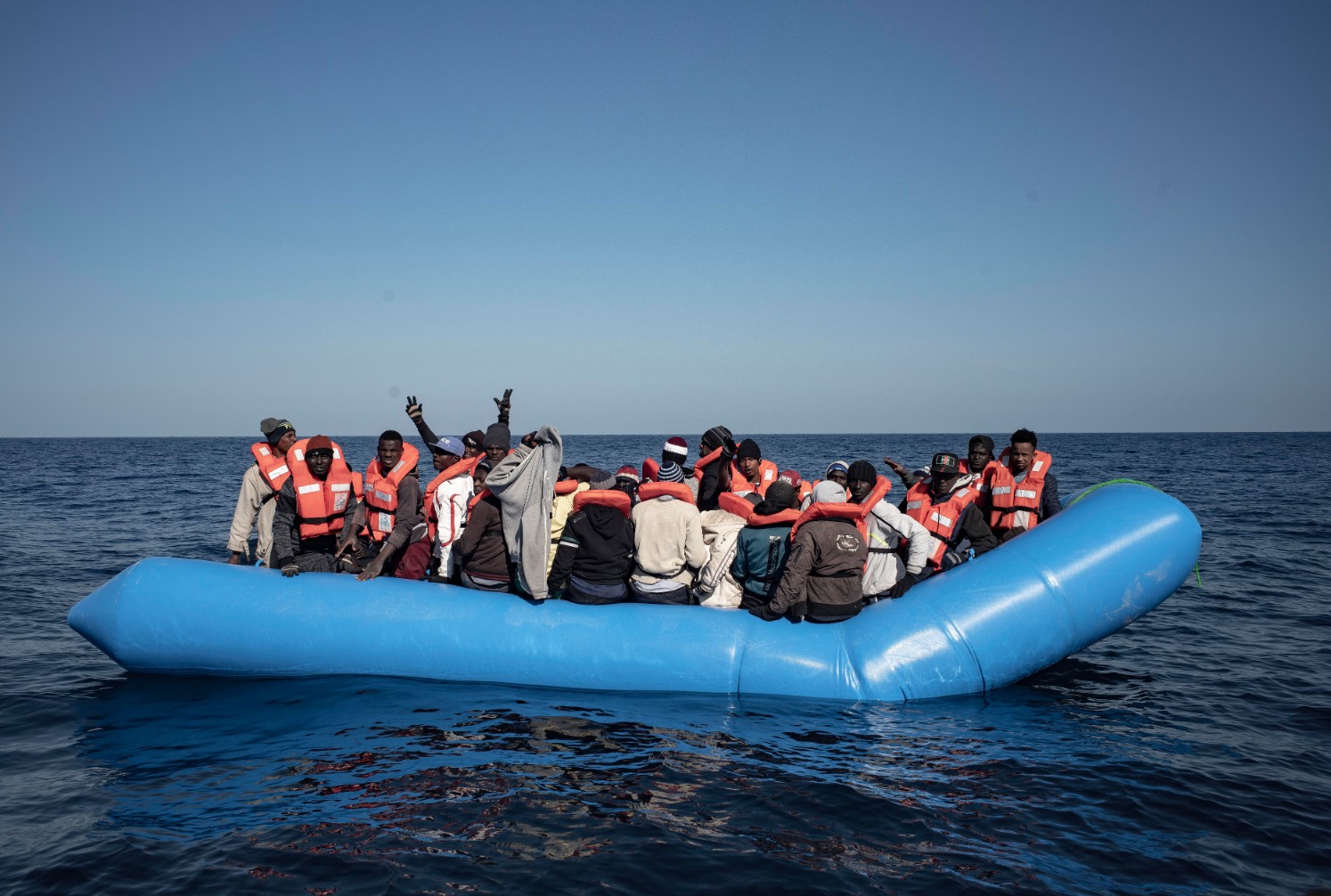 On January 19 2019, 47 migrants were rescued off the coast of Libya by the crew of Sea Watch 3. This is the moment that they were told they would be safe. Photo by Doug Kuntz.

Today there are no rescue ships operating in the Mediterranean Sea.

The Sea Watch 3, the last active vessel of this kind, is being held in the port of Catania for “technical irregularities” and concerns over “breaching navigation safety.”

The crew and the 47 people they rescued- a figure which includes 15 children- were finally allowed to disembark on the 31st January after 12 days at sea.

The crew members were questioned for “assisting illegal immigration” but have since been cleared by Catanian Prosecutor Carmelo Zuccaro after investigations did not establish any criminal responsibility.

The Sea-Watch 3 remains immobilised in port, unable to carry out its vital work- a similar fate to other rescue vessels.

At the end of last year, the Aquarius was forced to end operations after the revocation of its registration and an order of seizure from Italian Prosecutors. Proactiva Open Arms is a Spanish NGO whose ship Open Arms has been blocked from leaving the port of Barcelona since January 9th. The German NGO Lifeline has had their vessel of the same name confiscated under a Maltese court order after 234 migrants docked in June 2018. The Captain faces criminal charges.

These are but a handful of numerous examples of sea solidarity work being shut down through administrative obstructions and paper shuffling.

Whether rescue ships are present or not, one of the most perilous migration routes in the world is still attempted everyday by those whose home has become, in the words of poet Warsan Shire, “the mouth of a shark.”

This year, over 200 people have drowned in the Mediterranean.

The majority of these deaths are recorded off of the Libyan coast. The 47 rescued by Sea-Watch were fleeing from here too. Some had spent years in detention. Their experience of this place is worn on their body, painfully evident. 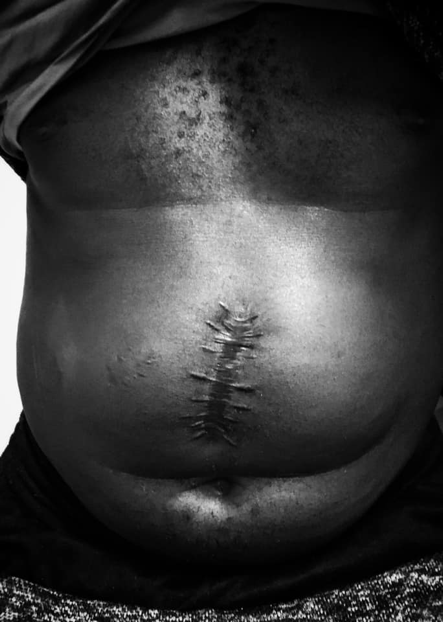 The scars in this photo belong to Doro, whose story has been shared thousands of times on social media. In Libya, he was repeatedly tortured. He lost sight in one eye after being smashed in the face with a Kalashnikov rifle. He was starved, extorted and sold as a slave.

Before being rescued by the crew of Sea-Watch 3, Doro had twice attempted to escape the horrors of Libya and both times was caught by the Libyan Coast Guard. Returned, (re)imprisoned, (re)tortured and repeatedly sold into slavery.

This is the EU-Libya deal in action.

In place since 2017, it is an ‘at-source’ attempt to stem the flow of migration into Europe. 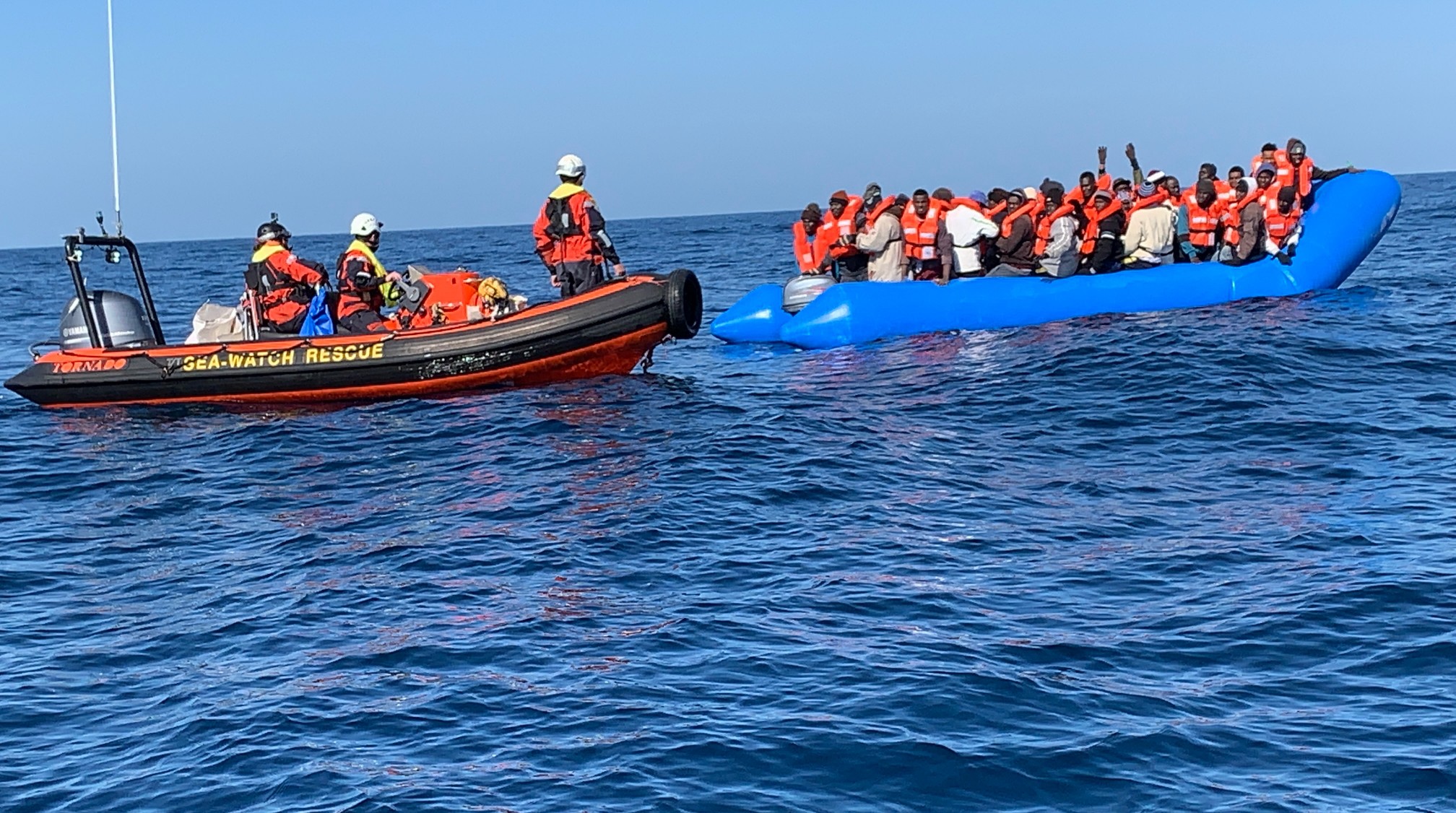 The difference between the NGO- operated rescue missions and the operations of the Libyan Coast Guard could not be starker, strikingly captured in this video from The New York Times. Libyan interception may mean that people do not reach Europe, but it does not necessarily mean that these lives are saved at sea, or respected on land.

A Libyan Coast Guard kicks a migrant while 20 others drown during this ‘rescue’ mission. Still from The New York Times Opinion Video ‘How Europe Outsources Suffering as Migrants Drown.’

When Doro made his third flight from Libya, the Sea-Watch 3 was the last remaining humanitarian rescue vessel in the Mediterranean. Had this vessel not been active, Doro would today again be back in a hellhole, his scars even deeper than the ones he bears now.

What we are really talking about when we talk about the EU-Libya deal is refoulement; a process that has become so effective for Europe that one commentator has referred to this policy as a ‘refoulement’ industry. And it’s not hard to understand why this language is used when you start counting the money, totalling tens of millions of euros, which fund Libyan Coat Guard operations.

This is the EU’s externalisation of migration control.

What the EU (unconvincingly) pretends it can also outsource are its human rights obligations. 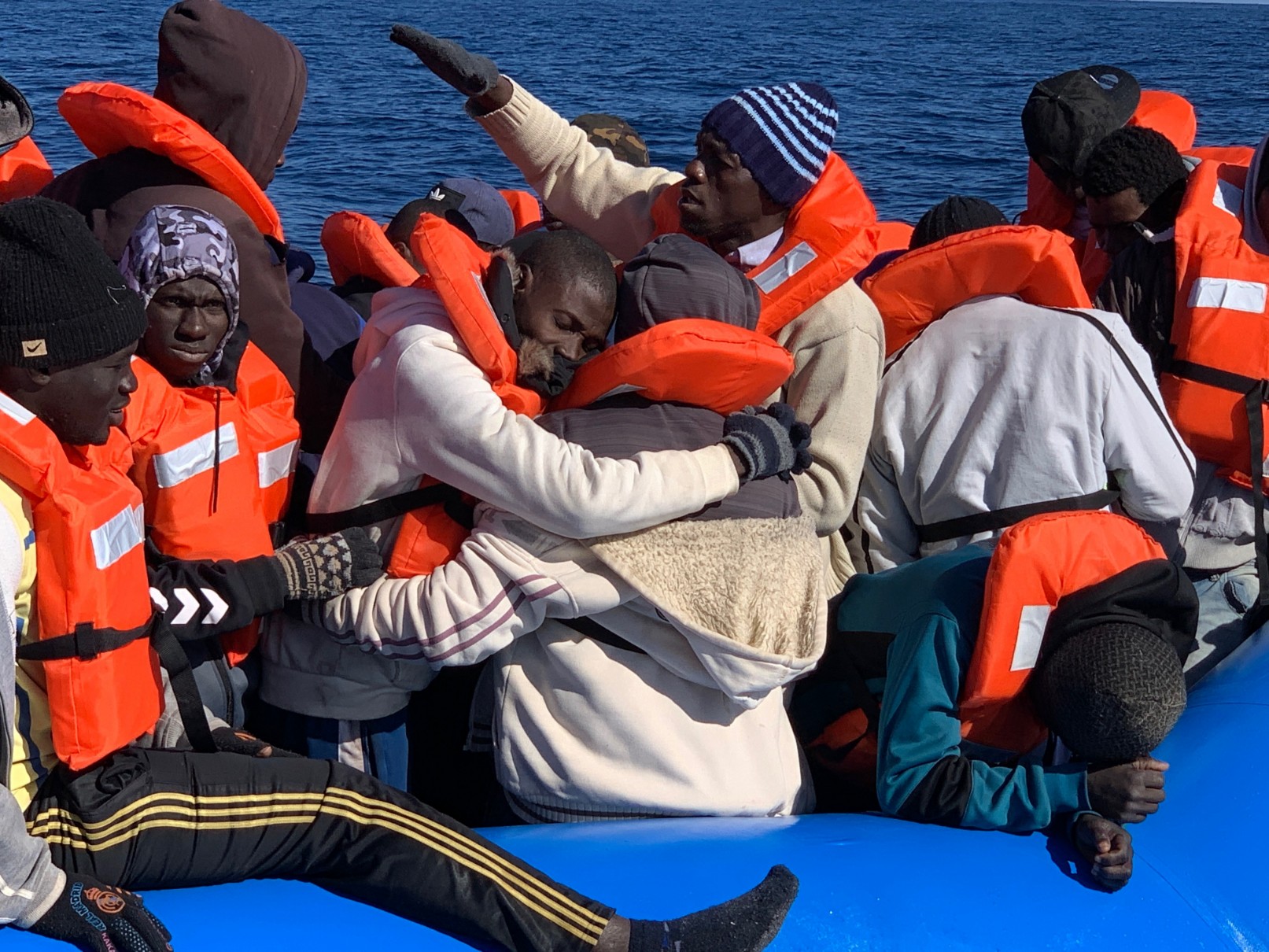 The prohibition against refoulement is the cornerstone of the 1951 Refugee Convention (CSR) and a non-derogable principle that people cannot be returned to places where they face “serious threats to their life or freedom.” The well-documented situation in Libya incontrovertibly meets this criterion.

The fact that such refoulement happens at sea does not make this a grey area. International Maritime Law requires that a shipmaster “render assistance to those in distress at sea without regard to their nationality, status or the circumstances in which they are found.” Where those rescued are seeking asylum, International Refugee Law requires that survivors are delivered to a place of safety where they can register their claim. Crucially, Libya is not party to the CSR so protection seekers have no legal avenue to pursue.

The Location of Theory: on ‘Nego-Feminism’

Moreover, a state is bound to its human rights obligations extraterritorially where this state has established effective control and authority outside its territory.

The operations of the Libyan Coast Guard are facilitated by the enormous funding, alongside training and surveillance support and assistance, rendered by European states.

Arguing that the effective control and authority threshold has been met, and based on The New York Times footage above, a case has been filed against Italy at the European Court of Human Rights by the Global Legal Action Network and the Association for Juridical Studies on Immigration. This action will elaborate the Court’s stance on extraterritorial accountability.

For now though, imagine for a moment that we were not talking about an expanse of sea; that this was collapsed, creating a land border between Libya and Italy, traversable by foot. Also imagine Italy training and funding a sort of Libyan border force to intercept protection seekers and return them to Libya. Would we argue that Italy is not responsible here?

We should not allow a few hundred kilometres of sea to dull our sense of accountability.

Rescue ships operating in this context subvert the EU’s externalisation trend by physically bringing those they have rescued to Europe’s shores; forcing those states to be accountable for these lives, and fulfil the human rights obligations they have towards them; of safety and of the ability to claim asylum amongst others. Blockading this humanitarian rescue work removes the actors who are most visibly and most consistently holding Europe to account. 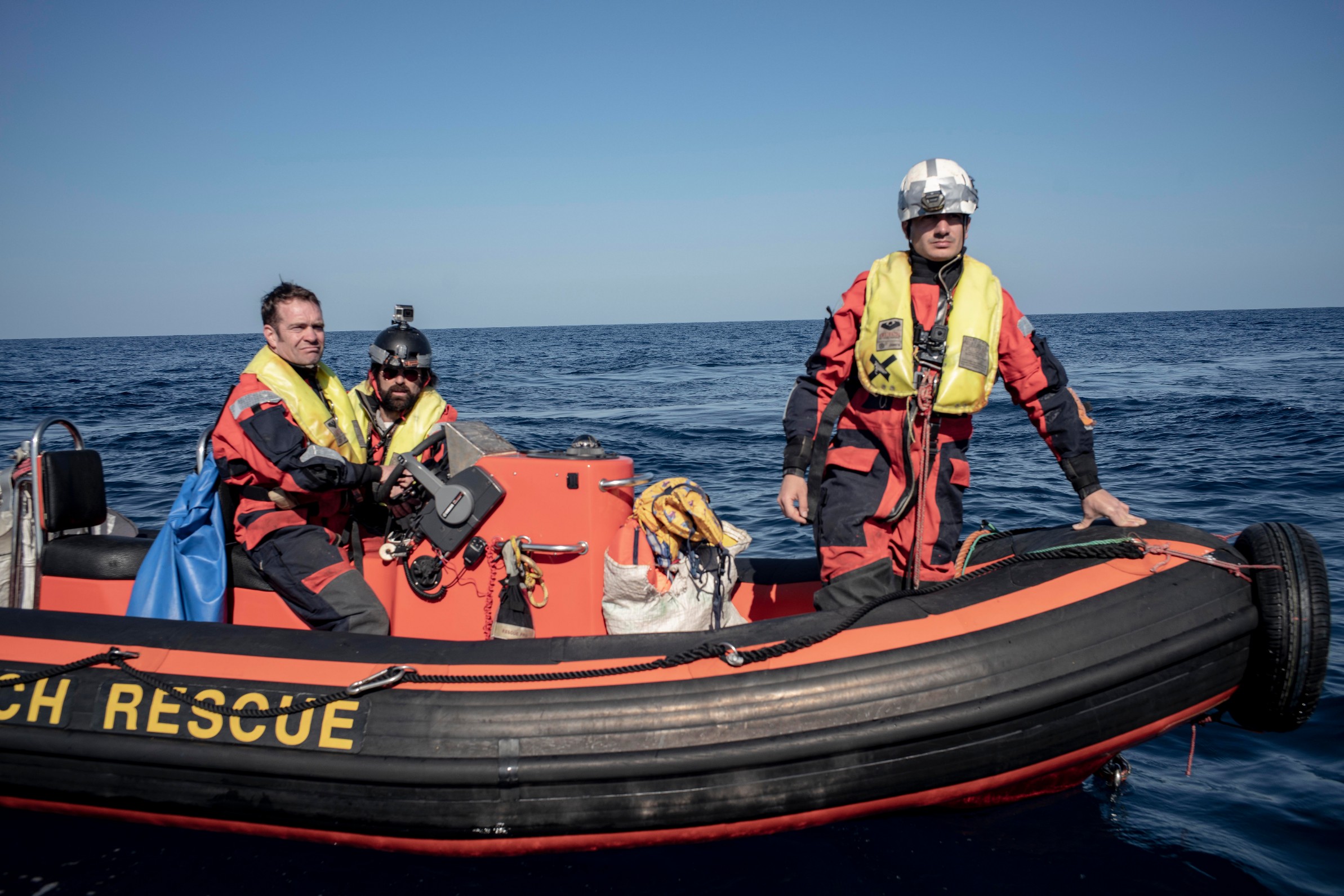 We do not know how many refugees and migrants are dying in Libya as a result of this EU policy. What is certain, however, is that the operations of the Libyan Coast Guard do not constitute rescue but refoulement.
With no remaining rescue vessels operating, who is forcing responsibility on this issue?

We must be vocal about our support for humanitarian rescue missions and those who work on board.

We must also be adamant in the accountability that Europe must bear for facilitating human rights violations in the Mediterranean Sea and in Libya. 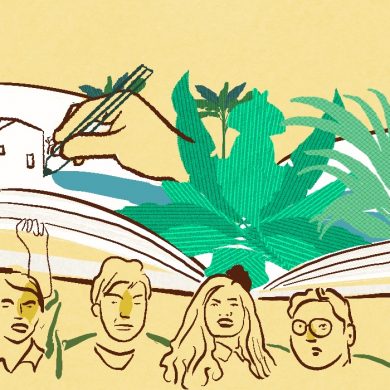