Our house is on fire

words by Sian Berry, co-leader of the Green Party

Imagine how different the world might be if ecocide was an international crime. Just as the UN sanctions those who commit war crimes, genocide and other commonly accepted atrocities, imagine if global institutions had the power to punish governments and corporations responsible for wanton acts of significant environmental destruction. It almost actually happened. In the 1990s, an early draft of the Rome statute of the International Criminal Court included ecocide as a crime, but it was dropped by the final version. What a transformation in justice we narrowly missed creating.

When lawyer Polly Higgins discovered this during research, she revived the idea – quitting a high paying job to dedicate herself fully to advancing the idea, writing books on the subject, advocating and lobbying, even submitting a concrete proposal to the UN in 2010 which led to a mock trial. It was so sad when she died of cancer earlier this year, bringing her personal fight for environmental justice to a close. But as a new wave of campaigners continue her work, I believe history will come to see Polly as a woman who changed the course of history.

As I write these words in Autumn 2019, one of the most horrifying acts of ecocide in recent history is unfolding in front of our very eyes. The Amazon rainforest is on fire. When Notre Dame burned, we saw philanthropists pledging billions and wall to wall coverage across TV and print. But when the lungs of our planet are smothered in enough smoke to literally block out the sun in the middle of the day, we get a near media blackout and billions of people looking the other way. Yet, it’s hard to think of a more important story.

The Amazon provides an astonishing 20 per cent of our planet’s oxygen, and gives home to about a million indigenous people and countless irreplaceable ecosystems. These ecosystems absorb millions of tonnes of carbon each year, but by burning and slashing, we release that carbon. With enough dieback and deforestation, we threaten to hit a tipping point where the Amazon becomes a carbon source rather than a carbon sink. If this happens, the consequences for runaway climate breakdown will be unthinkable.

That’s one of the reasons why it’s so frightening to see deforestation rates reach an area the size of Manhattan every day, along with a record 72,000 wildfires this year alone – an 84 per cent increase on last year. Some scientists estimate that if we lose another fifth of the Amazon, it will trigger a complete system collapse which no human intervention could stop. When Swedish activist Greta Thunberg said “our house is on fire” in her famous speeches, she probably originally meant it as a metaphor. Now it is actually true.

Because of the lack of media coverage of this brutality, it can be easy to think that the wildfires of the Amazon are just a freak aberration, a natural disaster, or the tragic consequence of an already warming world. Undoubtedly, our climate emergency is fanning the flames, just as it ignites the rising number of wildfires across the planet. But make no mistake about one thing: this is part of a deliberate attempt to destroy the Amazon, by the fascist president of Brazil, Jair Bolsonaro.

Where most of us see one of the world’s most precious ecosystems, Bolsonaro and his government see an opportunity to make a quick buck. They want to raze the forest as quickly as they can, to open up the space for ‘development’ – which is to say cattle, soy crops and mining. Pleas about the climatic impacts of such a policy will go unheard, because Bolsonaro is also a loud and proud climate denier. He will destroy the whole rainforest without a second thought, and leaked documents secured by democraciaAbierta confirm that this is precisely the plan. If anything is what Polly Higgins had in mind when she was calling for ecocide to be made a crime, it’s this.

The indigenous peoples of the Amazon have shown strength, determination and resilience in the face of colonisation and destruction for generations, and they lead the fight against this latest assault today. How best can the international community show our solidarity at such a pivotal time for our planet? I believe Polly’s call to make ecocide a crime in international law is an idea whose time has come – in fact, it’s desperately overdue. Yes, there are some immediate actions Governments could take to protect the Amazon, from blocking the Mercosur trade deal, to imposing sanctions on Brazil. But few actions would be more swiftly effective than the application of an ecocide law.

Sex(ist) tech: yet another feminist minefield

Earlier this year, very shortly after Polly’s untimely death, it was amazing to see Extinction Rebellion name one of their signature boats in her honour, calling for ecocide to be made a crime from the city centres of our nation’s capitals. If it seemed outlandish or unrealistic to anyone who saw the protests at the time, a few short months later, the blazing Amazon shows the world that Polly and the protesters were right. Majestic ecosystems like the Amazon are home to a huge diversity of life, and they prop up the planetary support systems on which we depend. They clearly must be protected by law.

For too long, the call for ecocide has been dismissed with an air of misogyny; the good intentions of a woman with a bleeding heart for Mother Earth. Perhaps this is because strongmen leaders and corporate tearaways are actually very frightened of it. In reality, an ecocide law would be ferocious, and these Amazon fires show that it could even stand up to fascism. In her lifetime, Polly Higgins managed to secure a mock trial for ecocide, to show that the idea was viable. In her memory, we need to make sure these trials happen for real – and Bolsonaro should be one of the first in the dock.

Sian Berry is the co-leader of the Green Party of England and Wales. She is a councillor in Camden, a London Assembly Member, and is running to be London’s first Green mayor in 2020. @sianberry 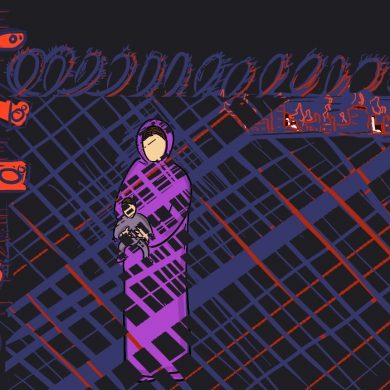