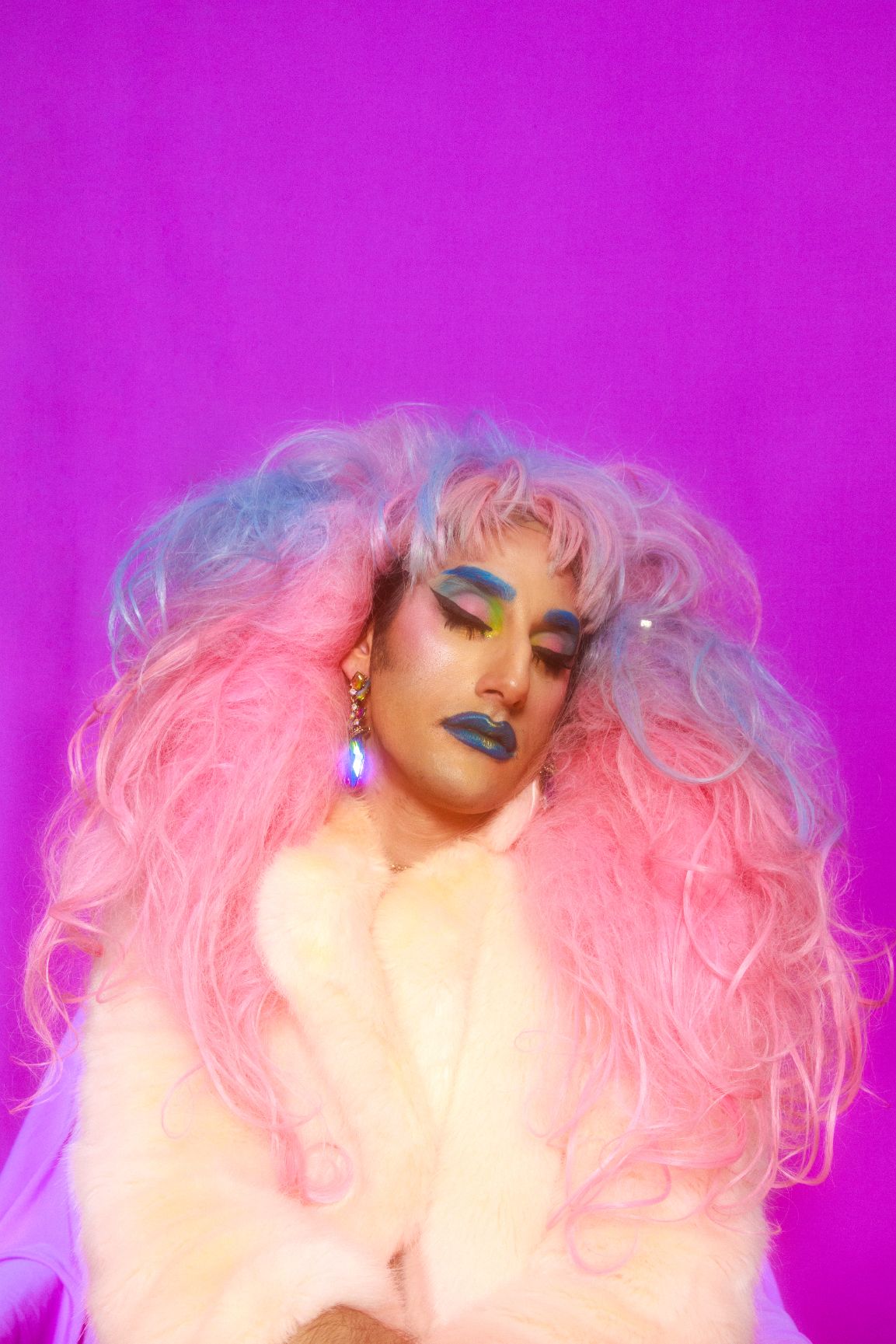 Hannah Robathan and Isabella Pearce in conversation with Amrou Al-Kadhi

Following the long-awaited release of Amrou Al-Khadhi’s Life as a Unicorn: A Journey from Shame to Pride and Everything in Between, shado sat down with the author, director and performer to find out more about their autobiography. The book explores the assumed contradiction of identity and culture through Amrou’s artful documentation of childhood, family, and the search for belonging.

We chatted to Amrou about the importance of self-acceptance, gender fluidity and positive role models – while also delving deeper into their drag persona Glamrou, with whom we had the opportunity to shoot alongside photographer Alia Romagnoli and makeup artist Rebecca Butterworth.

“When people correctly use my preferred pronouns, it relaxes me, as if I’m being soaked in a lavender bath, making me feel seen as a person free from gender binaries.” (p. 102).

What are your thoughts on ‘they’ being chosen as the word of the decade and what are some of the barriers that you have seen/experiences in the mainstream with society at large accepting this?

I find it funny that it was selected to be the word of the year, only because they has been used a singular pronoun for centuries; Shakespeare used it for instance. Also, we all use the they pronoun every single day when we are referring to someone whose gender we don’t know. For instance, if I said, my friend is coming over, the go to response would be, ‘Oh, who are they / what’s their name / when are they coming over.’

Some people find it confusing grammatically, and I get that, especially because our language has been so gendered, and this is systemically engrained in us. There are those who refuse to use it for malign reasons – I was recently on Sky News with the editor of Spiked, Brendan O’Neil, who essentially believes that asking people to use your preferred pronoun is a violation of free speech…I’ve heard this argument a lot (it’s the same group of people who think it is more offensive to accuse someone of being racist than to actually be racist). It’s essentially people dressing up their intolerance by saying that people who have a preferred pronoun outside their assigned sex at brith are violating free-language, but it really only speaks to their intolerance and their gross misunderstanding of gender. They’re fucking stupid people.

I always think – look around…the world is insanely complicated? I mean Jesus…Octopuses can change colour, shape and size at will…our brains make billions of neural decisions every second…but you can’t for a second understand that some people’s genders don’t sit in the binary framework of sex? These people lack basic respect.

“Most of all, this is a book about my mother. It’s the journey of how we lost and found each other, about forgiveness, understanding, hope – and the life-long search for belonging.”

Most people go through a process where, on growing up, they realise their parents are people, too – imperfect and also affected by their own problems outside of parental “duty” and roles. In your case, of course, this was far more complex – but, how did the realisation that your mother was trapped in the same patriarchal structure as you play a part in helping the rebuilding of your relationship?

Pretty profoundly. It’s been a complicated process with my mother, because she was the source of most of my trauma growing up, and the person who has been most disapproving of who I am. The first part of the process was I suppose remembering all the things I love about her through drag – dressing up as her, emulating her in my performances (she’s a very melodramatic woman, and probably my biggest drag inspiration). So the first stage of the recovery was rescuing the images and feelings I had about her before shit got complicated through male-up and clothing.

Growing up in the Middle-East was hard, and my mother more than anyone knows that. I think in another life she would have been a Hollywood star – but her theatrics are limited to hosting domestic events and the like. I think part of the reason she was so emotionally cruel to me was a real jealousy at the fact that I was feminine and yet somehow liberated. I have been freed to follow my own path, and I think part of forgiving her was me understanding that her punishment of me was really a projection, punishing the fact that she was never able to be as free as me.

It’s funny, because the women in Arab households often tend to be the enforcers of the patriarchy – the men are silent oppressers in the background, but it is the mother’s domestic position that means that she must enforce the rules. Some perspective on that helped with the healing, certainly.

Can you talk a bit more about how quantum physics helped you understand queer identity?

In short, quantum physics shows us that what is happening on a macroscopic level in terms of the laws of physics are completely constructed – they work in theory, but when you look at what is going on at the very smallest of levels, inside subatomic particles, they tell a completely different story. Basically, Quantum Physics is to Newtonian Physics what queer theory is to heteronormativity…I find a lot of solace in the fact that on a physical level, we know that reality is entirely constructed. For instance, though one version of `n event might play out in reality, we can see that on a quantum level, subatomic particles can be in many places at once…multiple version of the same event that reality has constructed are happening, we just can’t see them…if not even reality is ‘real,’ why so are any constructs of gender / sexual identity? In the way queer theory teaches us to deconstruct everything we have been taught to learn from reality, so to does Quantum Physics, and a completely scientific level.

“Till this day the cisgender white male body has endured as the trophy within the gay community”.

Can you comment on some of the gender restrictions and racial hierarchies you have experienced within the gay community and how this can be understood in relation to colonial structures?

A lot of gay men, who have suffered intense social exclusion, compensate for this by performing this kind of exclusion on those with less privileges than them. I have experienced a lot of racism and transphobia from white cis gay men, often masculine presenting. It’s as if their trauma from being gay in a world that continues to other gay men means they want so desperately to assimilate, that they cannot tolerate femme / trans identities, and or people of colour.

We only need to see how the Far Right have co-opted much of the gay vote – they are able to persuade to white privileged cis gay men that minorities are going to come for their rights, and we have seen a spike of racism and Islamophobia from the gay scene as a result.

I find it heart-breaking that gay men replicate cycles of trauma on each other, rather than on the system that orchestrated this trauma to begin with.

Positive stories are incredibly important, and while your memoir is heart-wrenching at many points, its overall arc sees an uplifting ending. Do you think that it is because of this that you were able to document your life and make this memoir or was this something you always wanted to create?

I’m a real believe in the political power of hope. Especially with the current political climate. In the face of trauma, queer people have always responded with creativity and hope – that’s what I love about our community. I also think people often expect minority identities to have stories that are laced with hurt – but in spite of all that, we can be full of hope and positivity too, and more than anything, I think I owe it my community to celebrate it, not just despair what we’ve suffered.

Buy Life as a Unicorn here