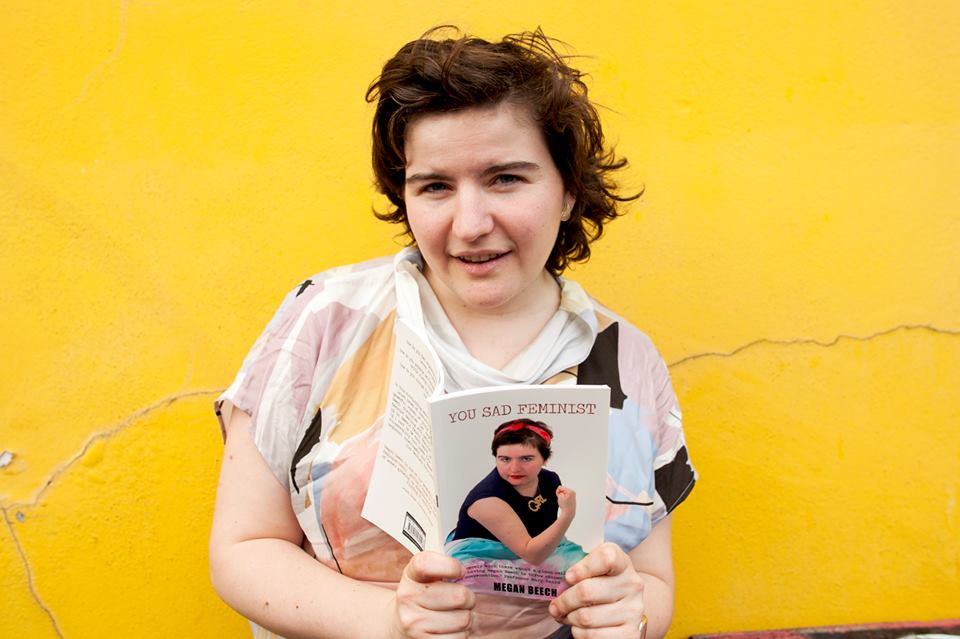 In conversation with Megan Beech

Megan Beech is a performance poet and activist. She was the winner of the Poetry Society’s SLAMbassadors national youth slam in 2011. She has performed at venues including the Royal Albert Hall, Parliament, the Southbank Centre, Glastonbury Festival and Cheltenham Literature Festival. Her debut collection ‘When I Grow Up I Want to be Mary Beard’ was published in 2013, and her latest book ‘You Sad Feminist’ was released in 2017.

She has performed for Sky One’s ‘Russell Howard Hour’ and the BBC iPlayer series ‘Women Who Spit’. She was featured in The Guardian lists of ‘inspiring young feminists in 2014’ and ‘Must Read Books of the Year 2014’ and Evening Standard’s list of ‘Ten 21st Century feminist icons’. Her work has been profiled in publications including The New Yorker, The Atlantic, The Guardian, Huffington Post, Evening Standard and Grazia magazine.

At our launch we were lucky enough to hear her powerful poem ‘Women of the World’ which was commissioned by the UN for the launch of their Global Development Goals, one of which is Gender Equality by 2030 (this includes the eradication of the practice of FGM).

Can you introduce yourself?

My name is Megan Beech. I’m a performance poet and activist for a variety of causes to do with intersectional feminism and mental health. I live in Cambridge, but I work a lot in London. I’m also studying for a PhD on 19th century literature, weirdly the least feminist thing in the world, but trying to inject some feminism into work by old dead white dudes.

I’ve written a couple of poetry books and I’m currently working on a novel primarily about the experience of mental illness, quite autobiographical, about the ways that we can talk about women experiencing mental illness without being sensationalist. It’s not all crying on the bathroom floor, it’s a lot about doing the day to day. Most narratives about females having mental health issues are written by men and that’s inadequate.
So, what inspires your art?

I’ve always wanted to be able to marry what I think about social issues with performing or writing. I’ve always written, but it’s only in the last couple of years really that I’ve been able to find a style to communicate bigger ideas to as wide an audience as possible. So, my favourite thing is doing a gig and afterwards someone says to me “oh, I’ve never really thought about that issue before”. It’s almost like lyrics or the art trick them into thinking about a bigger issue! So, I’ve been really lucky, because of the content of my work, I’ve been able to work with a lot of charities and awareness campaigns. I get to do my two favourite things basically at the same time.

What does being a woman or Global womxnhood mean to you?

I’m very invested in the idea of global womxhood. I think all of us are quite myopic about our own experience and we tend to view the world through the filter by which we experience it.

I think one thing about having a mental illness, there are few benefits, but I think one good thing is empathetic imagination. Imagining how other people’s experiences are. I do believe that feminism will be intersectional, or it will be bullshit.

Increasingly, we need to counter this narrative that liberation is good enough for a woman who looks like me or has my experiences. If my trans-sisters, or women of colour or disabled women, or any of these different experiences of womanhood aren’t taken into account then it’s … its that Audre Lorde quote:

“I am not free while any woman is unfree, even when her shackles are very different from my own”.

The personal is political, our own stories are political and my story of reasonable privilege, including privilege of identity, mixed with experiences of very challenging mental health issues makes me want to do things. So I think that while my own experience of being a woman in isolation is a bit negative, when I look at this kind of broader landscape of people that we can work with and help and change their opinions then I feel empowered.

So, in terms of other women that you want highlight, is there a woman who either again inspired you or you feel like other people need to know about either as an artist or an activist?

Munroe Bergdof is really inspiring me at the moment. Someone who is a prominent public figure in the UK because she refuses to compromise. Her being dropped from the ChildLine campaign due to her status as a trans-woman really betrayed how people align trans identity explicitly with something sexual and damaging. I really respect her for raising the voices of trans-women, especially on the 50-year anniversary of Stonewall. We stand on the shoulders of Marsha P. Johnson and all these others amazing activists that have come before.

So, she’s really inspiring me at the moment but I’m continually inspired people, by The Vavengers, and by all the people here.

So, what is up next for you?

The other book is You Sad Feminist. I would love to come out with a new collection of poetry at some point but at the moment I’m just gigging around London. I’ve just released a single, poetry with music for a charity called CARAS, Community Action for Refugees and Asylum Seekers. They’re a charity in South London that do this amazing work on a community level, teaching English and other skills. The kind of things people need to adjust to living in the UK that our government has not provided. So, the single online is called Swallows and you can download it, all the money goes straight to charity. Apart from that I just plan to keep on working for charities and keep on using whatever platform I have to raise the voices of others.