In conversation with Eimear Ryan

She has the whole pool to herself.

She has seen the others off: the rugby players in for their

recovery swim, who splash around for twenty minutes and

then retire to the sauna; the slow, steady pensioners who

breaststroke endless laps. Beth counts them leaving, one by

one, as she sluices through the water, flipping tautly at each end.

It will never leave her, she thinks: the need to win.

Eimear Ryan is the Irish writer behind the brilliant new novel Holding Her Breath. It’s a coming of age campus novel, but not as you’ve seen it before. The book follows a young woman, Beth, whose first year at university is shadowed by both her potential as a professional swimmer and her family’s past. With a darkness inspired by the relationship of Ted Hughes and Sylvia Plath, the spectre of suicide hangs over the storyline, but in the end the strength of female relationships and the freedom of chosen family wins out. We spoke to Eimear about her characters and the world she created. 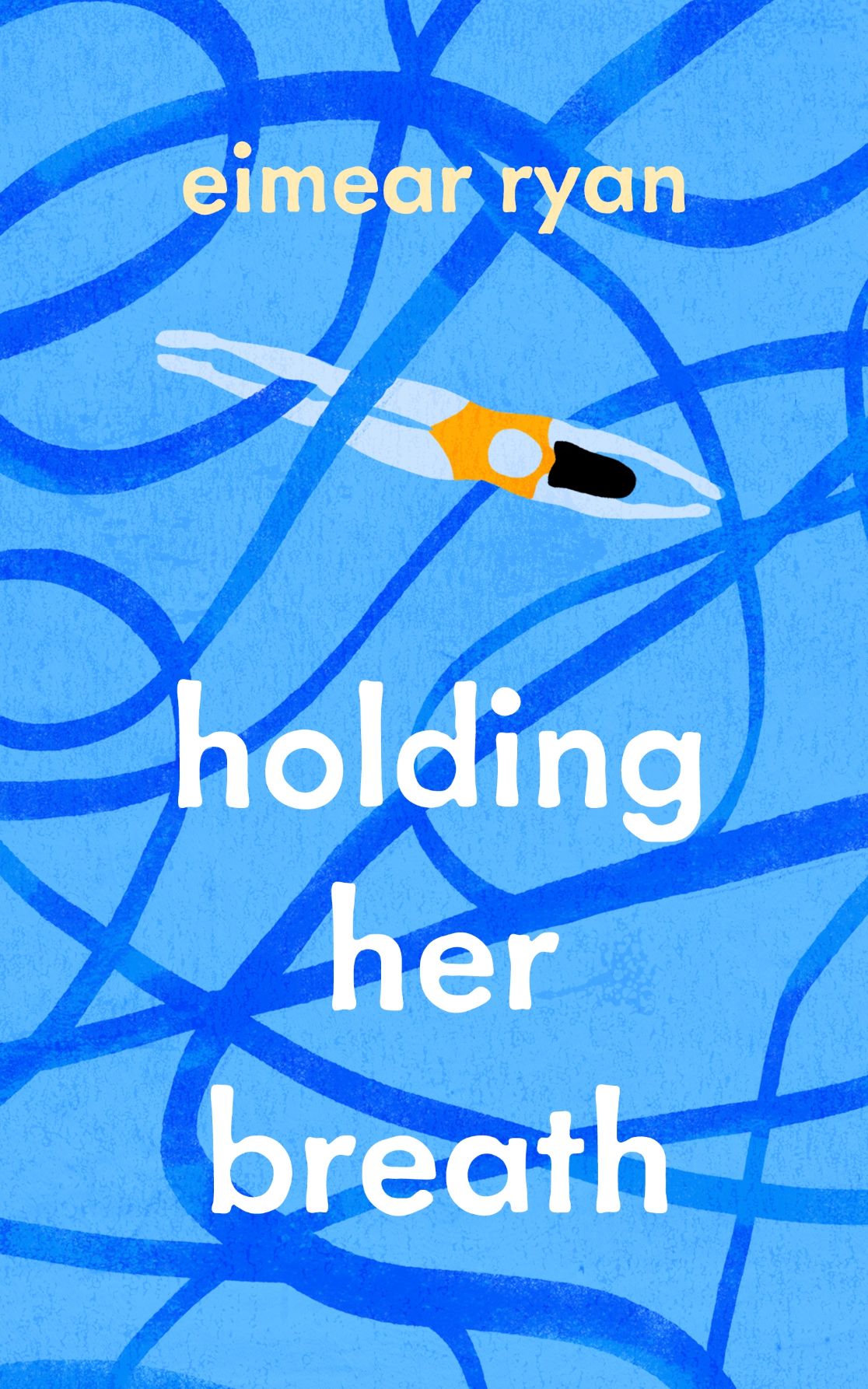 In your professional career, you have focused a lot on women in sport. How did this feed into Holding Her Breath and the focus on swimming?
In sports journalism, there’s still so much work to be done in terms of fair and equal representation of women, so maybe it’s not surprising that I chose to make Beth a swimmer – one of the few sports where women are given equal esteem. I’ve played team sports since I was a kid, and it’s only in recent years that I’ve realised what a profound effect it’s had on me as a person. As a young sportswoman, in particular, you navigate the world differently. You look at your body more through the lens of utility than beauty. I don’t think any young woman is immune to the many toxic messages about desirability, weight, and physical vulnerability that we receive from the world around us, but if you play sport you at least have a convincing counter-narrative to those messages. It was important to me that Beth was physically strong and capable, that she knew it, and was able to unapologetically take up space in the world.

How important was the idea of Beth reclaiming her body and her identity both through, and separate from, swimming?
I think that’s one of the novel’s core themes, that push-pull between Beth and her sport. Swimming has become highly compromised for her – by competition, failure, and external pressures – but the water is also where she feels most at ease, most herself. As the novel begins, she’s trying to re approach swimming after quitting suddenly the year before, but on her own terms this time. She’s also trying to figure out who she is outside of swimming. Because of her dedication to her sport, she’s missed out on a lot of teenage rites of passage such as figuring out her personal style, sexual likes and dislikes, and what it’s like to be in a relationship. She’s an experienced adult in exactly one arena – the pool – and her hunger for experience outside of that is what drives the novel.

Why was water as a theme so important to you? Beth is obviously a swimmer who finds solace in the pool, yet is haunted by the death of her grandfather by the sea?
Shortly before starting the novel, I went to adult swimming classes and finally learned how to swim – so water themes were very much to the forefront of my mind. Like Sadie, I grew up in the Irish midlands. Swimming and the sea didn’t factor into my life all that much (apart from a week in the summertime, maybe). It wasn’t until I was in my early twenties, when my commute brought me up and down the Dublin coast, that I became fascinated by the sea – and also by the people who had lived by the coast all their lives and couldn’t imagine any other existence. They were so at ease with the sea, but for me it was new and beautiful and a bit scary too. Beth’s relationship to the water is similarly ambivalent. Swimming laps is a meditative and calming practice for her, but she’s also suspicious of the sea, in part because her grandfather drowned in it. She much prefers the finite boundaries of the pool – at the start of the story, at least.

Female friendship and female relationships (with Sadie, Lydia and Beth’s mother) seem to be the relationships which are of greater importance than Beth’s secret one with the professor. Was it a deliberate move to make the fling a side story rather than the main plot?
That was a subtle shift that came about between drafts. Justin, the love interest, was more prominent in the early drafts, and Beth’s roommate Sadie was much more peripheral. Over time, I realised how much I loved writing Sadie, and she became more and more important. There were also a number of fights between Beth and Sadie in early drafts, and I realised that I was creating conflict for conflict’s sake, as if you couldn’t have two young women living in close proximity without fighting. It dawned on me that it would be much more radical and interesting if they never fought, if they both independently made the decision to stick by one another and be allies, despite how different they are. So I think Beth and Sadie end up becoming the real love story of the novel, as opposed to Beth and Justin, which feels right for the characters but also right for that time in your life.

How important is queerness to your novel, as queer relationships are revealed in the family’s history?
I associate queerness with freedom, finding new ways of being, and chosen family, and all of those are an important part of Beth’s journey. There are two generations of characters in the novel: Beth and her friends in the present day, and Beth’s grandparents and their friends in the 1980s. Both involve queer relationships, and both storylines are very much in conversation with each other throughout the book. Beth’s peers aren’t at all fazed by queerness, and while the older generation of characters accept themselves and their identities, they still have to live in a world (1980s Catholic Ireland) that is hostile to them, which leads to secrecy and tragedy. I wanted to contrast the prevailing social mores, but also to make the point that queerness is nothing new – it’s just much more possible to be visible now.

What or who is the inspiration for Lydia, such an important character in the book and in Beth’s life?
I’ve always loved writing old women. There’s a long line of truth-telling grandmothers in my short stories and Lydia is the latest iteration. Old women are underestimated, and so often the smartest (and most experienced) person in the room. They’ve also lived long enough that they’re able to shrug off some of their socialisation as women – they’re not especially bothered with people pleasing, nor do they really care what you think of them. The invisibility that comes with age can be depressing, or it can be freeing, and I think for Lydia it’s the latter. Each member of Beth’s family is dealing with the trauma from Benjamin’s death in a different way, and for Lydia it’s the difficulty of being the survivor associated with the departed tragic figure, and all the thankless work that is imposed on the one who lives.

In the book, the characters talk very openly about suicide, with a large amount of speculation and varying analysis. Does this detachment and speculation reflect any larger comment on the way you feel suicide is represented or talked about in society?
Yes – specifically how we romanticise suicide or early death in artists, that voyeurism that we as a society demonstrate when we draw a line from an artist’s work to their depression or addiction and finally to their tragic death. We’re very comfortable with the idea of tortured artists; it’s almost seen as part of the deal. I think as a society, we’re slowly getting better at talking about mental health and suicide, but when it comes to famous people the discourse can very quickly become ghoulish.

As a book so deeply focused on mental health, it’s interesting that we never find out the specific details about what caused Beth to take a hiatus from professional swimming. What shaped your decision to keep this from the reader?
I think it’s alluded to – there are enough clues that readers can piece it together. But Beth tells slightly different versions of the story to different audiences – her new friends, her lover, her teammates, and her therapist – which I think is realistic, too, for something she’s still actively processing herself. She is testing out narratives, trying to find a good enough story that she can live with and move on.