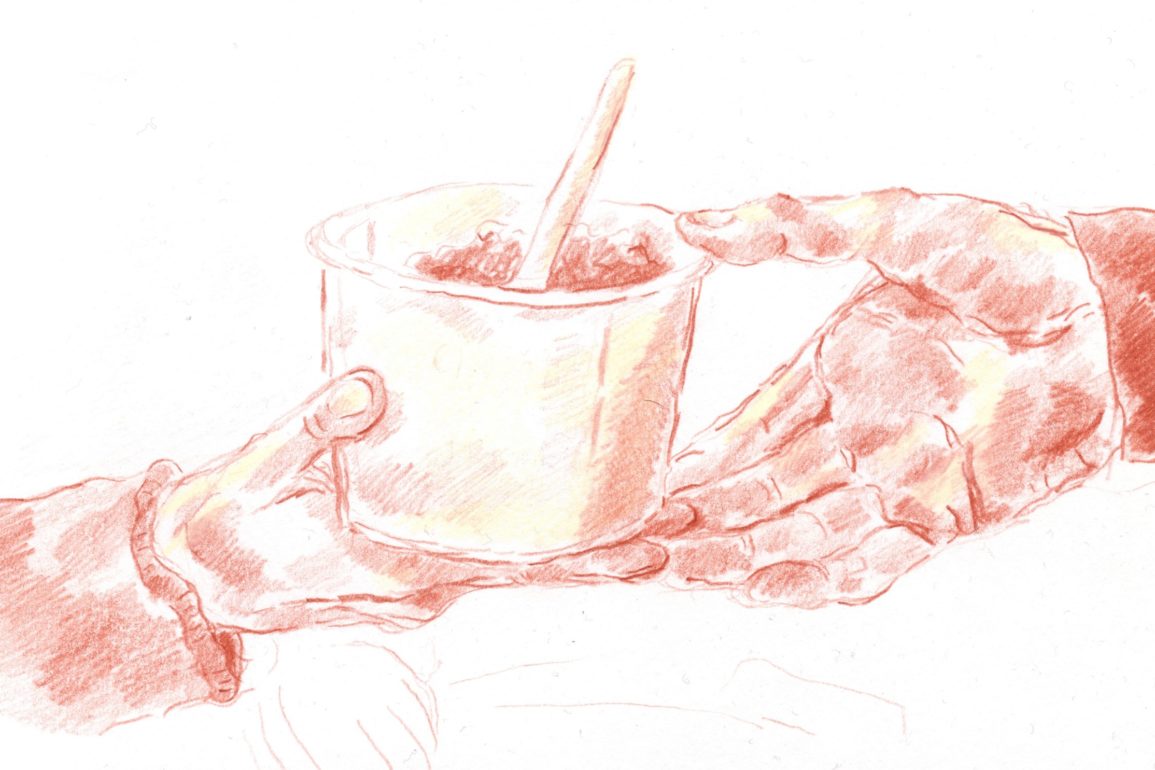 In conversation with Refugee Community Kitchen

shado: What is the story behind RCK?

RCK: RCK began in 2015, in Calais, serving food to refugees in what was the then known as the ‘Jungle.’ We’re still there, and have served almost 2.5 million meals since we started. I think the Calais crew have only missed one day since 2015. They’re an amazing bunch, and here in London we’re really following in their footsteps.
In 2017 RCK started serving food on the streets of London, to anyone who wants it, including the homeless population and other vulnerable people or people otherwise in need. The reasoning behind that was that, since the Calais operation had changed quite a bit after the Jungle was demolished that year, RCK ended up with a lot of volunteers who were in London, but who couldn’t make it out to Calais regularly. People with full-time jobs or family commitments. They’d also made a lot of connections in the city, and had resources of various kinds that were kind of ‘pooling’ in London, and couldn’t get out to Calais fast enough, so they thought: why don’t we meet a growing need in London?

Today, we run three nights a week in Camden, and two here in Hackney. We’ve also just met an independent group of volunteers who we are trying to help as they get up on their feet, and we’re part of a larger network of volunteers and charities across London – so in total we and our friends and allies are serving food 7 or 8 times a week around the city.

shado: Do you pick places to distribute based on need or convenience?

RCK: A bit of both, I suppose. It started in Camden because it’s a real hotspot for homelessness in London, but also as you say because the organisers were based in north London. Then it was the same with Hackney: the spot where they wanted to launch a new night was very close to where Olivia, my girlfriend and co-founder of the Hackney branch, and I were living at the time. So, it’s a little bit of meeting where there is a need, but also convenience. In a sense, you have to make this kind of volunteering easy for people, otherwise it doesn’t happen – so when there is a need to be fed, and homeless people to help locally, you may as well support the growth of this kind of project wherever you are, and wherever you can make it work. 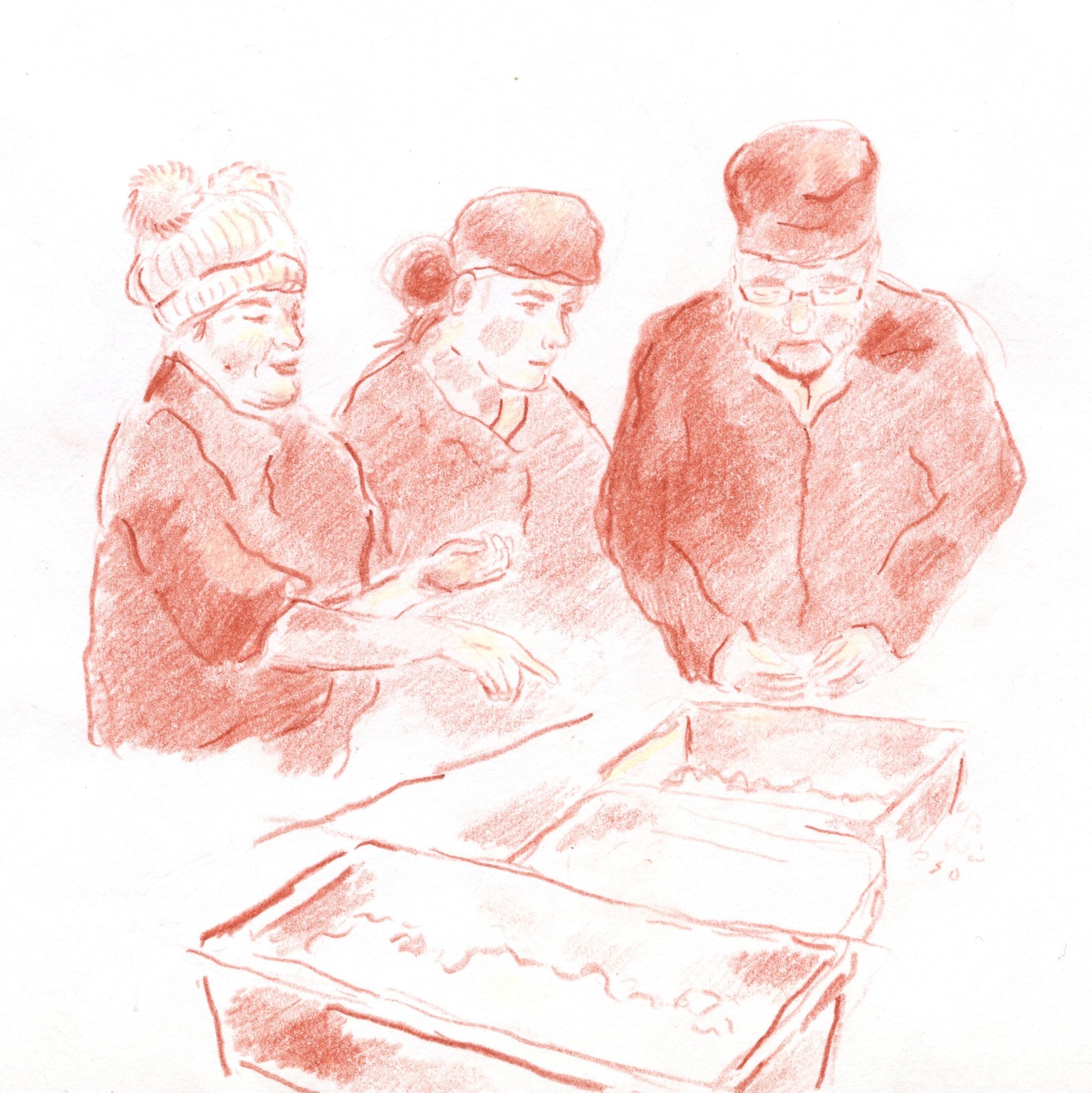 shado: What would you say are the main aims and missions for RCK and what principles does it stand for?

RCK: A phrase that we often use is ‘Solidarity, not Charity’. It means that organisations like RCK (as well as Streets Kitchen, StreetVet, and others in this little community of ours) are not very comfortable with the ‘top-down’ model of charities. We don’t like the idea that there is a big distinction between volunteers and the people that we work with. The idea behind ‘solidarity not charity’ is this:

there is a problem, and we want to stand with the people that are facing that problem.

A good example, and something I really like, is when people come to us and actually don’t really like the food we’re serving all that much. Often we’re serving vegan food, and some people can be a bit fussy. But when you’re homeless, you get very little opportunity to choose between different things, and you get even less opportunity to turn things down, or to tell people that they haven’t done right by you. And these are really important, human things, things we all get to do all the time! We exercise so much choice, and we all get to say, ‘No, I don’t like that, it’s not up to my standards’. Homeless people never get to say that. So, when people come to eat with us and they feel comfortable enough to say, ‘Nah, that food is shit, where are the sausages?’, I quite like that. They’re not just saying, ‘Ah, thank you so much for feeding us, we’re so desperate, and grateful’. When they turn down something we’ve got on offer, and choose something else, but they still come back the next week, and the week after, then it’s not desperation, it’s choice, and we know that they feel a little more at home.

This is an atmosphere that we try hard to cultivate at our outreaches. And that’s solidarity, not charity

our guests aren’t coming out of their way, onto our turf or into our spaces, to be given something – instead, we go out to where they are, to where they have to be every day, and stand with them for a little while.

shado: What are some of the biggest problems you’ve discovered from working on the ground here in London with refugees and homeless people? For you and for them.

RCK: For most of our guests, the problem is that there is no way back into the system: if you fall out of the system, there’s no re-entry point. Some of the people we work with are not only homeless, but they may not have the right to work, they may not have access to public funds, i.e. benefits or jobseekers’ allowance, they may be both homeless and have issues with their mental health… the list goes on. And all these different situations require complex, multi-layered responses and long-term assistance to bring people back into mainstream society. But no-one, no representative of the state, no government agency, has the resources or the remit to sit down with someone and understand thoroughly what their needs are, and then handle how those needs are to be met. Unfortunately, spending that time with people who really need it just doesn’t seem to be a priority at a national government level. With local councils, the situation is slightly different: most are staffed by people who are close enough to the streets to see the pain that other people are suffering there, but they just don’t have the resources to respond effectively. In real terms, most councils are working with about half the annual budget they had ten years ago. Half! So it’s no surprise we’re seeing a resurgence in homelessness.

I don’t know whether there is a ‘biggest problem’ in terms of our project. Functionally, it all works very smoothly, because what we do is quite small; it’s very managed, and we don’t overreach beyond what we know we can deliver. We got up to two nights a week and were happy with that. We’re going to look at if we can make it up to three in 2019. We serve probably 100 people on a busy week, 50 or 60 on a quiet week. One of the hardest things for us is that we can’t direct people anywhere, if they have complex needs. We have to make our peace with the fact that when people come to us with a problem, more often than not there is no way we can help them, beyond giving them a sympathetic ear, a smile, and some hot food. We have to remember that we are amateurs, ultimately, and we are in no position to give some advice to people. For example, we meet a lot of people who are, by any measure, suffering from depression. Life on the streets is, no doubt, fucking depressing. The immediate urge is to do something to try to help them, to make them feel better, but we have to remember that we are not qualified to meet that need, and there is a risk that we will do more harm than good if we try to. That can be hard, and there’s a really enduring sense of frustration that comes from that. 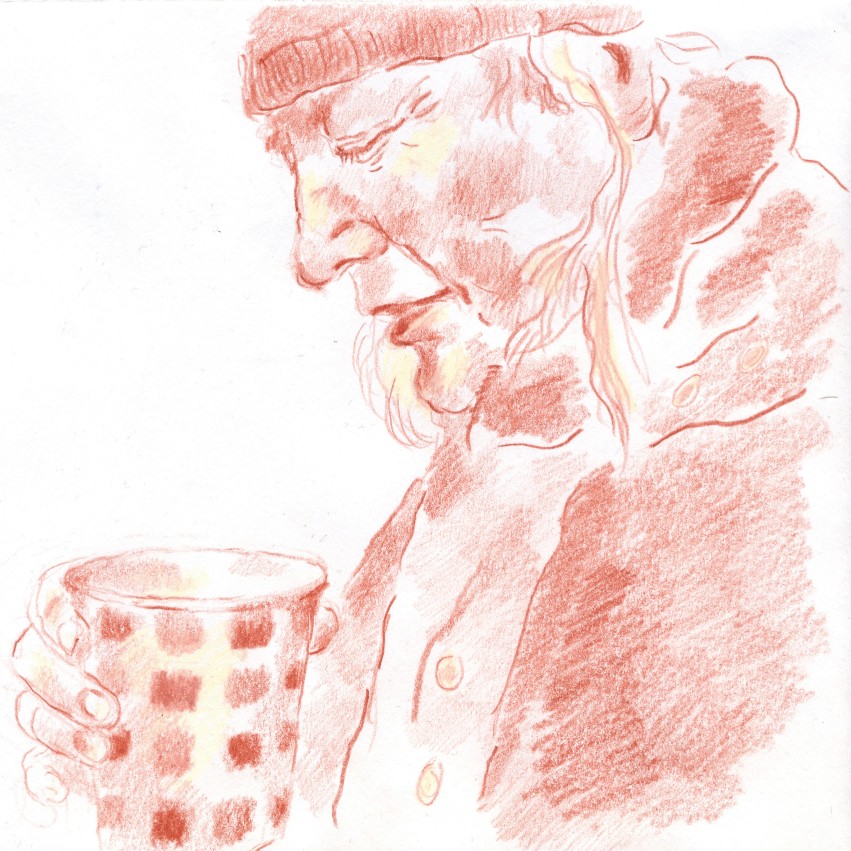 shado: What are some of the biggest misconceptions you feel people have about the current homelessness situation in London?

RCK: It is important to remember there’s been a homelessness crisis before, in the UK, and we had it fixed. Speak to veterans of homelessness outreach organisations, shelters, crisis centres, and they’ll tell you: ten years ago, they had this problem fixed. Not to say that there were no homeless people, but a fraction of the numbers we see today. The thing that upsets me the most today, and what makes me really worried, honestly, is that we begin to simplify the problem. We begin to say things like ‘should I give money to homeless people?’ or ‘won’t they just spend it on drugs?’ or ‘why can’t they find a job?’, without thinking about what it means for you, as a human being, to try to help out another human being who is right there, in front of you and in desperate need.

I worry that we’re all learning how to not look at homeless people.

You come out of a train station and you hear someone asking you for something, and by the time they’ve even gotten halfway through saying ‘spare some change?’, you’ve already said ‘Sorry, I’ve nothing on me’, and you’ve walked on and you haven’t even looked around. You hear it in their voices and in your own voice, that the whole transaction, the whole routine, is becoming automated. And to me that’s really shocking, and kind of terrifying.

There’s something so dehumanizing not just in being homeless, but in the whole set-up, the whole social dynamic around it

It says to me that as a group, we’re no good at empathy, at seeing sadness and grief and need in the world and responding to it with kindness and trust and generosity. And every time that interaction happens, we get worse at it. We get a little bit more comfortable with ignoring other people’s desperation. This is real emotional damage we’re all doing to ourselves, in just automating that response, and turning it into a routine. I don’t know if that’s a misconception, but it’s something I think about a lot, and I think it’s our biggest battle right now. 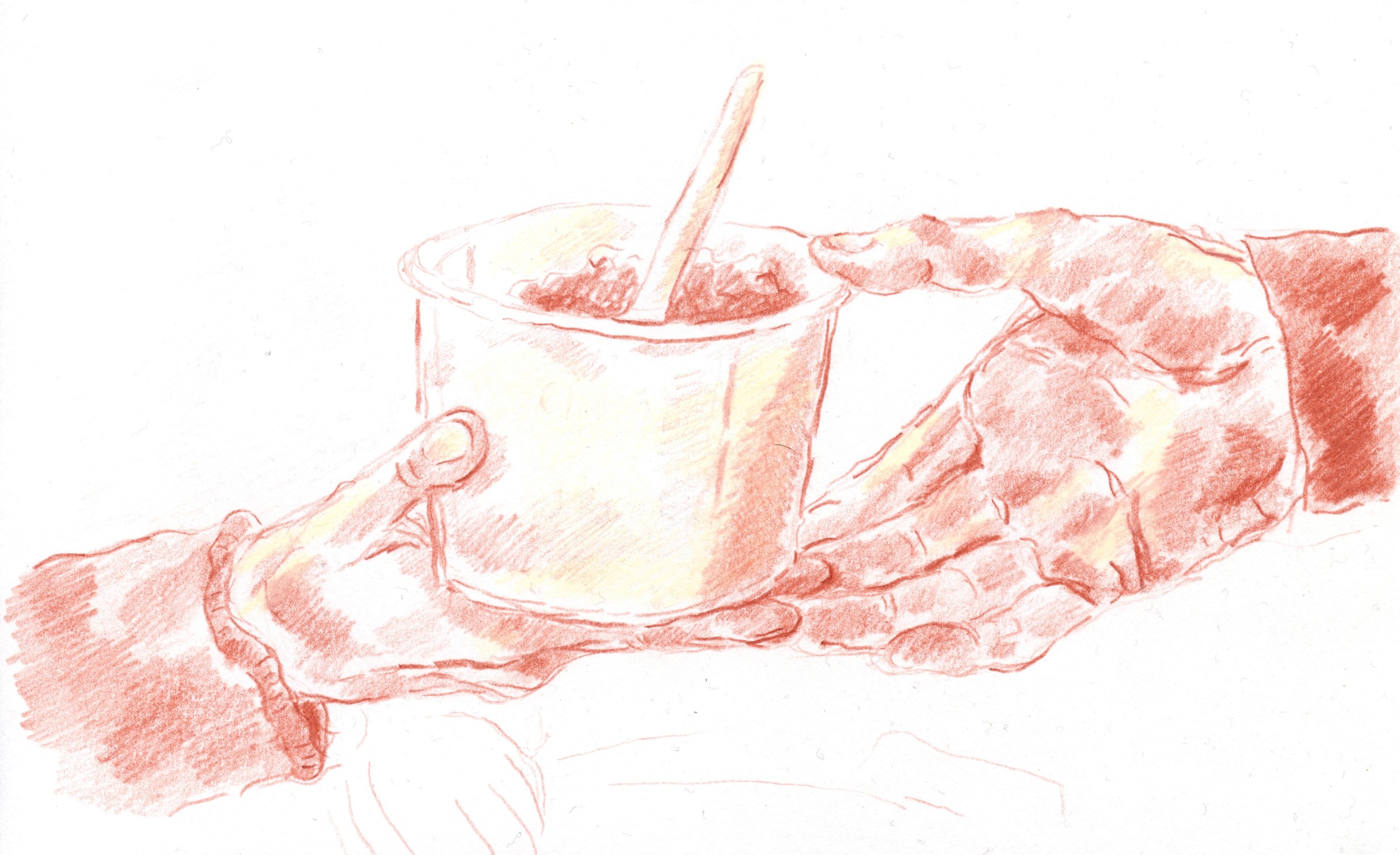 shado: How can people who are wanting to help get involved?

RCK: A good thing to do would be to come and volunteer with us! Email me on rckhackney@gmail.com, or the Camden branch on rckoutreach@gmail.com. But a better thing to do is to start one of these yourself! Tell us where you live, tell us that you want to start doing this yourselves, that you’ve got some volunteers to do it with, show us that you’re serious, and we will help you to get set up with the right equipment and resources and food, we will send you volunteers, we will give you advice… we’ll even send you guests! Set up an outreach yourself. You need ten people, once a week, to all muck in a bit. Nobody has to do too much. And it is so rewarding, to build something like this, a small group that is doing a little good, feeding people, meeting them with a smile, repairing some of that emotional damage, in a place where it wasn’t being done before. So do come and volunteer with us if you like, but I would much rather you set up your own – if we did it, so can you!