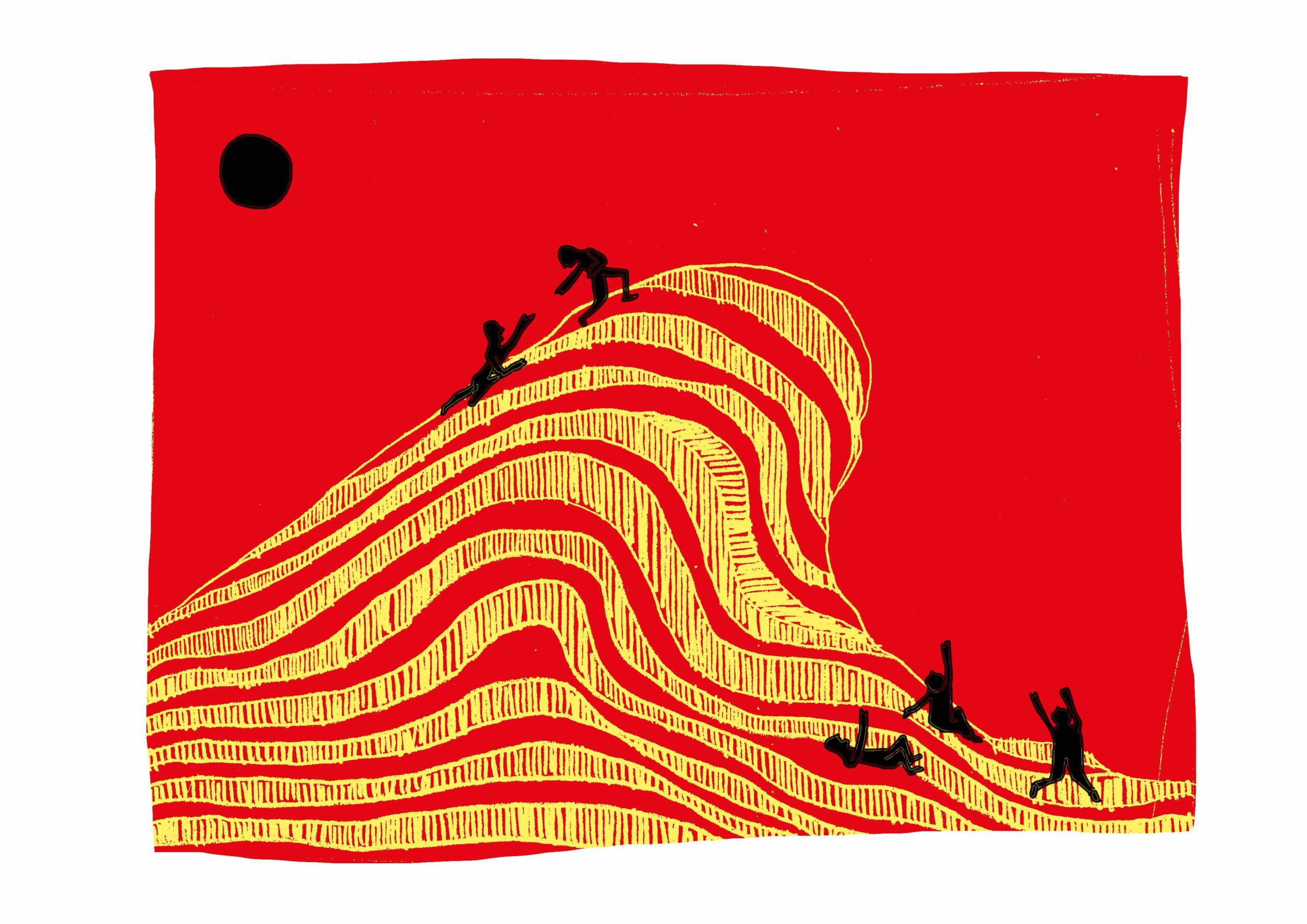 Sexualised identities and international solidarity – something fictionalised and something made real

In April 2019, the Sultan of Brunei, Hassan Al-Bolkiah, implemented laws that punish same-sex practice, adultery and rape by death through stoning. These laws, allegedly based on Sharia law and thus framed as guidance by God, are an extension of dangerous and horrifying realities for LGBTQI-members living in Brunei. They provoked international crticism so that, as a result, Al-Bolkiah decided to extend a moratorium on them which suspends the death penalty temporarily. This seemingly speaks to the success of international solidarity campaigns. However, a closer look at this kind of solidarity opens questions about the usefulness of international outrage when it is not sufficiently informed about foreign political and societal dynamics. There had already been a moratorium on the death penalty before, which was ironically temporarily suspended in April. Thus, while not having worsened, the situation of LGBTQI-members in Brunei also has not improved.

The limited success of the Brunei campaigns calls into question the efficacy of non-indigenous international campaigns.

As a continuation of the discussions we have during Pride Month, it is worth re-thinking the limitations and possibilities of allyship and solidarity. Specifically, when these are based on identity politics, we need to understand sexualised, gendered and racialised identities in their particular historical, geopolitical and cultural contexts in order to create meaningful solidarity. Engaging with them as outsiders can be more harmful than beneficial. If we want to avoid essentialising, even re-colonising, non-western identities,

we need to create more space for lived experiences, rather than silencing them with our short-lived human rights campaigns.

The academic work of queer theorist Jasbir K. Puar is useful for understanding the framework in which we are to ground our work towards international solidarity. Her concept of “imaginative geographies”, namely the idea of divides along global north/south and west/east lines, including all the presuppositions and stereotypes that define our imagery of these places, delineates the notion of “something fictionalised and something made real” (2006: 68). This means that even though we know that these places, as we understand them, have been artificially constructed through academia, cultural and historical re-production, politics, and borders, they nonetheless have become ‘real’. For example, Europeans, Americans, North Africans, and West Asians call the Middle East the Middle East even though it is only east in regard to Europe’s geographical location.

Similarly, sexual and gender identities are both fictionalised and made real. Their intricacies can be best explored through dialogue with non-heteronormative people in different societies. In an interview, Zafar, a self-identifying gay Muslim man of South Asian descent, discusses non-western perspectives on international LGBTQI-solidarity campaigns. Having lived in the west for most of his life and researching non-western non-heteronormative sexual identities and how they translate into different contexts, he warns of the risks and paradoxes that uninformed action can pose. Despite using ‘gayness’ as an identity marker, he vehemently distances himself from the western understanding of queerness, as well as from the idea of a universal gay community. Instead, Zafar explains that “terms like gay/lesbian/homosexual/heterosexual are very modern, western terms, which does not invalidate them at all. But the use of these terms indicating an identity is very new and limited”. Limited, because as a South Asian, he “cannot fit in with the white western gay narrative and labels”. He also acknowledges that there are many same-sex practitioners who do not identify with these terms. Thus, “sexualities are not as clear cut as we think of them in the west and conceptions of sexuality are very different across the world”.

Realising this, being an ally to someone who does not identify with how western societies frame non-heteronormativity becomes a complex project. Zafar’s caution not to speak for others is mirrored by feminist historian Afsaneh Najmabadi’s work which shows how understandings of sexuality and gender vary in different contexts and enquires about what happens when these concepts travel (Ibid 2006). She warns us not to ahistoricise or atemporalise categories of gender and sexuality, meaning that we should not assume that these concepts and identities evolve the same way everywhere. How, then, do we engage in these debates abroad?

Columbia politics professor Joseph Massad calls western queer organisations who advocate for gay and lesbian rights globally the “Gay International” (2002: 364). He problematises the common western assumption that ‘oriental’ “desires, which exist […] in ‘oppressive—and in some cases murderous—homelands,’ be re-oriented to and subjected by the ‘more enlightened’ Occident” (Ibid: 364). Can a set of perceived rights and freedoms possibly be exported when, as we know from Zafar, they are in fact not effectively implemented in their countries of origin? During the interview, it becomes clear that there is a severe lack of space for minority groups in western queer spaces, so why are western queer organisations so interested in ‘saving’ non-western LGBTQ-communities? Asking these questions leads us to uncomfortable conversations about western saviourism and enduring neo-Orientalist reproduction of knowledge which serves to create a progressive ‘Us’ and a backward ‘Other’.

Zafar offers lived experience to academic debates on queer theory. When working in the Middle East, he felt “a lot more comfortable, because men are a lot more affectionate there than in the west” for the reason that intimate homo-sociality between ‘eastern’ men is more accepted than in Europe. In contrast to the liberalist theory of the Gay International, that believes in a universal desire to ‘live one’s truth’, he feels at ease in the ‘not yet liberated’ conditions of the Middle East. Namely, not being openly gay identifying, but nonetheless practicing same-sex activity and openly expressing affection for other men. Therefore, western liberatory ideas do not necessarily translate into freedom for someone in a non-western context. Moreover, they do not ‘liberate’ people like Zafar in their supposedly own queer spaces as long as they fail to accommodate non-white/non-Christian identities. He feels strongly about the fact that openly identifying as being gay and “coming out, is a very privileged thing to do. There are a lot of people who live their lives not needing to tell anyone and I don’t think there’s anything wrong with that. Especially if it’s preserving your safety”.

Massad’s and Najmabadi’s problematisations of a transhistorical understanding of sexual categories echo Zafar’s acknowledgement that same-sex practice does not always translate into a homosexual identity. He stresses that “it’s very easy for someone in the west to say how much harder it is elsewhere, but you find people living their lives in other countries, they still have their ways of being okay with it”. In other words: it is no one’s place to presuppose oppression. This directly criticises the Gay International’s campaign to liberate other seemingly more oppressed LGBTQ-communities in imagined geographies loaded with orientalist assumptions, especially about (Muslim) sexuality.

Furthermore, Zafar is aware of the dangers that inciting discourse, i.e. forcibly starting unwarranted, poorly informed conversations, can unleash. For example, many Bruneian LGBTQ-members initially warned that an international boycott against the Bruneian economy might backfire against their community, because most Bruneinans would not consider it a protest against their government and rather feel personally attacked. This might lead them to turn against LGBTQ-members (read more here). However, human rights activists and organisations nonetheless proceeded to boycott Bruneian hotels in an attempt to show their dissent against homophobic discrimination. We again return to the question of how to help and listen, rather than act how we deem most appropriate.

In the context of globalisation, intense migration and widely accessible internet, identities and individuals need to be understood in their multiplicity, recognising that identities are intrinsically nuanced even within the same specific contexts. Sexualised identities are complex and the fact that we cannot ‘map out’ where homosexuality persists as an identity marker and where same-sex practice remains a sexual activity means that we need to work with it as something fictionalised and something made real. In Zafar’s case, the internet and specifically videos of white homosexuals strongly influenced him as “for a long time when [he] was growing up there was an absolute scarcity of role models to look up to for advice and guidance when it came to issues of masculinity or sexuality”. This, paired with other cultural aspects, such as societal pressure for marriage with a woman, inform his internal debates about ‘coming out’ and visibly identifying as gay, not least in order to pave an easier path for others in his community. Still, he has a strong desire to place himself in a non-western framework that might not use the word ‘homosexual’ and yet discusses concepts that he relates to as a self-identifying gay man. His nuanced identity interestingly hovers between something fictionalised, (i.e. a brown Muslim homosexual identity), and something made real, (identifying as gay).

The geopolitical, cultural and racially gendered aspects of international politics and history, now made real, play into the complexity and variability of identities. Therefore, whenever we position ourselves, we must do so through an informed, open-minded approach that involves listening, re-imagining and fact-checking. If we want to do better than all the other times we were allies for a short-lived minute, we need to confront our own biases first. Can we show solidarity without projecting our own preconceptions onto individuals in societies at home and abroad?

In the case of Brunei, it will be interesting to follow the commitment and longevity of this seemingly successful international outcry. While the moratorium means that the death penalty will not be exercised for now, it can be reversed at any given point, which leaves non-heteronormative people in a constant state of fear and insecurity. Matthew Woolfe, founder of the human rights group ‘The Brunei Project’, reminds us that as long as laws to punish people are still in place, LGBTQI-members are not safe. Will the Gay International focus remain on Brunei long enough to build meaningful and lasting support or will the premature celebration by western activists prevent possibilities for genuine solidarity, leaving Brunei behind in order to attend to their next ‘humanitarian emergency’?

Molly Ann Pendlebury is a British illustrator, sound and moving image maker based in London. Her work draws from daily observations of people and characters, topical issues relating to societal norms and expectations, politics and sexuality. Not circumscribing to a particular medium, she enjoys exploring outcomes in a variety of forms; from print and collage to video and sound.