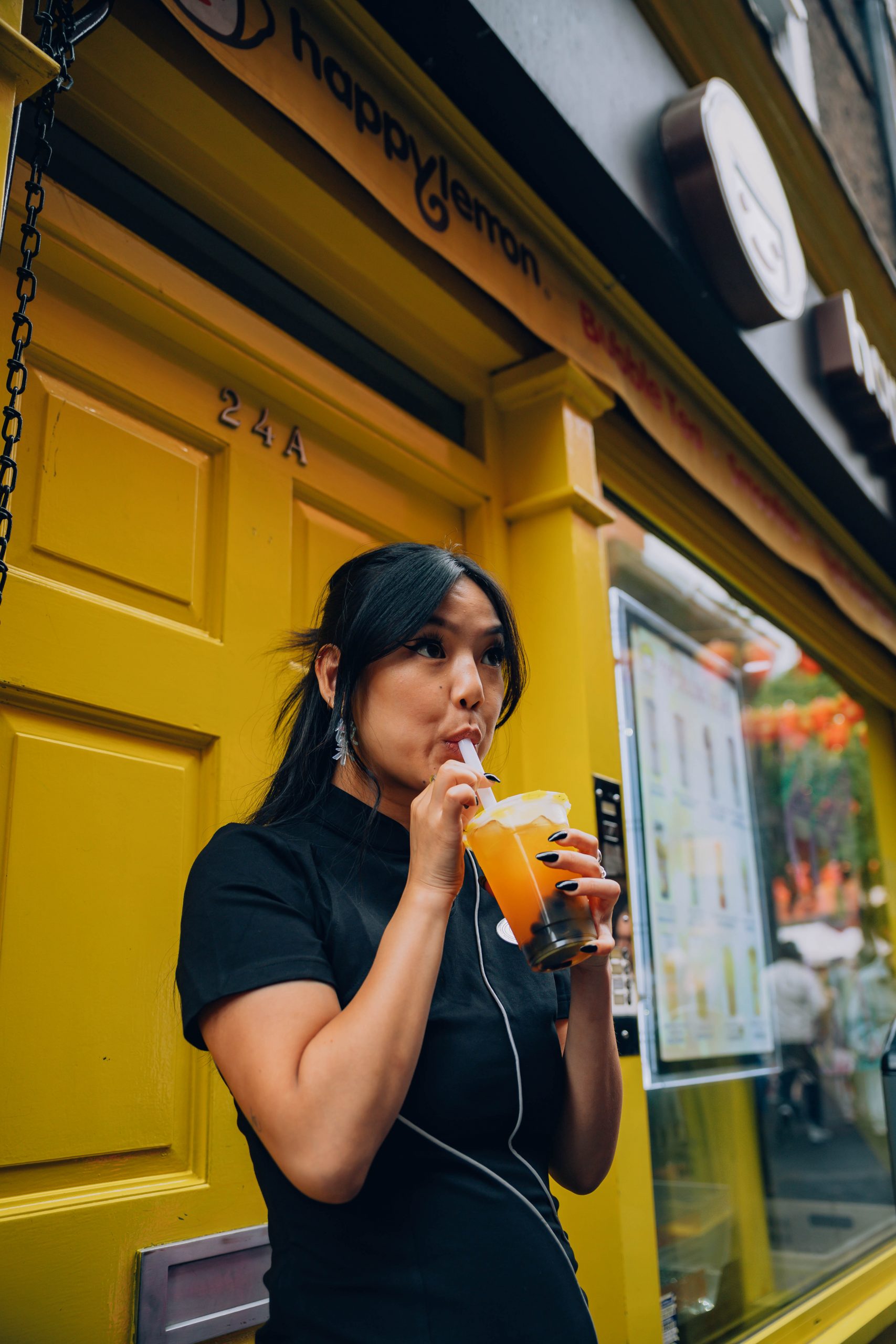 In conversation with Angela Hui about resilience, intergenerational trauma and growing up in a takeaway in rural Wales

It’s the hottest day of the year on British record – with temperatures reaching 40 degrees – when I speak to Angela Hui, author of Takeaway. She’s just got back home from running errands ahead of her imminent book launch, and she seems a little flustered as we talk about the scorching heat outside. I immediately think of the sweltering kitchen of her parents’ Chinese takeaway in rural Wales, which she summons in wonderfully descriptive detail throughout the memoir.

Living in the environment of a Chinese takeaway is not an easy ride. Sure, any commercial kitchen is a hectic, sweaty place to be – but add in the struggles of running an independent, migrant business, often in rural, mostly white areas where racism and shopfront vandalism are common, and it’s no wonder that the “takeaway kids” (people who grew up working in their parents’ takeaway businesses) are some of the most resilient people I know.

Having just returned from a work trip to the US, where I spent my free time meandering around downtown Boston, Manhattan’s Mott Street and Flushing in Queens, all three Chinese and other ESEA American strongholds, I find myself reflecting on the future of these communities.

Better pens than mine have written about the gentrification and pressures facing family-run Chinese businesses in the US and UK – including Angela herself – and it seems that the decline of the independent (97% of Chinese businesses are independent, according to food and drinks industry research consultants, CGA), family-run Chinese takeaway is inevitable. That’s not necessarily a bad thing, according to Angela who believes: “While it’s sad that many takeaways are declining, it just shows a mixture of changing tastes and trends and migration patterns.”

As much as the driving force behind the decline is digital – many traditional, ESEA-owned businesses are still cash only, and you wonder how long they’ll be able to last in the age of contactless payments – there’s also a generational factor. “Not many parents want to pass that gauntlet onto the next generation because it’s so hard working on your feet for 14-20 hours a day,” explains Angela, whose parents emigrated from Hong Kong and China in order to provide better opportunities for her and her two brothers. The point is, her parents didn’t necessarily envisage the takeaway life for their children. As Angela muses to me towards the end of our interview: “my parents came to cook, so we didn’t have to.”

So, if traditional takeaways are set to fade from an increasingly gentrified UK culinary landscape, do we just accept it, and mourn them as we sip on our £7 bubble tea? Not exactly.

Angela has been safeguarding the heritage of Chinese takeaways for a while now, determined to engrave them firmly into the annals of modern British history. In addition to penning Takeaway, she has been busy paying cultural homage to the takeaway in other ways.

In “Taking Care of Business”, an immersive exhibition at London’s Migration Museum designed to shine a light on Britain’s migrant entrepreneurs, Angela recreated – in impressive detail – her parents’ Chinese takeaway, from the enormous counter to the original sign from the shopfront. The installation, which is open until March 2023, also features audio snippets from other takeaway kids, showcased, in a genius move, via the landline phone that replicates the one used to take orders.

The drive to be at the forefront of initiatives like this, Angela explains, came really naturally, despite the wariness of being typecast as the Chinese journalist who writes about Chinese things. “It’s a delicate balance,” she admits, “because I do write about other things too, but it’s interesting that something I rejected for so long has now become so part of my identity and my work now.”

Takeaway is a book that is funny and extremely moving in equal measure, not least because of the courage it must have taken to address some of the more difficult experiences, such as enduring racism, the very real struggles of poor mental health and intergenerational trauma among many migrant families, and her father’s difficult relationship with gambling, as well as its damaging impact on the family.

I’ve said to several people that reading it is like sitting down with Angela for a pint and listening to her life story, told through tones that are softly and gorgeously Welsh (if you listen to the audiobook, you’ll see what I mean).

It seems, though, that the documentation process has been a healing process too. Coming to terms with her family’s histories, and through interviewing and collaborating with her parents to reproduce the recipes that are as critical a part of the book as the memoir itself, Angela tells me that writing the book provided a needed catharsis.

And, of course, this is as much a book about Wales as it is about family. Through the eyes of Ah Mui (a family nickname for Angela which means “young girl” in Cantonese and features heavily in Takeaway), we learn about life in the Valleys, her relationship with her brothers (“the best colleagues I’ve ever had”) and about some of the absolute characters who came to know and love the takeaway. We also learn about Angela’s own feelings of Welshness, which morphed, over the years, from a desire to get as far away from her hometown of Beddau as possible, into something fiercely proud.

“Wales is a proud country,” Angela explains. “Our own language is compulsory learning – our identity is an obligation from quite early on. But moving to London has made me even more proud and honoured to be Welsh.”

“There weren’t a lot of opportunities where I came from,” she continues. “I grew up playing on the old cokeworks round the back of the takeaway, a constant reminder of the mines closed under Thatcherism. I’m Welsh first and foremost, because it’s made me who I am.”

Recording the audiobook for Takeaway made Angela realise just how much she missed her home – having to emulate the strong Valleys accents made her reach for a particular word in Welsh: “Hiraeth”. It has no direct English translation. It’s a longing, tinged with grief and nostalgia, and one that makes Angela want to be back on the right side of the Severn Bridge.

So what’s next? Angela isn’t sure, but she’s going to be there to document it. “It could go either way,” she admits, when we talk about the future of British Chinese food. “Now there’s so much more choice, more competition, more delivery options.”

And, as it did in the 1950s, once again, British Chinese food will follow migration patterns and routes, be it through the shiny new London restaurants offering modern ESEA dining that’s a little less considerate of the traditional, white British palate (according to the CGA, the UK is now showing much more of an appetite for ‘bold, spicy flavours’), or whether it’s – wait for it – a British Chinese restaurant in Hong Kong showcasing the delights of crispy aromatic duck, prawn toast and chips with curry sauce.

These establishments may not be traditional takeaways, but they’ll be a continued evolution, in the ever changing landscape of British Chinese cuisine and identity.

Our interview flies by, and the time seems as blurred as the appallingly indistinct photos that Angela is somewhat infamous for posting on her Instagram page. Angela is anxious about her book launch, although she’s already been stunned at how many non-Chinese readers have told her how much the experience resonated with them.

A self professed gaming nerd, lover of nail art and, of course, cooking, she’s also looking forward to unwinding with friends and loved ones, who provide her with a constant source of resilience and inspiration. And so, you see, this isn’t just a book for Angela. It’s a book for all of us who grew up in marginalised communities. It’s a book that says, ‘We’re here.’

Buy a copy of Takeaway HERE