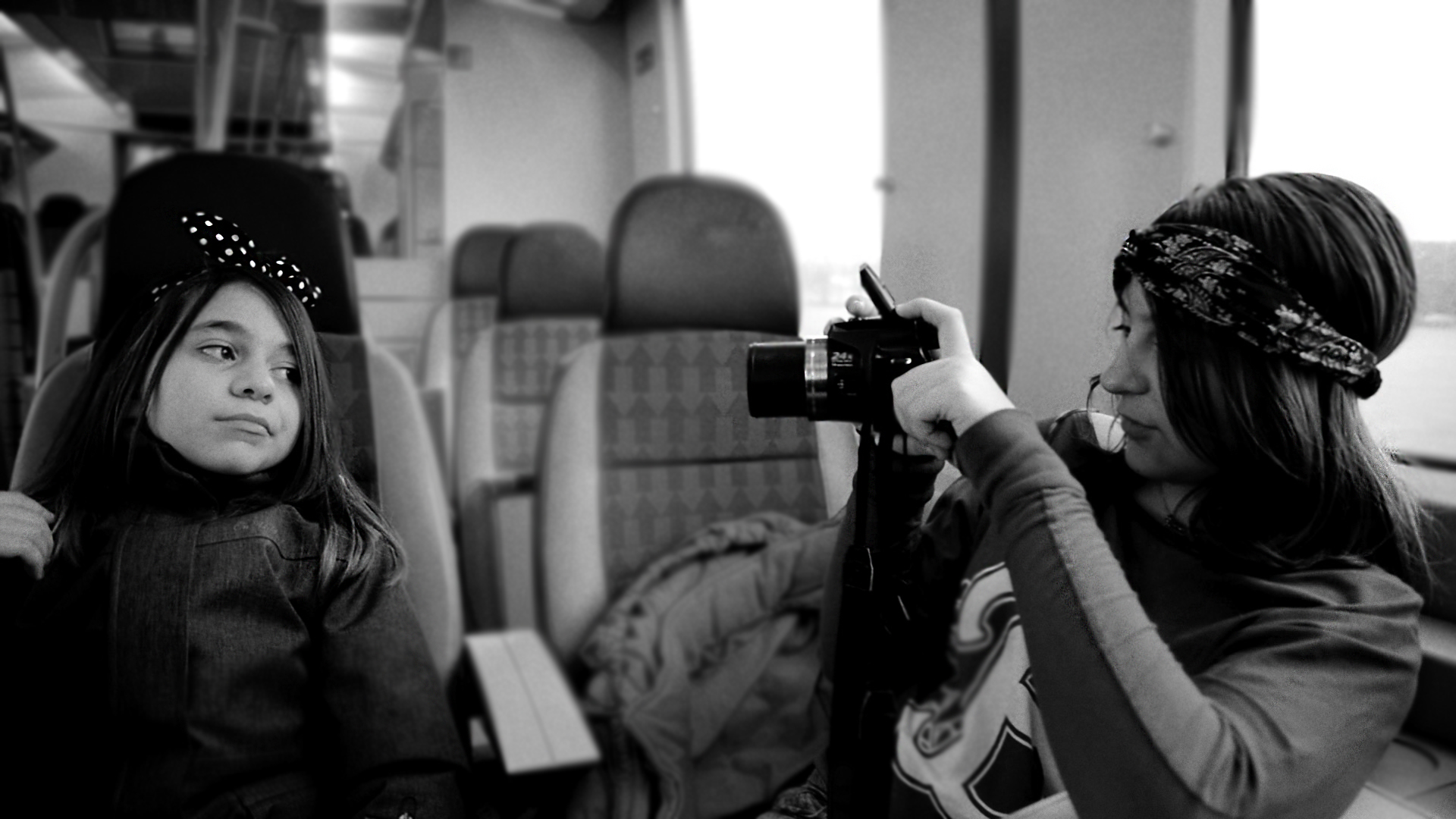 In conversation with filmmaker Laura Wadha

Ahead of our evening of short films in collaboration with The People’s Film Club on 9th May, shado spoke to Scottish-Syrian documentary filmmaker Laura Wadha. Laura is currently finishing her Masters in Directing Documentary at the National Film and Television School. We spoke to Laura about her aims and motivations as a filmmaker and specifically about her film Flight, which she will be showing at the event on Thursday. A few tickets are still available here.

Flight follows the journey of Laura’s two young cousins, Mera and Maria, who arrive in Sweden having fled the war in Syria. The film follows the sisters and their navigation of a journey to a new world, in which they try to hold on to the fond memories of their once beautiful home while struggling to deal with the repercussions of growing up surrounded by war.

How long have you been making films and what made you want to start?

My interest in making films started when I was quite young, I was 14 when I made my first film – it wasn’t very good, but you have to start somewhere! I think I was drawn to making films because I loved watching them. I have a very overactive imagination and have always wanted to write and create my own world. I always felt that filmmaking was the best way to do that.

Can you tell us a bit more about Flight?

Flight is a personal documentary about my young cousins who made the journey from Syria to Sweden in 2015. The film follows their lives over a period of four years and explores their experience of the war, really focusing on their perspective as children.

What were your main motivations for making the film?

I had just finished making my first short documentary about my Scottish grandfather and was talking with him about what I was going to do next – he said; “You should use your filmmaking to help people”. That really stuck with me and is still one of the main things that motivates me. He said I should try to make a film about my cousins in Syria, but I didn’t think it was possible because I couldn’t go there. I started by recording phone calls and Skype interviews with my family and looking out all our old home video archive from our holidays in Syria. That’s where the process of making the film really began.

What do you hope audiences will gain from watching Flight? What responses did you get from your cousins and aunt?

There have been so many films made about the situation in Syria and a lot of media coverage. One of the main things I hoped people would get from my film is a personal perspective – an insight into how my family have been affected. I remember reading somewhere that sympathy puts people at a distance. Very often, with situations like this which are far away and so unrelated to us, we watch the news and sympathise with who we are seeing on the screen. I wanted to make a film which would create empathy and bring people closer. So, I hope that when people watch the film they feel immersed and leave with a better understanding of what people in Syria have gone through.

My cousins and aunt were very involved in the making of the film from the beginning. I gave them a small camera to use and they used mobile phones to film their journey from Syria to Sweden. I wanted it to feel collaborative and from their perspective. I think because of that they enjoyed seeing the film when it was finished – but they did find it really emotional.

The theme of identity is hugely important in Flight, especially in relation to the changing nature of this for your cousins (i.e. Syrian versus Swedish). A particularly emotive part of the film’s narrative is when they seem to want to reject their heritage and identify as more European. Has their sense of identity evolved since the making of the film, and in what way?

I think their sense of identity will continue to evolve and change as they grow up. I’m sure they will go through different phases and will sometimes feel more Syrian than Swedish and vice versa. Towards the end of the film they were going through a period of time where they were rejecting their Syrian identity as a way of fitting in and becoming more ‘Swedish’. However, now, they are speaking Arabic as well as Swedish and have started to embrace the fact they are Syrian a bit more. The issue of identity is very complex for most people, and I think in the case of Syrian refugees this complexity is heightened. For my cousins specifically, they are in a sort of limbo. They are moving forward and trying to fit into a new world while still holding on to be Syrian.

Does identity remain a key theme for your upcoming films?

Themes of identity and trauma are both quite important to me and most of the films I make and have made since Flight have remained quite focussed on that. At the moment I am working on a short documentary about a Syrian family living on the Isle of Bute in Scotland.

I think a lot people have unexplored trauma and issues with their identity, varying from person to person. It is definitely extreme in the case of Syrian refugees. The combination of a traumatic event combined with entering a new world is particularly challenging, it leaves people wondering who they are and where they really belong.

When I was younger people would often remark on my surname and ask where it came from. When I said ‘Syria’ no one knew where it was and showed little or no interest in it. Now, when I tell people I am half Syrian, I am instantly met with a series of questions about the war. A lot of my Syrian family are now refugees, scattered around the world in Syria, Abu Dhabi, the UK, Sweden, Texas and Canada.

When I visited Bute, I felt as if I was watching the two sides of myself meet. Seeing the interactions between the Syrians and Scots was compelling and

I think there is something powerful to be explored in the merging of identities.

Why do you think film is such a powerful medium through which to explore the theme of identity?

I think documentaries are really important and there is endless scope to explore themes like identity on a metaphysical level. Identity is unique to each person so it’s maybe hard to understand someone else’s view of themselves and others. I think in film we can explore these feelings in a way that creates real empathy in the viewer.

What do you believe are some of the biggest misrepresentations around migration at the moment, and what do you hope Flight adds to this narrative?

I think there is a misconception that Syrians wanted to come to Europe for reasons other than the war in their country. Syria is such a beautiful place and my family have been asked questions like ‘do they have roads in Syria and houses?’

I think the media has a huge part to play in how we perceive countries in the Middle East. For example, Iraq was the centre of medicine and education. Baghdad was breathtakingly beautiful yet our main impression of it has come from the images we saw on the news.

When I was making Flight, I was conscious of this and wanted to use our old holiday videos to show what Syria was like before the war. I believe it is so important to know how special a place it was in order to understand what has been lost.

At the moment, my focus is on documentary making, I am currently in my final year at the National Film and Television School where I have been doing an MA in Directing Documentary. I think the lines between fiction and documentary are becoming more and more blurred though and there have been a lot of great hybrid films which I think could be interesting to explore.

Who should we be watching at the moment – have you got any specific filmmakers who have influenced you?

The documentaries that have recently inspired me are ‘Black Sheep’ by Ed Perkins and ‘Little Pyongyang’ by Roxy Rezvany. I liked how they explored really important themes of identity and loss/trauma in such a creative and emotive way. I was also really impacted by Orlando von Einsiedel’s feature doc ‘Evelyn’. It is a beautiful film and deals with a very personal story of grief in a way that is relatable to everyone.