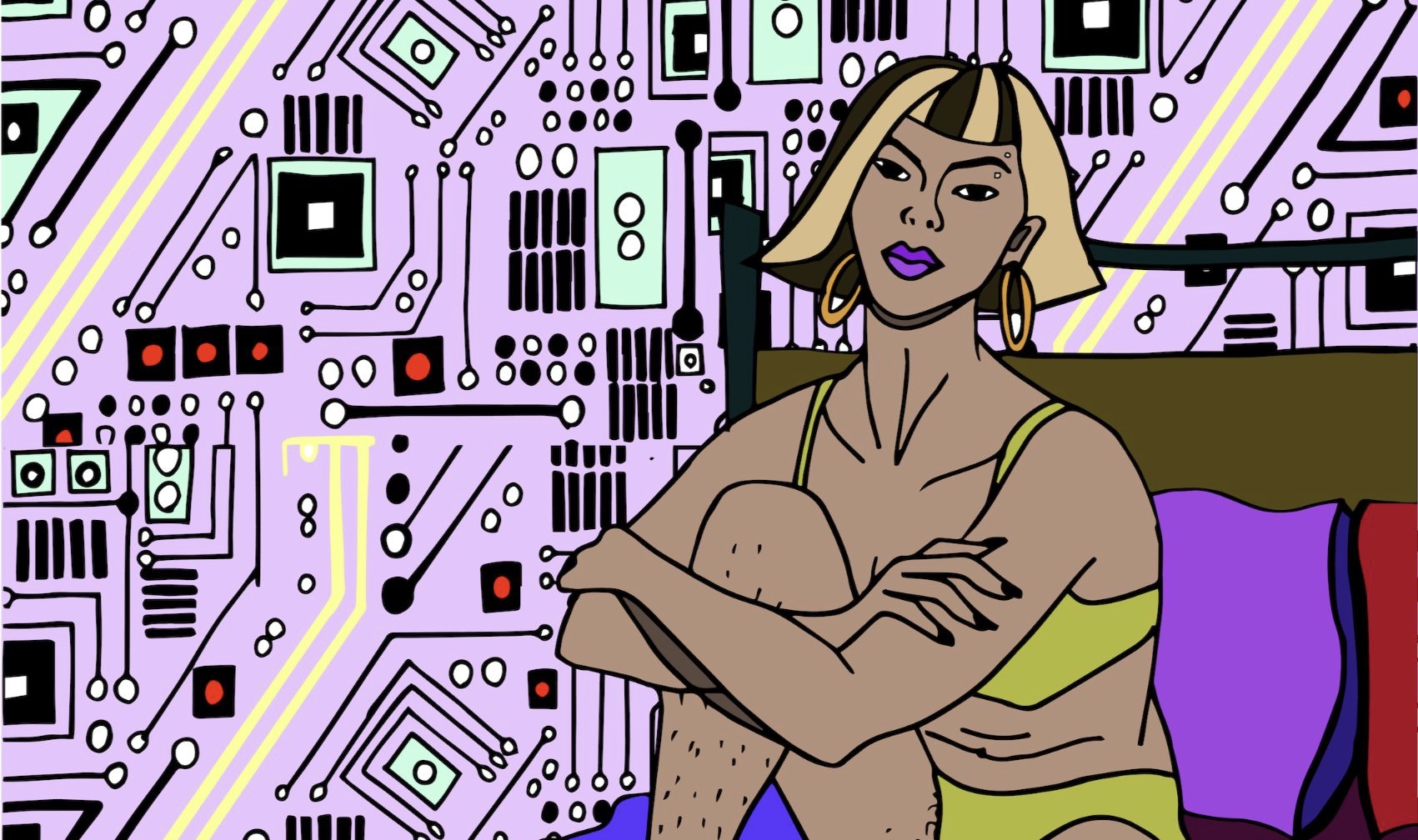 in conversation with Alison Falk

Sex Tech Space is a Pittsburgh-based, bi-monthly publication aimed at technologists and engineers that creates dialogue on the intersection of technology and sexuality. shado sat down with founder Alison Falk to talk all things sextech and the way she is pioneering equality, diversity and sex workers’ rights within the industry.

What motivated you to start Sex Tech Space?

I became very interested in sextech and began doing a lot of research on the subject in my free time. It was a field of technology that I felt at home in and wanted to find some way I could pivot myself and my work in a way that let me apply my knowledge and expertise to the subject. I couldn’t find an opportunity at that time, so I decided to create one myself. It took a lot of iterations to find something where I felt like I could make the most impact and solve one of the major problems within this sector – what actually is it; what can it be used for; and what type of major issues can it help solve? I hope STS can help people to stop letting their imaginations get in the way of the facts and create space for the communities and bodies that have been marginalised for so long.

How do you envisage Sex Tech Space to create solutions for problems such as sexual violence and human trafficking?

I believe that innovations in sextech can help create a more progressive and inclusive sex education for younger people. As future generations grow up in conjunction with cell phones and access to the internet, it’s important to make sure the accuracy of information surrounding sexual health and wellness is unbiased and that they are not getting sexual cues from porn – which is typically not real-world sex. By establishing a stronger foundation with our bodies from an earlier age, we can create an environment where we don’t let other people make decisions about our bodies for us nor be ashamed to come forward in cases of misconduct as well as be able to identify if something wrong is happening.

As for human trafficking, it’s important to know what type of technology is currently being used, who created it, and whether or not it is based on accurate data. Data shows that tech is not an appropriate solution for human trafficking and that service-based solutions like housing are more ideal. This is one of those situations where it becomes “just because we can, doesn’t mean we should.” As a byproduct many marginalised communities are impacted in negative ways.

Could you tell us a bit more about your recent advocacy for sex workers in Pittsburgh and how current movements in Tech disproportionately affects them?

There is a company in Pittsburgh that creates technology for “policing” which recently held a hackathon using free labor from participants to develop tech solutions to advance their cause. Based on research, we know as previously mentioned that advanced technology, especially in conjunction with policing, is not only not the answer to decreasing human sex trafficking but also extremely harmful to marginalized groups and can result in abuse of power, sexual assault, deportation, and so on. Consensual sex workers and progressive groups from around the country petitioned for the event to be canceled but their voices were ignored. Major stakeholders of any technical product or service should ALWAYS be included in the design process – else you are perpetuating purposeful exclusion.

Have how you been received by other tech industries in Pittsburgh and how do you hope to combat negativity and hostility towards the industry?

The majority of the time people are really interested in hearing about sextech – which I think could be great for our city because we are a health hub as well as a tech hub and thus in a prime position for us to be leaders in this field. However, there are some people who let their imaginations get in the way of the facts and ask to not be associated with me or the work I do advocating for women and femmes in tech. In the end, I don’t see it as a loss because I want to surround myself with people who are willing to take risks to advance the community rather than hold it back.

In your experience, does this stem from a reluctance to engage in the industry as a whole because it is so new, or due to deeper rooted stigmas/disinterest from men in women’s sexual pleasure and wellbeing?

It is definitely based on stigmas and personal beliefs.

What are you most excited by in the sextech industry at the moment – and where do you hope to see Sex Tech Space within this in the next few years?

I am excited that more people are learning about it and that it is creating a space for the voices and bodies that didn’t have a space before. I know sextech will be mainstream in a few years and I hope that STS will expand to become a platform for interested people to gain a strong foundational understanding of the industry as well as find jobs and meet one another.

How have your community responded to Sex Tech Space and what have women’s responses been to the space and what you are building?

I’m humbled by the amount of positive feedback I’ve received by people from all backgrounds. I’ve learned a lot as each issue is being put together and it makes me excited to grow alongside the people who read it as well. However there have also been opposing situations where I’ve been blocked online by women in STEM that I looked up to, or have been told they hope I find God because they think what I talk about is immoral and that I am not a good “representation” for women in tech. I find the irony entertaining but at the same time I recognize that we are all on different paths and you cannot force someone to accept something they have been taught to fear.

How do you hope Sex Tech Space will add to inclusivity and diversity in the Tech world?

So often when we talk about D&I we put it in this box that only includes intersections of gender and race. But D&I can be expanded to include fields of technology/occupations that are being excluded as a valid segment of the industry — like sextech or sex work. This is especially important considering sextech exists in many other facets of tech like edtech (sexed), fintech (payment processors), and healthtech (sexual health and wellness).

What is the theme of the next issue and what are you hoping to address within in it?

The theme of the next issue will be on accessibility and the aim is to address not only the design theory of products and services that come out of the sextech field but also the concept of “access” to such information and innovations as well.

Find out more on the Sex Tech Space website

Illustrations by Molly Hankinson
Molly Hankinson is a visual artist from South-East London currently living and working in Glasgow, where she has a studio at SWG3 Warehouse. Her work primarily focuses on the notion of contemporary femininity within the everyday, exploring themes surrounding (self)representation, reclamation and celebration within the wider umbrella of womxnhood. Working primarily in painting and printmaking, her most recent work is illustrative in form, using a combination of hand-drawn and digital techniques to create her prints. She is currently working on a project which focuses on representing womxn/non-binary creatives on Instagram, and her paintings are soon to be auctioned in May 2019 in the City of London, as part of The Aon Community Art Award scheme.