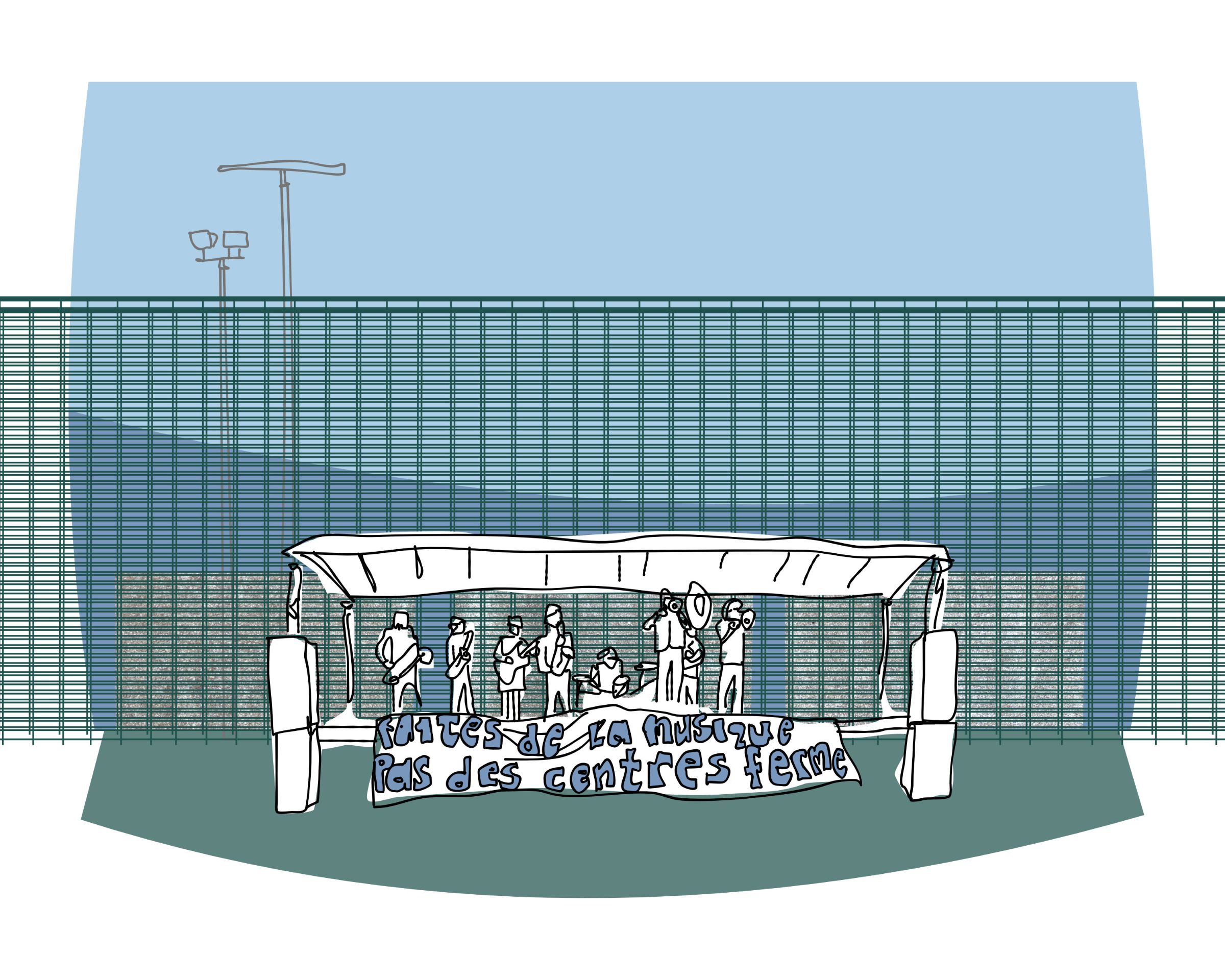 Bordering the runway of Zaventem Airport, the detention centre called 127bis of Stennokkerzeel detains up to 192 dismissed asylum seekers and undocumented migrants whose applications are pending. The centre looks like an actual prison, where detainees are not allowed to leave the facility, and where access to healthcare and visitors are restricted. On May 4 2019, the ninth edition of Steenrock took place to protest against the immigration detention centre, featuring concerts, workshops, and speeches facing the detainees’ barred windows. While the Belgian government has recently inaugurated a new women’s detention centre next to the 127bis, an event like Steenrock is an artistic action of solidarity to protest against the human rights violations these Humans are facing and spreads the message that No one is illegal. During this event, I got the chance to interview one of the founders of the event, Matthieu, and Manu, part of the SCI assiociation represented at the festival.

Why the choice of a celebration – concert?

Matthieu: I am part of the CRER, and we often came to the detention centre to protest against the detainees’ treatment. We were around 30 to 40 people and we wanted to attract more people. This place is sad, bordering the airport runway – it is a forgotten place, which is the will of the State. We asked ourselves what we could do to raise awareness about what is going on 10 minutes away from Brussels so the population can realise that a detention centre looks like an actual prison. We decided to use art and music to create a positive and peaceful demonstration of solidarity. All of this aims at gathering people and being as loud as possible. And that is a success – every year Steenrock gathers around 500 to 1,000 people. Music allows us to reach a broader audience. Steenrock is a militant action but peaceful and musical.

Manu: First of all, a concert gathers more people. At Steenrock festival, music plays a key role at engaging people, spreading values, and most of all, spreading a message. The localisation of the event also plays an important role because the scene itself spreads a powerful message through detainees that we can see through bars. Second of all, how can men overall feel happy surrounded by injustice? The choice of a celebration at Steenrock can trigger guilt in the sense that we are celebrating right next to people who are detained. The key element is to transform this feeling of guilt into solidarity. Through this kind of event, there is this essential form of expression of emotions. Art exists to express feelings and emotions such as sadness, anger, and joy. Throughout Steenrock, we are experiencing those emotions and emotions are meant to be lived together.

Does art, and in the case of Steenrock, music, go beyond words, and is art universal?

Matthieu: Art is universal and powerful, art goes beyond words. Music, and other sorts of art, can be used to what is called ‘engaged art’. This means that through art, people can spread a powerful message. It is the same for music, music will make people sing and dance.

Manu: Steenrock features a series of live music performances, speeches, and phone calls with detainees from inside the centres. Art reaches people beyond their culture, history, and language. What is unique at Steenrock is that it is an event of encounters and solidarity even though we are separated by bars and fences. The contact is thus limited but however linked by music.

To abolish detention centres, what is the priority, change mentalities among the population to gain support and in turn pressure politics – bottom up – or, pressure politics first – top down – or, both simultaneously?

Manu: Both simultaneously. The fact of seeing detention centres in reality affects more people, which make them talk about it and spread the word. To see detainees waving white flags through their windows is a powerful message and speaks by itself, which makes us want to fight more for their rights and continue to organise events such as Steenrock.

The Belgian authorities have detained children in detention centres across the country in the past years and are currently talking about doing it again in the future. How to explain the lack of mobilisation from the civil society in regards to detention centres and such human and children rights violation?

Matthieu: How does it not mobilise more people… I have actually no answer to that question. I am myself deeply saddened by that lack of mobilisation.

There is a banalisation of violence.

We see people dying far away but also on our streets, and still, no big change is being done. However, things are happening, the yellow vest movement in France for example. Can we talk about the beginning of a new era of mobilisation? When are people going to wake up? The Belgian government is detaining migrants in those centres, how far will they have to go to trigger a global mobilisation? Do we have to wait for protesters to be killed?

We need to stand against detention centres and speak up, and that is what we are trying to do here at Steenrock.

Manu: In Belgium, we are used to see what comes to solidarity taken in charge by the State and its institutions. We can refer them as cold solidarities in the sense that citizens pay taxes and expect the aid to be redistributed by the State through services. We have less of a warm and direct solidarity to persons in need. However, in regards to the current refugee crisis, amazing projects have been created through civil society initiatives and projects. The mobilisation in regards to detention centres is unfortunately different. When it comes to detention centres, they look like actual prisons, which make people think that the people inside are dangerous. Therefore, I think there is this fear of danger, which cultivates in turn the fear of foreigners.

Matthieu Thonon is one of the founders of the Steenrock Festival and part of the CRER collective, which protest against raids and expulsions of undocumented migrants and calls for their regularisation.

Manu Toussaint is part of SCI Belgium, which is part of the international civil services organising social projects through culture and diversity across the world.