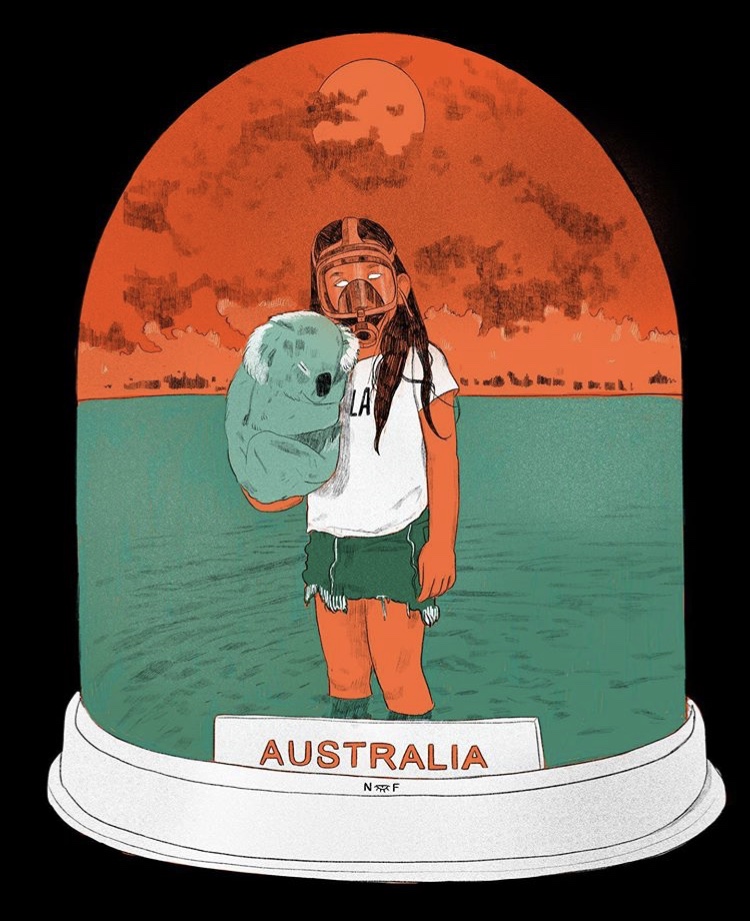 Navigating through the storm: how climate change gets corrupted

Eloise Moench discusses how the climate crisis has become a global moral dilemma.

As I’m sure you have heard, the world is burning.

Four million hectares of land are currently alight in Australia, one of the worst bushfire seasons ever witnessed in the country. Last summer, we saw the Amazon ablaze as forest fires ravaged through large parts of Northern Brazil.

The sky in New Zealand is currently tea-stained an eerie yellow because its neighbour is suffering from third degree burns. Sao Paulo – a city that is as far away from the Amazon as Istanbul is from London – was plunged into daytime darkness last August because of travelling fumes from the rainforest fires. The land is alight and the sky is carrying the message, yet the world is still ignoring these smoke signals.

The IPCC (Intergovernmental Panel on Climate Change) released a special report in 2018, contributed to by over a thousand scientists and world-renowned experts. The report came to a clear and definite conclusion: if global temperatures reach an average of 1.5C above pre-industrial levels, this will have catastrophic climatic effects on the world. Two years on and at the helm of a new century, we are still sprinting towards this tipping point.

On the release of this report, Saudi Arabia claimed that the findings contained “gaps”. The US also refused to endorse its findings. Kuwait and Russia jumped on the bandwagon of disbelief, trying to thwart its legitimacy so that it could not be an official item of discussion in the UN’s 2019 convention on climate change. Basically the climate version of thinking 9/11 was an inside job and Tupac escaped death, these countries called the report out as a conspiracy and used their political might to try and block it out of global discussion.

So, with evidence as clear as a (worryingly hot) summer’s day, why is it so possible for world powers to simply deny and evade their responsibility to shoulder the burden of climate change?

This is a question that has entered into the philosophical realm in recent years as more ethical and political theorists have started to debate the collective morality of climate change. Environmental philosopher, Stephen Gardiner, has proposed an insightful theory as to why it is so easy for countries to compromise their climate related duties: climate change is a perfect moral storm.

The detrimental effects global warming is having globally as an ethical issue is unlike anything we have ever had to deal with before. This is because most of the moral dilemmas that we find ourselves in follow a pretty simple formula: One person or a group of people inflict harm onto another. The first person(s) can therefore be held accountable for the wrong. They need to resolve this harm through punishment or reparations, and once this has been done, justice has been served. Robberies, murders, fraud and most common wrongdoings follow this blueprint. Our law courts and theoretical ideas of justice are underpinned by this simple idea of perpetrator and victim.

Yet climate change blows this simple ethical formula out the water.

This is because of the international and intergenerational nature of the problem. Firstly, climate change is a global issue. From Iphone production in Zhengzhou to fracking in The Marcellus Shale, the release of harmful emissions is contributed to all over the world. Twenty-six percent of the world’s ice-free land is currently used for livestock grazing; this means that over a quarter of the inhabitable planet is now used for an evidently climate harming industry. So, the question arises, whose neck gets placed on the line? Perhaps Europe and North America should accept the responsibility because they emitted an immense proportion of greenhouse gases during the industrial revolution. But, what about China or India, who are now charging ahead with high levels of ‘dirty’ development?

With so many people contributing to the problem, individual responsibility is spread so thin it can appear almost negligible.

Climate change is also an intergenerational issue. It’s not just your generation that made climate change a problem, but it was your grandmothers and your great-grandmothers. It was Winston Churchill, it was Albert Einstein, it was Lincoln and Galileo and Marx; it was everyone who has been alive since the 18th Century, and even in part before. Molecules of carbon dioxide can stay in the upper atmosphere for between 5-200 years, so some carbon molecules are celebrating their 200th birthday whereas humans rarely make it past 100. We have the weight of our ancestors on our shoulders as we begin to accept the blame for the climate problem. So the question for each generation arises: why us? Even as the collective noose has been tightening, the option of leaving it to the next generation to resolve the climate problem has always been readily available. Having to pick up the slack for the wrong of the past feels unfair, it’s not in keeping with our usual concept of justice. It veils another dark cloud into our raging moral storm.

In Gardiner’s original essay he discusses how fragmentation of agency is one of the most problematic factors of the climate storm. Those who are responsible agents, who caused the problem, are fragmented in a kaleidoscope effect throughout the world and throughout history. The global nature of this agency problem could be resolved in an ideal world. In theory we could develop some kind of utopian society, governed by a harmonious worldwide institution that dishes out the costs and claims of climate change according to an agreed upon idea of distributive justice. Yet in practice we certainly have a long way to go for any neutral worldwide decisions to be made. Furthermore the intergenerational fragmentation of agency adds a whole new dimension of complexity. There is no cosmic omnipotent law court that can call Edwin Drake or Christopher Columbus up to the stand so that they can now accept their fill of blame.

Because of the intergenerational and global scale of the climate problem, we can’t simply point at one country or malignant wrongdoer and say “It is your fault! You have caused climate harm.” We also can’t point at one suffering country and say “you are the victim of this problem, you should receive repatriation.” Our well-trodden ideas of victims and perpetrators are skewed. What is left is a situation more like going for a meal with a group of skint friends. Everyone agrees to pay for what they had and everyone claims they paid for their starters mains and drinks, yet for some reason there is still 30 quid left on the bill. Nobody wants to pay this off because nobody thinks they had the extra side salad, but the annoyed waitress needs somebody to settle the leftover.

A problem that spans so widely through both space (because of its global scale) and time (because of its historical reach) enables a situation where countries and government powers can try and side step what moral responsibility they do have. Cue: climate change denial and avoidance. When we acknowledge how hard it is to grapple with the morality of the climate problem, the “gentleman’s agreement” that is smugly held between oil trading countries in order to refute IPCC reports and deny the catastrophic effects we can see all around hardly becomes surprising. It is evident why these countries intend to wipe their hands clean of the issue altogether – they are riding the storm.