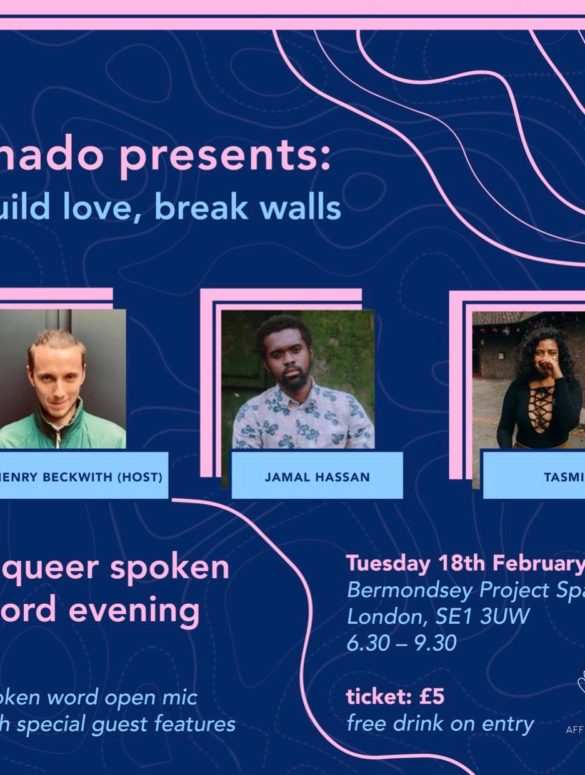 This is part of shado’s residency in Bermondsey Project Space for two weeks in celebration of LGBTQI+ history month. This year, we are focusing specifically on the experiences of, and barriers faced by, those seeking gender or sexual asylum.

The residency showcases a collection of events and exhibition to celebrate the unifying aspects of love without borders.

Henry is a 25 year old London based spoken word artist whose work depicts the complexities of being a young gay man in modern Britain. He believes that poetry is healing for both the writer and the listener. He runs a spoken work and performance poetry podcast called Word Spoken. On the show each episode features a different spoken word artists performing three different pieces alongside an in depth conversation about some of this issues and themes raised in their work. To give Word Spoken a follow on Instagram head to @WordSpokenPodcast and keep an eye out for a new episode dropping on all platforms every Monday!

Jamal is the poetic equivalent of finding out that the drinks machine in your local McDonalds has quietly replaced its Pepsi button with spiced rum. He is confusing, frightening, delicious with ginger beer and lemon, and unhealthy in large doses. His poetry ranges from raw, hard-hitting snapshots of reality to downright silly. He likes to call himself Kid Anansi when he raps (he does not do this often) mainly because his arrogance has no bounds but also in homage to his Ghanaian heritage. He has featured at Boxed In, Peckham Festival, Chocolate Poetry Club, R.A.P Party and many more nights in London and Portsmouth.

Tasmia is an emerging producer, poet, performer and a founding member of Nijjormanush, an independent campaigning group that aims to educate, empower and organise Bengalis and Bangladeshis in the UK. They have previously been a writer in residence at the Nottingham Primary, performing work on stages such as Latitude, Free Word Centre, the New Cross Inn and the Rich Mix Centre. A Writing Room alumni, T’s writing explores the precarity and intricacies of imagining and manifesting queer futures and possibilities from the wardrobe/margins. They are also a facilitator and training, working with young people to build their communities and recently, training as an oral historian, on a project archiving the history of Bengali seamstresses in east London.

This event will be part of a 2-week residency between 1​1th – 22nd February ​at Bermondsey Project Space that shado is hosting in celebration of LGBTQI+ month.

The residency is celebrating and combining the work of organisations working on the ground and artists using their work as a tool for advocacy.

Alongside the exhibition, there is a a programme of events with local organisations including creative writing workshops, spoken word evenings and book clubs all celebrating the diverse contributions of London’s LGBTQI+ community.