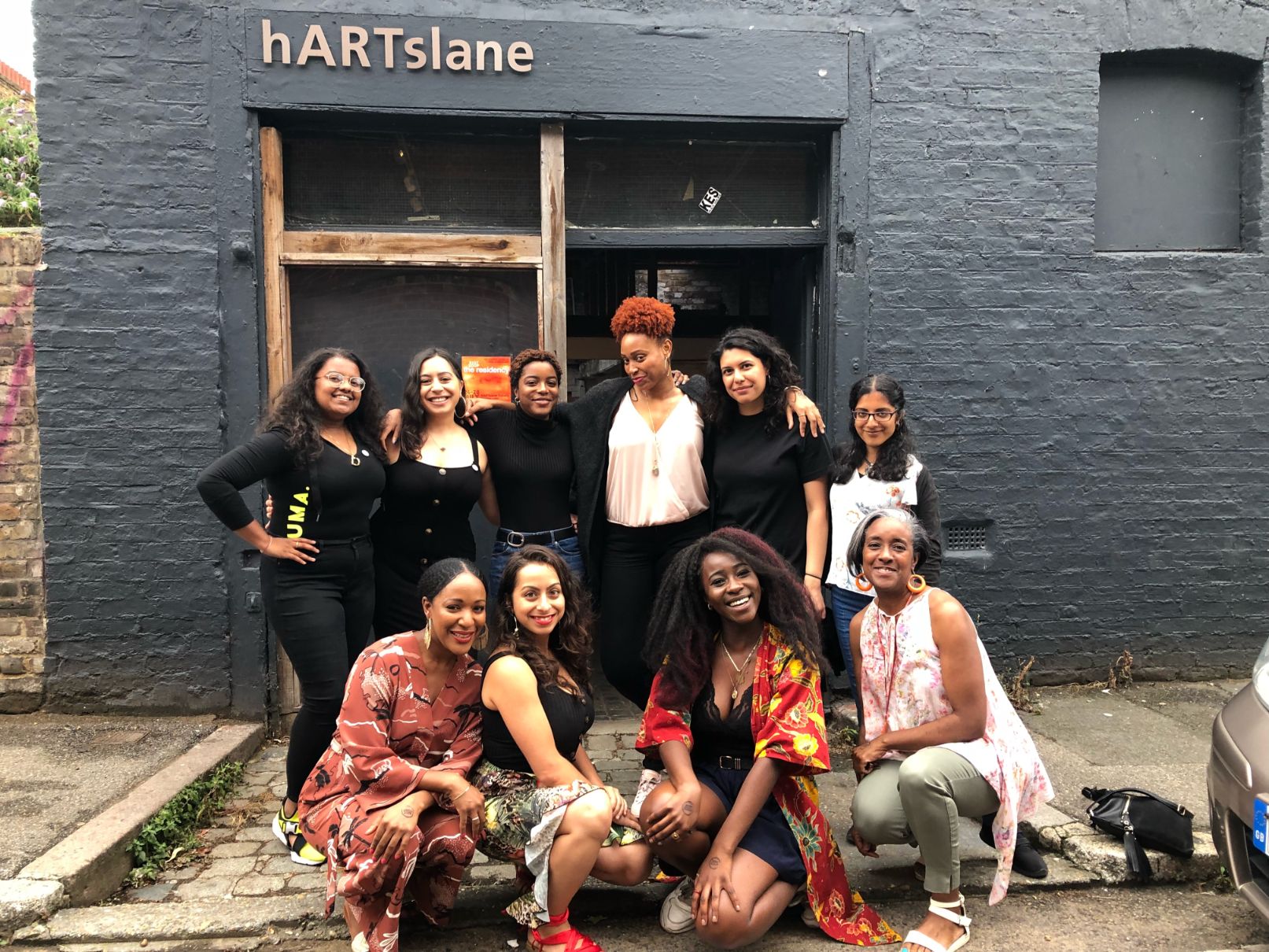 The Unseen & The Unspoken: The RIOT SOUP Residency

The word “riot” is often defined as a disturbance of peace. It is a bold word familiar to feminist groups looking to disrupt the status quo and highlight inequality. Juxtaposed against the word “soup”, it softens and indicates a sort of harmony, healing and togetherness. And that is exactly what emerging art collective RIOT SOUP is and aims to continue to achieve.

The 12 strong group made up of Black African, Caribbean, South East Asian and Middle Eastern women artists was created in January 2019 after founder Asma Istwani tried and failed to find a creative group to join that matched her own needs not only as a woman artist, but person of colour as well. She needed a space to create and grow as an artist but one where her experience and difference as a second generation Middle Eastern woman would be noticed, heard and valued as opposed to something that had to be diluted or cast aside in order to fit in. This fact, as well as the desire to see more women artists of colour represented in the visual art scene spurred a call out on various online sites to see if others would join her in the quest to create a community of like minded women and seize control of the narrative surrounding WOC, all the while seeing to their need of visibility within the artworld. Interest peaked and it became increasingly apparent that the diverse platform such as the one that now exists within the collective was both lacking yet high in demand.

United by their need to have autonomy over their own narratives and desire to discuss the issues that surround them as people of colour, women and artists: the group launched three months after meeting with a joint exhibition The Pilot. Built on a shoe-string budget and with the help of crowd-funding they showcased their respective works to the world, many for the first time. They drew in a crowd of warm and supportive art-lovers, affirming the need for a space such as the one RIOT SOUP was trying to carve. Soon after, the group hosted a short series of affordable art workshops aimed at engaging and bringing women of colour together in a way that would be both comfortable, enjoyable and most importantly accessible.

It wasn’t long before the group was invited to show at hARTslane gallery in New Cross. Each of the artists in the collective exhibited work that responded to the theme of the “The Unseen & The Unspoken” as set by the gallery. Coming from Black and “Ethnic Minority” backgrounds, all members of the group were in interesting positions where aspects of their respective communities are often portrayed negatively and in an exaggerated manner in the media, leading to a hyper-visibility that tends to ignore and overshadow the true range of experience of a woman of colour living in the UK. Similar to ‘The Pilot’, the varying styles of the individual artists did not clash in their most recent show and in fact, a commonality was evident in that each piece offered temporary relief to the typical limiting portrayals of WOC and allowed each narrative to be heard. 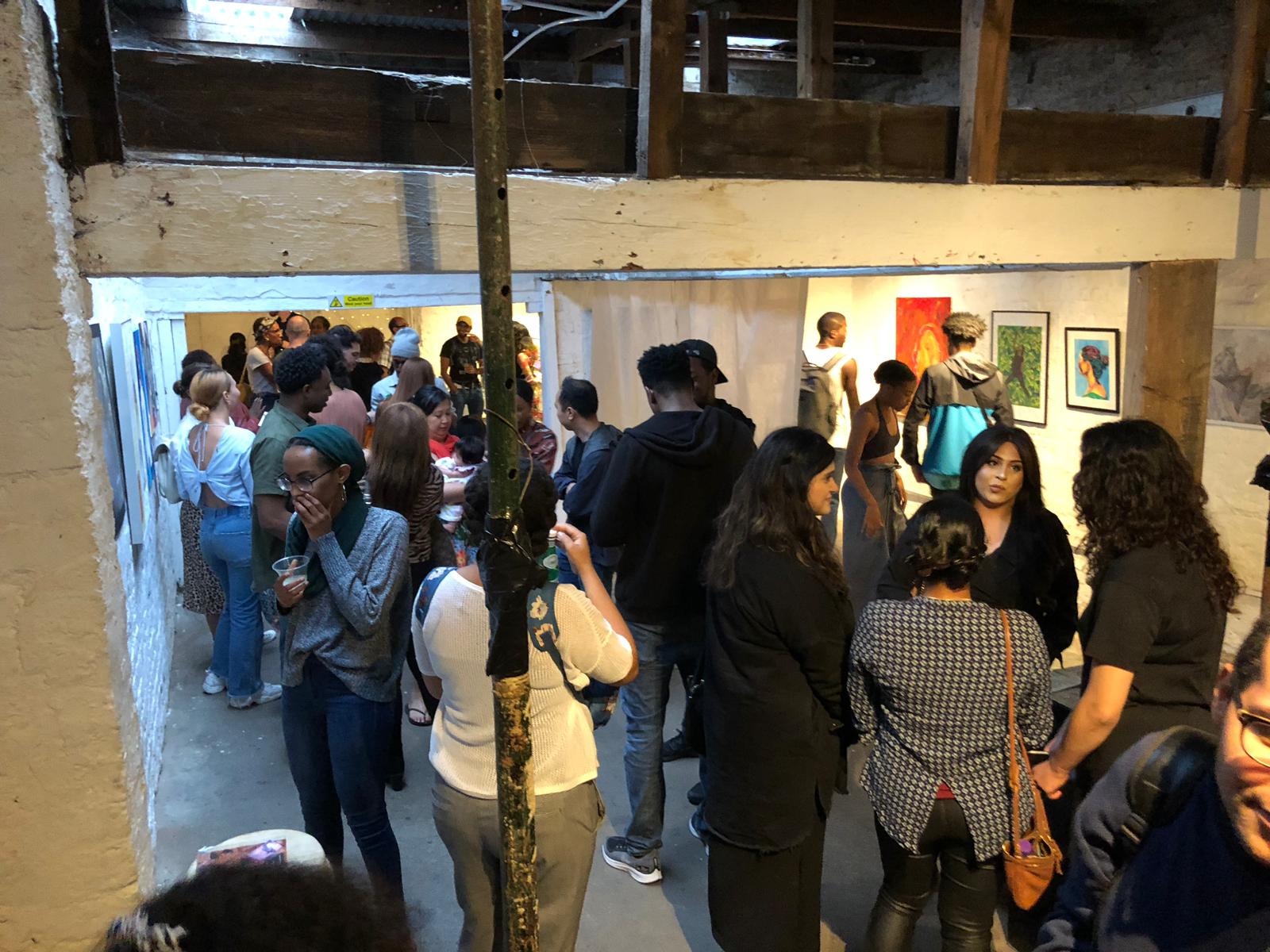 And in keeping with the theme of the exhibition and the ethos of the group, RIOT SOUP opened submissions to fellow women artists of colour in London. Select pieces were seamlessly interwoven between the collectives own work telling authentic nuanced stories which added to the theme of The Unseen & The Unspoken such as an installation referencing the atrocities at Grenfell Tower and a photograph entitled “Black Boy Joy” which shone light on innocence and playfulness of young Black boys; a depiction which is rarely shared in mass media.

Outside contributions were not limited to exhibited works but extended to showcasing talented dancers who spoke their truth through contemporary dance and performed to a full house on the main event night. This night also featured open mic slots which were open to the public to enable them to tell their stories through song, poetry, spoken word and music. 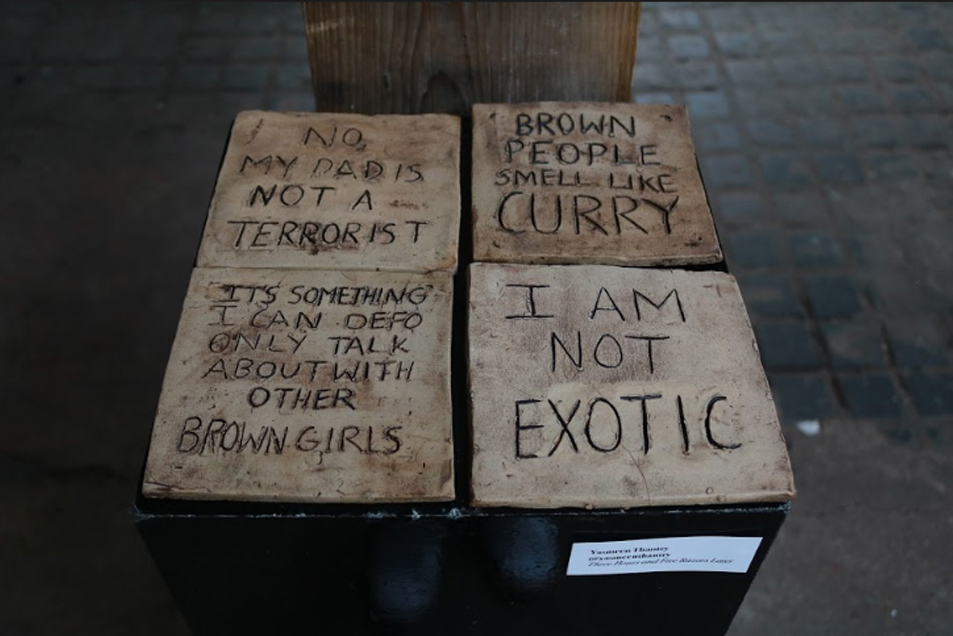 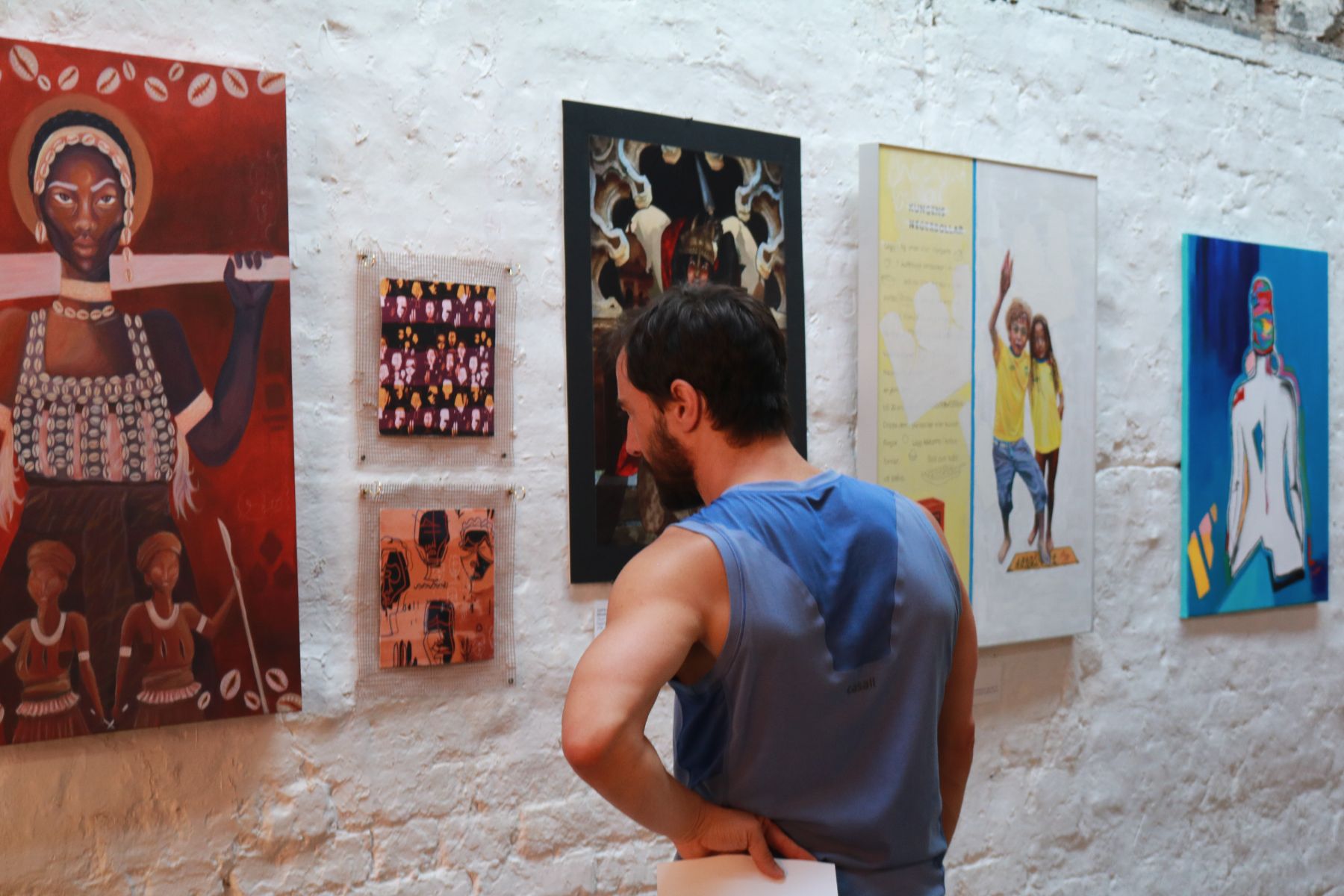 The heatwave may have broken that night but the group agreed that vibes that night soared. With a backdrop of twinkling fairy lights, home-made rum punch on tap and an array of patterned rugs, plush cushions and bean bags layered over one another for seating, the energy described as “wholesome” could be likened to a family reunion with all your favourite relatives and friends in attendance. 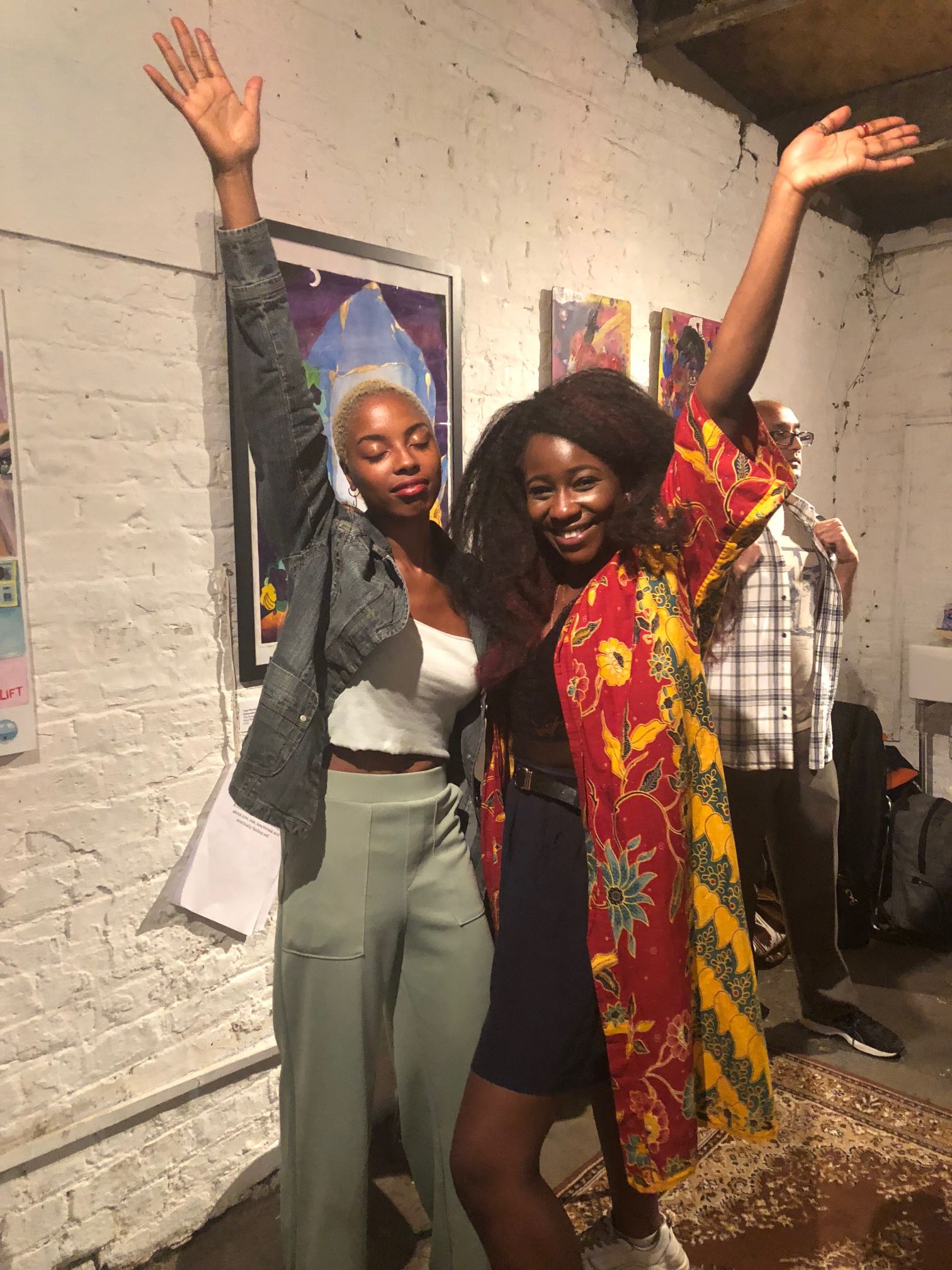 And to make sure that everyone left feeling seen and heard, all guests were encouraged to add to the collaborative mural wall of the gallery. Armed with paintbrushes and Posca pens, indiscriminate licence and freedom was given to each attendee regardless of age to express themselves and imprint their personality onto the gallery walls. Basic oval shapes of different shades and sizes were provided as a template for people to inject their creativity. Some guests utilised the template set, marking their presence within the shapes while others went outside the box, transforming the mural as they conveyed a feeling or emotional aspiration. The mural satisfied the need to rebel against childhood rules where the act of drawing on white walls would be labeled as an act of vandalism. The end result reflected the diverse group of people that the exhibition pulled and gave insight to the importance of play and creativity at every age, as parents and their children alike were seen to be scribbling alongside one another. 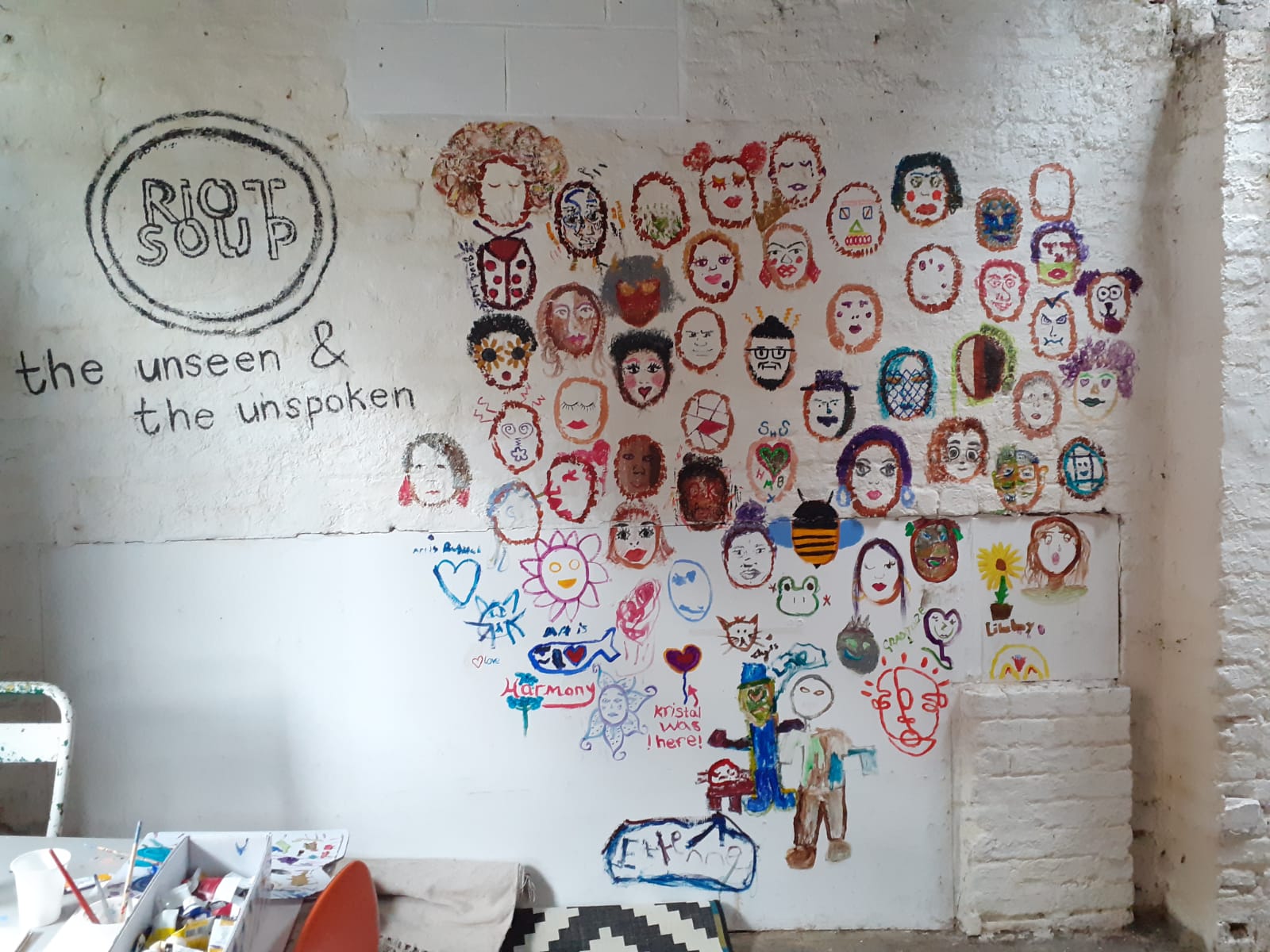 In an industry that notoriously tokenises women and artists of colour RIOT SOUP managed to take a positive and promising second step in promoting the visibility of women artists of colour in the UK and through their second exhibition, champion the voices of women of colour and their respective nuanced experiences and draw their narratives from the peripheral to the centre.

The group hopes the future of RIOT SOUP to continue to be a rich and vibrant one. And as the group grows and solidifies their position, welcoming to WOC and allies alike to join in the conversation, they hope to disrupt the creative industry until women artists of colour can all confidently consider themselves to be “real artists” and contenders in their own right and appreciated as significant contributors to the arts and culture in London and beyond.