How Bedside Productions is reframing pleasure

I was lucky enough to meet writer and editor of Bedside Productions, Polina Bachlakova, at Roskilde Festival in Denmark last month, where she had just hosted a panel event on sex, boundaries and consent in a festival setting.

As well as providing resources around safety and consent at festival spaces and sex parties, Bedside Productions is creating a new kind of vision for eroticism and intimacy based on these values. This starts with the production, where ‘emotional fluffers’ are a key part of filming on the day.

As well as being provided with emotional fluffers, the performers also have a key role in the final film. They decide on the sexual content, determine who they want to work with, and approve the final version.

Alongside producing films and curating sex parties across Copenhagen, Bedside Productions is also an educational platform that encourages nuanced approaches to sex, eroticism and intimacy in different settings.

“Pleasure is a huge part of life. It’s something people naturally seek so we need to make space for all different types of pleasure and make sure we have the resources available to make informed choices,” Polina tells me.

Taking a look at the resources available, I was immediately aware that I had never come across anything like them before and they made me question how I had managed my way into adulthood without a bank of information like this. According to Polina, I’m not the only one.

“In terms of drug taking and being sexually explorative, there’s not a lot of information out there on how to be safe. It’s just not accessible. People are always going to do drugs and going to have sex, so our aim is to make sure they have all the information they need.”

And this is exactly what Polina and the Bedside editorial team are ensuring through their range of guides exploring everything from drug taking at sex parties, how to survive shadow bans as a sex worker, and mixing drugs with medication.

When I ask Polina about how we can navigate sex, boundaries and drugs at a festival, she emphasised the importance of negotiating consent in real-time.

“If someone says no, how do you accept that gracefully? If someone is pushing your boundaries, how can you be firm but gentle? We need to normalise a culture of having consent ingrained in our interactions,” Polina says.

“Having said this, we need to also remember that it’s not your responsibility to avoid getting assaulted. That’s the tricky thing – there’s only so much we can do individually but normalising language around consent is definitely a beginning in bringing the conversation forward.”

“Festivals are a reflection of all of the issues we have in society – as well as the pleasures, of course,” Polina continues, when I ask if boundaries and consent are particular issues within a festival space.

“It’s almost inevitable that assault and rape occur at festivals because the numbers are already so problematic in daily life. The problem might be magnified here but ultimately, it’s a wider societal issue.”

Like any other music festival, Roskilde is not immune to cases of sexual assault. However,  unlike other festival’s I’ve attended, it was clearly keen to acknowledge and address this issue through art and installations it had commissioned throughout the site.

For this year’s festival, Swedish graffiti artist Carolina Falkholt created a mural that incorporated a personal testimony about an assault that previously took place at Roskilde. A powerful message emblazoned across one of the main stages, the artwork highlights how staff are aware of the fundamental issues that take place within festival spaces – and acknowledging they must do better.

Through the bold art at this year’s festival, it’s clear that Roskilde is prioritising safety and understands that collaborating with organisations such as Bedside Productions is a valuable way to do this.

And although these actions won’t eliminate these problems altogether, it is definitely something I welcomed. The festival proves that creating positive spaces for conversations around sex and pleasure can – and should – be normalised as a provision at events.

Roskilde Festival 2023 will take place from Saturday 24 June to Saturday 1 July. Find out more at roskilde-festival.dk and follow the official 2023 event on Facebook. 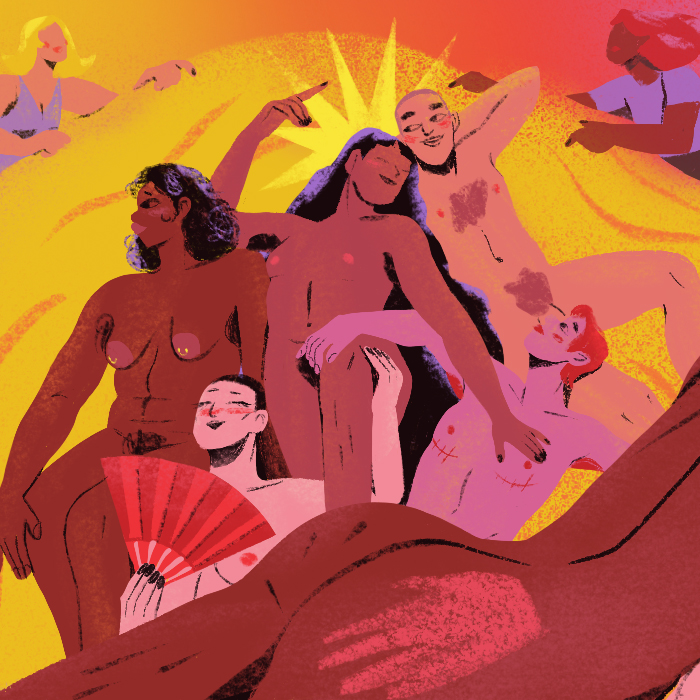