We’re hugely excited to introduce our latest collaboration; a takeover from B.G.U zine, a Tokyo-based queer, feminist zine and collective, that empowers individuals and fights for change. This piece is an introduction to the platform written by editor-in-chief Yume Morimoto, and is the first of a four-part series which will see shado re-publish 3 articles from their archive with new accompanying imagery commissioned by us.

In Japan, we are taught that persevering in silence is a virtue. Any struggle should be met with endurance and self-sacrifice. We are taught not to talk about our pain or our politics. We are ingrained to look, behave, and live a certain way. I myself was taught that true happiness would come in the form of a man with a promising career, and of course, a couple of children. Too bad I am pretty fucking queer and have an ‘abnormal’ uterus which would make conceiving a huge challenge.

I was angry. I felt alone. I wanted to learn more and I sure as hell wasn’t going to persevere in silence. I first turned to existing feminist and queer communities for a sense of belonging: an escape from a world that didn’t accept me. However, in the feminist circles, I found a whole lot of heteronormativity. Much of their focus and objective was ‘equality’ for governmentally and socially uncontested Japanese, cisgender, heterosexual, educated, able-bodied women. In the queer spaces too, I foundthe same issues. Transphobia, biphobia, misogyny, a whole lot of racism, lookism, ableism, and different-isms I just could not accept. It was yet another world where I didn’t quite belong. How could people who know the pain of oppression be complicit, or even contribute to the oppression against others?

That’s where B.G.U. started. I first wanted to make a platform for people like me. The angry and lonely people who didn’t quite fit into the clean-cut boxes that Japanese society, and even the feminist and queer circles had established. It was in 2017 that a few friends and I wrote about our emotions, our struggles, our wants and needs, our pain and our politics; the very things we had long been taught to repress. This gradually grew into B.G.U.

Simply put, B.G.U. is a queer, intersectional feminist collective and paper-based free bilingual zine based in Tokyo. That’s still quite the mouthful, and some of those words can be met with empty stares that seem to imply, “Queer-what? Intersectional who? What the heck is a zine?” I encounter this puzzled reaction especially in Japan, where the conservative party has consistently ruled, enforcing a society where transgender folk are required to go through sterilisation to change their legal gender identity and, same sex marriage is illegal.

Once again, Japan is ranked at an abysmal 121st out of 153 countries in the Global Gender Gap Index. Of course, that is just the tip of the colossal iceberg of various types of oppression. Under the glossy, modern, polite facade of talking toilets and robot restaurants, is a society where patriarchy, hetero-cis-normativity, ableism, racism, classism, ethnocentrism, and xenophobia permeate everywhere.

B.G.U now actively fights to end all forms of oppression. In the beginning however, the focus of B.G.U. was very much on our own experiences.  I am not ashamed to admit that our scope was pretty myopic. We wanted to be free from the oppressions that we ourselves had faced firsthand. As our community grew, we engaged with people from a multiplicity of different backgrounds, and we realised there were boxes that we had established in ourselves too-boxes that we needed to unlearn and fight to dismantle.

B.G.U. stands for “Be ji-yuu” (自由 jiyuu means free in Japanese, so essentially B.G.U. means “Be Free”) and it formerly stood for “Boys, Girls, United”. We soon realised that the latter meaning was extremely binary and cisnormative. By the second issue, we had completely abandoned it. Now, we simply stand for the message, “Be free”.

B.G.U. is about learning and unlearning together. We admit and reflect on our own privileges and mistakes, so we can continue to evolve and grow, to free ourselves from the rigid boxes that society has deeply ingrained in us. We stand for intersectional feminism because there are a multitude of different forms of injustice and oppression that women and gender non-conforming people face everyday.

We believe queer is not simply an all-encompassing identity, but also a practice. It is a word with so much history and power from BIPOC, trans, sex worker, activist predecessors. By stating that we are a queer zine/collective, we emphasise that we won’t abide by the existing systems and institutions.

We are committing to deconstruction and decolonisation. We will fight for all queers, and against all forms of oppression. We are a free bilingual zine because we believe accessibility is key in creating collective change. In a world where everything is monetised and digitised, we want to create our own narratives and represent our unfiltered selves.

As pop culture, media, huge brands, and corporations in Japan (and elsewhere) suddenly start being part of the discourse surrounding empowerment and equality, I think about B.G.U. too and what will lead to actual change. Often, movements are absorbed into exploitative capitalist structures which oversimplify the unresolved, not so “pretty” issues. Feminism and queerness are sanitized of their nitty gritty parts to ultimately sell a product or improve a brand’s image. People with power and privilege conveniently choose bits and pieces from oppressed and marginalised individuals, communities, movements, extracting only the “pretty” bits that sell.

Of course, there is beauty in queerness, of women and gender non-conforming individuals collectively taking action, creating together, and contending the status quo. It’s important to celebrate that. However, without the complexities, it’s just using a movement, glamorising it for financial gain and repackaging something that is so complex into a pretty pink box with a rainbow bow on top.

At B.G.U., we want queerness and feminism to be discussed with all of its ‘ugly’ bits. The abuse, the murder, the rape, the violence and trauma that affect women and gender non-conforming people globally-especially those that are disproportionately marginalised within society-immigrants, Black, Indigenous, trans people, sex workers. The inequalities that exist even within feminist or LGBTQIA+ circles due to race, ethnicity, gender, (dis)ability, class, religion, sexuality, immigrant status… these are the unignorable, “ugly” bits that are rarely touched upon by huge brands, ads, products, companies that ‘champion’ gender equality and paint their logos rainbow for Pride Month.

It is not enough to aesthetically claim that we’re feminist and LGBTQI+ friendly. Now, more than ever, we need  to represent our own narratives and embody intersectionality and queerness. We are not tokens, or ‘empowerment’ props. We tell our own stories. Again, B.G.U. is a queer, intersectional feminist, collective and paper-based free bilingual zine based in Tokyo. So, B.G.U. is a lot of things. It is free, and it is fluid. It doesn’t fit into a palatable, neatly packaged box, and neither do we. We are ever-changing and ever-growing and there is no fucking way we will persevere in silence.

This article has also been translated into Japanese over on B.G.U, the queer feminist zine HERE. Follow them on instagram HERE 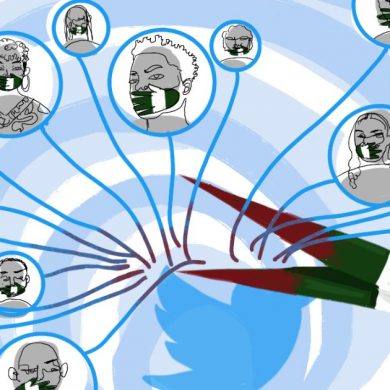