The struggle for food sovereignty in the ‘land of the maize’

Guatemala (Ixim Uleu – the land of the Maize) is a vibrant territory filled with life. Its range of climates and landscapes make it the fifth most biodiverse country in the world. For generations, the four communities, the Maya, Xinka, Garifuna and Mestizo peoples have protected and nurtured all life in their territories.

The land is sown into their vision of the world. In Popol Vuh, the sacred book of the Mayan people, it says that humans themselves were born from maize. The vision is one based on the harmonious relationship of all the elements in the universe – where the earth is the mother who gives life to the world and maize (corn) is a sacred symbol which this vision revolves around.

“Our seeds are sacred to us and our communities,” says David Paredes, a member of the National Network in Defence of Food Sovereignty in Guatemala (REDSAG). “Seeds are the basis of all life. There is a very strong relationship between our people and our seeds, they are like our children. Our practice of nurturing and protecting our seeds has evolved over thousands of years.”

REDSAG was set up in 2004 in order to articulate the struggle of over 60 organisations that are working on a grassroots level to build food sovereignty in the country.

The fight for food sovereignty

REDSAG’S fight for food sovereignty involves defending their lands, forests, waters and ecosystems. But more than just being a fight to preserve biodiversity, their work is also fundamentally about preserving their ancestral knowledges and spirituality as Indigenous peoples.

A key piece of ancestral knowledges is the ancestral Mayan agricultural system known as milpa, or A’biix, which involves growing maize alongside other crops such as squash, beans and potatoes.

This system is self-sustaining, highly productive and produces enough nutrients to make it the basis of a stable diet. Communities are now recovering this ancestral technique and using it as a form of permaculture to confront the invasion of monocultures in their territories.

A history of dispossession and dependency

During the 19th century, Mayan communities were dispossessed from their lands to make way for the establishment of large-scale plantations. Communal ownership of the land was abolished and Indigenous and Afro-descendent communities were forced into indentured labour. These plantations laid the seeds for the introduction of an intensive monoculture agricultural model, as well as the mass private ownership of land by foreign transnational companies.

By the 1930s, the American-owned United Fruit Company was the single largest landowner in Guatemala. It had so much geo-political power that when democratically elected President Jacobo Árbenz came into power trying to redistribute unused land owned by the United Fruit Company to landless peasants, a CIA-sponsored coup overthrew him.

This led to a 36-year long conflict in which over 200,000 people were killed and nearly one million displaced, the majority being Maya.

The 1950s saw the beginning of the ‘Green Revolution’. Hybrid seeds and chemical fertilisers were handed out to peasant communities by the government and foreign aid organisations under the pretence that they were part of a poverty alleviation programme. By the end of the century genetically modified (GM) crops were also introduced – including GM maize which, when cross-pollinated with native maize, can contaminate it.

“The agro-industry is a monster,” David tells me. “They use advertising to get communities to adopt this form of production. They dominate the corporate media and have the televisions at their service, even the state works for them. The Ministry of Agriculture has big programmes focused solely on promoting chemical fertilisers.”

He goes on to explain that after years of this intensive farming practices communities are now feeling the consequences: “The worldwide inflation that we are experiencing today is exposing to people the dependency that has been created by these systems and how our autonomy has been broken down.”

David explains that, as a result, many people are now realising that they need to rescue their ancestral practices because before they never had these problems.

This is also contributing to serious health and ecocidal implications in various communities. When it rains the toxins in the chemical fertiliser flow into rivers which has resulted in the contamination of various water bodies.

One example occurred in 2016 in the River La Pasion in Sayaxché, the biggest riverside community in Guatemala, where thousands of fish and turtles were found floating lifeless in the river after heavy rains.

The communities blamed the African Palm agribusiness REPSA as high concentrations of the pesticide Malathion were found in the river. Not only did the ecological disaster cause the death of more than 20 different species, but more than 12,000 people were directly affected.

REDSAG denounces that various harmful agro-toxins that are prohibited in other countries like Glyphosate are still being used in Guatemala.

As an organisation they have long been resisting this logic that was brought in with the ‘Green Revolution’ and are instead promoting communities to recover their ancestral practices and work in a more sustainable way with the land and fighting for the self-determination of communities in Guatemala.

One of the ways they are doing this is through the formation of agroecology schools.

These schools are run through a method called ‘Campesino a Campesino‘, meaning ‘from peasant farmer to peasant farmer’. This methodology is based on the ideology of learning through doing.

The community’s land has become their own agroecological classroom; they identify the problems that their own territories are experiencing, share possible solutions to their context and act to transform them in order to build ‘el buen vivir‘, resilience and food sovereignty.

The organisation also engages in political education to strengthen their organisation as Indigenous and peasant farmers in order to understand why the country and continent is in the situation that it is in, as well as the structural inequalities that continue to exist.

Their schools are open to everyone in the community and promote intergenerational dialogue. They look at various topics such as water capturing, ancestral veterinary, food transformation, local cooperative economies and soil remediation.

David tells me: “We are reweaving our knowledges together. We are doing this as young people, adults, grandparents – the whole community is taking part in forming our own spaces or schools for an education that actually suits our context and community’s needs.”

David expresses the importance of soil remediation, as it is a way to slowly work the soil off of chemical fertilisers and allow it to restore itself. This is a fundamental step in communities building back their autonomy.

Another key process that REDSAG are working towards is building up their own local economies. They hold seed fairs or farmers markets where people can exchange their goods, share their seeds, buy fresh food and support each other in the process.

Finally, REDSAG’s most recent initiative to defend their biodiversity, as well their ancestral knowledge, is through proposing a new law at a national level called the ‘Initiative 6086, the Biodiversity and Ancestral Knowledge Law.

As stated in REDSAG’s communique: The proposed law seeks to defend biodiversity and ancestral knowledge from the extractive model, looting, plundering by companies and corrupt politicians; it also states that the use of ancestral knowledge should be for the benefit of indigenous peoples and humanity.

David asserts that the approving of this law would not be the end of the struggle but it would definitely be a huge step in the right direction – and would set a precedent for the entire continent. On the 31st May 2022, it was officially handed in to the National Congress of Guatemala and continues to be in process.

Communities across Abya Yala (Latin America) now more than ever need to start recovering their ancestral practices, building autonomy and building true planet repairs. The economic crisis being lived today is only a taste of what is to come with the climate crisis and all that it brings. Communities across the continent are waking up to this reality and are acting accordingly.

Now is a time for focusing on building community resilience, restoring sustainable agricultural systems like the milpa, stopping the harm and defending territories from further exploitation. 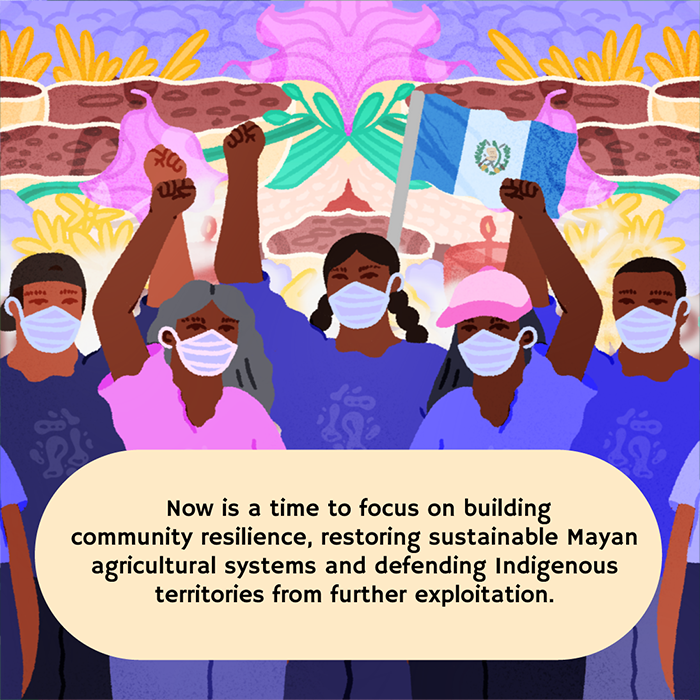 Illustration by Thumy Phan who says” In this piece I wanted to show the biodiversity of Guatemala, the plants, seeds, and corn. I used bright, bold colours to symbolise the vibrant and lively territories. I wanted to show the people in a power pose, a symbol of the dedication to fighting for Guatemala for the years to come.”