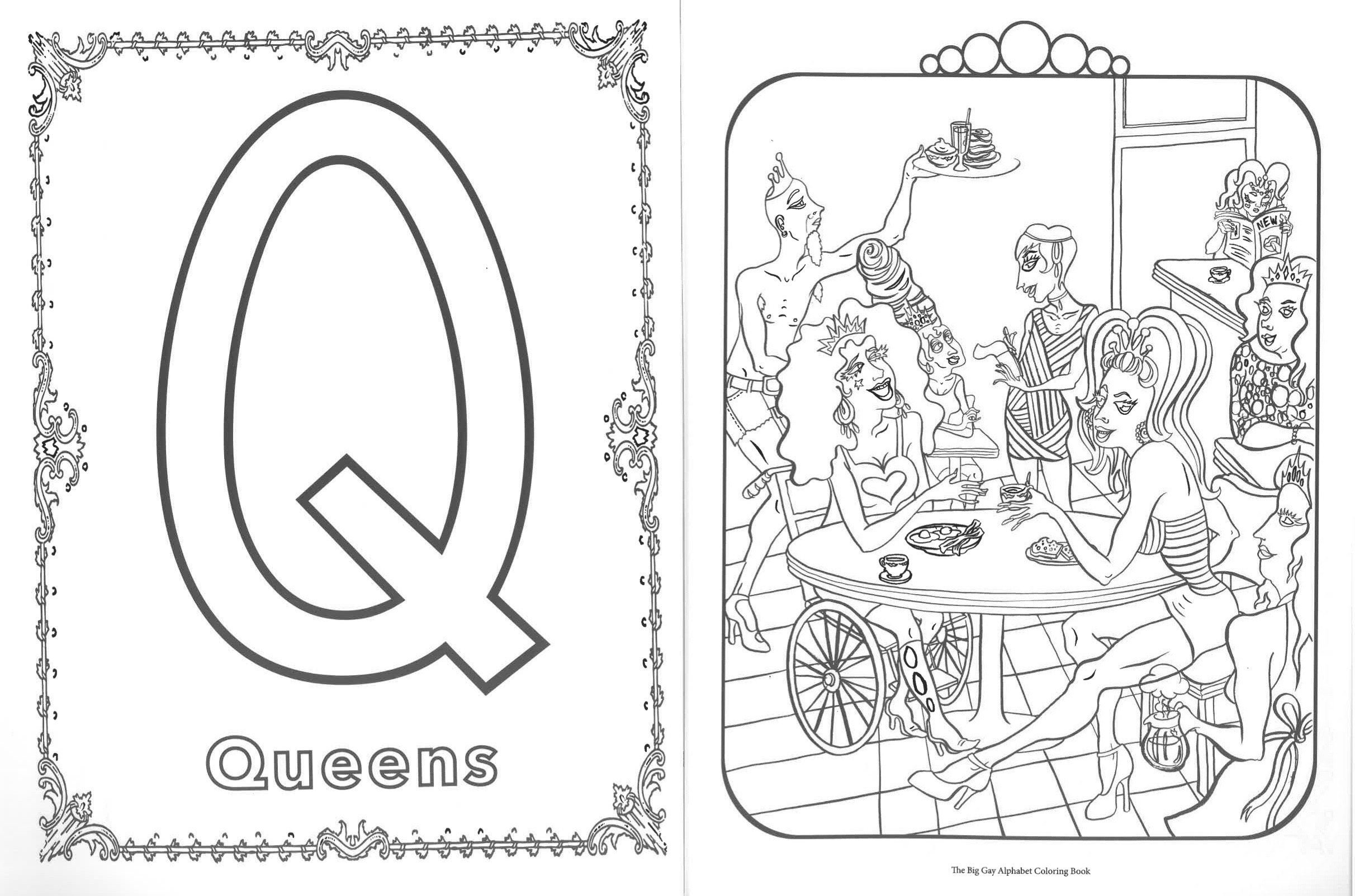 in conversation with Jacinta Bunnell

shado sat down with Jacinta Bunnell, author of a series of colouring books that seek to dismantle and challenge traditional gender stereotypes, to find out more about her motivations and what more can be done to question the stereotypes around us. Jacinta speaks openly about her own background in gender studies and how this has informed her approach that seeks to provide an accessible and inclusive way to provide space for inclusivity and representation – as she says;

If you don’t see yourself in popular media, how will you know that the way that you think, feel, dress, build family, and love is normal?

You are the creator of intersectional, gender-inclusive colouring books which aim to ‘bring greater understandings of gender fluidity, gender diversity and sexual orientation.’ Can you tell us a bit more about the main impetus behind their creation, and why you chose colouring books as your medium?

When I was a childcare provider and health educator, so much of the children’s media I came across was heteronormative and sexist, so I came together with another creative friend, Irit Reinheimer (also a childcare provider at the time) to write the first book girls will be boys will be girls will be…. We initially made it for our friends and community, but found that it had a wider appeal than we had originally envisioned. I loved the process of creating the first book so much, that I went on to create three more. Currently I have two more books on the way. 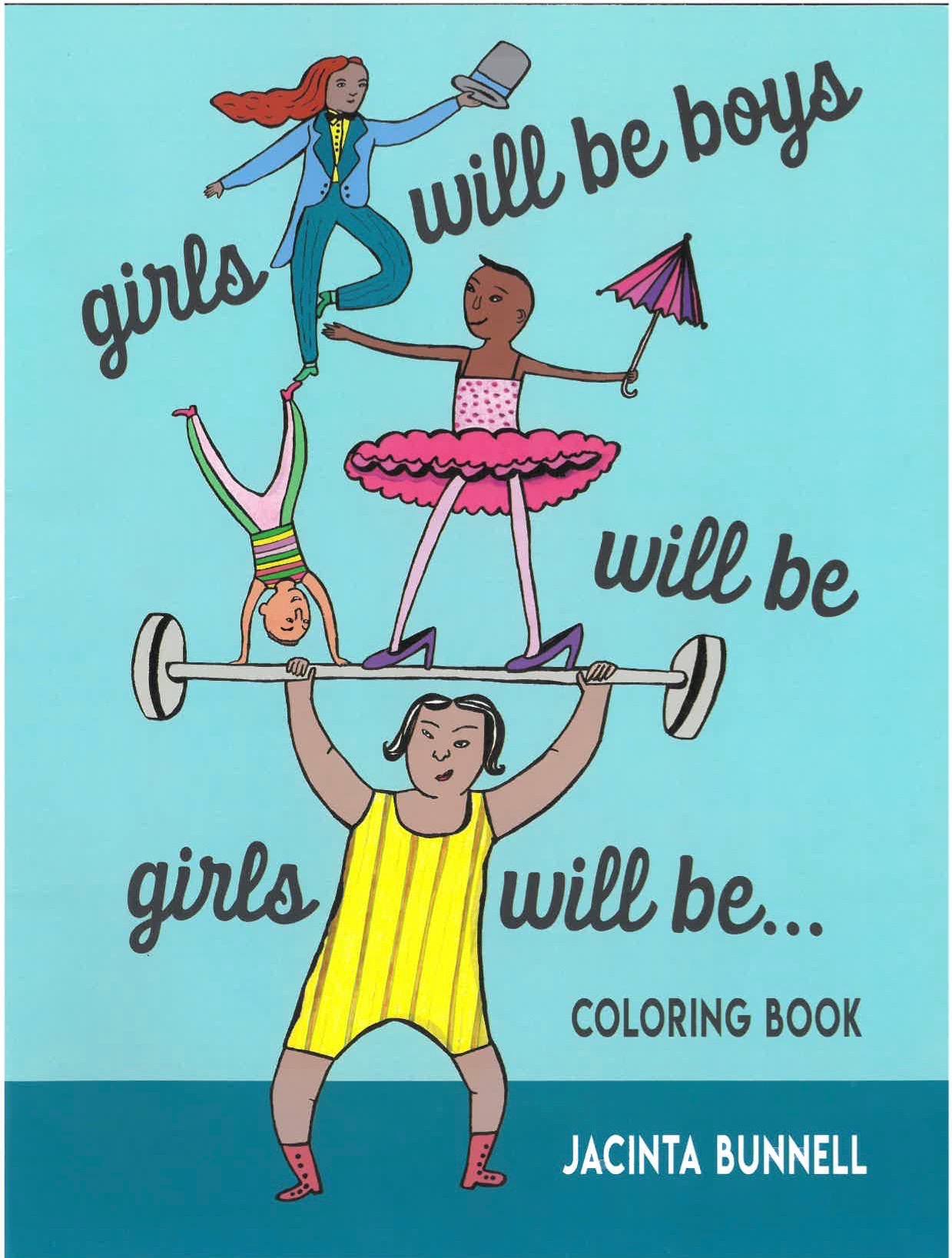 My hope is for people to have fun while learning something. I hope that readers come away with a deeper critique of children’s media and the way it introduces us to specific ideas about gender and sexuality. Though my work directly draws from feminist and queer scholarship and activism, I love making it accessible to people of all ages through the humour and familiarity of a good, old-fashioned colouring book.

I want to provide media examples of real life: something other than the hyper-masculinity, hyper-femininity and compulsory heterosexuality that the mainstream media bombards us with. I want people to be proud of themselves. 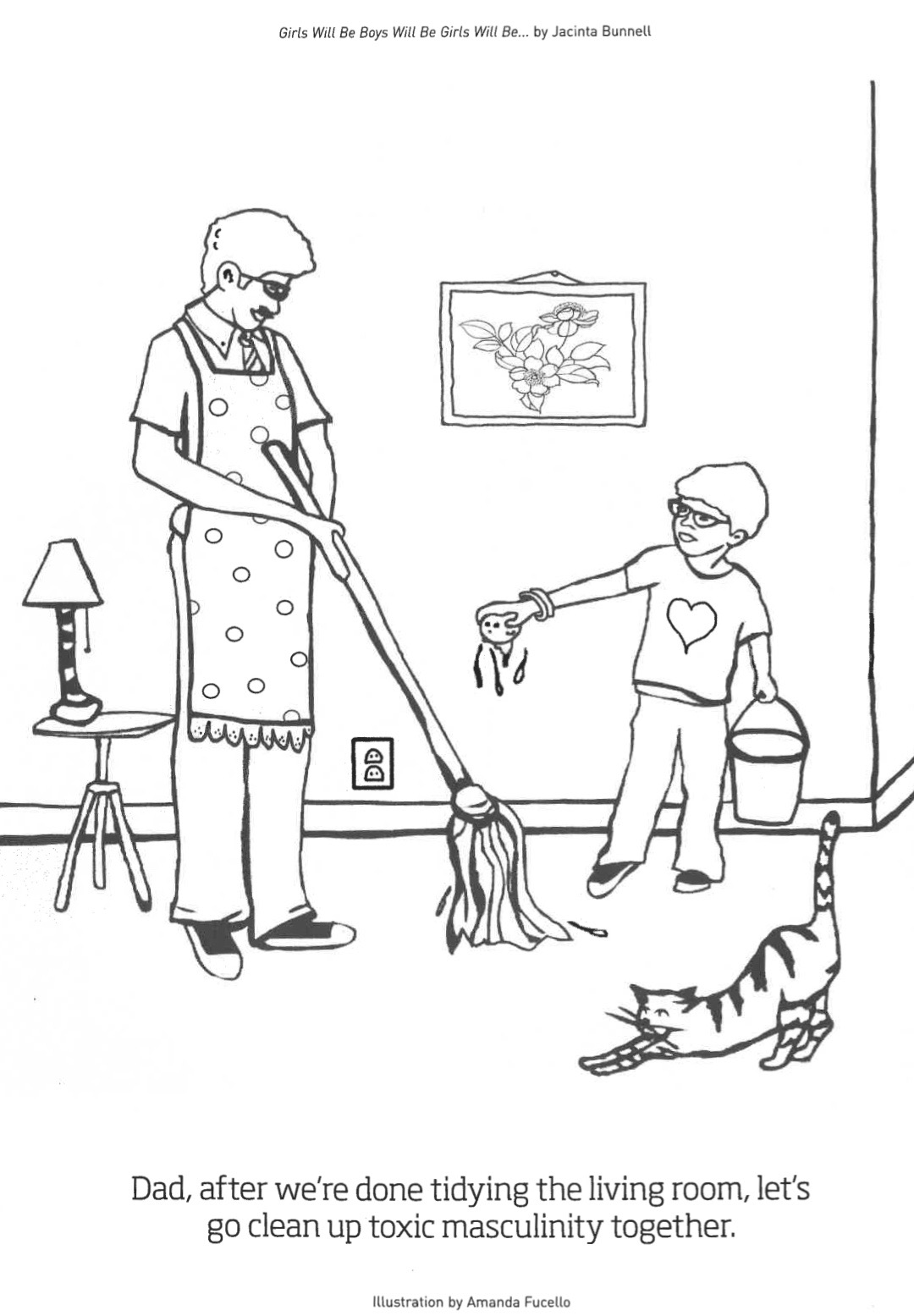 What are some of the biggest influences/ experiences that have shaped your motivations for the colouring books?

I loved The Cunt Coloring Book by Tee Corinne from the moment it was gifted to me by my friend Amanda. That and Kate Bornstein’s My Gender Workbook were the greatest influences for my colouring books. On the flip side, I was very motivated by Disney, Mother Goose, Dr. Seuss, and the whole wide swath of mainstream, go-to children’s media. The frequent presence of micro-aggressions toward queer people and women within them made me want to fight back with something more positive. I have been in a life-long argument with Walt Disney! 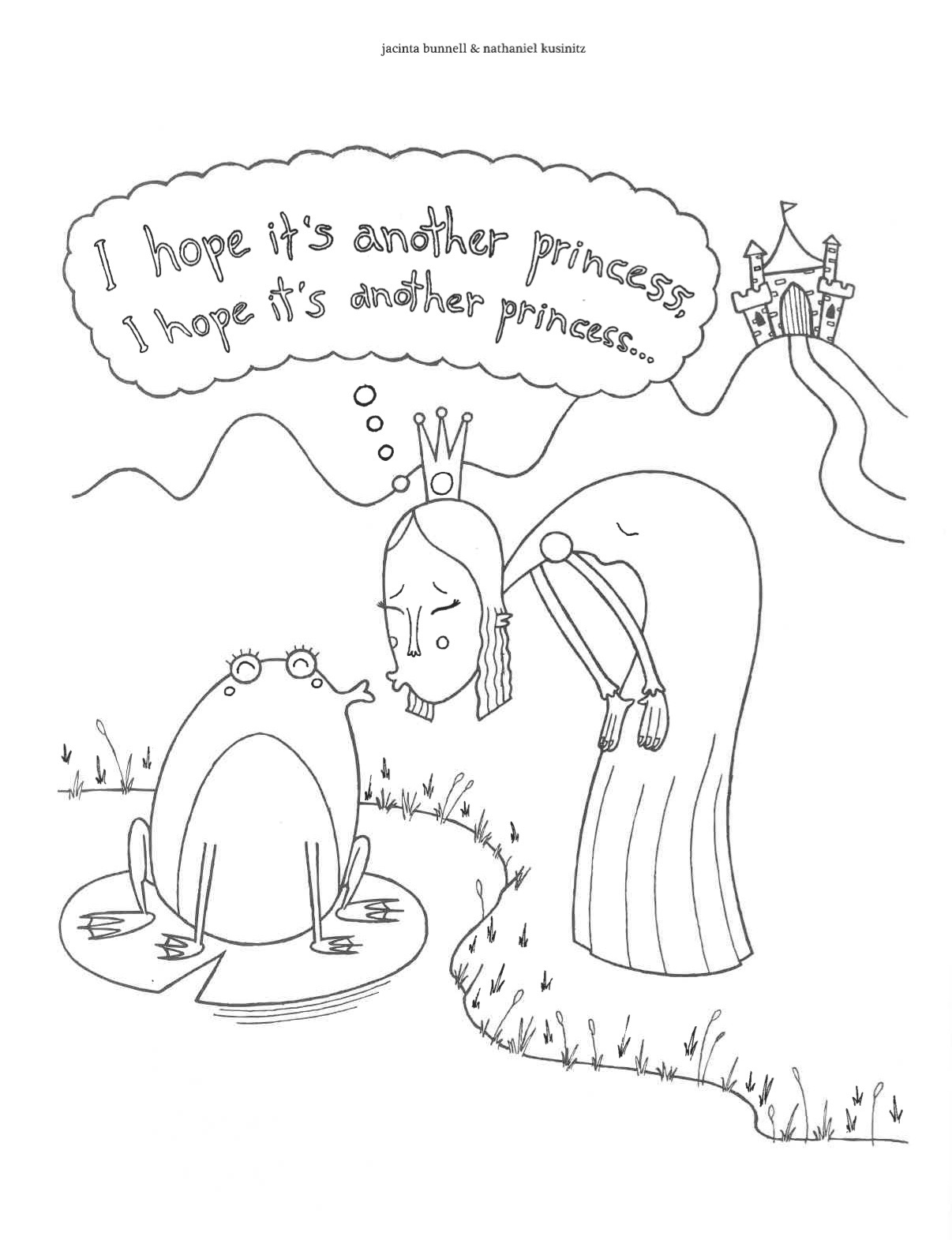 You have an academic background in gender studies – can you tell us a bit more about how this informs your process?

I grew up in a small town. I am proud of and adore my working class roots. But there are some things that troubled me and I didn’t know how to put voice to them. No one spoke of feminism, gender fluidity, gender-based violence, racism or sexual orientation in my town, unless it were in a crude, mean-spirited way. Boys who did not present themselves in typically male ways were tied to trees by football players. Awful stuff. I had to wait until I moved away from there to learn about so many things.

I woke up to issues of the environment, classism, racism, homophobia and sexism when I got to college at age 17. I was a philosophy major and religious studies minor who consistently sought out every bit of writing I could find that was by, for and about queer people and women. I got involved in campus activism where for the first time, I experienced sustained communal work toward change and saw how that work affected real transformation, not just in individuals, but in institutions, curriculum and support services for students and staff.

The language invented in the halls of academia helps us push conversations forward in a way I am grateful for, but it is so often inaccessible to other people and leaves them feeling pushed to the outskirts, angry, confused and deflated.

An important aspect of your work seems to be representation; that young children will finally be able to see themselves in books rather than only being exposed to a heteronormative Disney portrayal of what is ‘normal’. Would you say that this is a driving force in your work?

Absolutely! I heard an interview with a marine biologist recently that reminded me of how important representation is. She talked about going to a concert and seeing an image of a squid for the first time on a t-shirt being sold by a band she loved. In one instant, it sent her down a pathway to learning about sea creatures and the ocean. Now she is a scientist who is helping us understand climate change. You have to trust that by putting new media out there for people to engage with and fall in love with, you are influencing the future in some way.

There is a canon of children’s stories that many of us have come to rely on as “our” stories for children.

In Disney films, females are classically portrayed as hapless, helpless, sexualized, weak humans who have to be rescued by birds, mice, deer, fish, fairies, elves, etc. 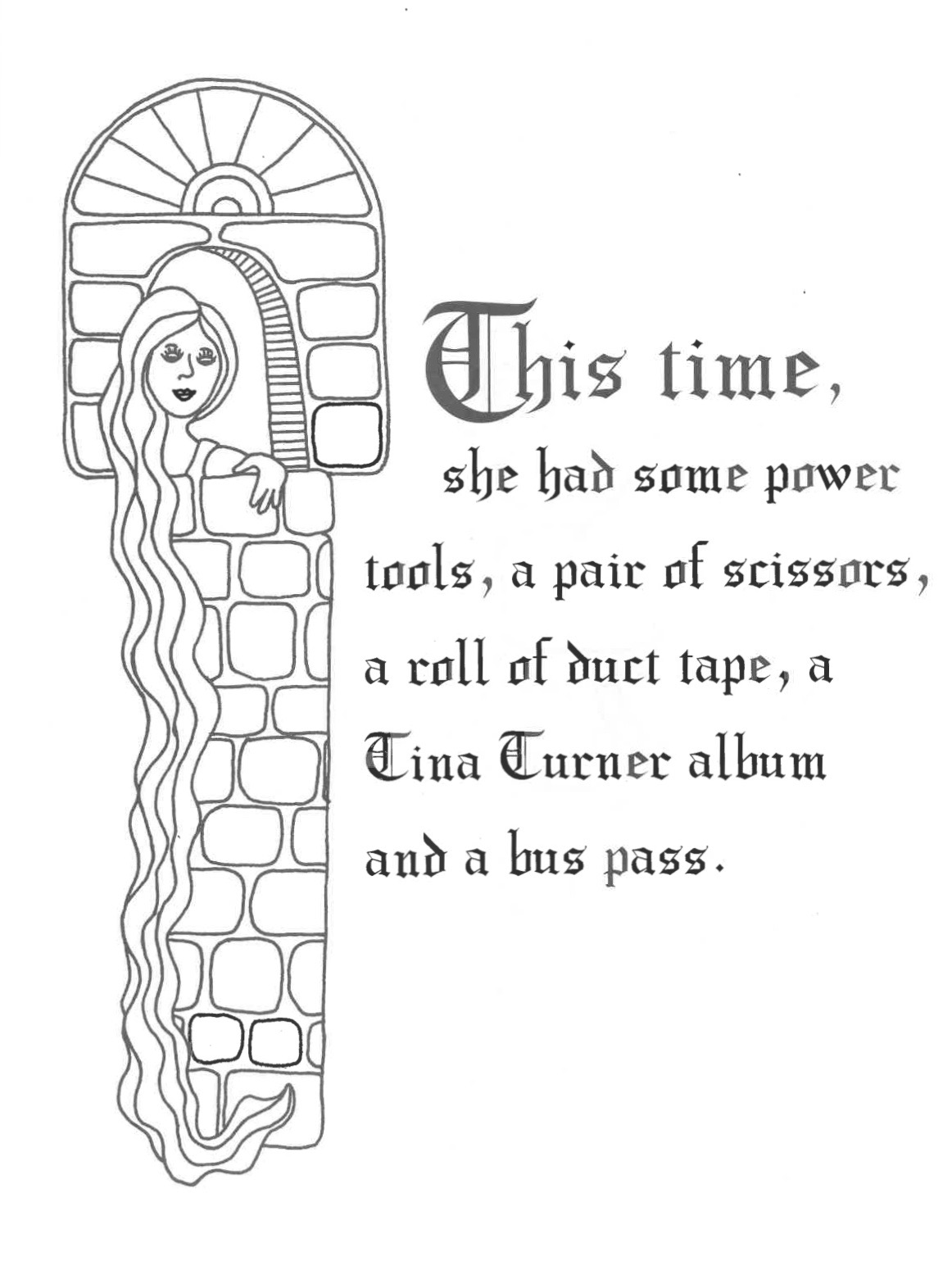 In Dr. Seuss, females are nearly non-existent, or the ten percent that do exist are portrayed in a negative light. In fairy tales, women are often battered, killed, raped or tortured. Many of these stories portray females as untrustworthy, backstabbing, or nagging. And don’t get me started on Peter, Peter Pumpkin Eater! Nursery rhymes are not much better: females are usually described as pretty and helpless. There is so much more to a human being than that. There is cleverness, courage, adventure, zest, intelligence, love, inspiration, boldness, and the ability to bring joy to the world. These are all inherently female, male and gender fluid characteristics.

Why do you think it is important to look at seemingly ‘complex’ topics of gender and identity through a child’s lens?

I think we haven’t given children enough credit when it comes to their understanding of what we perceive as exclusively the adult world. If you look back on your own childhood, you were taking it all in, calculating what it meant to be an adult and what gender meant. You listened intently to what adults were saying and put it in a sort of file cabinet of your brain that informed your decisions about who to be and how to act. Children are witnessing this complexity all day long. Why not give them something that is just for them, that spells out another beautiful way to be and gives them something that could lead to questions they could ask trusted caregivers and parents? 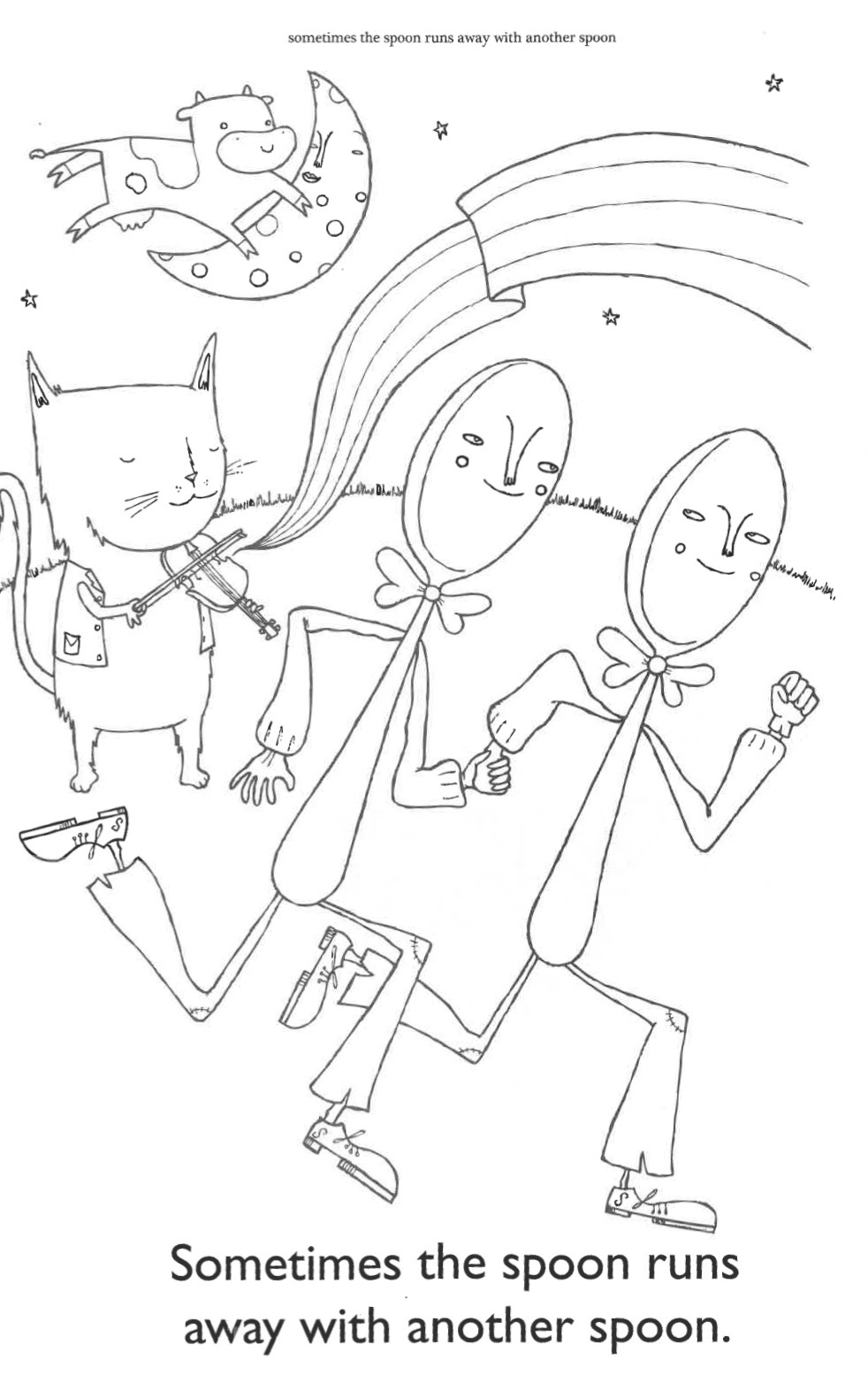 While these colouring books are for all ages, how do you hope they will empower young children specifically?

If you don’t see yourself in popular media, how will you know that the way that you think, feel, dress, build family, and love is normal?

At what age do you think these gender stereotypes first start to cement themselves and what are the biggest problems/ most worrying examples you’ve seen from young children with regards to this?

At what age? In utero! What is the first question people ask to a pregnant person? “Do you know what you’re having?” as if that is the most important thing in the world. Think of all the comments and questions posed to new parents. “It must be a boy, he is kicking so hard,” “Those eyelashes are wasted on a boy,” gender reveal cakes, blue is for boys, pink bows to let you know this is a baby girl, etc. 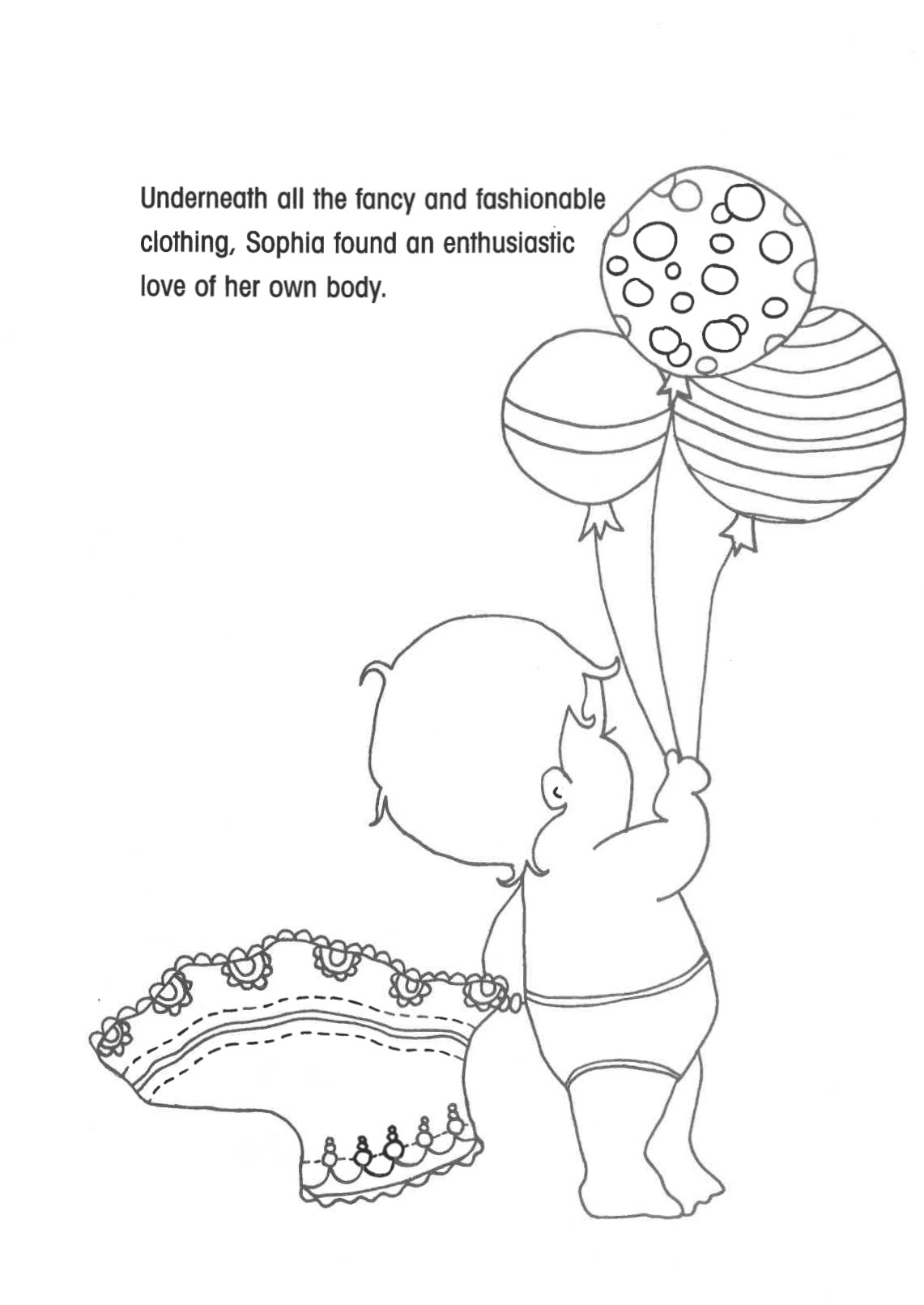 Do you have any influences or inspirations within the LGBTQI community who are working to dismantle these gender stereotypes through arts?

My friend Ahmad is always doing something unique musically.

I have the blessing of helping to raise my niece, who is an actor. Getting to experience new batches of their and their friend’s work on stage and in film has been inspiring. I am always learning something new.

I have loved the work of Maeve End since the moment I met her at a farm benefit in a barn. She was playing songs that seemingly jumped from the pages of my books. 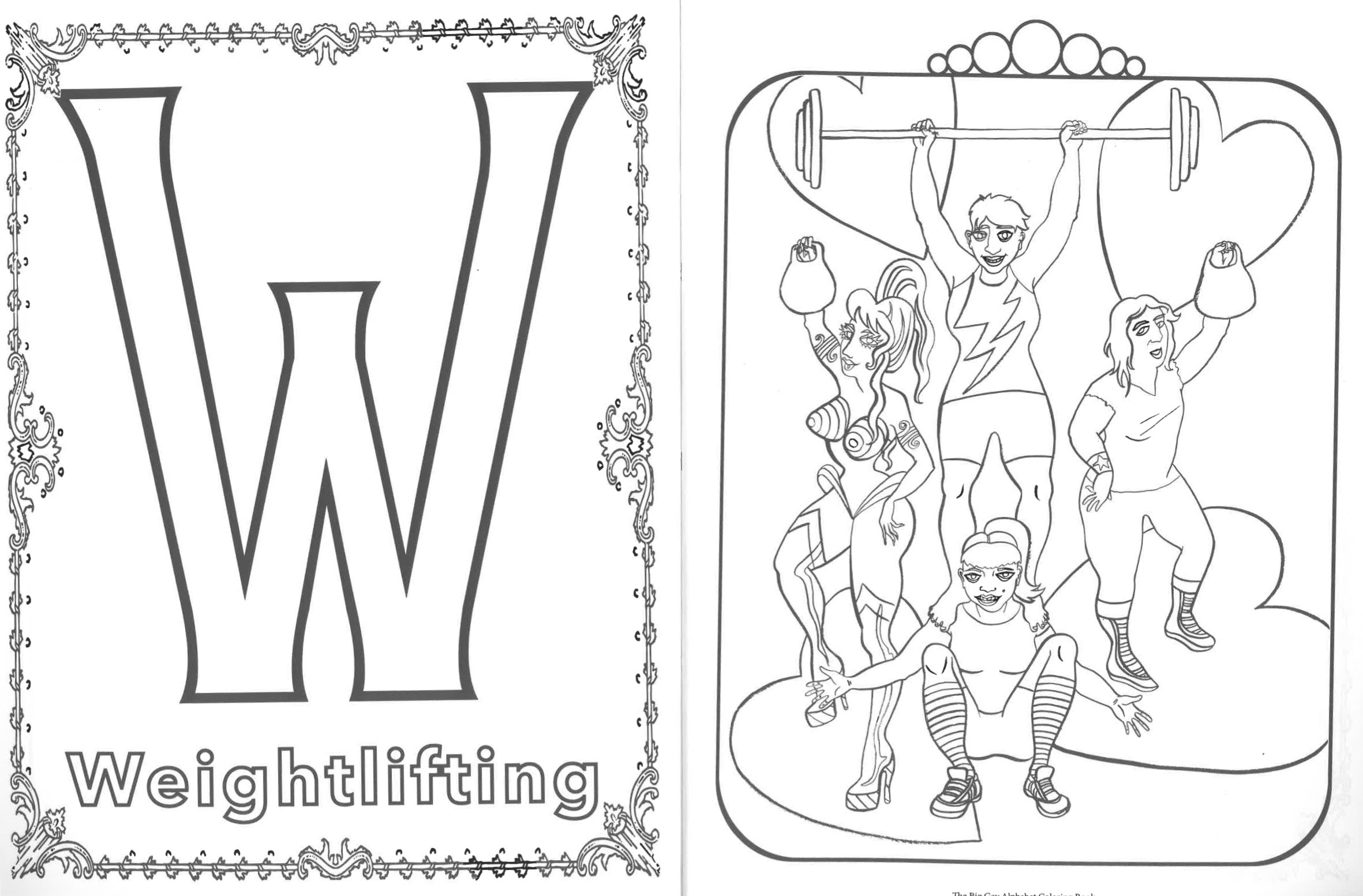 With so many gender stereotypes entrenched in the institutions and brands around us, what more can be done on an individual level, from parents and carers, to break down these gender stereotypes and support their children to grow up in a more inclusive environment?

Question everything. Talk about everything you see on billboards and TV with the kids you know.

If you are a media maker, think about family structures. Not every animal in every children’s book should be a HE! Not every family should be based around a white heterosexual couple.

I try to infuse all of my books with humour. Humour is a useful tool in bringing people together, despite divergent world-views. We can help people absorb the vastness of a problem if they are not on the defence from an attack. Once you have opened someone’s heart with a joke, a shared smile or a good laugh, you are better able to do the hard work of liberation together. Playfulness can be a terrific way to remove the armour we all walk around with. 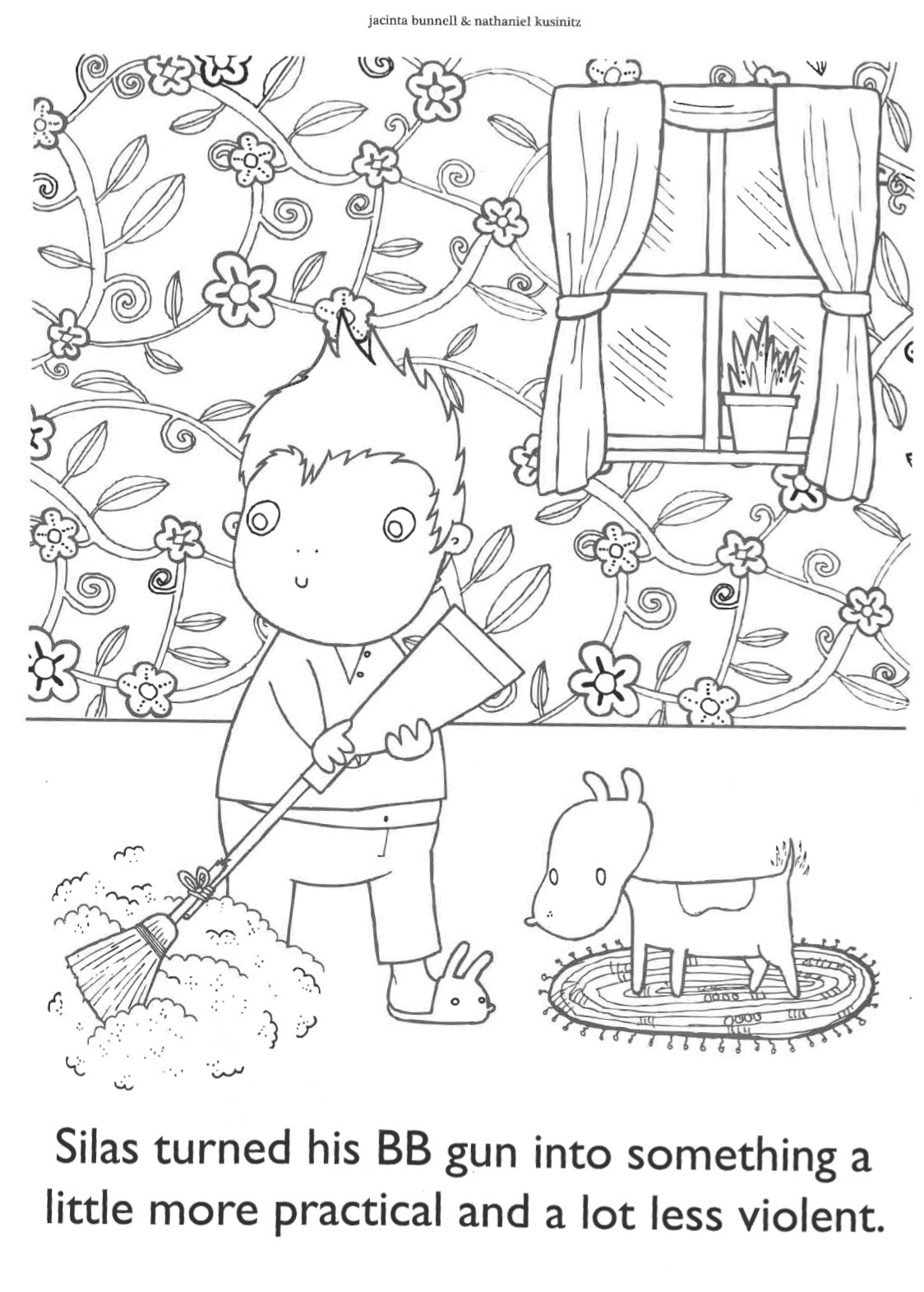 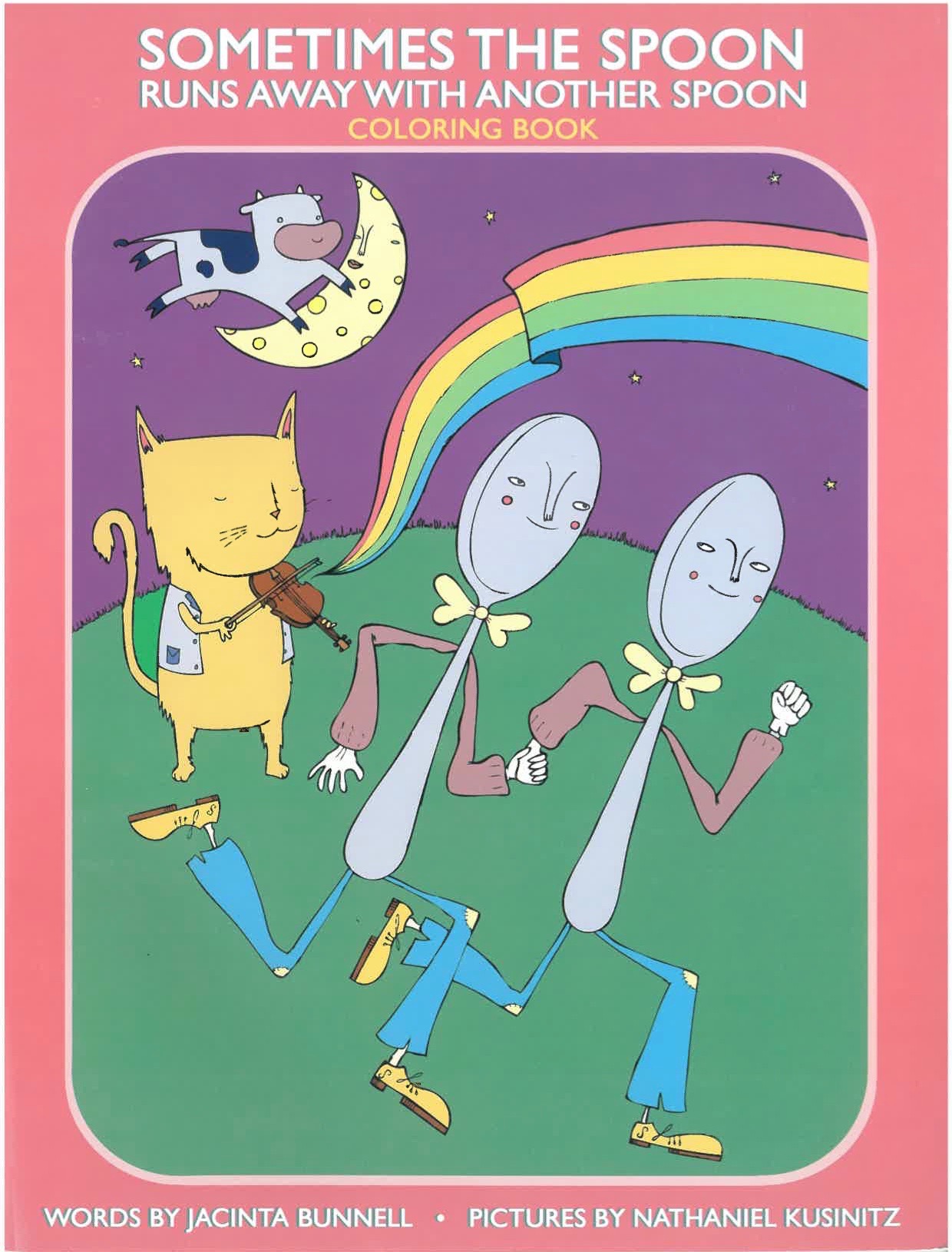