It’s the end of the world as we know it, and I don’t feel fine: Overcoming eco-anxiety and eco-phobia

When I began an Environmental Studies and Sustainability degree, it should have come with a complementary therapist. I was 18 and heading off to college when I realised caring about the planet was the only thing I could imagine doing for my entire life. Despite my eagerness, there was nothing preparing me for what I would learn.

Throughout the degree I was exposed to the multitudes of ways humans have irreparably harmed the planet, exploited cultures and patched up systemic problems with token solutions. In every facet of our life, exploitation and destruction are following our decisions like a shadow. I learned that the climate crisis is virtually inescapable. From the clothes on our back, to the food in our fridge, the climate crisis is the result of numerous broken systems, adding up to a monumental problem.

If this makes you feel stressed, anxious, afraid, depressed, overwhelmed, grief-stricken, helpless or powerless, you’re not alone. It wasn’t until my senior year of college that I found the language I needed to engage with these feelings. The phenomena has been named eco-anxiety: extreme worry about current and future harm to the environment caused by human activity and climate change. Eco-phobia has also emerged into our wider lexicon: feelings of powerlessness to stop environmental catastrophe. It turns out I wasn’t the only one feeling this way. In 2019 alone, Oxford Language reported a 4,290% increase in the use of the word ‘eco-anxiety’, highlighting the growing concern, especially among young people, of addressing the mental health impact of climate change. This increase in usage was due, at least in part, to pages like r/Collapse on social media forum Reddit, which hosts 216,000 members that openly discuss ecological and societal collapse. All contributing to an echo chamber providing bleak visions of the future, and I was one of them.

During my senior year of college, I began to research climate anxiety on my own with hopes of making a zine that addressed these concepts. It was through this that I found Clover Hogan and her organisation Force of Nature – a non-profit that exists to help young people around the world step up, rather than shut down, in the face of the climate crisis. I reached out to her shortly after and we’ve been working together ever since. Now, as a leader at Force of Nature, I’ve gotten to help find and create more positive outlets for these kinds of conversations. Despite our call-to-action ethos, discussions around mental health are still at the core of what we do. In the first month or so of running an online workshop and working with young people from all corners of the world, I’ve seen a wide range of emotional and psychological responses to this crisis. Eco-anxiety and eco-phobia are some of the most common.

Force of Nature helps young people realise that their eco-anxiety is a perfectly natural, human response to this crisis. Indeed, many psychologists would argue that more people should be eco-anxious – because to not feel anxious is to be numb to the problems, which is why we’re in this mess in the first place. On the other hand, eco-phobia, our emotional shutdown in the face of climate change, is what we seek to remedy and see as a problem that is tantamount to the climate crisis.

Growing up in Michigan, climate change was subtle. It didn’t look like drought, famine or wildfires: it looked like reading about all of those things. For many others, it’s a similar story of climate privilege. However, there are young people around the world already experiencing the impacts of a changing climate – and a centuries-long history of exploitation. Particularly in the Global South, rising sea levels, severe weather events, and climate migrations are already taking place and uprooting hundreds of thousands of lives. People experiencing these impacts do not have the privilege to be complacent; they have to take action to survive.

Eco-phobia, feelings of powerlessness and the subsequent “shut down”, thrives in regions where climate change can still be imagined, rather than experienced. It exists in a psychological grey area between “fight and flight”, best described as “freeze”, or even “fib”: a denial that the threat is even worth worrying about. But the need, and often our desire, to take action has not gone anywhere.

Eco-phobia might manifest as: nihilism (the belief that nothing matters), severe depression, suicidal thoughts, complacency, the belief that the system is too broken to fix, or that you’re too small to make a difference, and any number of ideas along that same vein. In environmental education, productive and meaningful ways to cope with the climate crisis are not generally part of the curriculum. Cultural narratives emphasising the importance of the natural world and community are up against narratives of consumerism and capitalism, and they very quickly clash. The lack of education and conversation around mental health’s relationship to climate change has led us into this space of inactivity, or even deniability, where people stop trying to fight climate change before really ever getting started. Becoming familiar with, then eventually overcoming, eco-phobia is critical to driving new initiatives and movements, and inspiring the young people that have had this world and its numerous problems thrust upon them.

While eco-anxiety might actually be considered a positive force, since it wakes us up to the issues, eco-phobia has the opposite effect – it shuts us down. This is why our strategy at Force of Nature is to first befriend these feelings, before metabolising them into the energy we need to act.

Our Theory of Change

At Force of Nature, we work with young, aspiring activists that have come across eco-anxiety and eco-phobia in their own lives and are uncertain of where to go next. The climate crisis regularly makes the front page and leaves people wondering, “well, what can I do?”, especially with young people that are attempting to map out a future that they’re not sure will exist. These emotions and concerns are legitimate, and one of the first steps to using them as our call to action is acknowledging them and allowing them to exist. It is essential to create the space for people experiencing eco-anxiety, and subsequently eco-phobia, to fully experience and understand their inner emotional landscapes.

When you feel anger and rage while watching videos of rainforests being demolished, or when you feel sadness and grief after seeing pictures of climate refugees that have to flee injustice, those emotions are not something to turn away from. In fact, that clear sense of knowing right from wrong, and the emotions experienced, is what compels us to act. They need to be present.

While these problems may seem unsolvable, when we pick apart the individual components of climate change, like Project Drawdown (a mission to help the world reach the point when levels of greenhouse gases in the atmosphere stop climbing and start to steadily decline)has done, it’s apparent that there are no shortage of issues to work on. We only have to look at a list of non-profits or environmental initiatives to see how many people have already set out to change the world, and how many have succeeded. Think of the countless activists that have lived before us and live with us, the global rise of #MeToo, Black Lives Matter, Extinction Rebellion, and more, that all began with a focus. Our power as individuals is rooted in focus, but when we have to compete with constant stimuli and awareness of any number of issues, this is no small challenge.

We live in a world that asks, “what do you want to do?” rather than, “what problem do you want to solve?”, to our detriment. By finding our focus through whatever trial-and-error and self exploration is required, we can solidify the part that we will play in making the world a better place. While you might not be the one who creates infrastructure that withstands tsunamis, ensures the rich get taxed a righteous amount, or develops the newest green energy technology, you will be working toward creating a better world in the ways best suited for you.

We end our “Anxiety to Agency” workshop with a visualisation exercise, asking participants to imagine the world with their one specific issue solved (some solutions that we’ve heard include: developing community gardens in food deserts, addressing electronic waste and creating captivating graphics for political movements).

In allowing ourselves to imagine a better future, one that exists because of what we’ve contributed, we allow ourselves to begin working towards it and figuring out how we will show up to help create it. Without imagining the world we want to live in, or that we want future generations to experience, we have nothing to work toward. It takes permission, acceptance and a bit of creativity, but it is a key part of what inspires activists around the world to do their work.

The challenges of sustaining human civilisation, as well as our planet’s biological processes, cannot be understated and many areas of the world are already experiencing severe impacts. Right now is truly the best time to set out and change the world. In acknowledging and allowing our emotions, we can learn to harness them and take action. In creating change inside, we can create change outside. In finding our focus and visualising the world we wish to live in, we can begin taking the steps we need to get there.

The power of Nigeria’s youth has been proven: it’s now time to get them into office

The case for nationalising Amazon

A colonial hang-up: how the need to speak English is gatekeeping the climate movement 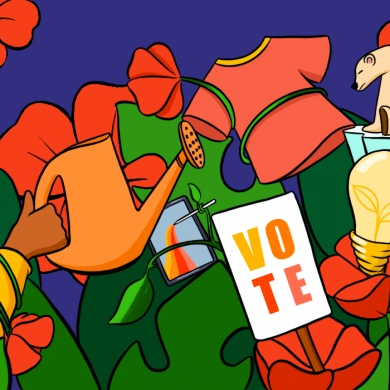