In conversation with Ellen Miles (aka Octavia Chill)

The cottage-core crime which fights land injustice, inequality, nature deprivation, environmental degradation and the mental health crisis: guerrilla gardening. I spoke with Ellen Miles AKA Octavia Chill, a TikTok sensation and founder of the Dream Green platform, bringing guerrilla gardening back in a big way.

I first stumbled across “Octavia Chill” on TikTok last summer. I was mindlessly lockdown scrolling and found myself watching her demo on creating your own seed bombs. The process included blending up scraps of paper with water, smushing them together with local wildflower seeds and drying them out into colourful, golf-ball sized “weapons in the arsenal against  grey lifeless concrete streets” designed to chuck all over the local area. I’d never seen anything like it, and ended up watching her entire series of videos about the guerrilla gardening adventure she undertook to transform her street.

“Guerrilla gardening is grassroots planting in a public place with a purpose,” Octavia tells me, a definition she had been mulling over on the train that day. “There’s a definition by Richard Reynolds who was a prominent guerrilla gardener around fifteen years ago, who says it’s ‘illicit cultivation of someone else’s property without permission’, but I think this brings a whole negative ring to it.”

“For me, it doesn’t capture what the main aim of guerrilla gardening is: that it has a purpose. And that purpose is land justice, community, biodiversity, cleaner air, and better mental health.”

Guerrilla gardening has a rich history stretching back to the 1600s, where a group of Protestant radicals known as The Diggers would illegally cultivate common land to tackle food shortages in pursuit of agrarian socialism and fight rampant land privatisation. It’s not just about planting flowers but has been used as a radical anarchist organising tactic. It is the act of gardening on land that you don’t have the legal right to cultivate, and through this process you make spaces greener with a purpose of reclaiming land to benefit the community.

“92% of British land is not accessible to the public, and 50% of land in the UK is owned by 1% of the population,” Octavia explains to me. “We used to have common land, where people were free to graze animals, collect firewood, and gradually over the years it got taken by the nobles, and now 1 in 8 British homes don’t have gardens. And that is four times higher for Black households.”

“We are stuck in a system where we have to  buy all our food from supermarkets, making us dependent on capitalism to sustain our most basic needs.”

“This idea of ownership of land is so ridiculous. Guerrilla gardening is just about taking back what is ours, and using space in ways which are productive, fair and beneficial to the people and the planet, rather than being just low maintenance areas for councils to neglect.”

The stark inequities that arise from lack of access to land have only heightened during the COVID-19 crisis. Octavia describes how her passion for guerrilla gardening began “when lockdown happened and they started shutting down the parks in lower-income areas, and areas with a higher proportion of Black, minority and ethnic residents, like Brockwell park and Victoria Park, both in boroughs where over a third of residents are living in poverty… And then in comparison you saw places like St James’s park and Richmond park remaining open. So it’s all very well our government saying #stayathome, but your large home with a garden is very different from someone who’s up on the 14th floor with no access to green outside space… and now you’re saying they can’t walk in their local park?”

“It basically triggered this stuff which had been incubating in my mind for a while: access to green space for everyone should be a right and not a luxury.”

In the UK, house prices are so obscene that access to a garden is synonymous with privilege. But as Octavia rightly points out, access to nature is not only a fundamental right but a necessity for our health. Nature deprivation can result in increased mental health issues like depression, ADHD and anxiety, alongside reduced immune system health and effects of air pollution such as asthma.

“Our species evolved over millennia in symbiotic harmony with our wild surroundings, we needed to feed off them to survive. We evolved to feel safe, rest and digest in green, leafy environments. Our natural habitat today is the city – by 2060, 69% of the world will live in cities. In the last 0.01% of human history we have invented technologies and adopted ways of life that seem to grant us ‘independence from nature’ – but our genes haven’t caught up to function this way. Evolution can’t happen as fast as our society has changed to remove us from our natural habitat.. Away from nature your mental and physical health is  suffering in ways you may not even realise.”

“Mental illnesses are 40% more prevalent in urban areas. Life expectancy is one and half years shorter for women and two for men in cities. Nature deprivation is a catch all phrase for these very tangible impacts.”

A report from Friends of the Earth concluded roughly 11 million people in the UK are nature deprived, which equates to about one-third of the urban population. And as Octavia underlines repeatedly, this is impacting Black and working class communities the most.

Octavia initially started with launching the campaign #natureisahumanright to raise awareness of these issues, but found pursuing the entirely legal avenues of making cities greener, such as petitions and working with councils, was getting her nowhere. “I was just constantly waiting for other people to get back to me and everyone was saying ‘great idea’ but not actually doing anything. So I was like ‘fuck it I need to do something that is going to make a difference – if no one else is going to start greening our cities, I’ll do it myself’.”

“All the threads started coming together when I realised guerrilla gardening was something that I was excited by, would make a tangible impact and wasn’t being talked about enough. So I just started doing it, went onto TikTok, made like two videos and the second one went viral.”

In March 2021, Octavia launched the Dream Green platform ‘to empower and educate people on GG, packed with free guides on how to use the right plants, how to raise funding and how to organise a community. We have starter kits for sale to take away the stress of trying to source everything ethically,” she explains, packing seeds into brown recyclable parcels as we chat.

She tells me all about the little neglected patches of soil on her road, which she has lovingly tended into thriving ecosystems despite having no prior experience in gardening. “I want to let people know it’s really not hard. Dream Green is there to get everyone going, give a checklist that they need to get started and break everything down in simple how-to’s.”

“We’re all desperately looking for good ways to benefit our communities long term and campaigning isn’t for everyone”. And now, you can order your own seed bombs of 25 native UK wildflower species and reclaim the neglected areas of your local cities.

“Guerrilla gardening is not only a way to make cities greener and local areas a little better, but also provoke conversation around the need for just that. It’s an act of peaceful protest which highlights the issue of nature deprivation and deep injustices of land ownership while also working to fight it.”

It’s time we started questioning, what would our areas actually look like if they met the needs of the people who live there? What would our cities look like as thriving ecosystems with us as its carers? Who owns this land I’m walking on, and do they care about the planet? Guerilla Gardening offers a way to start answering those questions NOW, by getting out there and doing it ourselves. I invite everyone to make a little pack of seed bombs (it’s so easy I promise) and start taking back our cities.

Nature is a Human Right: Why We’re Fighting for Green in a Grey World, edited by Ellen Miles, is an anthology of original essays from world-leading activists, scientists and writers calling to make contact with nature a recognised human right, and will be published February 2022.

The opportunity to make amends: when accountability gets complicated

The hope of Solarpunk 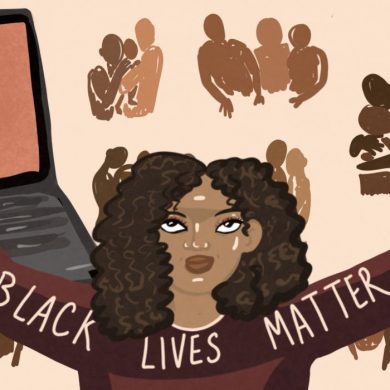