Channeling climate justice in the fight for Belarus’ soul

Mass protests in Belarus have been ongoing since Alexander Lukashenko, the former Soviet Republic’s president for the past 26 years, won a widely contested victory back on  August 9th. Huge crowds of demonstrators erupted across the landlocked Eastern European country, issuing a range of demands starting with the resignation of the authoritarian leader and a fair re-run of the election, which activists and other organisations have denounced as rigged and untransparent.

As Lukashenko still resists the pressure from large swathes of the public, masses of workers and students alike have gone on strike, leaving some key industries running temporarily on a skeleton staff. Lukashenko has not given an inch to the protestors, instead opting to employ brutal suppression tactics, making heavy use of troops, stun grenades, water cannons and mass arrests to attempt to squash the dissent.

While the media has focused on Lukashenko’s reaction, one key issue which has been left out of the discourse surrounding this political crisis is the environmental concerns of the country. The Belarusian state has not traditionally been sympathetic to ecological demands, often choosing to demonise those fighting against the ‘existential climate disaster’. In the recent past, anti-nuclear campaigners have been harassed by authorities, as well as more recent and alarming reports of environmental journalist Nasta Zakharevich being suddenly detained by plainclothes authorities. The targeting of environmental activists this year in particular has been no accident – some of the key organisers on the issue of climate justice are also involved with questioning the summer election results. The overlap is one of a shared goal – transforming society to reflect more progressive aims and a sustainable future.

Activist Maria Suma, a zero waste specialist at the Centre for Environmental Solutions based in Minsk, has elaborated on the link between ecological activists and the wider protestors. “All activists, including those from the environmental movement, are interested in positive changes in Belarus and its free development,” she articulates, “And many of them are involved in the protest movement to some extent.” In fact, recently some ecological experts and scientists were part of a group of  1,255 people detained for protesting against Lukashenko.

The relationship between the two movements demonstrates some hope of solidarity and interlinking separate actions within the embattled country. Maria adds the caveat that the protest movement is not easily categorisable, as it does not break down into smaller factions and groups. So the overlap with environmental activists is more fluid in this sense, “the [wider] movement does not yet have a specific group or initiative with environmental or climate demands”. As with other burgeoning and growing movements, there is work yet to be done on this front.

The recent state of affairs has been illustrative of Lukashenko’s determination to remain in power. Indeed, the state’s authoritarian crackdown on the protestors has been as relentless as the protests themselves. Although the environmental movement in Belarus has never been huge, environmental activists recognise their struggle is a part of challenging Lukashenko’s 26-year rule, based on his own negligible climate record.

Maria elaborates on this point: “for the Belarusian authorities, environmental issues have never been a priority, and they have been sacrificed whenever possible in favour of economic priorities,” even to the point of ‘ignoring’ obligations under various climate conventions. Maria further outlines that the few positive steps that Belarus has taken, including participation in climate negotiations and concessions such as a move towards solar energy, were carried out to gain trading benefits, or were only largely possible due to international grants. Others have called Belarus’ response to the climate crisis “not sufficient”, although it is a sad reality that this matches the actions of many countries around the globe.

Even beyond economics, Belarus has strategic geopolitical reasons for pursuing environmentally damaging forms of energy, including, most controversially, nuclear power. There is a huge interest in gaining energy independence, as despite energy disputes with its much larger neighbour Russia, Belarus has been described in recent years as “almost totally dependent on Russian oil and gas supplies”. Thus, the nation has undertaken a huge project to construct a nuclear power station on the outskirts of the town Astravets near its Lithuanian border, part of a larger nationalistic trend towards self-sustainment.

Reaction to the construction of this power station, opened on 7th November by Lukashenko himself, has been mixed, with many Belarusians cautiously hoping for economic relief from the project. As with populations of all nations, people are often put in a position where choosing a potentially risky or environmentally damaging option is framed solely in terms of their economic interests. It is an indictment of our global system that the material conditions people find themselves in, largely due to the decisions of the ruling class of their country, leaves them under duress to accept such drastic changes for the faint possibility of a better life.

This nuclear pursuit has got many Belarusians on edge, particularly because of the possibilities and implications for mismanagement or, worse, disaster. The shadow of the 1986 Chernobyl tragedy, which took part in neighbouring Ukraine but had far-reaching consequences into Belarusian land, lingers. The radiation released into the atmosphere was damaging to local populations and the environment alike, with the fallout alarmingly apparent even to this day. This is a key reason why the Belarusian Green Party and other ecological organisations, amongst other politicians, have campaigned against the opening of the power plant at Astravets this year.

Most striking is how environmental organisations tied the possibility for ecological damage to the current political crisis in Belarus. They point out that many military and security forces which would be expected to monitor the site have been deployed to suppress the ongoing protests and demonstrations instead, leaving a potentially catastrophic vacuum. This also applies to response resources, who are similarly swept up by the national upheaval. The protests are not dying down anytime soon, so it is worrying that the maintenance of the nuclear site is not currently one of the highest priorities for the state. Amidst an unprecedented crisis of power and suppression, the launch of this power plant ties into Lukashenko’s insistence on stifling voices and not directly addressing the demands of the protestors nor the warnings of environmental organisations, instead continuing his policy plans regardless.

The nuclear example example illustrates the larger ecological issue in Belarus, namely that the organisations which do exist have limited power due to non-cooperation of the state. The current political crisis has exasperated this issue, with the state becoming more suspicious of ecological bodies in the country, who have traditionally aligned with other forces putting pressure on the Lukashenko regime. The wide-ranging crackdown on dissenters has even expanded to fining one of Minsk’s few vegan cafes, MonkeyFood, whose staff chose to join the national strike in late October.

Due to this relationship between activist organisations and the state, the Belarusian ecological movement is stunted. Maria expands on this, stating that the movement is currently represented by just a few large organisations and other smaller initiatives organised in response to local environmental issues. “There is no sustainable climate movement in Belarus,” she continues, “the state does not encourage the development of local initiatives, sometimes even complicating their implementation.”

But as with the protests, which have been repressed but still hold significant sway across the country, there is some hope for the environmental movement in Belarus. The progress made so far has been mainly achieved due to the growing recognition of the importance of looking after the environment, starting at basic levels such as anti-litter campaigns and even trash-sorting competitions. Awareness of the issue is paramount, even in the current schism.

Belarus’ example shows us that an international movement to tackle climate change is one which will often work in tandem with protestors and demonstrators of many causes. Shared goals have the potential to dwarf minor ideological differences across groups -–wider movements have been forged in times of crisis and political chaos before. There are positive aspects from Belarus which can serve as inspiration, as Maria states: “the situation is changing rapidly and the population is becoming more aware and involved in the environmental movement more actively”. She concludes by warning off despair: “despite the difficult conditions for the development of the movement under the authoritarian regime, the efforts of environmental activists have made great progress in promoting environmental values among the Belarusian people”. May that momentum outlast the current moment. 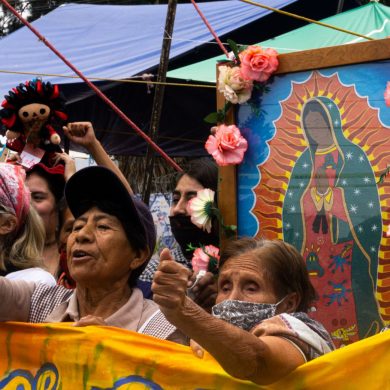