6 Israeli Propaganda Tactics to Be Weary Of

From flashy photo-ops to viral TikTok dances, Israel’s state-sponsored propaganda has been able to reach millions, diverting attention away from their oppressive occupation and exploitation of Palestine towards an overarching false image that portrays the state as a liberal and democratic haven with Western, Judeo-Christian values.

Below are six popular distraction tactics that have misled many into believing, supporting and pushing forward the narrative that absolves Israel of its crimes against humanity.

Pinkwashing occurs when a party uses their tolerance of LGBTQI+ rights to wash over their gross misconduct regarding the violation of numerous other human rights. Although same-sex marriage is not domestically legalised, Israel is considered the safest place to be LGBTQI+ in the Middle East with the community democratically lacking in very little. However, this state-funded image of Israel being a gay safe-haven is considered disingenuous by many due to it being utilised for pro-occupation and anti-Palestinian propaganda. Numerous activists, like Angela Davis, have spoken out against Israel’s use of pinkwashing and erasure of Palestinian queerhood.

Painting over a sixty-three-year long apartheid regime, like all Orientalist structures, pinkwashing leaves out the Oriental: Palestinians who are part of the LGBTQI+ community and allies. And lest we forget, post-enlightenment it was white Western Christian imperialism that systemically introduced homophobic legislation to the colonised Orient, including a substantial part of the region that is now homogeneously considered the “Middle East”.

As Israel boasts making the “desert bloom” by performatively planting trees for photo-ops and to build its own agriculture through settler colonialism, it greenwashes its involvement in the climate crisis. These reforestation red herrings are Israel’s attempt to disguise the fact that 97.7% of its electricity production comes from fossil fuels.

In reality, we see that the occupation forces and settlers routinely burn crop fields, notoriously olive orchards, where acres upon acres of land containing the necessary agriculture for Palestinian livelihoods are destroyed. This begs the question: why do Jewish settlers, who have made it utmost clear that they are descendants of the land who are simply returning thousands of years later, want to see their land burn?

For over two decades, Israel has offered all Jews around the world an all-expenses paid coming-of-age trip to see their homeland in all its glory. At the same time, Palestinian refugees ousted in the Nakba of 1948 and their descendants do not have the right to return to their homeland. Birthright Israel is a ten-day tourist trip that encourages young Jews to reconnect with their homeland and come away with a rose-tinted view of the occupying nation. Many Jewish teens however are speaking out and questioning the palatable whitewashing of their trip where tour guides often refuse to address Palestinian statehood or answer questions regarding Palestinians void of propaganda.

The settler colonial violence we have seen in the neighbourhoods of Sheikh Jarrah, and more recently in Silwan, by foreign Jews is a direct consequence of initiatives like Birthright Israel. The viral video of Muna al-Kurd confronting Jacob Fauci, a Long Island-born settler who proclaimed “if I don’t steal [your home] someone else will”, is a microcosmical portrayal of the colonisation that has been occurring in Palestine since the British Mandate for Palestine to the Balfour Declaration all the way to today where New Yorkers are comfortably stealing Palestinian homes.

Only Democracy in The Middle East

“The only democracy in the Middle East” is a line that has been echoed through pro-Israeli narratives for decades. It is a falsehood, not only because Arab Israelis and East African Jewish immigrants are discriminatorily denied the same democratic rights as their Israeli Jewish counterparts, but because of the imperial hands that have clawed at the Middle East for the past three centuries. The West has sought to destabilise the region and prevent it from ever founding democratic institutions of its own accord.

One of the many examples of the West’s subterfuge would be the overthrowing of Iran’s 35th President, Mohammad Mossadegh, who democratically held office for two years until a coup d’état in 1953 orchestrated by the CIA and  MI6. Considering Israel, a Jewish ethno-state by its own accord, as somehow democratic is by definition and by the Israeli government’s actions inaccurate to say the least. Rather Israel’s ‘democracy’ is just another example of neo-colonial control in  the area. Simply put, any ‘democratic’ ploy is really a chance to control resources, specifically oil reserves.

From Priti Patel to Demi Lovato, celebrities and politicians have been enjoying secret meetings and government-funded trips, covertly and overtly influencing foreign policy and foreign perception of Israel. It speaks volumes about  the state of  British democracy that members of parliament are able to have secret meetings with heads of other states and then are able to return to positions of power like Home Secretary.

After the government’s limp response to petitions signed by hundreds of thousands of Brits asking for the recognition of a Palestinian state and sanctions on Israel due to its breaking of international law during the recent violence, it is clearer than ever that the Conservatives do not have any interest in preventing occupational violence. The UK’s political and economic alliance with Israel is bred by Zionists and Zionist sympathisers who benefit monetarily in the sale of arms and the control of oil through the keeping of an anti-Palestinian and Islamophobic atmosphere.

It is also unsurprising to see celebrities who have performed or vacationed in Israel posting generic calls for peace and gaslighting Palestinians over tweets and Instagram posts by equating the disproportionately aimed violence where 232 Palestinians and 12 Israelis have been killed. Demi Lovato, Rihanna and countless others have proved that they do not have the capacity to differentiate between the oppressed and oppressor, a consequence of consuming propaganda and endorsing an authoritarian state.

Since the involvement of Western Christian Evangelists, the Israeli occupation of Palestine has been painted as a religious culture clash in the Western world. After 9/11, the polarisation between Christianity and Islam gained momentum and since has been peddled at the forefront of the occupation in order to justify the West’s neo-colonial involvement in Israel and the region overall. Palestinians are portrayed as a solely Islamic entity when in fact Palestinian Christians and Jews do exist. It is also blasphemously ironic and antisemitic that Christian Evangelists believe they are helping biblically trigger the Rapture (the Christian apocalypse that begins when Jews reclaim the Holy Land) at the expense of not only Christian Palestinians and other non-Christians but the Jewish population themselves.

This religious lens is a non-productive fallacy that centres around the placement of a white, Eurocentric system of settler-colonisation. It does this in place of  combatting the illegal erasure of Palestinian land and the brutal systemic racism that denies Palestinians almost every human right, from the right to education to clean drinking water to self-determination, deemed necessary to live.

Obedience, Oppression and Capitalism: why we need to address the legacy of schools 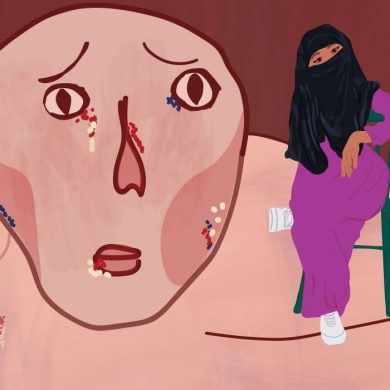 Why is white feminism propping up hijab bans in Europe?