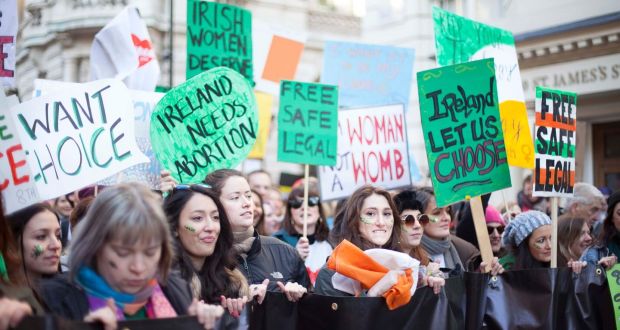 In July 2019, the UK Parliament voted in favour of an amendment proposed by Stella Creasy MP and supported by pro-choice groups across the UK. Section 9 of the Northern Ireland Executive Formation Bill 2019 passed by 332-99 votes in the House of Commons and 182-37 in the House of Lords. Section 9 states that decriminalisation of abortion would take effect if no Executive was formed in Northern Ireland by October 21st.

From midnight tonight, Sections 58 and 59 of the Offences Against the Persons Act 1861 will be repealed. This means that abortion will no longer be a matter for criminal law, instead, abortion will be regulated by medical guidelines like any other healthcare procedure. The prosecution of a mother who procured abortion pills for her 15 year old daughter will be dropped. Women and girls can no longer be criminalised for ordering abortion pills, and are free to seek aftercare from their doctors without fear of being reported to the police.

From tomorrow, anyone who needs an abortion can call 0333 234 2184 and the cost of their abortion, travel to England, and accommodation will be paid for by the British Government. For those who order abortion pills online, they can now seek aftercare from medical professional in Northern Ireland without fear of being reported to the police.

The law also states that Westminster has a duty to introduce regulations which will bring Northern Ireland’s abortion law into line with human rights standards outlined by the recommendations of the United Nations Committee on the Elimination of All Forms of Discrimination Against Women (CEDAW) by 31st March 2020. The fight is not over until these regulations are in place and women and girls in Northern Ireland have real access to free, safe, legal and local abortion.

This year, the London-Irish Abortion Rights Campaign began the process of judicially reviewing the Secretary of State for Northern Ireland for its failure to act within its powers to address the current denial of rights to women and girls in Northern Ireland. We stood ready to challenge the regime which did not comply with the Supreme Court’s ruling and which left women at risk of fundamental breaches of their human rights. In light of the new legislation coming into force, we will now inform the Secretary of State that we will not be proceeding with that case. However, we will be watching the Government closely to make sure that this change in the law translates into proper access to abortion services for women across Northern Ireland. We will not be giving up until and unless that happens.

The London-Irish Abortion Rights Campaign has been campaigning for Westminster to repeal the criminal sanctions on abortion in Northern Ireland and has worked closely with campaigners across Northern Ireland. This is a victory for reproductive rights, for all those who shared their stories and for everyone who called for change over decades.

“Today is a huge victory for women’s rights as Northern Ireland’s cruel abortion ban has been lifted. Abortion will be decriminalised, and women and girls will no longer fear going to prison for accessing basic healthcare.

The London-Irish Abortion Rights Campaign has brought people in London together to campaign for abortion rights across the island of Ireland. We are proud to have campaigned in solidarity with groups in Northern Ireland, Ireland and England. We marched, we protested, we lobbied our MPs, we tweeted, we chanted, we took legal action against the British Government and women spoke out about how the law failed them. Today belongs to everyone who has demanded change.

We are celebrating this milestone and we will continue to fight against any delays to provision of free, safe, legal and local aboriton in Northern Ireland so that noone has to travel for abortion care.”

“Today marks the first step in getting women in northern ireland equal rights with their counterparts in England and Wales. When it comes to being able to make decisions over their own bodies, women and girls in northern ireland will no longer be threatened with the criminal law. The legislation that comes into force tomorrow requires the secretary of state for northern ireland to uphold human rights standards for abortion from start to finish. it is vital that we do not now see any backroom deals in parliament on in the assembly to water down the commitment we made to treat women in Northern Ireland as equals. We will accept no more delays in the regulations governing access. Women in Northern Ireland have waited long enough.”

“This is an historic day for the rights of women and girls in Northern Ireland. At last, abortion will cease to be treated as a criminal matter and we are closer than ever before to safe, legal and free access to abortion services in Northern Ireland. Health providers, campaigners, politicians, lawyers and of course women who shared their stories and took them to the courts came together in refusing to accept the status quo. These reforms are a testament to what can be achieved when people work together across many fronts to demand change.”

“The decriminalisation of abortion marks a momentous victory for women’s rights in Northern Ireland. It is a testament to the years of hard work by campaigners, healthcare professionals, and hundreds of women who have bravely spoken out about the impact of their country’s draconian abortion law. BPAS is proud to have been able to provide abortion care for thousands of women from Northern Ireland in our clinics in England since 1968, but we have always been clear that women must be able to access this care at home.

Following this important legislative change, the Secretary of State must now publish their consultation to begin the process of creating a framework for accessible, fully funded abortion services in Northern Ireland. The government must work alongside medical professionals to develop abortion care that both meets the needs of the women of Northern Ireland and also meets the UK government’s human rights obligations. Policy makers must also consider protections for those who wish to provide and access abortion services, including clinic buffer zones. Medical professionals have operated under one of the strictest abortion laws in the world in Northern Ireland, and guidance and training is needed as a matter of urgency to enable those who wish to provide abortion care to do so.

BPAS will continue to provide a Central Booking Service for women and healthcare professionals seeking to arrange abortion care in England. As of 22nd October 2019, the UK Government will fund all travel and accommodation for all women from Northern Ireland seeking abortion care in England. Any woman considering travelling to England until abortion services are fully established in Northern Ireland should call 0333 234 2184.”

“This is the most seismic change for women and pregnant people in Northern Ireland for generations. Finally we are rid of the British Law that caused so much harm and heartache to multitudes since 1861. Abortion will finally be a healthcare option instead of one beset by multiple legal barriers. We have been using abortion medications safely on our own for over a decade, it was criminalisation put us in danger and medical professionals in a bind. We won’t stop pushing for provision until everyone is able to access the healthcare they deserve.”

“We are thrilled that abortion is finally being decriminalised in Northern Ireland. Since October 2009 Abortion Support Network has been providing support to anyone pregnant and needing to travel to access abortion. We welcome this change, but we know that it may take some time for the women and pregnant people of Northern Ireland to get the free, safe, legal and local abortion provision that they deserve – certainly until March 2020. Until then we’ll be here for anyone who needs us.”

“Free, safe, and legal abortion access on the island of Ireland has been a goal of the abortion rights campaign since our founding in 2012. On 21st of October we move one step closer to making that a reality. The success of the repeal movement last year was made possible with the support and solidarity of our siblings in the North. Northern Ireland is now an outlier for its lack of abortion access, and this situation must now end. We are proud to stand with our siblings in Northern Ireland who deserve access to the same rights as everyone else on this island.”

*Women including trans and non-binary people, and anybody who might become pregnant.

About the London-Irish Abortion Rights Campaign

We bring people in London together to campaign for the free, safe, legal and local abortion access across the island of Ireland. We launched in September 2016, with a march to the Irish embassy to represent the 77 women a week who travel to England from Ireland for abortions. We are now a 1,000 strong, grassroots organisation.