In conversation with Alina la Histérica

Mariachi is a style of music that’s been around since the late 1700s. But in Alina la Histérica’s capable hands, it’s getting a much needed makeover. She’s part of a protest group in Mexico that rewrites letters to popular mariachi, cumbia, and huapango songs in order to create feminist versions that respond directly to the sexism in the original lyrics. These new feminist versions protest the cultural and systemic sexism faced by women every day in Mexico and propose a different way to understand love, rejection and what it means to be “chingón” (a badass). We sat down with her to find out more.

First of all, how are you? What have you been up to today?
I’m feeling calm and relaxed – tranquila, as we would say in Mexico. Just spent part of the morning finishing an assignment for a music class taught my fellow feminist mariachi friend. I had to record myself keeping the beat of a song on my right foot, the accent of it on my left, double-time on my left hand and a conductor’s hand gestures on my right. It was fun, but definitely a struggle. Granted, I am a little less relaxed now, haha.

What does it mean to be “chingón”?

Chingón and chingona are words we use a lot here in Mexico. We can use them to praise someone for being a total badass – “Eres una chingona”, when we want to say something is really fucking cool – “Qué chingón!”, or when we want to be excited about anything in particular, like someone’s new song – “Qué chingona tu canción!” It feels like a very positive word. It’s fun to say.

There’s another less fun side to these words too, though. Chingón and chingona come from the verb chingar, aka – to fuck. So just like someone can be a chingón or chingona (someone who fucks), you can also get fucked “me chingaron”,  and be an asshole, an “hijo de la chingada,” an insult that speaks to your mom getting fucked (note, not your dad). Historically men are the chingones and women are the chingadas. And because of this, it’s pretty cool to call someone a chingona. But, what I really think is cool is the idea of being a badass without having to screw over other people to get on top (no pun intended). I try to explore this idea in my feminist version of “El rey”, which I titled “El wey”.

For those who don’t know how would you describe mariachi, cumbia, and huapango music?
In very broad and general terms… Mariachi music, with its guitar, guitarrón, vihuela, trumpets and violins, is epic, made for singing out loud at the top of your voice, at reunions and in cantinas, tequila in one hand as you cry about your most recent heartbreak, roses in the other as you surprise your love interest with a mariachi band, and wake up all their neighbours. Mariachi musicians have to dress a certain way and carry a certain bravado.

Cumbia, which comes from Colombia, has an unmistakable percussion beat. If you’ve heard it you know what I mean. When I think of cumbia I think of really, really great dancing. It makes you want to move.  And as for huapango – which I’m pretty new to and have a pretty hard time singing – there are a few types, but classic huapango is from a region located partially along the Gulf of Mexico called La Huasteca. It’s very traditional, folkloric music. It follows a particular structure, is improvisational in nature, performed in a trio, and danced to with zapateo – dancers create the music’s percussion with their feet.

What does being a feminist mean to you?
It means so much! For me, feminism is about being free from sexist oppression in all its forms, from the systemic issues which at times seem insurmountable to the most internalised details, like the way I think about my body. It’s something that we can all believe in and think about and perhaps most exciting of all – something that we can practice. Like all good praxis, the way we think about it will shape how we practice it, and the way we practice it will shape how we think about it. As I learned from bell hooks, feminism is for everybody! We can all try to imagine and work towards being free from sexist oppression. And yes, of course, cis men benefit from the patriarchy, but they are also harmed by it. We are all harmed by it.

What power does music have to create change?
Music can create change because people connect with it. Music has this incredible power to make us feel. This can lead to change because feeling things deeply is a way to connect with one another, to empathise with a struggle we may not experience personally and to be moved into action. Music also creates community. It’s incredibly powerful. It’s liberating to create it, to listen to it, to dance to it. It even serves as a form of collective memory, passing down stories of struggle and resistance. It is an incredible force for change.

More specifically, you talk a lot about the problems of cultural and systemic machismos. How do you think music can be used as a form of resistance to this? And how previously has it been used to reinforce these problems?
There’s this great chicken and egg question with music… does our music shape our culture or does our culture shape our music? The answer is clearly both. For this reason, music can both resist machismos and reinforce them. The reason I wanted to change the songs ‘Mátalas’, ‘El rey’, ‘La bikina’, ‘La media vuelta’, and ‘17 años’ is because they all, some to a greater and some to a lesser extent, reinforce certain ideas about love that normalise a kind of violence toward another person, violence that we even sometimes refer to as romantic.

When I first started changing mariachi lyrics, I also started teaching workshops on gender issues at a public middle school. I remember planning a workshop with my co-facilitators and thinking about how we could analyse popular songs in class without making our students feel like we were criticising their favourite music for being sexist. Rather than focusing on the idea of “feminist music” or “sexist music”, which misses the point, we focused on trying to understand what each song was telling us about our culture and society. If someone wrote machismo into their song, we can assume that what they wrote about is probably something many people believe or experience. That’s part of what I really like about rewriting songs. People will often look up the original lyrics and really think about them. Even songs that reinforce our machismos can be used as a tool for understanding our society.

After analysing the original lyrics, my students then wrote their own lyrics. It was so powerful! Creating music that reflects the culture and society we actually believe in and want to be part of is an incredible form of resistance.

How have people responded to your music?
People are really connecting with it, which makes me so happy! I think the possibility of having mariachi, cumbia and huapango songs that directly respond to the things we don’t like about the originals is super exciting for people. I’ve also started a lot of conversations about the original lyrics and why I changed them, which to me is such a great opportunity to talk to people about why feminism is so cool.

I’m sure as word gets out more that I’m doing this, I’ll get many negative responses as well: from people who feel threatened by the lyrics, insulted by the fact that I changed their favourite songs, or people who feel that someone like me shouldn’t be messing with such a traditional, patriotic genre. And hey, that’s a good thing. If people feel this way about my music, then I’m probably doing it right. 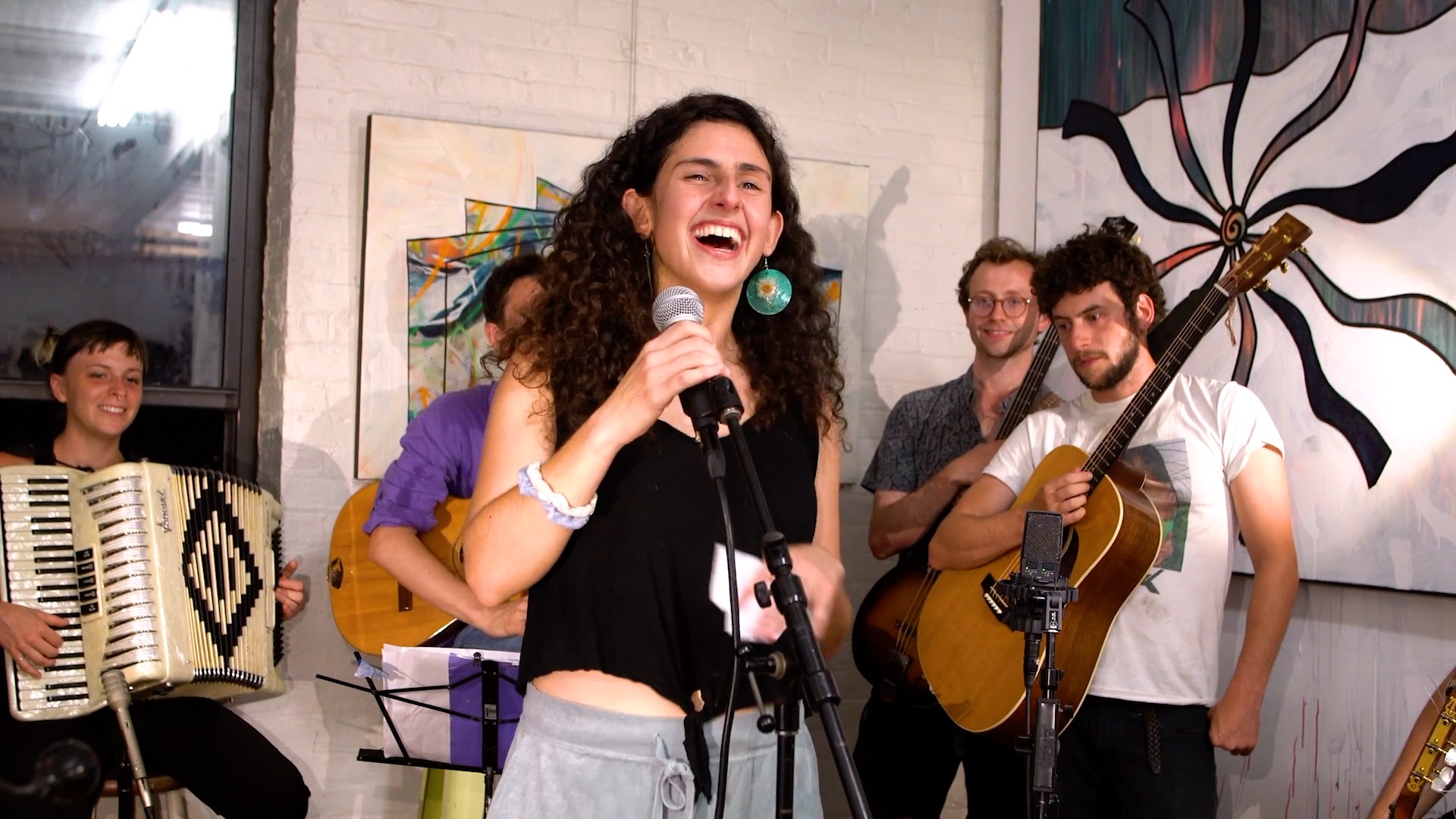 Can you talk a little about the situation for women and gender non-conforming people in Mexico?
The situation in Mexico is dire, which also explains why the feminist resistance here is so beautiful and so strong. Eleven women are murdered everyday just for simply being women. The pay gap is huge, and most women still carry all the responsibilities of non remunerated work at home. Abortion is not legal at the federal level (though we’ve had some recent wins in certain states) and teenage pregnancy is really high. Sex education is not part of the government curriculum and many people don’t have access to contraception. There are still so many assumptions about what a woman can and can’t do, should and shouldn’t do. Even in Mexico City, I do not feel comfortable leaving my house with a tight tank top or a short skirt. I do not feel safe walking alone at night. The oppression is felt.

I love your idea of starting a feminist mariachi band which will perform in traditionally male spaces. Why is it so important to be both visible and taking up space here?
Yes, that’s what I’m most excited about! I can’t wait to perform in spaces like cantinas, which barred women from entering until the 80s, and on public transport, where women are still harassed daily. I think it’s important to take up space here because taking space is a form of power. Even if women or genderqueer, non binary, intersex or trans folk aren’t legally banned from a space, our absence from a certain space is a way of giving up our power. Being present in these spaces is a form of taking this power back.

What’s your favourite song you’ve re-written?
Ah, it’s hard to choose! I can talk about one of my favourites though – Déjalas (formally known as Mátalas). The original starts with the story of a man who sees his friend crying, assumes he must be crying over women and promptly gives him advice on how to win women back: “murdering them with sweetness,” “asphyxiating them with kisses,” and giving them gifts, because as the song mentions, no woman in the world can resist these kinds of details. In my new version, the narrator sees his friend crying and the piece of good advice he gives is to let go. Rejection is hard, but life isn’t like the movies, you can’t convince someone to love you. And why would you want to be with someone who doesn’t love you for you?