A look into the resistance of the Indigenous Totonaco communities from the Sierra Norte of Puebla against transnational mining, fracking and hydroelectric projects, and how they are building new forms of community resilience following the COVID-19 pandemic.

If you want to know how to get rid of mining or hydroelectric projects from your territories, the Totonaco Indigenous communities of the Sierra Norte of Puebla offer a masterclass in how communities can effectively organise to defend their lands and waters against these transnational companies.

The Sierra Norte of Puebla is a lush green mountainous region, home to wild cats, hummingbirds, deers and raccoons. Its humid temperatures mean that coffee, maize, vanilla, lemon crops and sugar cane grow in abundance. Rivers flow through these mountains and are the life stream of the communities that surround them.

However, the mountain is facing what the communities call a ‘cancer’ of transnational ‘projects of death’. Their territories are threatened with 189 mining concessions, 14 hydroelectric dams and various fracking plans that would destroy this paradise that their Totonaco communities have been living in for over 4,000 years.

The Caravan in Defence of Water and Life was received in the heart of this valley of mountains, in the town of Ahuacatlan, to attend the ‘32nd Assembly for the Construction of Life’ organised by the Nahua, Totonaco and Mestizo communities of the region.

We got off the Caravan at the bottom of a hill, and marched up the steep stone-built roads to the centre of the community where hundreds of people from surrounding areas congregated for the assembly. We were greeted with fresh tamales wrapped in plantain leaves and coffee sweetened with their own sugar cane.

The council of elders was present at the assembly, holding big batons and dressed in their traditional clothing, alongside representatives from different communities. A huge banner was hung up in the background that read ‘Water is the blood of the earth. We must defend it!’

At the assembly, communities shared their triumphs against the mega projects in the region, giving updates on the mining and hydroelectric schemes they had halted, as well as sharing their visions of what a world of autonomy looks like and how they are beginning to build it.

Currently none of the fracking projects are running, and all the hydroelectric plans and almost all of the mining concessions have been suspended. The communities have so far kicked out Canadian, Belgian, Italian, Chinese and Mexican transnational companies from their lands. 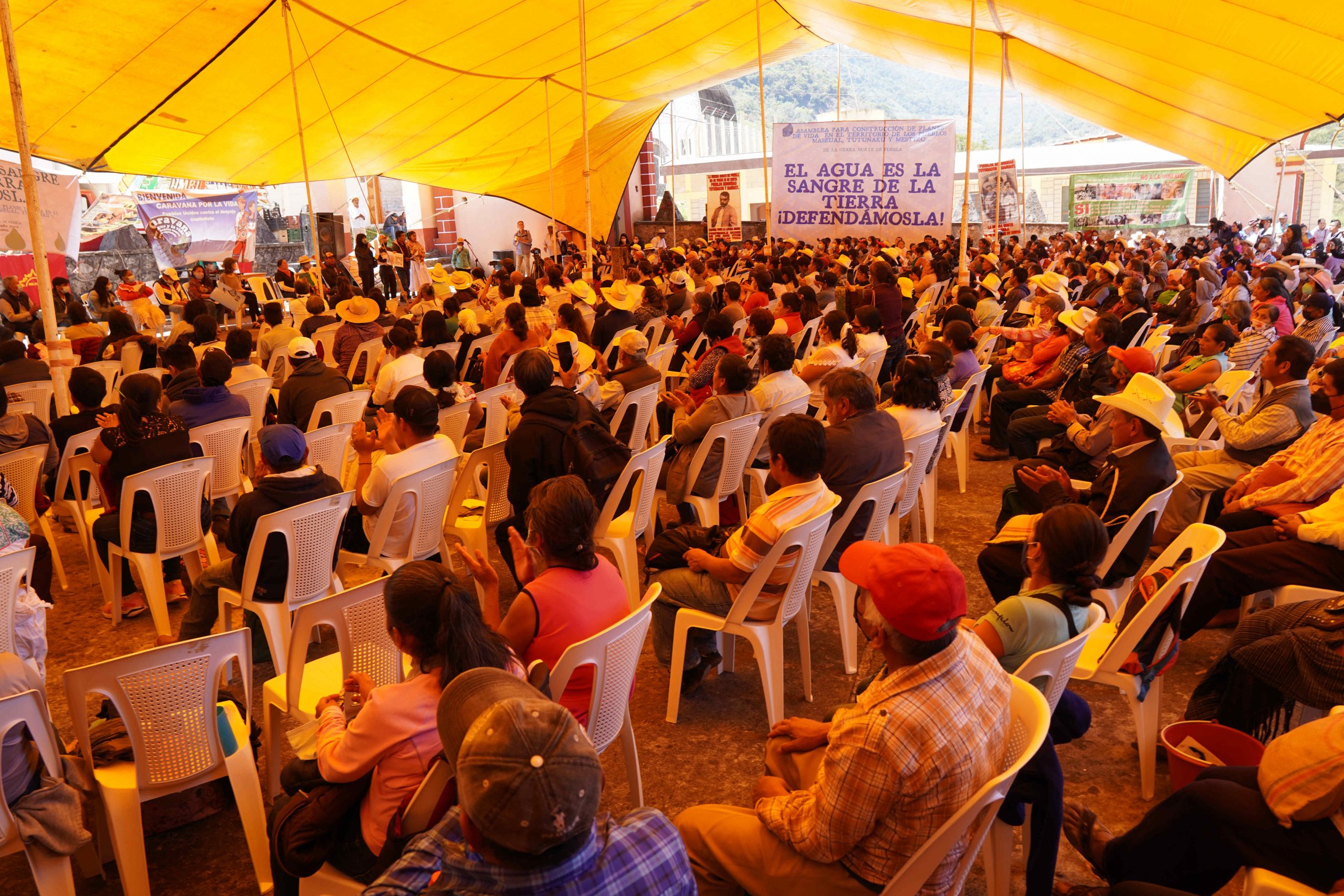 The start of their resistance

Miguel Sanchez Olvera is a very special abuelo or elder in the Totonaco community. His white hair and croaky voice show his age but his laugh and smile are young and full of life.

He explains how his community first woke up to the threat of extractive industries in 2011 when a group of Canadians arrived offering a lot of money to buy their plots of land. The communities felt it was suspicious and declined the money until eventually the Canadians left.

This was the start of many companies coming into their Totonaco territories with the intention of taking their lands, waters and everything under them.

“The company must have thought that if they came further down the river to where our Totonaco communities are that it would be easier for them to get away with their project. They thought that because we were Totonacos, we were idiots and that they could do what they liked with us. But god, were they wrong.”

Miguel explains how around this time a group of people came from another community to share with them what these mega projects would do to their territories.

“The comrades told us that these mega-projects would leave us without water and without land. That’s when our communities really woke up. For Totonaco communities to hear those words was like having a gun pointed at our hearts or a knife held at our necks,” he says. “For our communities, water is life – it is very spiritual for us. Without water, we are nothing. Many of us in our communities don’t know how to read or write but we know how to defend life – so immediately, we began organising ourselves.”

The communities started a four-month-long blockade to stop Grupo Mexico’s digging. The following January, the company and local government held an assembly to supposedly ‘consult’ the communities of the hydroelectric dam.

Miguel tells me: “They came telling us the usual lies… that they would give us roads, a school and a clinic if we agreed. But we stayed strong and declined. The municipal government was very angry at our community. After the assembly they began to burn car tyres and threaten us. They said: ‘you Indians don’t know what progress is’.”

He continues: “But we know that we are nature, that we are part of the Earth, so we stayed strong and rooted in our decision. On 12th October, we organised a protest where we marched with our machetes and sticks raised calling for them to leave. Just a few days later, we got the message that Grupo Mexico had officially declared to leave our communities. We didn’t even celebrate, because we knew it was only the beginning.”

Similar processes of resistance began sparking up across the region.

Other hydroelectric projects were stopped such as the ‘Puebla 1’, developed by Deselec-Comexhidro. The project planned to extract 11,000 litres of water per second for 15 years. All of which would go to big private companies such as Walmart.

The Totonaco communities declared that this project violated their right to free, prior informed consultation under UN article 169. They accused the company and the municipal president of bribing members of the community with $200MXN in exchange for their vote and for threatening to kidnap the children of community organisers.

On the mining front, in Zautla the people held a 500-strong assembly and as a result kicked out workers from a Chinese gold mine called La Lupe and shut it down.

In Tetela de Ocampo, Slim’s company, Frisco, planned to open an open cast gold mine, but thanks to their protests and legal procedures, its plans were rejected.

This year in February and March, after seven years of legal battles, five mining concessions were cancelled in the communities of Ixtacamaxtitlán, Cuetzalan, Tlatlauquitepec and Yaonáhuac. One of which is the Canadian gold-mining company, Almaden Minerals, which has a concession of 14,000 hectares of land. Just two weeks ago another Canadian concession was cancelled.

Miguel stresses that Canadian companies are the biggest offenders. 72% of the mining concessions in the region are Canadian owned.

Miguel emphasises that the legal cases that battle these plans rely heavily on grassroots organising. Community organisers, like himself, go house to house informing communities of their Indigenous and constitutional rights, as well as the impacts that these projects will have on their territories. They know that if people are properly informed they will never agree to these plans in a consultation, making it clear that  positive outcomes  from consultations are usually rigged or fabricated. The legal procedures then look at proving this. 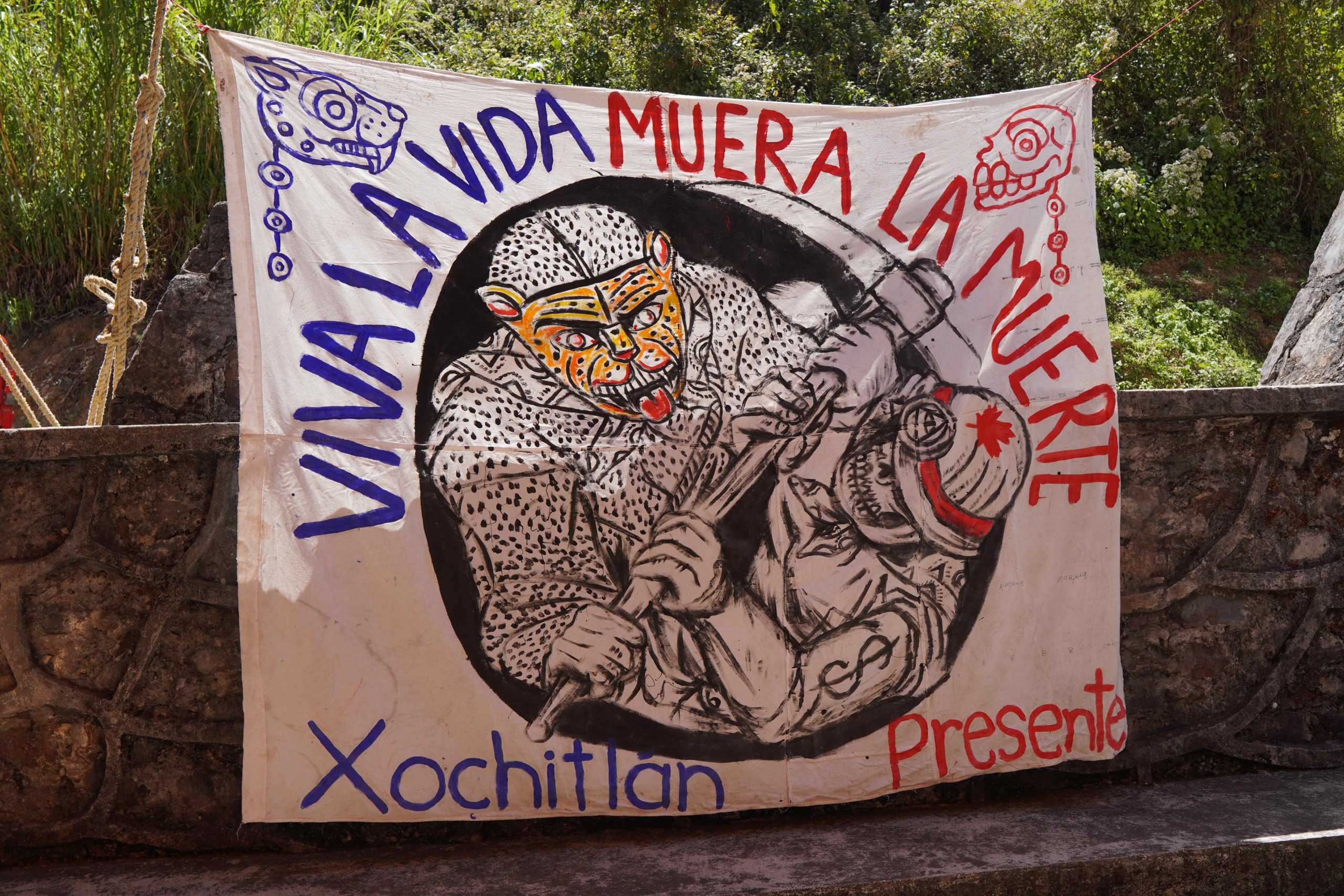 The Fear of Fracking

Despite all of their wins the communities are still on high alert. Miguel talks about the fear communities have of fracking companies coming in. He says their territory is filled with natural gas and that many national and transnational companies are watching them closely.

“Nomas nos apendejamos un segundo y vienen a tomar todo.’ [If we lower our guard for one second, they’ll come and take everything],” he shares.

The Projects of Life

“At the start of all of this exploitation I was very sad. I cried deeply several times because I didn’t know if we would win or not. At the beginning I had doubts if we were doing the right thing, but as consciousness started to rise in our communities, we started to see that we could stop all these mega projects and it gave us more strength.

As a community we are now concentrating on the projects of life that we can build to strengthen our autonomy. We have deep, deep, beautiful dreams of what our communities can become.” Says Miguel.

The Totonaco communities are working with their children and grandchildren to strengthen their language, ‘the root’ of their communities.  “Our language holds our whole world and way of living,” he shares.

“We are also trying to re-learn how to cultivate our lands the way our ancestors did. They had so much wisdom – their herbs were also their medicine and when they spoke of healing they meant healing the mind, body and spirit. As a community we are beginning to recover these techniques.”

Miguel describes how, during COVID-19, the communities began to hear of the deaths happening across Europe and many entered into depression.

“We thought, ‘how will we survive if we don’t have money for all these expensive medicines?’ I was worried above all about my children and grandchildren. But that’s when as a community we began to come together, sharing the different herbal medicines our parents and grandparents had taught us to use. We learned to use different herbs as well as our temazcales [pre-Hispanic sweat lodges] to cure ourselves from the virus.”

Miguel explains that no one in the community died, and that the only deaths were of those who lived in the cities.

“Eating healthy food, breathing fresh air and drinking clean water is the best form of defence. That’s why we are currently building an ancestral clinic in our community that will heal the spirit, mind and body. That is what we, the Totonaco people, want to leave our children, grandchildren and the world. We want to show that another world is possible, a world without chemicals, a world where as we heal our mother earth, we also heal ourselves.”

Miguel shares his dream of the clinic having its own temazcal. “I have a dream that the temazcal will be in the form of the world. One half will be painted like the sun and the other half like the moon. Outside it there will be a botanical garden where we will grow our medicine and across from it we will have our crops that grow our food.”

The communities are also already starting to form their own coffee and sugar cane cooperatives.

His eyes smile and he laughs, “Not even the Pope eats the food we eat. Only, we the Totonaco’s, are lucky enough to live in this paradise and eat the food of the gods. We will continue to protect our lands and waters at all costs.”

The work the communities do to spread legal human rights based education, raise consciousness in their communities and organise themselves to confront these massive industries is an important example to replicate. 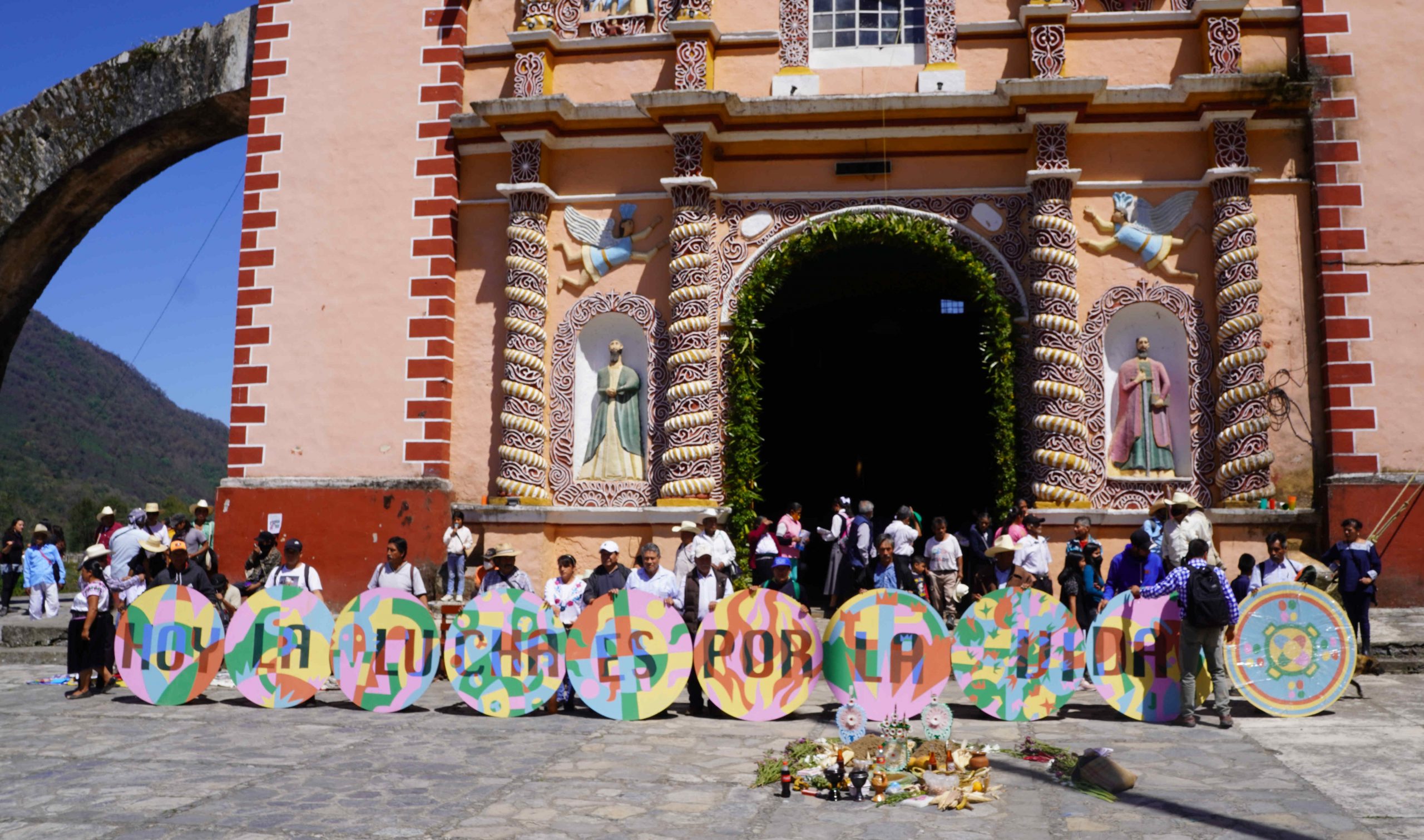 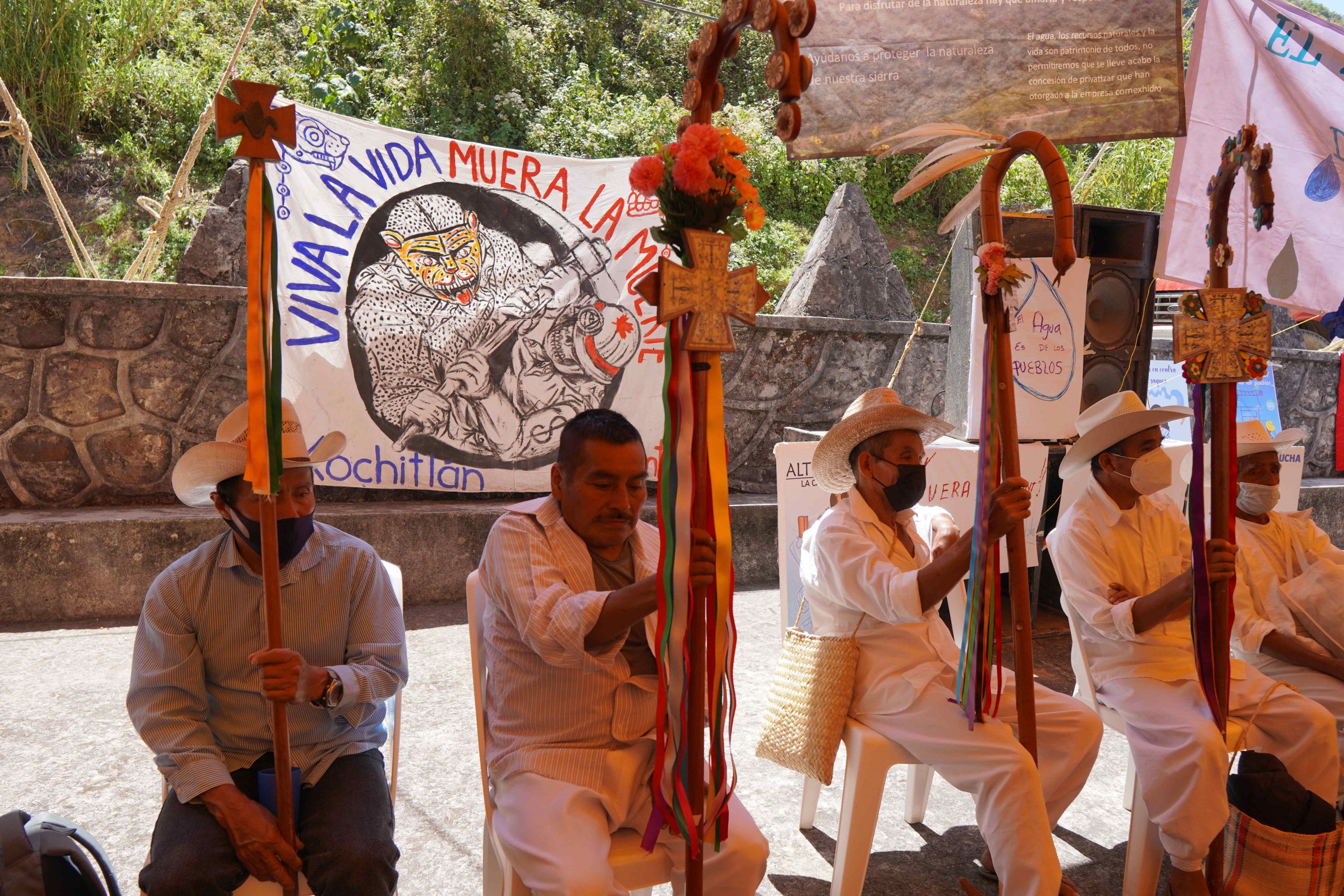