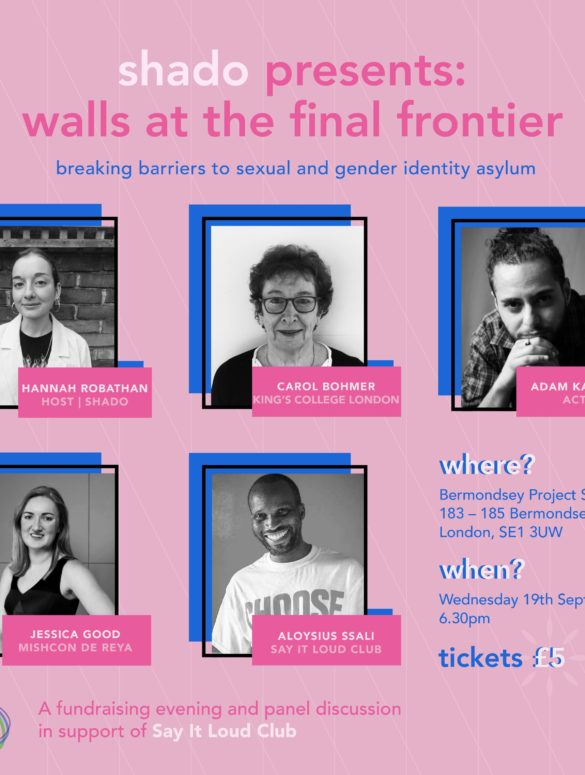 Please join shado for an evening of discussion around the barriers that LGBTQI+ people seeking asylum face in the UK.

The evening is to promote the work of Say It loud Club, whilst raising awareness of the experiences faced by those claiming gender and sexual identity asylum in the UK.

The evening will also act as a fundraiser for Say It Loud Club.

The panel dicussion will mark the end of a 2-week residencey in Bermondsey Project Space in celebration of LGBTQI+ history month. This year, shado is focusing specifically on the experiences of, and barriers faced by, those seeking gender or sexual identity asylum.

The residency showcases a collection of events and exhibition to celebrate the unifying aspects of love without borders.

Aloysius Ssali
Aloysius Ssali is the founder and director of the Say It Loud Club, an organisation that supports LGBTQ+ asylum seekers and refugees based in London.

Aloysius is a lived experience openly gay activist and a charity worker. Shortly after being granted asylum in 2010 on grounds of his sexuality, Aloysius set up the Say It Loud Club as a London based grassroot support group and has used his experience as an openly gay refugee to raise awareness about the challenges faced by LGBTQI+ refugees in the UK. Through social and educational projects, Aloysius talks about the importance of living openly and encourages other LGBTQI+ people seeking asylum and refugees to reach out to the British Government for International protection.

Adam Kashmiry
Adam is a performer, a trans activist, and an inspirational speaker. He has made his professional debut as an actor in a theatre production called ADAM as part of the Fringe 2017. The play won the Fringe First award, the Scottish arts club award and was shortlisted for Amnesty’s international award for free speech. Adam has also won a Herald Angel award for his role in the play. ADAM has toured Britain and New York.
Adam previously appeared in the short film ‘Time for T.E.A’ by LGBT youth Scotland, as well as a small production in the Citizen’s theatre in  2012  called ‘Here we stay’.

Adam has appeared on Tedx Glasgow 2018. He also has a channel on YouTube in which he discusses Trans related topics.

Jessica Good
Jessica is a lawyer in the Immigration department at the law firm Mishcon De Reya. Her clients include individuals and businesses that require advice on a range of UK Immigration matters.
She provides long term strategic advice to clients ultimately aiming for British citizenship. She also advises on human rights and discretionary leave applications, as well as complex asylum claims often involving political persecution.

Outside of the office Jessica also provides legal supervision to paralegals and law students for Pink Law – a LGBTQ immigration advice service set up by the Legal Advice Centre at Queen Mary University of London.

Carol Bohmer
Carol Bohmer is a lawyer and sociologist, is a visiting scholar in the Government Department at Dartmouth College, Hanover, NH, USA and a Teaching Fellow at King’s College, London. She has worked in the area of gender and the law for many years. BioHer current research interests are in the field of migration and asylum. She is the coauthor with Amy Shuman of Rejecting Refugees: Political Asylum in the 21st Century, (2007) and Political Asylum Deceptions: The Culture of Suspicion, (2018), and a number of articles on migration issues.

50% of ticket price goes to support Say It Loud Club