Denmark is a country that defines itself on its progressivism. It regularly tops metrics for the world’s happiest country, the best place to live as a woman, and has one of the strongest welfare states. Historically, the country has been a strong supporter of refugees: it was the first country to join the 1951 UN Refugee Convention, becoming home to thousands from the Soviet bloc, the Balkans, the Middle East and beyond over the twentieth century. Today, immigrants and their descendants make up ten percent of the total population.

However, recent years have seen a marked shift in the country’s attitudes towards immigrants making their homes within its borders. Since the start of 2021, the shift has crystallised into two radical policies, the first of their kind in Europe: revoking residency permits of Syrian refugees on the basis that the Damascus area is now “safe”, forcing them into deportation centres and legal limbo; and the passing of a law enabling an offshore asylum-processing detention facility in Rwanda. Both moves have been widely condemned by EU officials, international human rights organisations and local activists.

Rihab Kassem, pictured, is a 66-year-old Syrian-Palestinian woman who came to Denmark as a refugee in 2013. She was injured with poisonous gas in a Syrian regime airstrike, leaving her lungs at 35% working capacity, and was due to get an operation in Denmark. Danish authorities gave Rihab a residence permit valid for five years; when the initial period was over, they extended it for two years and told her she could later apply for permanent residency. When she tried to renew her permit, she was informed that her permit was revoked. She can now no longer get the operation, since she’s not entitled to government healthcare, and is facing expulsion from the country in the beginning of July.

“I have no one, nothing, in Syria… All of my family lives in Denmark and I’m the only person who was asked to leave”, said Rihab. “We are not beggars here, we work hard, we go to school, we pay taxes and this is happening to us… I cannot understand it.”*

Rihab is one of at least 380 refugees who have been informed by the Danish Immigration Service that they will have to return to Syria following a report that declared Damascus and the surrounding areas “safe to return to”. Earlier this year, the Danish Integration Minister Mattias Tesfaye stated that “the conditions are no longer so serious that there are grounds for granting or extending temporary residence permits”, continuing that “we are ready with a huge bag of travel money for those who have to go back”. Due to men remaining at risk of enlistment to military service, it is largely women, children and the elderly whose residency permits are at risk. Many have appealed and are waiting for their cases to be finally decided, but at least 39 – including Rihab – have already received final rejections.

Eleven of the experts consulted for the review of the security situation in Syria that the government has used to justify their findings have since spoken out, claiming their report has been misconstrued. “We do not recognise our views in the subsequent government conclusions or policies, and neither do we consider that Denmark’s Syrian refugee policy fully reflects the real conditions on the ground”, they wrote in a joint letter. “Damascus may not have seen active conflict hostilities since May 2018 – but that does not mean that it is safe for refugees to return to the Syrian capital. Many of the key drivers of displacement from Syria remain, as the refugees fled, and continue to fear, the government’s security apparatus, arbitrary arrest and detention, torture, military conscription and harassment and discrimination.”

Despite this year marking a three-decade low in numbers of asylum seekers applying for residency – 1,500 applications with 600 granted – the government has announced a national target of zero. At a packed-out demonstration in Aarhus in May, Danish-Syrian activist Rahima Abdullah spoke passionately against the figure. “When the prime minister says that ‘the goal is zero asylum seekers’, it’s as if to say that ‘the goal is that Denmark should never know anything about solidarity’.”

Since Denmark has no diplomatic ties with the Assad regime, it cannot carry out forced deportations; asylum seekers are left with the choice to either return voluntarily or face limbo in a deportation centre. Deportation centres in Denmark have received high criticism from the Council of Europe’s Committee for the Prevention of Torture, who lately produced a report that labelled Ellebæk in North Zealand one of the worst facilities of its kind in Europe, and “incompatible with human rights”. Residents are stripped of their ability to earn an income, study or work, with one centre allowing only 30 minutes of daily access to outside exercise. In another camp, detained migrants who were found in possession of a mobile phone had to be punished by law with at least fifteen days of solitary confinement; in another, migrants at risk of suicide were placed entirely naked in an observation room. The leader of the delegation who visited the centre, Hans Wolff, called into question “the will of Denmark” to make living conditions in the centres so poor, considering its otherwise largely reputable human rights record. When questioned by the parliamentary immigration committee, immigration minister Mattias Tesfaye defended the measures as “necessary in relation to ensuring an efficient deportation system”.

“It beggars belief”, wrote Amnesty International’s Europe Director, Nils Muižnieks. “Placing refugees in return centres indefinitely, without access to work or education, puts pressure on them to return. Forcing them back to Syria, even indirectly, would put them at real risk of torture and other serious abuses and would constitute a violation of international law”.

Concerns over the exportation of asylum responsibilities have been further compounded by the recent passing of a legislation that allows the Danish government to relocate asylum seekers to countries outside the European Union while their cases are reviewed. “If you apply for asylum in Denmark, you know that you will be sent back to a country outside Europe, and therefore we hope that people will stop seeking asylum in Denmark,” said government spokesman Rasmus Stoklund. The move has been highly criticised by both the UNHCR and the European Commission, and may face legal challenges.

Michela Pugliese, Euro-Mediterranean Human Rights migration researcher, told the New Humanitarian that “there has been a huge shift from a focus on inclusion and integration of refugees to emphasising the short-term nature of the protections and the need to return at the earliest opportunity”. She points out that while Denmark’s decision is the most extreme, it fits a broader trend across Europe. “Member states have been giving inferior forms of protection when they should be giving refugee status because they are trying to limit the amount of time that they host them.”

“Dear Danish people,” Rahima Abdullah concluded to the crowd gathered in Bispetorv Square in Aarhus. “Where are we heading? What country do we want to be? Which Denmark do we want to show to the world? What future do you want for the young people who are in the process of an education and get rejected? For those children who cannot speak a language other than Danish but are about to be deported to a country that is in fact foreign to them? What is your wish for the adults who came to Denmark and started a new life here after their old lives were destroyed by the war? This is not only a question of what foreign policy should be pursued but also a question of values ​​and solidarity. This is no longer about politics; it’s about ethics.”

In conversation with Cheryll

*Rihab’s story has been covered in depth by my brilliant colleagues Amanda Magnani and Fernanda Seavon, who are currently pressuring the Danish government to reverse the decision. Keep up with the case through their social media, @amandamagnani and @fernandaseavon

Translation: Do you think women and children are safe in a brutal dictatorship? The government thinks so!

Translation: We fled not only from bombs but also from the brutal regime! 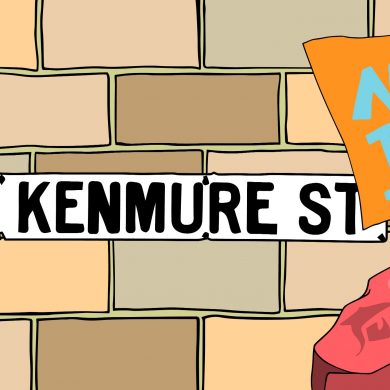 Kenmure Street: a rally against the “good” / “bad” migrant narrative