What is seed sovereignty?

An introduction to resources, key leaders and why seed sovereignty is a global issue

What is seed sovereignty?

To understand seed sovereignty, it’s first necessary to understand why seed is so important. Seed is the basis of all life. For thousands of years, farmers have been cultivating seeds, selecting and saving them each season for their resilience in local climatic conditions, as well as for their yield, their flavour and their nutrition.

Because of the intergenerational practises of seed savers around the world, we have diverse varieties that can thrive in a rapidly changing climate and with the natural resources that farmers have around them. And because seeds embody the qualities that communities value most, they carry more than just that biodiversity – they carry culture, as well. The free exchange of seed is what provides communities an affordable way to sustain their health, heritage, and livelihoods.

Seed sovereignty, in its most basic form, is the “right of a farmer to save, use, exchange and sell their own seeds.” But why would such a right be necessary? What is preventing farmers from freely exchanging seed?

Why is seed sovereignty a global issue?

Before the second half of the twentieth century, this collective right to seed was largely unquestioned, so much so that the language to describe it didn’t really exist. But the rise of intellectual property rights in recent decades has given corporations the capacity to strip this right from farmers around the world.

That rise began with the introduction of corporate hybrid varieties, which unlike farmers’ seeds, are designed to have desirable traits that die off after subsequent seasons. This forces farmers to purchase seeds – and the harmful chemical fertilisers and pesticides needed to grow them – each season, creating dependency for the farmer and profit for the corporation.

Intellectual property rights gave corporations the ability to claim ownership over their “inventions,” despite the fact that the only reason they were able to create their hybrid varieties was by first starting with farmers’ seeds. The US’s 1930 Plant Patent Act and Europe’s introduction of Plant Variety Protection provided mechanisms to assert that corporate plant breeders, not farmers, are the bearer of seed rights. This steadily began to erode farmers’ capacity to save and exchange seed.

The emergence of the Union for the Protection of New Plant Varieties (UPOV) in 1961 signalled the move to standardise these laws through an international treaty (the UPOV Convention), and force countries around the world to adopt this legislation. With successive revisions in 1978 and 1991, UPOV has effectively created a global system to criminalise and punish farmers for their traditional seed saving practises. Today, UPOV is imposed on countries as a condition of World Trade Organisation membership or free trade agreements, meaning that almost all countries have this patent-like system that regulates seed.

These intellectual property rights mechanisms have allowed a small handful of corporations to control the vast majority of the seed market. Today, just four companies control over 70% of the global seed market, which will be worth US$92.35 billion by 2025. These corporations have disproportionate power over farmers and are able to shape legislation in their favour, creating dependency where once farmers had near-total self-sufficiency.

The result of this consolidation has been a stunning erasure of seed diversity. Unlike farmers’ seeds, corporate seeds are not locally-adapted and can’t grow without harmful and expensive chemicals that degrade soils over time and trap farmers in debt. The erasure of seeds is the erasure of biodiversity, and has threatened the health and rights of our communities and our planet.

The reclamation of seed sovereignty means confronting and dismantling global systems of power and control. As such, the movement must be global.

Who are some of the key leaders in this movement?

Where is the movement heading?

More and more groups are uniting to reclaim their seed sovereignty and challenge the hegemony of seed corporations. There’s a significant push “re-commoning” of seeds – in other words, returning to collective ownership over seeds back to communities. Re-commoning looks like pushing for the re-localisation of seed systems, restoring the capacity of communities to set up community seed banks where farmers can freely access and cultivate seeds season after season. This ensures that seeds can continue to adapt to changing climatic conditions and exist as living, breathing bodies of culture.

On the legislative side, there are several groups including La Vía Campesina and GRAIN, who are leading the charge to confront treaties like UPOV.

Through these two channels – the grassroots reclamation of seed and the legislative fight – the movement is working to loosen the chokehold that corporations and governments have over seed. 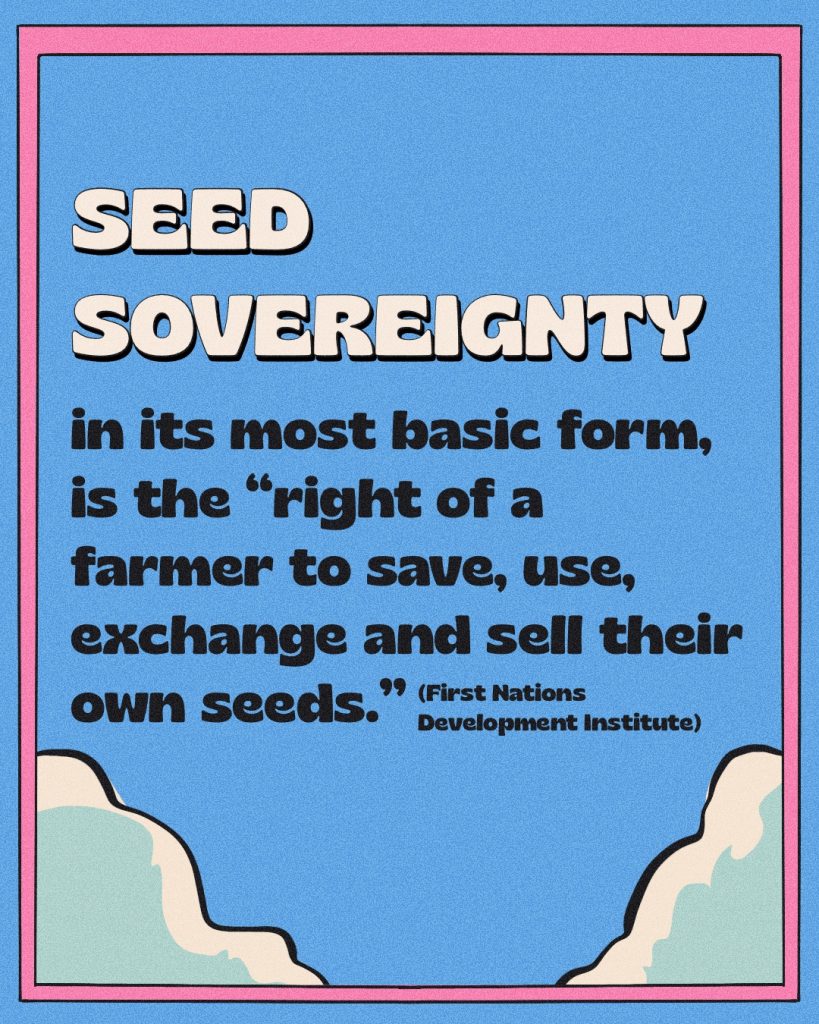