“We need to normalise the idea that it’s okay if you’re only just coping.”

in conversation with Alex Leon

In February 2020, shado hosted Build Love, Break Walls, a two-week residency in celebration of LGBT History Month. As part of the exhibition, we spotlighted 12 of London’s LGBTQI+ changemakers. shado’s co-directors Hannah Robathan and Isabella Pearce sat down with one of these changemakers, Alex Leon, to find out more.

You work for Kaleidoscope Trust, a charity that supports LGBT+ activists across the world, many of whom are fighting against the criminalisation of homosexuality. How does your work at the charity inform your writing and the types of stories and issues you are trying to spotlight?

I’ve always tried my hardest to keep them separate, because the nature of LGBT+ rights is that it’s very localised to its context. The writing and campaigning I have done in the UK has been on very specific issues which I have felt needed a focus within our community: poor mental health (particularly among queer people of colour), sexual health for gay and bisexual South Asian men, sexual racism and hyper-sexualisation in the gay community – but these issues won’t and don’t resonate for LGBT+ activists in different countries. Often the types of conversations I am trying to have in my writing and activism are vastly different to the conversations I am having with LGBT+ activists across the world as part of my day job. They are all at different junctures in their journey towards achieving LGBT+ equality – they might be trying to decriminalise homosexuality, or educate the public to break down the taboo surrounding their community, or something else that their community is focused on.

That said, one of the things I am constantly inspired by is the intersectional and decolonial approach that many of my colleagues across the world take when they approach their activism. The vast majority of queer people still living in countries that criminalise homosexuality or actively persecute LGBT+ folk are black and brown – this is a fact which is so often overlooked. And what’s more, the discriminatory laws they are often trying to dismantle are relics of colonial rule – laws inherited directly from European colonisers. The UK has a big role to play here – over 30 of the 70 odd countries which still criminalise homosexuality do so because of discriminatory colonial laws. And so, the activists I’ve worked with carry this intimate understanding of how their ethnic identity and the colonial period impact on and interact with their LGBT+ activism – something which I think we’re only just catching up to in the UK.

How much does your activism come into your writing?

For me, writing can be a form of activism. Whether you’re a journalist shedding light on stories or issues that have typically been excluded from the mainstream, or an author creating marginalised characters that challenge narrative tropes – all of this constitutes activism. I began writing because I wanted to create my own media. What was being touted around me never felt relevant to me. I would read novels that were searing and emotional but they were always centred, without exception, on people and premises that I couldn’t relate to – mostly white heterosexual people. The issues I cared about, my perspective…

my story was something which was never reflected back to me in the media that I consumed growing up, so I got really good at re-contextualising the things I read to make more sense to me.

I guess I got to a point in my adult life where I realised that I didn’t have to do that anymore, and that I could be a part of the solution – write about things I cared about that often reflected the unique struggles of me and my community. So I began doing just that – centring the issues faced by queer people of colour, myself included. And it has been this writing, alongside my work at Kaleidoscope Trust, my campaigning, and my volunteering that made me think – hey, maybe this is activism. Maybe I’m an activist now. And I haven’t looked back.

How do you think the pandemic and self-isolation has impacted on wellbeing and mental health within the LGBTQI+ community?

I think it’s fair to say that the pandemic is having a widespread effect on all of our mental health, irrespective of how we identify or the unique pressures associated with the intersecting identities we all hold. But I think the issues affecting the queer community are manifold. On one hand, self-isolation has forced a lot of queer people into living situations with people who actively invalidate or question their identity, which can have staggeringly bad effects on your wellbeing. Many of us are being forced out of spaces where we feel free to express ourselves authentically, and into spaces which in some ways replicates the oppressive environment of the closet, and that can be a really difficult experience to re-live, even momentarily during a pandemic.

Secondly, I think many LGBT+ people have a tendency to be deeply self-critical, which is often a hangover from the closet. We’ve faced so much judgement from other people in our lives that we’ve internalised it, with many of us failing to be kind to ourselves in our time of need. And self-isolation is exactly that – a time of need. The pandemic is creating a lot of stress for all of us, whether that be instability in our home or work environment, difficulties with our health, money trouble – these are uniquely stressful events and many of them are happening concurrently.

In this bizarre and difficult time, more so than ever, we all need to be kind to ourselves, not judge how we decide to cope with all of these difficulties, and broadly not criticise ourselves for how we might be feeling. And my reflection would be that LGBT+ people tend to struggle with that a bit more.

Is there anything you’ve learned or observed from isolation in terms of
society and the ways in which people are responding?

To start with the most heartening, I think people are being creative in the ways they stay connected, which is really commendable. I’ve been taking part in group yoga, pub quizzes, online games – it’s really heart-warming to see that human ingenuity in such challenging times – people are stepping up and creating opportunities to connect, and what’s more, they’re opening up those opportunities online to people who might not be within their immediate friendship circle.

But it’s fair to say that self-isolation is really tough – I’ve seen some friends fully withdraw into their shell, others really struggling to stay afloat in a context where they can’t socialise in the ways they’ve become accustomed. I’ve seen people’s relationship with the media change – I have some friends who have begun to obsess over the rolling media coverage of the pandemic, to the point where they’re probably too informed, and conversely I have other friends who’ve completely disconnected from the media altogether, ostensibly in an effort to preserve their sanity.

Self-isolation is also putting pressure on our relationships, whether that be with friends or partners. Those who are isolating together are adapting to a living situation where they are essentially on top of each other, and those isolating apart are having to be more intentional with their communication. The terms of our relationships are shifting, and we’re being forced to adapt, even if we don’t want to!

When it comes to coping mechanisms during COVID-19, you’ve authored a
brilliant piece on Medium where you rightly note that “sometimes we reach
for the practical, and in doing so, betray the emotional.” What are some of the
problems you can see in people calling for greater creativity in isolation?

I think what the piece was trying to impart was that often we treat mental health and wellbeing through a practical lens – we see poor mental health as a problem to be fixed, and so we go about fixing it without even always fully understanding the problem. In the case of our collective poor mental health during the COVID-19 pandemic, that has meant that many of us are reaching for practical salves to our pandemic-induced anguish without fully taking in or understanding the reasons behind our anguish, nor allowing ourselves to sit with it, interrogate it, and perhaps even accept it as a perfectly human reaction to a wide-scale global health crisis which has dramatically interrupted our normal way of life.

I think people are putting pressure on themselves to be able to quickly adapt to or even capitalise on this new way of life and getting frustrated with themselves when they inevitably fail. And I would advocate that not being able to rapidly adapt to changing (and stressful) circumstances is not a character flaw, but a totally normal reaction to what is going on. Lying in bed all day and eating junk food while you contemplate how you are going to pay your rent (an example taken from my own life!) may not be the most practically useful way of coping, but it’s giving your brain time to process what is happening that it perhaps needs. And we shouldn’t be placing judgement on that, or telling ourselves that we should be learning how to play the guitar, or rearranging our bookshelf instead.

We need to normalise the idea that it’s okay if you’re only just coping.

In light of this, what are some of the biggest challenges you are personally
facing, and how are you trying to overcome them?

Like many others, I’ve been swept up in the desire to be more productive, to learn a new skill, to somehow optimise the increase in my free time. I don’t think that this desire is inherently bad, many people do feel like they’re in a position to capitalise on their free time while in self-isolation, but I’ve been trying to not put pressure on myself to treat this period of isolation as mandated self-improvement time. We are always putting pressure on ourselves to be better, to do more – and for once I am trying to challenge that internal narrative.

I’m also an immigrant, so many of my family and close friends are abroad, which has been tough in a time of such immense uncertainty. To rectify that I’ve been staying even more connected than normal, constantly calling my loved ones just to check in, even if it leads to a fairly inane conversation. They’re probably sick of me by now! Ultimately though, it helps me feel less far away, and I think it’s important to remind ourselves that being isolated doesn’t mean we need to feel alone. 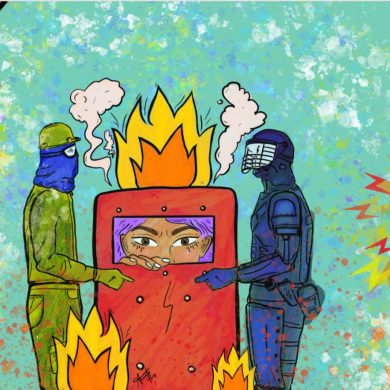