The way that coronavirus has advanced in Brazil has repeated a pattern already seen worldwide. The only difference is: our president is killing us. The COVID-19 pandemic advance data is very similar to what has been produced in alerts by WHO, the World Health Organisation. The world has watched this pandemic progress, and continues to repeat the same mistakes by ignoring the severity and complexity of the situation.

It is not necessarily useful to compare the progress of the pandemic in different countries.
That said, Brazil had the opportunity to deal with the situation – however complex it may be – with the gift of foresight by learning from the results of countries that grew their curve in a similar way as France and Italy. The most effective preventive alternative to combat the virus from spreading is still social distancing, and its effectiveness is fundamentally associated with adherence by the population with clear and effective recommendations from the authorities.

This is where it gets complicated for a country with continental proportions like Brazil, in times with a government that neglects making effective protective decisions on behalf of the population. Here, states and local governments have, on their own, attributed many of the rules for social isolation, health control and social support for the population. There is an unrestrained increase in cases of COVID-19 in many of the states; the Ministry of Health confirmed 1924 deaths by April 17th. As you read this text, that number is already out of date and worse, thousands of other deaths that have never been diagnosed need to be considered. And believe it or not, the health minister was fired for political conflicts with the president in the middle of the pandemic.

Last week, in which more than a thousand people had their deaths confirmed, President Jair Bolsonaro continued disrespecting guidelines from the WHO and the Brazilian Ministry of Health by going to the street, scratching his nose with his fist and greeting people, including elderly people. This behaviour corroborates his latest presidential pronouncements in which he criticised self-isolation; suggested the reopening of schools; and treated the disease like a “simple flu”, making statements like “Nobody’s going to get my right to come and go” in public appearances.

This series of attitudes by the nation’s President led to a scenario where adherence to isolation fell. Much of the population has ignored calls to stay at home, especially after these statements by the federal government. The State of São Paulo government, for example, has been conducting social monitoring that points out that less than half of the population has respected the period of isolation.

Cities like Manaus, a Northern capital in the country, already has all its ICU beds occupied, and with numbers of burials growing exponentially, this has terrified the population. Overall, the country has also been doing fewer tests than it should: April 16 data shows more than 30,000 confirmed cases, apart from tests that have yet to announce results.

Here in Brazil, COVID-19 has been lethal and has disproportionately affected the Black population. According to reports from the Ministry of Health, although the Black population has fewer records of those affected by the disease: 1 in 4 hospitalized Brazilians is Black. Further data in the same report points out that 1 in every 3 people killed by the coronavirus are also Black.

The epidemic in Brazil was brought by an elite who is mostly white. The key to understanding this situation is that the spread of COVID-19 is inherently linked to social issues. A major proportion of the Black Brazilian population lives on the outskirts, which do not have the minimum structures necessary to practice social isolation effectively: lack of access to water and sanitation, racial inequalities such as poor housing conditions and inadequate food. These conditions generate even more vulnerability in maintaining health and will continue to impact the pandemic as it continues to spread.

This is a very serious problem that the country needs to be decisive in resolving. How can we expect the peripheral population to wash their hands in times of a pandemic when there is no access to water for them to use? The spread of the pandemic is facilitated in slums and neighbourhoods far from urban centres in all regions of Brazil.

Bracing for the ‘double dose’: Experiencing COVID-19 while living near oil and gas development

Meanwhile, many social initiatives are attempting to run a race against the clock to help fight the virus: fundraising projects to donate to public hospitals, artists performing live performances on social media to collect food and hygiene materials for vulnerable communities, non-governmental organisations distributing hygiene and cleaning kits.

This is the scenario in Brazil, which people, starting from – and above all – the Federal government, need to understand. Nobody should be left behind. The COVID-19 pandemic has made even more visible the inequalities and social conflicts that we face and have been here for years, this has caused us many reflections on how we live and place ourselves in society. We have an opportunity to change the exclusionary system we live through, through activism and collectivity and most importantly, we have a duty as citizens to use those tools to show through facts and science that the government is not acting as it should.

Please take care, stay home and help each other. 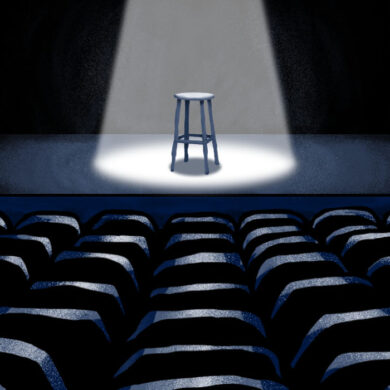 “BORIS, DON’T BE THE GUY WHO LET THE MUSIC DIE” – Save Our Scene