In an attempt to provide some relief during these uncertain times, shado has launched the Lockdown Listening series, where we will be releasing a weekly playlist in collaboration with some of our contributors and musicians, hearing about how they are coping and what they are currently listening to in lockdown.

Our second playlist has been created by the members of Sports Team who recently featured in our Free, Safe, Legal, Local pro-choice t-shirt campaign.

When Sports Team signed to Island Records last year, I did a victory lap of the office. It’s not often you get to work with such a rambunctious group of people; all singular characters, a member for a pint every day of the week, with one much-needed day off in the middle to recoup – you can never quite catch up after a Sports Team marathon.

Sports Team started life at a university party. Their first ever gig was crashing a pal’s birthday and they soon realised through passion, desire, friendship, hunger, talent, and a penchant for off-kilter live experiences they had a winning method.

Their live experiences have set them apart from the rest of what the industry likes to call the ‘alternative (not indie) scene’. There are so many moments with the band I can pinpoint as life-affirming, or life-endangering. Their annual Margate coach-trip; where they invite 70 friends, fans and journalists on a double-decker bus from London to Margate, is the best and worst of times; like a school trip with your best mates that’s going to start and end badly. Cheap beer and burgers on the seafront, followed by a basement gig of indie’s (sorry alternative) creme-de la-crème, followed by more drink, more music, and bedlam.

There is true joy in reliving your youth with a band like Sports Team. Watching young fans lose their shit; front row at the Scala headline with a papier-mâché shark hanging from the ceiling, or lead singer Alex crowd-surfing in a matador suit at Electric Brixton, to the fervent chat in their community WhatsApp group (mainly laughing at the expense of the six), you can become fully immersed and consumed by this band of brothers and sister. Not to dwell on a gender debate in this introduction – but notable mention to drummer Al the only woman in the band, and one of the most intelligent, exceptional humans I have met – the mutual level of camaraderie between band members and their fans, and lifting the veil between art, artist and fan, can be felt unequivocally. Bickering one minute, laughing the next, astute banter for miles (you’ve got to be quick to keep up), pints, more pints; Sports Team are a mad family you want to be adopted by. Pack up your bags and leave home kids.

Being a publicist for so many characters is a blessing and definitely not a curse. I’ve looked on in beguilement at Alex commandeering a canal boat in a Gucci suit; the whole photo team gasping at the scandal, have forced the whole band to wear repurposed football kits on set (no matter how tight the shorts were) while dancing to the Rembrandts I’ll Be There For You. Watched Alex and Rob nerd out as they sit next to music royalty Robyn at the NME Awards, and give fans in the pit free pizza and pints, all while engaging in sharp chat that leaves you enthused and chuckling. No day is the same.

Now COVD-19 has upended the very essence of a musician’s livelihood and love: playing live to fans. Nearing the release of what should be a landmark, joyous occasion: the Deep Down Happy debut album drop on 19th June (the album title now pertinent as the world is forced to think about what makes them deep, down, happy), Sports Team are at home, self-isolating, and awaiting the day to celebrate with their extended family. One thing this band do is everything in good humour, and remain indefinitely optimistic about the powers of music. If music is the great healer, then Sports Team are a bloody good band-aid.

How have you been coping with lockdown?

I’m generally not someone who enjoys spending time on my own or at home so it’s been a difficult adjustment period but trying to focus on the positives of having a lot more time; to myself, and to reflect on what has been a brilliant, but pretty hectic couple of years.

What does an average day look like for you at the moment?

I’ve been trying to keep something resembling a structure during “the week” I exercise every morning, do a bit of drum practice (on a snare pad as I don’t have a full kit available), then spend some time reading, writing or doing some languages work. When there are other jobs to do I’ve been working on stuff for the band, doing interviews and volunteering for local services. The rest of my time is very happily filled thinking about, preparing and eating meals.

Has this been a creative time for you? If so, where are you drawing your inspiration from?

It’s been a period of reflection, that I haven’t had for the past couple of years which have been in many ways really transformational for me personally and for the band. In addition to this I’ve read some amazing books (esp. Patti Smith’s Just Kids) which I’ve found inspirational through the subtle shifts they prompt in perceptions of your own experiences. This has impacted bits of writing I’ve been working on. Also, we’ve recently shot our new music video from our seperate locations which has been challenging (propping up the phone in various positions to shoot myself playing half a drum-kit) but I’m really excited to release the final edit!

What are you looking forward to most when this is over?
Being back on the road and reunited with my boys!!

Listen to Sports Team’s playlist below 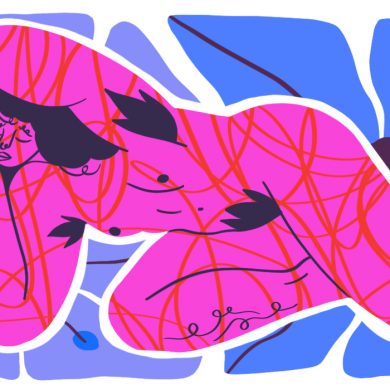