In conversation with the Stubborn Archivist

At a café in Haringey, Yara Rodrigues Fowler assures me that although she lives in North London now, she grew up south of the river. In a smaller town, this point wouldn’t be relevant. But, in London, a city of 8.8 million people, where postcodes represent key signifiers of identity, cryptic combinations of numbers and letters – NE, SW, 1, 12 ,3, 16 – are more important than they seem.

Yara is acutely aware of this. In her debut novel, Stubborn Archivist, the writer explores affection for place through the story of a young Brazilian-British woman growing up in Tooting, and the book follows this main character as she grapples with her identity in a number of settings – from London, to São Paulo, to Heathrow’s Terminal 3.

Though Stubborn Archivist is only Yara’s first book, it has already received a great deal of buzz in the literary world, with a number of major British publications, from Vanity Fair to The Observer, tipping her as a young novelist to watch. That said, in addition to being a writer, Rodrigues Fowler is also a trustee of Latin American Women’s Aid (LAWA), an organisation that runs the only two refuges in Europe for and by Latin American women, and three years ago, she made headlines when she created a bot to encourage people to vote on Tinder.

In a rather fitting turn of events, I first read Stubborn Archivist on a flight to Brasília to visit my family. Sitting in a tragically uncomfortable middle seat, I heard people open and close their overhead bins, and briefly looked up when the drinks trolley came and went. Still, my eyes were, for the most part, glued to the page. The realisation that someone else’s life resembles your own often brings about a strange sensation. At first, it feels almost intrusive, knowing another person understands what it’s like to be in your head. But, when you notice it’s happening, it’s impossible to look away.

Reading Yara’s chunks of untranslated Portuguese in Stubborn Archivist felt like an invitation to readers like me, who have always thought of words in clusters of mixed pairings. That her clusters often resembled my own was even more shocking. They felt comfortable and familiar. But, it was also more than that. In mixing both languages, Rodrigues Fowler demonstrates that she gets something only those of us with multiple identities have truly experienced: it’s entirely possible to live your life in the in-between.

Indeed, Yara, like many of us hybrid-somethings, seems to understand that home can be many places all at once. Yes, home is where the maracujá (passion fruits), mangas (mangoes) and cajús (cashew fruits) are; it is rolling brigadeiros and listening to tropicália. But, home is also the night tube and my flat in Camden. In Stubborn Archivist, Yara observes that sometimes, very rarely, home is even in the grey spaces; in airplanes, and airport terminals, or somewhere in “the big open bellied loneliness of the Atlantic”. When you have trouble understanding where you belong, being nowhere can feel almost comfortable.

At the café, Yara smiles when she tells me the decision to include writing in both languages was a subtle privileging of readers like us. I tell her that perhaps a little selfishly, I’ve always longed to experience the feeling of relating to specificity, and seeing myself reflected back to me in a text. In reading Stubborn Archivist, I think finally got it. Though she maintains the book isn’t autobiographical, Yara also shares a few similarities with her unnamed protagonist. Like her character, she too is a Londoner born to a Brazilian mother and an English father, accustomed to juggling identities, languages, and last names.

When Yara and I first meet on a cold, rainy morning, she is dressed casually, bare-faced in a grey coat. In the yellow light of the café, she greets me with a hug, and offers to buy me a croissant. Her voice is neither soft-spoken nor loud, but captivating nonetheless. It has a measured tone that beckons you to listen closely.

As we settle into our seats, we discuss her recent move. “This is actually my first grown-up house,” she declares matter-of-factly. Prior to meeting me, she’d been building shelves and drilling into walls. I acknowledge that having a landlord that lets you drill into their walls is a surefire mark of adulthood. It means they trust you.

Yara agrees with me. In fact, she tells me her landlord knows she’s a writer, and loves the book, which I don’t find surprising. The past couple of months have been great for Yara, and though Stubborn Archivist is her first book, she has already been shortlisted for the Sunday Times Young Writer of the Year Award and longlisted for the Desmond Elliot and Dylan Thomas prizes.

“Go home FT, you’re drunk!!” she wrote in one of her Instagram captions when the publication put her on their list of 30 of the planet’s most exciting young people last year. Yara is funny in a quirky, self-deprecating way. When I ask her about the FT list, she gently deflects the compliment, and jokes about being on it alongside teen pop-star Billie Eilish. “She makes me feel old,” she says, laughing.

The praise Yara has received for Stubborn Archivist is a testament to how good her writing is. But, it’s also indicative of the British media’s endless fascination with the plight of the multicultural novel, and the writers who create them. This fascination began two decades ago when one of Yara’s literary idols, Zadie Smith, published White Teeth, a story about two friends – a Bangladeshi man and an Englishman –and their families’ intertwined lives in Willesden, and continued into the early 2000s with the success of books like Monica Ali’s Brick Lane.

At the time, the media was enthralled by Smith, who was quickly hailed the “Ambassador of Vibrant Multicultural London”, as journalist Sophie Elmhirst put it. But, at the turn of the millennium, multiculturalism was not only seen as a desirable goal, it was also a public policy.

Somewhere along the line, though, things changed. In 2011, 5 years prior to the Brexit vote, David Cameron famously declared that state multiculturalism was a failure, suggesting that Britain needed a stronger national identity instead. In this context, 20 years after the publication of White Teeth and 9 years after the alleged ‘death of multiculturalism’, what do we make of a novel like Yara’s?

At the café, it’s clear that multiculturalism still thrives, at least in the everyday milieu. Around us, people speak a mix of different languages, some of which I don’t even recognise. A cumbia beat plays faintly in the background while a quiet, middle-aged man in a suit devours a buttery croissant. In London, where people share multiple identities and homes, it shouldn’t come as a surprise that many of us find solace in complicated narratives like the Stubborn Archivist’s. Multiculturalism isn’t ‘dead’, it has just been maligned.

After taking a long sip of Earl Grey, Yara speaks of one of her homes – not Haringey, not Wandsworth, but Brazil. In writing Stubborn Archivist, she wanted to explore the “myths about Brazil in Europe, as well as the myths about Europe in Brazil”. Yara is fascinated by the relationship between both places.

How gay is gay enough? The failings of the U.K. system for its LGBTQI+ people seeking asylum

When I ask her how she thinks the English see Brazil, she acknowledges all the usuals: “the crazy, sexy women”, “the parties, football and cocaine”, but believes Jair Bolsonaro has shifted people’s perceptions. We agree that British people are starting to realise that Brazil, like the UK and the US, is also plagued by structural race and class issues.

Yara explains that she wanted Stubborn Archivist to introduce “a conversation about white, middle class families in São Paulo… about how they deal with race and their idea of Europe”. Nonetheless she worries that “English people are not awake to the Brazilian class politics in the book”.

This kind of cluelessness isn’t one-sided though, and Yara reflects on the other side of the dynamic too. We talk about the musician Caetano Veloso, who spent time in London in the early 1970s when he was exiled by Brazil’s military dictatorship, and Yara draws attention to a song he wrote at the time.

In ‘London, London’, Caetano sings about a friendly meeting between a policeman and a group of passersby in a breezy tone. Though the song sounds cheerful, the subtext in his lyrics is clear: London was much more peaceful than Rio because in 1970s Brazil, policemen were more likely to greet a group of young strangers with a gun than with a smile. However, Yara questions Caetano’s lighthearted portrayal of London, acknowledging that it was written only a few years prior to some prominent race riots in the city. “It’s really interesting what people see and don’t see,” she points out.

Music – including Caetano’s – has played an important role in her life. Like many second-generation migrants, Yara found a part of herself online growing up. “Suddenly, I was able to listen to a lot of Brazilian songs on my computer and it didn’t even matter if my parents had the CDs or not… It was a huge part of how I interacted with Brazilian culture,” she says. Yara now thinks about the kinds of conflict and trauma present in Latin American art a lot. “I didn’t realise all the music I grew up listening to was super political,” she notes.

Yara became more political herself when she graduated university. “I don’t talk about this a lot but I went to Oxford and it was really horrible,” she admits, “so I graduated and I was in London and just felt really alienated from all of the feminism that I saw in real life as opposed to online”. This is when she started getting more involved with Latin American Women’s Aid, an organisation in London run by and for Latin American women and children fleeing gender-based violence.

Like Yara, Stubborn Archivist is political. Although reviewers often gloss over this key detail, the book is ultimately a story about sexual violence and what it means to live in a traumatised body. Nevertheless, Yara’s depictions of the main character’s trauma in the novel are subtle. “It’s quite tiring to read accounts of pure violence,” she says, acknowledging that she wanted “to create a text that shows that when a bad thing happens, your way of healing might be cracking a joke or laughing”.

In the book, trauma is also conveyed through empty spaces. Sometimes, whole pages are left blank. “I was very interested in how linear narratives get interrupted by the traumatised mind”, she explains. “The realist British novel is obviously a huge inspiration for me, but it’s also bollocks”. In real life, there are no beginnings, middles and ends.

When I ask her about her own plans for the future, she mentions a new book, which she’s nearly done writing. And after that? “I sell all the rights to Netflix, become really rich, give all the money to Latin American Women’s Aid and buy myself a swimming pool. Everyone lives happily ever after,” Yara jokes. Maybe she does believe in happy endings after all. 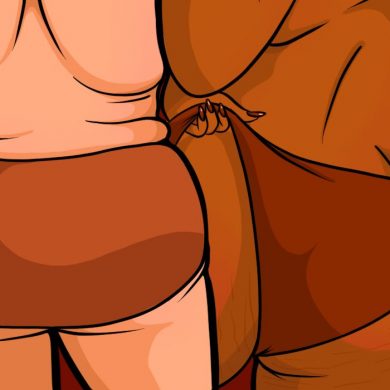 Being fatphobic is not just offensive, it’s racist too