Sitting in my car at the stoplight on the intersection of Canal Street and Loyola Avenue in New Orleans, I observed the continued construction – or rather, deconstruction – of the Hard Rock Hotel that semi-collapsed a year ago right outside of the French Quarter. I shook my head, as I have done almost every day at this intersection since the collapse – at the absurdity, and moreso, at the cruelty and lack of justice of it all. But this time, as I looked up at the structure, I noticed a few billboards propped around it and the buildings on the adjacent street that read:

Up your standards, this isn’t any old cuffing season.

But are they quarantine material?

The yellow and black advertisements of the dating app Bumble added more flamboyance to the already colourful Canal Street. Running a campaign around love in the time of COVID-19, it appears that Bumble placed these advertisements in cities as a reinforcement of the idea that despite the tragedies of the year (and the tragedies are many), this could also be a year of love. It could be. Reading the signage, two levels of irony with this messaging became apparent. One is in the message itself, one of love in 2020, a message that is as ironic as it is hopeful in a year that seems to unravel moments of cruelty and despair across the globe. Everything from the inaccessibility of healthcare amongst underserved and disproportionately impacted populations in the midst of a pandemic to the consequences of racism may be considered universal examples of this cruelty. The other level of irony is in the physical placement of this message: the billboards plaster over a bricks-and-mortar testimony to the power of capitalism and greed – and hence, uncovering the disaster a lack of love can cause. Love, in the context of this article, then, is not Bumble’s love, but rather a synonym for justice, taking after Professor Cornel West’s wisdom, “Never forget that justice is what love looks like in public.”

On October 12th of 2019, the Hard Rock Hotel, a multi-million dollar structure close to completion, collapsed. In the age of social media, videos were uploaded for all to view within minutes. One video showed part of the debris falling on the Canal Street streetcar line as individuals were running out of the way. Another video was taken from within the very same streetcar as the conductor opened its doors for the passengers to escape. Yet another video, circulating a few days later, was taken by a construction worker a day or two prior to the incident and narrated the technical problem with the structure, a grim warning for what was to come.

Ten construction workers, namely immigrants, were injured and rushed off to the hospital; one worker succumbed to his injuries. Questions around lawsuits were quickly posed, and in this situation, one presumes that workers’ compensations, or in other words, the law, would be the means by which West’s notion of justice is served.

Two workers were reported missing after the collapse. Shortly after, they were suspected to be trapped inside the building, with the headlines referring to them as the trapped bodies. These ‘trapped bodies’ were eventually recovered and weren’t laid to rest until almost a year had passed. A third construction worker was injured and deported by Immigration and Customs Enforcement (ICE) agents a few days later. I think of these three men and can’t help but conjure up the images of the three men in Men in the Sun, the late Palestinian author Ghassan Kanafani’s novel which I read in middle school. The story follows three Palestinian refugees leaving Iraq to seek better economic opportunity in Kuwait. They were smuggled across the border in a water tank, but by the time they crossed the border, they had suffocated and died. The readers are left with the question: Why did they not knock on the tank? As an adult, the question to pose becomes what were the conditions, both personal and global, that prevented them from knocking

“No Place for Our Dreams”

The worker that was ultimately deported did ‘knock on the tank’, metaphorically speaking, and served as a witness to the ill-constructed building. However, despite his efforts to hold the law accountable he was branded a criminal in the eyes of the federal immigration court in this so-called land of justice. Again: what conditions, both personal and global, lead to deporting a witness to injustice?

Contributors to injustice and collective trauma – namely capitalism, racism and colonialism – seem to intersect at the site of the Hard Rock Hotel collapse. They create pathways to a lack of love or justice, and allow for incidents like this one to occur. This incident in the city of New Orleans is but one of many incidents proving the power of this intersection. Soon enough, 2020 highlighted the consequences of the power that capitalism, racism and colonialism hold across the globe. Two examples that come to mind include the disproportionate impacts of COVID-19 on communities of colour and Indigenous populations that are exacerbated by structural and living conditions to the warehouse blast in Beirut that resulted from a corrupt government. It is, however, because of the consequences of capitalism, racism and colonialism, which impact the personal, social, economical, political, and environmental issues, that struggles for justice have existed for decades and centuries – everything from the plight of the Native Americans to the plight of the Palestinians. Through these struggles comes a moment of reckoning with these issues that have the potential in creating a conversation that centres a future of collective happiness and ultimately, justice. Love in public, then,–this justice that is sought out – looks like dismantling these systems of oppression, and dismantling these systems of oppression looks like investing in quality education and universal healthcare as a first step.

The other day, as I waited at that same stoplight, I wondered if the billboards went up before or after the last body trapped under the rubble was recovered. Perhaps the greatest irony of the Bumble campaign is in its use of a public space that, in the city of New Orleans at least, is a public site of injustice, to announce that love is possible. It is not a public sight of love as West’s famous quote would describe it. That is what calls for systemic change across the globe are though, -public sights of love – because they are also calls for justice. 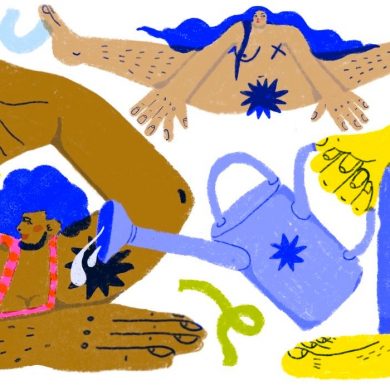 Januhairy: embracing hairiness and its histories